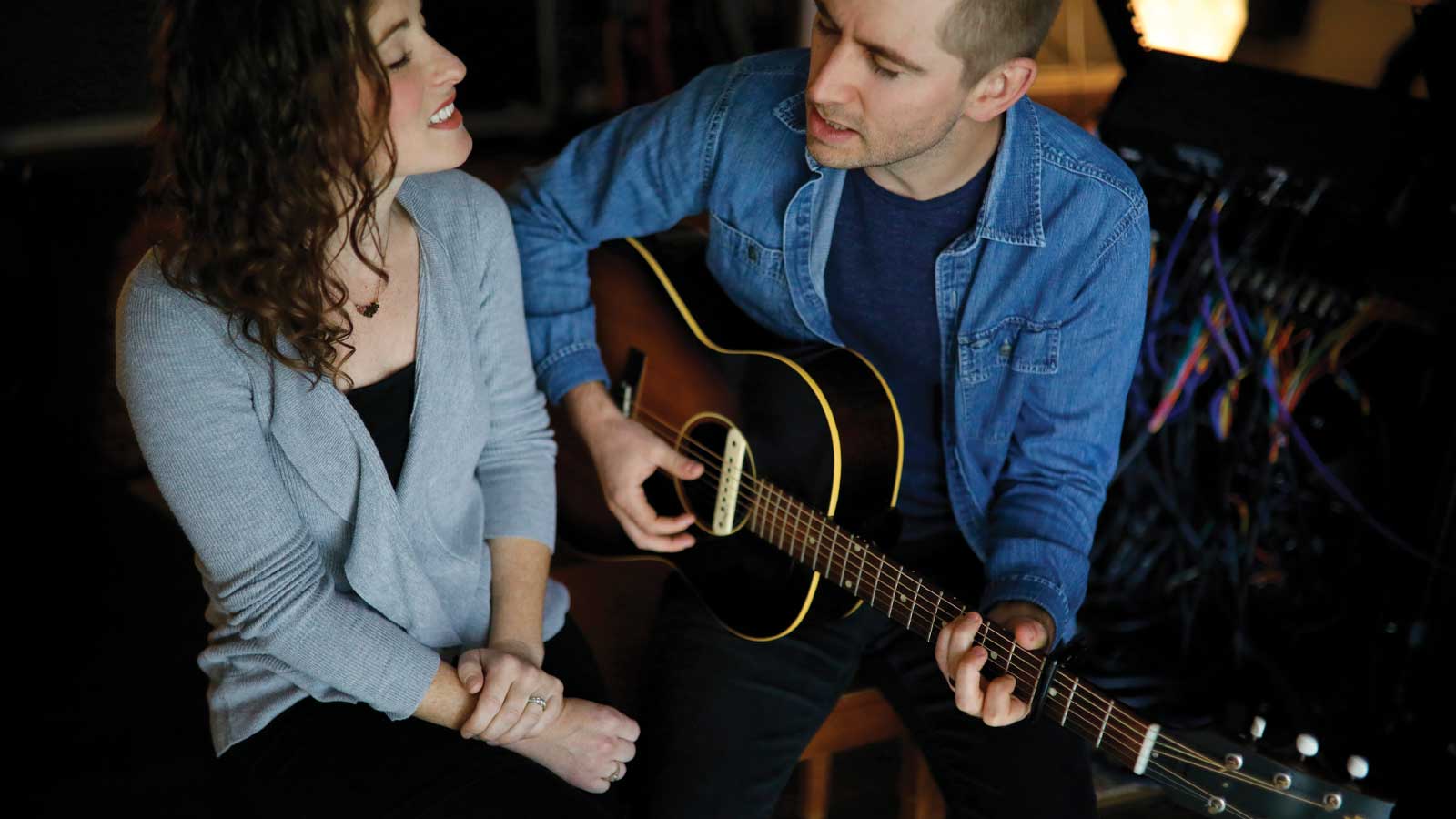 This is a love song.

This is a love song about two local high school sweethearts who went to prom together, married, and had children. But along the way, they drifted apart. Music eventually lifted them out of the pit, and they came together to tell their authentic love story through song.

This is the story of Kristen and Andrew Camp, the Mid-Missouri duo known as The January Lanterns.

“We call it a thick fog that came over our marriage, and it did not leave for a long time,” says Kristen.

Out of that fog came their emergence as a folk duo who played at Roots N Blues for the first time this year, singing harmonies about finding the strength to heal and love.

Bound Together by Music
Kristen and Andrew met at Rock Bridge High School, where they performed together in choir and in talent shows. Kristen recalls that time period with very sweet memories. “We didn’t know what we were doing, but we knew that music drew us together,” she says. “We are complete opposites, so one thing that binds us together is music. We both have a deep love for music and performing.”

After dating for five years, Andrew asked Kristen’s parents for her hand in marriage, and the couple married in January 2011, when she was 22 and he was 21. Nine months after they married, they found out they were expecting their first child. “That was not in the plan at all,” says Andrew.

“We celebrated our first anniversary planning a baby room,” Kristen says. “I cried a lot. My dream as a little girl was to be a stay-at-home mom, but I didn’t want it that soon.”

Kristen finished her master’s program in education at MU and walked across the stage very pregnant, as she describes herself. Andrew was still finishing his undergraduate degree, and their first child, Rae, came to his graduation.

Kristen calls their decision for her to stay home “stupid slash brave.” Being a stay-at-home mom became her life, Andrew admits, with the arrival of two more children in the next two years.

Their marriage began to strain under the weight of differing expectations and the responsibilities of being young parents. “A lot of it was that this was not how we thought life was going to go, on both sides,” says Andrew.

At the same time, the couple worked together leading worship and writing songs at a local church. But the process wasn’t working. “Kristen and I did not mesh,” Andrew says. “We did not work well together in songwriting at all.”

Andrew had worked in ministry for the first five years out of college, but at the stage of life when he was still trying to figure out his career, he learned that ministry was not where he was supposed to be. It was a difficult transition for him.
In some of their lowest moments, they wanted to quit everything and start a music studio. Kristen, then pregnant with their fourth child in four years, recalls it as a very low period. “That was one of the first times when I was like, ‘I just need to take your hand and not let go,’” she says.

Andrew found a new career path at Veterans United Home Loans, starting back at square one. “I just went back to ground zero and tried to start over,” he says.
“To see him thriving was so amazing,” says Kristen. “That’s when I started to trust him again. But then we took another nosedive.”

Stubborn Love
Kristen thought their marriage could be over. But Andrew had an idea: he wanted them to get up at 5 a.m., before all the kids were awake, and have coffee on the deck. “It was the first time my mind switched to whoa, you’re a different person all of a sudden,” Kristen says. “He was trying. I always knew that was there in Andrew — that’s why I married him.”

The fog was lifting. “That was the first moment I could see my hand in front of my face with the fog,” Kristen adds.

Andrew describes it as the origin of the band’s name. “In my mind, I picture it as the idea of a lantern,” he says. “You can’t quite see a lantern in the fog, but you know something is glowing over there. We got married in January. The time of our life that was the foggiest, when we were like who are you or who am I, when we thought of each other as two distant lanterns in deep fog.”

The idea for the band began in those early mornings drinking coffee and spending quality time together without interruptions. “We were brutally honest,” says Kristen. “All of our defenses were brought down in those moments out on the deck.”
The couple began writing songs during those early morning hours. “We wanted to spend 15 hours a week with nothing else but eyes connected,” Andrew explains. “Songwriting fell into that category. We have a couple of songs that were written in that low place.”

Music became their therapy as they wrote together, continued to emphasize communicating, and began to heal. Slowly, song by song, moment by moment, they began the difficult work of healing their marriage.

Their first song, “Stubborn Love,” was recorded in their children’s playroom. “I loved her when she didn’t love me/He loved me when I didn’t love him,” they sing on the track.

Andrew describes their lyrics as inspired by tiny moments. “Our relationship still inspires me,” he says. “We both didn’t get the things we thought we wanted, but what we got is better for us.”

Their latest single, “All I Think About,” begins with the phrase “I’d rather make pennies and love you well than grow a money tree just to watch it fill.” In harmony, they sing, “When you’re suffering, I’ll be there with you.” Bound by music, they’ve realized that instead of trying to achieve the ideal, true happiness is in being together.

The Joys of Imperfection
The January Lanterns have performed at a mixture of weddings, private events, and local venues like Rose Music Hall, Café Berlin, and Katfish Katy’s. They dreamed about playing Roots N Blues someday — and then they discovered they would be playing the festival this year, on the same day as one of their inspirations and favorites, Mandolin Orange.

“It was a very special moment,” Kristen says of playing at the festival. “It was extremely healing: the blue skies, a gorgeous day. Our kids got to see their parents sing love songs to each other, knowing that they’re a team and they worked through hard times.”

“It’s amazing to think that we’re the artists we dreamed of meeting years ago,” Andrew says. “It’s not the path that we thought it was going to be, but it’s so much better. We have a marriage out of it versus just a music career.”

The playroom where they recorded their first song now sits next to a recording studio that Andrew custom-built with his father. The couple’s next step is to record an album in the space that represents who they are as a duo, as a team, as husband and wife.

The ending to their love song is a happy one. But it’s not one of perfection, and they’re just fine with that. Kristen and Andrew are content with sharing their story, their authentic song. “Our first song that we released as The January Lanterns was so imperfect,” she says. “We did not wait for perfection. I’m proud of that song.”