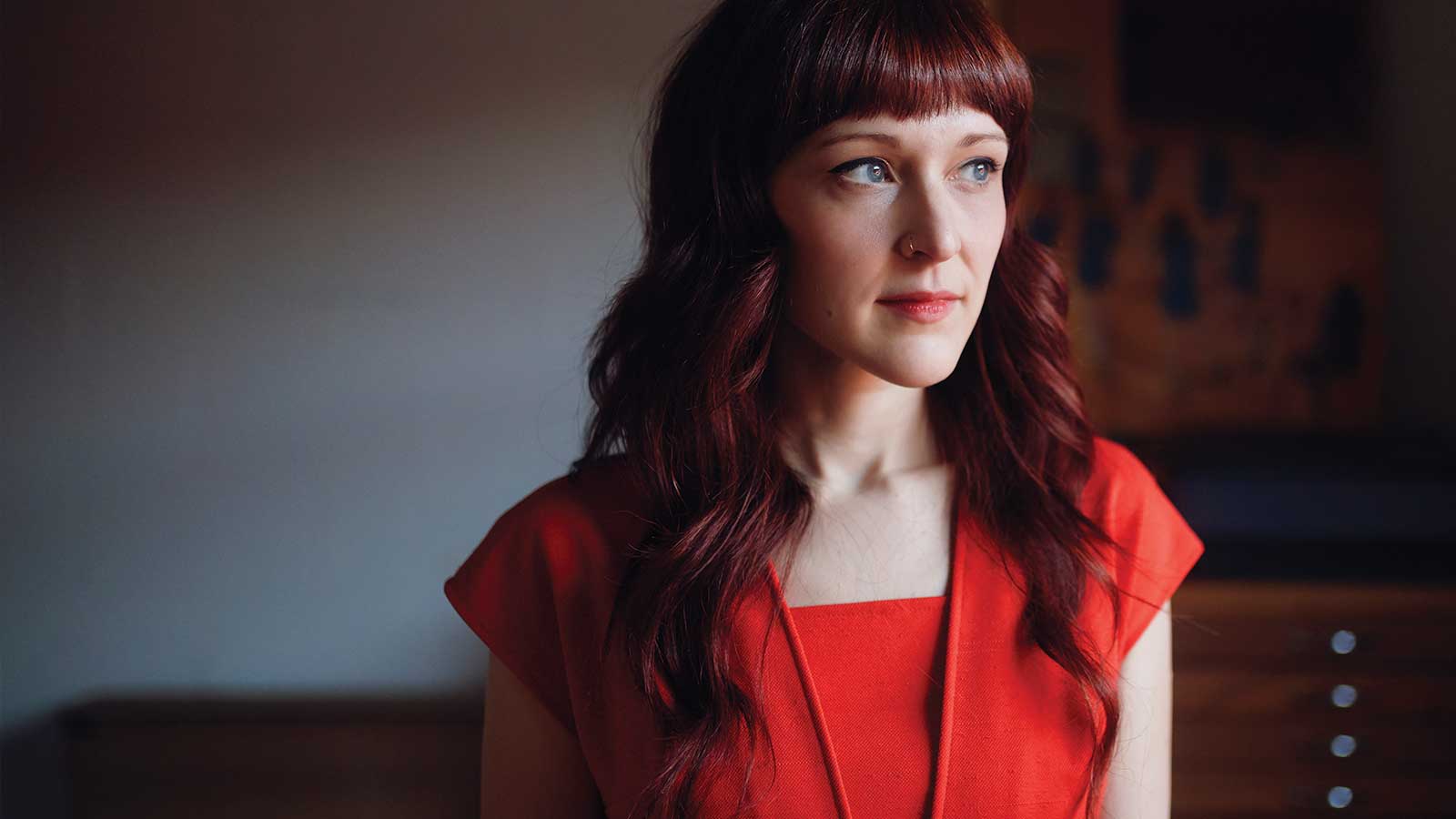 Painter Zoe Hawk explores the eerie world of adolescence in her work.

Zoe is one of those women that you question existing outside of a film. Her attitudinal mixture of eloquence, soft-spoken voice, and quirk evokes a sincere uniqueness seen through her style, her words, and her art.

A Missouri native, Zoe’s work has been written about and exhibited both domestically and internationally. Recently, however, Zoe has come into a dizzying amount of notoriety. She collaborated in a “Women in Art” collection with Zara, a Spanish clothing brand. Once her work hit the streets, it has been seen and Instagrammed from Coney Island to Hong Kong.

“I don’t know how they found me,” says Zoe. She credits Instagram and online art blogs for the discovery.

This past September, Zoe’s work made another unexpected international appearance at Milan fashion week. Fashion designer Marco de Vincenzo used Zoe’s designs for his spring ready-to-wear show invitation. He is currently, according to the Business of Fashion, one of the leading names in Milan fashion.

Zoe chose to be paid by way of the designer’s clothes.

Not Yet a Woman
Zoe’s work has the intangible quality to travel with its viewer.

Her narrative paintings delve into the experience of girlhood adolescence. This time captures the universal anxiety and disorientation that arises during the transition from girlhood to womanhood.

“In the paintings, there’s a combination of the joy, curiosity, and wonder of that transition, but also fear and anxiety that’s all wrapped up in this complicated package of adolescence,” says Zoe.

Broaching themes of social conformity and individual identity, each painting peeks into a scene in the lives of young female characters. The characters are uniformly styled and strategically spaced, performing everyday actions within an intimate space.

“I do give them [the characters] a sense of an internal world. They have thoughts and emotions that pierce through that uniformity of either their group activity or uniformed clothing,” says Zoe. “The paintings are all about how we socialize, how you fit into the group, and maybe how you stand out from the group, and you find your identity within the group.”

There is something eerie or slightly off-putting about the scenes of the uniformed girls. It’s a feeling that’s hard to identify, but will keep a viewer fixated on a gallery wall. It may be how the scenes encapsulate the hot spring that is adolescent metamorphosis.

“The anxiety that I felt with that transition permeates all the paintings,” says Zoe. “When I was a little girl, I thought about what it meant to be a woman. It was exciting and romantic, based on things you would see in cartoons and movies. But at the same time, it was sort of terrifying because it was this obscure, unknown thing, and also inevitable. The inevitability of it was terrifying to me. You can’t stop it.”

An Air of Nostalgia
Entering undergraduate studies at Missouri State University, Zoe knew she wanted to be an art major. Initially, Zoe focused on drawing, eventually finding her way to painting.

“I was a little scared to paint because it’s intimidating,” says Zoe. “But when I took the class, I fell in love with it.”

During graduate school at the University of Iowa, Zoe experimented with a single figure, portrait-style painting based on real people. Around this time, Zoe discovered a photograph that influenced almost a decade of her work.

The photograph was of nurses inside an early 20th century St. Louis hospital. The uniformed nurses were caring for infants while surrounded by incubators. The internalized mystery and gendered activity of childcare intrigued Zoe. Utilizing the hospital setting, Zoe cultivated an imaginative world.

Today, Zoe’s entry point to her creative process may be opened by an engaging landscape in the wild, or she’ll turn to her “flat files,” filing cabinets filled with pages of vintage textbooks, children’s books, and photographs.

“I never copy the image directly, but it’ll give me push in one direction or the other,” says Zoe. “Usually what I am looking for is a pose, action, or clothing that I can take a piece of. The figures are completely imagined.”

Zoe’s source materials are usually from vintage or antique stores. Artichoke Annie’s is her favorite place to rummage through monotonous stacks of papers and books.
For her materials, Zoe works strictly with oil paints. Intense, opaque colors are prevalent throughout her work.

“I love painting with oil paint because of how forgiving it is, and you can fix your mistakes,” says Zoe. “I like the texture of it. I like the slow drying, so you can work and move the paint around.”

As an adjunct professor of beginning painting and beginning drawing at MU, Zoe has found a symbiotic relationship between her studio and her classroom.

Sweet and Spooky
Zoe does not repeat characters, but she does continue to explore similar personas and poses.

Her paintings balance “good” girls with proper posture who follow the rules with at least one character going against decorum. Zoe’s characters may dig in the dirt or be crouching on the ground.

“I always like to have one that’s doing something a ‘lady’ wouldn’t do,” says Zoe.
Zoe keeps her paintings just mysterious enough in their narrative for viewers to formulate their own stories and interruptions. She likes that people find her creations creepy.

“They’ll say, ‘These are, like, adorable, but kind of creepy,’” and that’s good,” says Zoe. “Sometimes they’ll say it to be sort of apologetic, but they’re supposed to be a little spooky and a little uncomfortable. My favorite thing is when I eavesdrop on people, or they don’t know I’m the artist, and I hear what they’re saying.”

These conversations are often the most revealing thing about her work. Zoe says: “Women will come up to me and say, ‘This painting reminds me of when I was in school!’ They’ll me tell me a story about their childhood, and that’s the most gratifying thing to me.’”

Zoe Hawk Lightning Round
Zoe was born in St. Louis in 1982.
Zoe attended Missouri State University.
Zoe’s studio is located inside Orr Street Studios.
Zoe Lived in Qatar for six and a half years.
Zoe has completed residencies in New York, Ireland, Norway, Belgium, and Qatar.
Zoe’s father, William Hawk, is an artist and college art professor.
Zoe is an adjunct painting teacher at MU.

A Home of Love