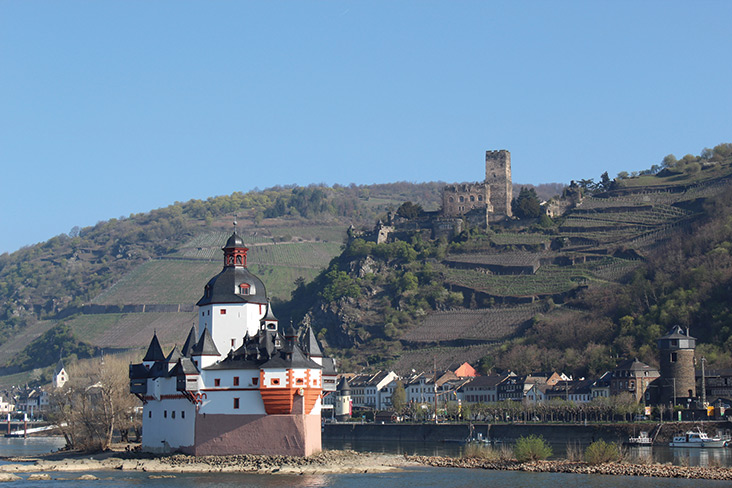 Meet Me by the Riverfront

Pack your bags for a European river cruise and let Viking take care of the rest.

Aside from raising teenagers, my real-life adventures began in 2005 — the day I received my first passport.

Little did I know of the places I would go, the people I would meet, and the cultures I would experience. Each time I rub my thumb across the leathery surface of the little navy-blue book, I am amazed at the worlds this one document has opened for me.

Since 2005, I have visited 15 different countries, with the most recent ones being Switzerland, Germany, and a return trip to France in April. I often make travel plans on my own, for this trip I chose to relax and let Viking Cruises carry the load.

My trip of choice? The Rhine River Getaway with stops in the Black Forest, Strasbourg, Heidelberg, Koblenz, and Cologne, and a pre-excursion extension to the lakeside village of Lucerne. 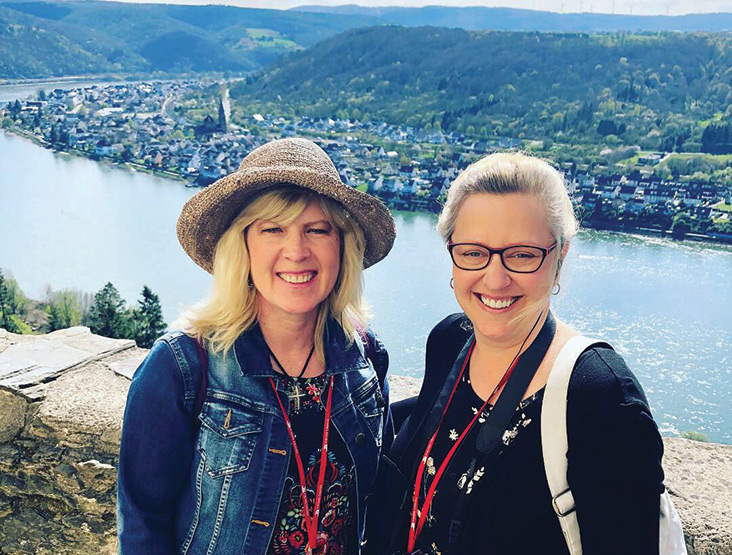 My travel mates? My dear friend Kim Nielsen (pictured above, left) and the new friends we would make from across the United States.

In one word, the journey was exquisite. Viking thought of every detail. The food was authentic and delicious, the towns charming, and the customer service impeccable. So sit back, relax, and join me on a journey from Basel, Switzerland, to Amsterdam on Germany’s longest and most important river. 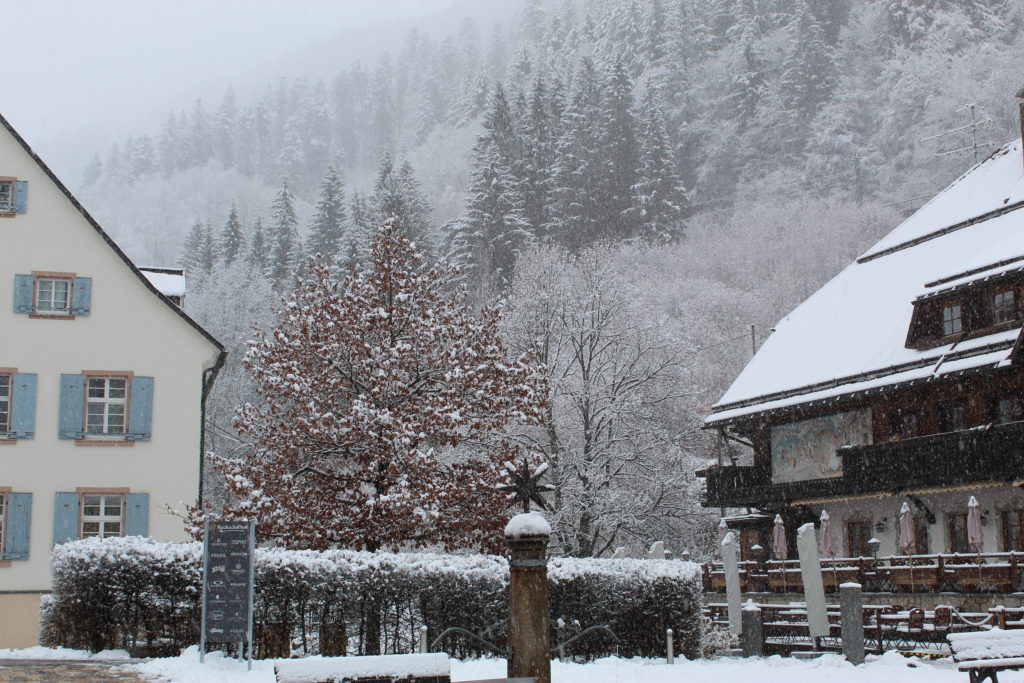 The Magical Black Forest
After a mouthwatering dinner of Swiss stew and a good night’s sleep, we wound our way from Breisach, Germany, through the hilly countryside, past Black Forest farmhouses with straw roofs and absent chimneys. Snowflakes the size of half dollars tossed about like falling cotton and stuck to the windshield of the luxury motor coach. Snow-covered pine trees lined the curvy road creating a magical, mist-filled aura reminiscent of Hansel and Gretel or Snow White.

And it’s no wonder. The region has long been associated with fairy tales thanks to the Brothers Grimm, who created these tales to preserve the nation’s folklore.

As we curled our way back through local villages, brightly colored tulips peered from underneath the covering of snow in the public gardens. White asparagus grew underground, hiding from the rays of the sun. Goats and cows, which normally can be seen sprinkled along the hills, remained safe and warm inside their stables. I was transported back in time as we passed a lumber mill and working water wheel.

Today, as in the time of Roman rule, the forest yields a dark beauty that rekindles my childhood nostalgia and sense of wonder. And the snow, in all its beauty, was an added gift.

After savoring pasta with clam sauce on the ship, we spent the afternoon exploring Breisach, a charming riverside hamlet just a short walk from the dock. The town rises above sloping vineyards in the Upper Middle Rhine Valley, also known as the Rhine Gorge. Steeped in history, it is most notable for nearly being destroyed in the final days of WWII.

While our day was gray and gloomy, Breisach is known as the Toscana of Germany, the warmest and sunniest part of the country. St. Stephen’s Cathedral sits above the town, providing stunning views of the cobblestone streets and traditional pastel-hued houses below. The structure reflects both Romanesque and Gothic styles, and the damage it suffered during the war has since been restored.

Despite the rain, the town begged to be explored. Our sweetest find? Homemade Florentine cookies from a local bakery. For me, it was the Florentine by which all other Florentines will now be compared. 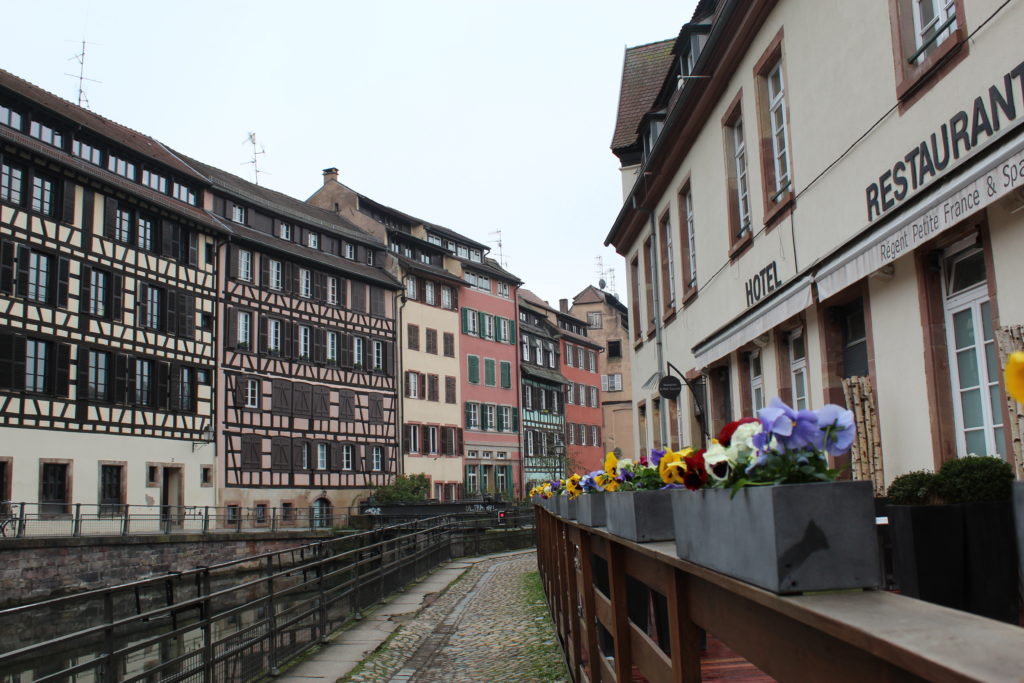 Storks of Strasbourg
After cruising through the night, our journey into Strasbourg, France, began with a sense of astonishment as we traveled by bus through the European District to the north of the city center. As our eyes took in rows of sycamore trees lining a street near the Parc de l’Orangerie, the oldest and largest park in Strasbourg, we couldn’t help but look up.

There, settled in the treetops, were the largest nests I have ever seen, each one holding a lanky white stork. Having never seen one, the wading birds only existed in nursery rhymes and tales of new babies entering the world.

But these storks were real, magnificent creatures. Our guide shared that France started a program to repopulate the white stork in 1983, and the birds had recently returned from Africa, where they migrated for the winter. The magical birds would be the highlight of the day.

Perched on the border of Germany and France, Strasbourg’s culture mirrors the dual influences of both countries with the melding of a traditional past and progressive present.

We explored the town on foot, and our walking tour took us into Old Town, enclosed by the little Ill River, where wooden houses intersected with picturesque canals. We passed patisseries, chocolatiers, brasseries, and antique shops on every corner.

In Cathedral Square, we took in the crowning achievement of Strasbourg: the Cathedrale Notre-Dame, or Strasbourg Cathedral. At 426 feet, it almost touches the sky. It is the highest medieval building in Europe, and houses a renowned astronomical clock, the clock mechanism of which dates back to 1842.

We spent the afternoon in Place Kleber, the city’s largest square. The heart of the city’s commercial district, the square boasts fun water features and the flagship stores of many upscale European brands. The active and energetic environment solidified Strasbourg’s status as a vibrant international city and one I’d like to visit again.

Our adventure in France would not be complete without a melt-in-your-mouth crêpe drizzled in caramel and topped with Chantilly cream. We were happy to oblige. 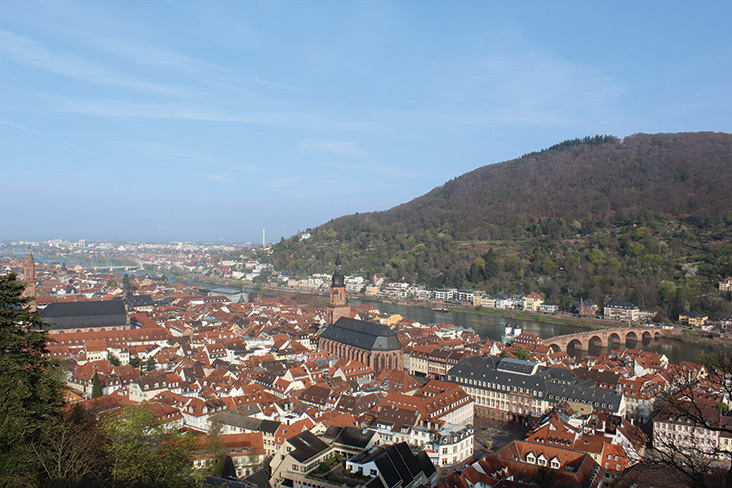 Romantic Heidelberg
“It’s easy to leave your heart in Heidelberg,” our local guide shared, and I couldn’t agree more. The only thing missing from this excursion was a little more time!

With a population of 160,000, including 40,000 students, I felt quite at home in Heidelberg (pictured above). Heidelberg University was founded in 1386 and is the oldest college in Germany. The romantic destination also boasts a baroque-style old town district and the ruins of a fairy tale castle that is perched 330 feet above the river.

The highlight of the day was the journey around the 1607 castle, which was once home to a Palatinate princess before being partially destroyed by fire in the 17th century. As the sky dripped with blue and the sun kissed our faces, we soaked in the beauty and history of these majestic ruins.

The grounds offered spectacular views of the Neckar Valley from the terrace of the castle’s central courtyard, and the wine cellar housed the world’s largest wine barrel — a 250-year-old piece carved from 130 oak trees that once served 50,000 gallons of wine.

Our time ended with a chance to explore the pedestrian-only, 1.6-mile-long main street, with stops in several charming squares along the way. After picking up a few souvenirs, I said goodbye to this enchanting city by sampling an erdbeerplunder, a pastry filled with vanilla pudding. No worries though — after walking 15,000-plus steps each day, the calories simply melted away! 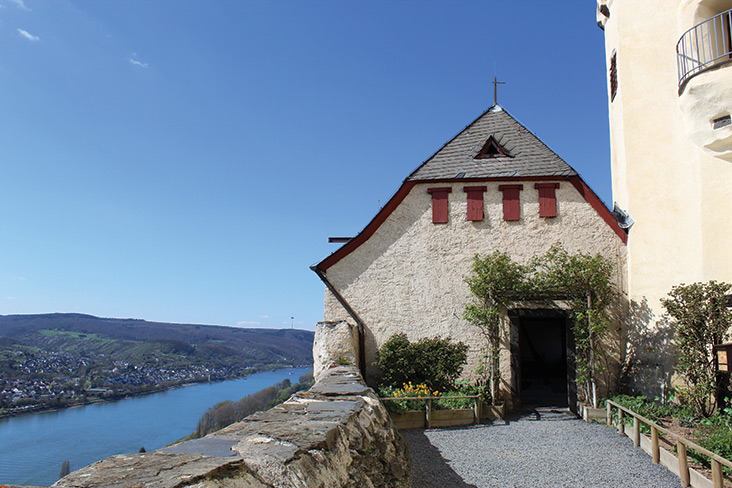 Koblenz & Middle Rhine
On the fourth day, we slept in and spent the rest of the morning bundled up on the sun deck watching the scenery unfold as we cruised the Middle Rhine, the most picturesque stretch of the 820-mile waterway. From Rüdesheim to Koblenz, forests, castles, and vineyards took center stage, complimented by storybook villages nestled along the shoreline.

On the steepest riverbanks, grapes were harvested by hand, and castles of all shapes and sizes stood against the skyline, once protecting the kingdom and now beckoning to be explored. Many stand in ruin, while others serve as luxury hotels. One is even home to an international youth hostel.

Soaked in history, each castle tells its own story. My favorites? The expansive Schönburg Castle and its two neighboring Gothic collegiate churches, in Oberwesel, and the Pfalzgrafenstein Castle (pictured at top), a toll castle on Falkenau Island, which features a unique five-sided, six-story tower. Both are near Kaub.

Following another delicious lunch, it was time to imagine life inside the Marksburg Castle in Koblenz (pictured above). Built in the 15th century, it remains the only German castle undamaged by war or battle.

The journey took us through the citadel, garden, kitchen, wine cellar, bedrooms, blacksmith shop, and more. Despite the opulence of the structure itself, I was reminded of the simplicity of life before electricity and running water. The only heated room was the bedroom, which was insulated with wood to keep the heat from the fireplace inside. The kitchen boasted a wooden ice box, and food was cooked over an open flame.

Following our tour, we spent the beautiful Sunday afternoon meandering the streets of this former trading settlement. The squares boasted outdoor markets and tents full of flowers, pastries, and cheese. Outdoor cafés were packed with families enjoying espresso, wine, or gelato. Shop doors were open and locals and tourists mingled, each carrying bags holding their treasures. The town was vibrant, colorful, and bustling with activity. A man selling balloons stood at one intersection, attracting children of all ages.

It seemed the sunshine and warm weather brought out the adventure in everyone. 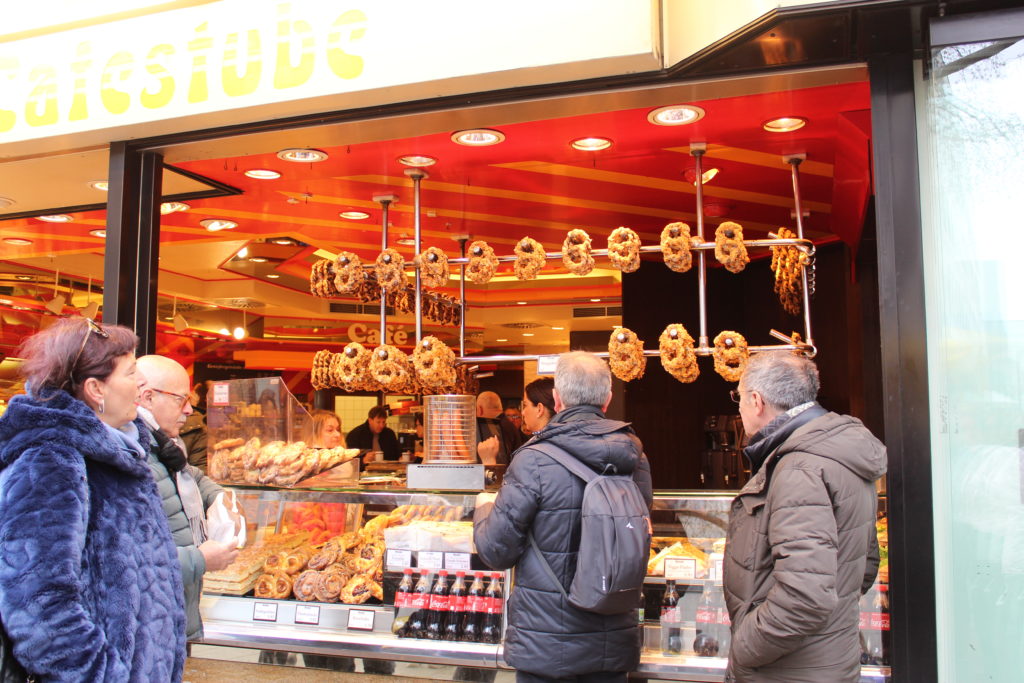 Cologne
Our last stop in Germany was Cologne, a modern city known for its annual carnival — and its beer.

Traditionally the “fifth season,” The Cologne Carnival is declared open in November, but the week-long street festival called “Crazy Days,” takes place in the spring between Fat Thursday and Ash Wednesday.

Cologne is also known for Kölsch, a light, crisp beer that by law can only be produced in Cologne. Guests can sample this creation in more than 100 traditional brewpubs while being served by a köbe (waiter) wearing the traditional costume of the brewery.

Both of these cultural attractions give Cologne the reputation of being a party city. And while the city provided a festive nightlife over the weekend, the remnants were visible first thing on Monday morning — bottle caps and cigarette butts littered the cobblestone streets and trash lined the alleyways. By mid-morning, however, the modern plazas and Hohe Strasse, a pedestrian-only shopping zone, sprang to life with tourists and shoppers.

Despite the crowded, urban feel, our afternoon in Cologne turned out to be one of our favorites. After exploring yet another Gothic cathedral, we ventured out and discovered the shops of our two favorite European brands — L’Occitane en Provence and Swarovski.

With French lotion fragrances and Austrian crystal earrings in hand, our next stop was coffee and pastries at Merzenich, a popular German bakery (pictured above). And after seeing the window stocked with Berliners, a type of jelly doughnut, I just couldn’t pass one up. 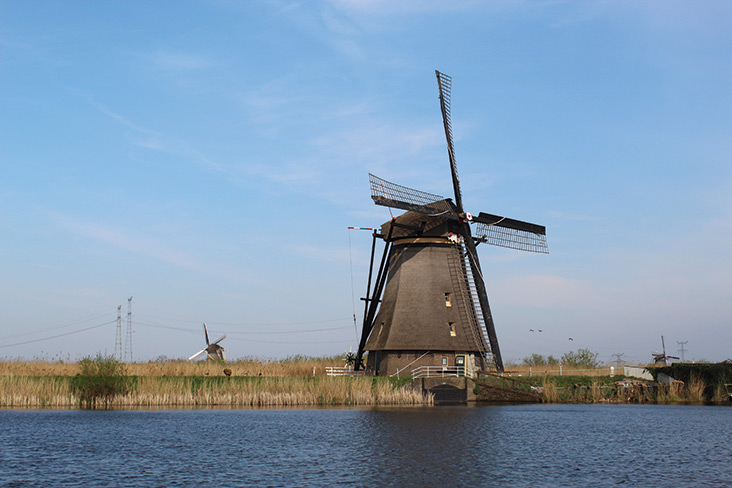 Final Hours
Our evening ended with an intimate dinner on the Aquavit Terrace, served by our new friend, Kris, and probably my favorite meal of the trip. Executive Chef Karl Heinz Zwanzleitner prepared chateaubriand and béarnaise sauce, which I requested be served with his delectable herb mashed potatoes. The tender cut of beef added the finishing touch to an already lovely day.

As morning came, the remaining hours on the ship were quiet. I grabbed a cup of hot tea from the bar and reflected on my experience while watching the clouds slowly roll by. After lunch, I turned the final pages of my novel as fresh air streamed in from our French balcony.

A bit later, we exited the ship in Kinderdijk, Netherlands, for a quick tour of their working windmills. The 19 structures from the 1830s stretched out across the horizon creating an idyllic scene (pictured above). The day was as easy and peaceful as it sounds. And as I drifted off to sleep, I knew I had created memories that would last forever.

Read more about our exciting pre-excursion trip to the charming lakeside town of Lucerne, Switzerland.