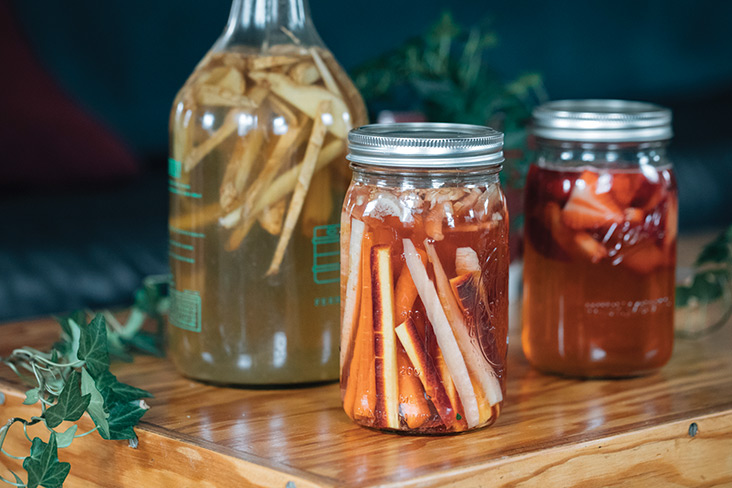 The ancient art of fermentation finds its way into modern kitchens.

I wasn’t a kombucha drinker until half a day into my 26th year, when I met Jared Zillig and his “mothers.” He keeps them on a shelf in his dining room in three glass jugs hugged by malleable sheets of insulation — an experiment he conducted this winter to see if it would keep them in a better mood. (You see, he keeps his house cool, and moms like a cozy, temperate environment). Jared feeds them a fresh batch of sweet tea, their favorite, every few weeks.

Now, you might think that this is no way to treat your mom, but when we’re talking about kombucha mothers, also known as SCOBYs, it’s exactly right. Just consult Sandor Katz, a self-proclaimed fermentation revivalist and author of “Wild Fermentation,” the book that introduced Jared to kombucha.

In his books, Katz explains that the “mother” I keep referring to is also called a SCOBY, which is an acronym for symbiotic culture of bacteria and yeast. It’s called a “mother” because it multiplies, creating layered “babies.” It looks like an alien life-form; it is a slimy, slippery disk, and it’s the wild, weird thing that brings kombucha to life.

By now, you’ve probably heard of this delicately effervescent drink that proponents herald for its supposed health benefits. In its two-millennia history, the popularity of kombucha has waxed and waned in popularity, declining especially during periods when tea and sugar — two vital ingredients — have been rationed.

Like any mercurial celebrity, it’s also had its share of alcohol-related scandals, due to overreaching liquor regulations that have since been remedied. Love for kombucha seems to just keep fermenting. It sits on the shelves of many a market, graces the menus of several local bars, and, more frequently these days, appears in glass jars at home.

Jared, who is the bar manager at Broadway Brewery, is one of the many consumers-turned-producers; he’s been home brewing kombucha for nearly four years. “If you enjoy a product that’s out there, and you think, ‘Oh I can do it myself,’ and you find that you can do it better, it’s really fun to do,” he says. 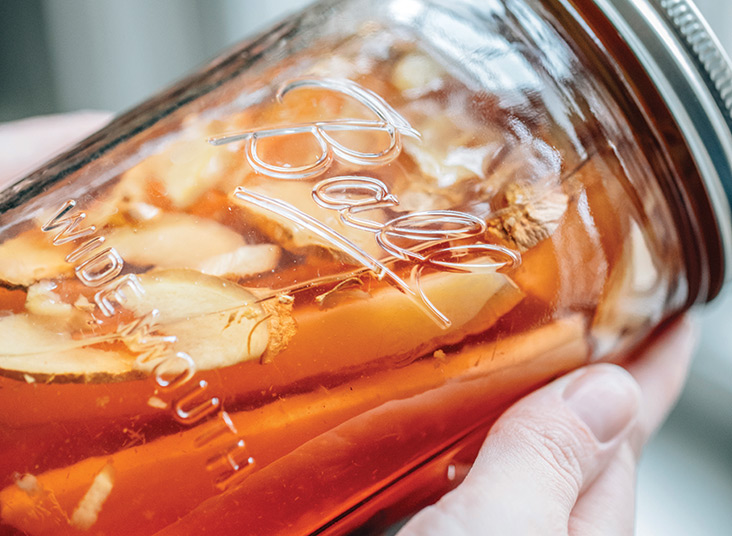 Fermented and Fizzy
Kombucha is a fermented tea, alive with the good kind of bubbles and bacteria. Its essential ingredients are tea (generally green or black,) sugar, and a SCOBY. The tea undergoes two stages of fermentation, starting with a base of sweet tea and the SCOBY. The two are combined and left to ferment at room temperature for one to three weeks. Each batch of kombucha is unique to the brewer — it’s good to taste it along the way to get your own desired balance of tart and sweet.

The second fermentation is where the flavor really blossoms. The tea is placed in a bottle or sealed jar to build carbonation, and in this stage, it can be flavored with juices, fresh fruit, veggies, and more. Jared uses organic ingredients in his home brew, something he says is easier to do in small batches. “If it’s being mass produced, you’ll find that they’re adding lots of juice and not raw ingredients,” he says. “I use organic everything in kombucha, from the tea to the sugar to the fruit.”

Finally, it’s placed in the fridge to slow down fermentation. Since it is fermented, it does contain a trace of alcohol, and when it’s made and sold commercially as a non-alcoholic beverage, it must have an alcohol content of less than 0.5 percent alcohol by volume. The cooler temperatures help halt fermentation and also stop the bottle from exploding under pressure. Now, it’s ready to fill you up will all sorts of probiotic goodness. 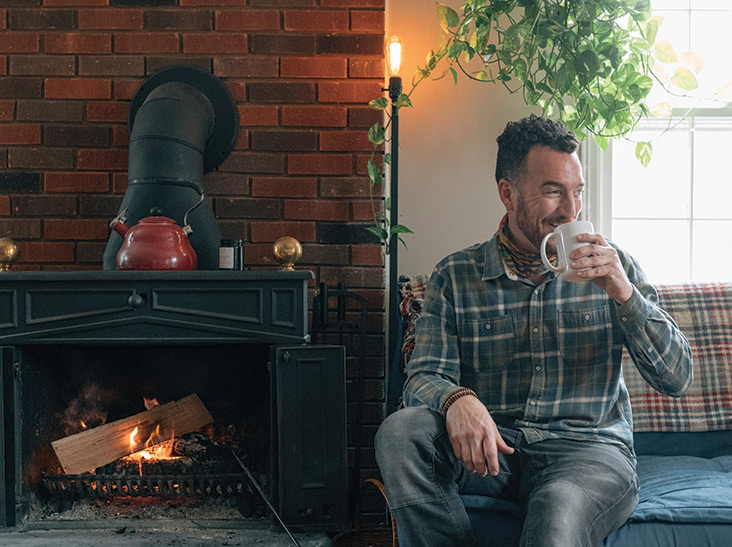 A Cure for What Ails You
Kombucha is alive, and some people claim that it’ll help keep you alive, too. Though most claims have not been clinically proven, it’s a thought that’s been fermenting since the beverage received its name centuries ago. Legend has it, a Korean physician with the surname “Kombu” cured a Japanese emperor with the fermented tea sometime in the third century. Before that, ancient records show a drink, likely kombucha, referred to as an “elixir of life” or “immortality tea.”

Jared testified to its curative powers in the case of a friend who was struggling with elbow pain, for which he’d already had a steroid shot. After draining a bottle of Jared’s turmeric and black pepper kombucha, the friend’s symptoms seemed to dissipate. “It had been hurting me so bad, and I drank all of that kombucha and today my arm feels fantastic and I feel great,” he relayed to Jared.

Jared credits the spike in wellness not just to the fermented tea, but to already-present health enhancers in the later-added ingredients. “There are definitely some probiotics in kombucha, which are very good for your digestive system,” he says. “Depending on an ingredient that you use, like when I use turmeric, the properties can change a kombucha. So say you’re using blueberries; blueberries have their own antioxidants in them and are really good for you, and so I think some of that is imparted in the kombucha, and then the other parts of it from the SCOBY and fermentation are also good.”

Certain combinations of ingredients can elevate the health effects further. “I use turmeric and black pepper together, because black pepper increases the bioavailability of turmeric,” Jared says. “That one is really important for anti-inflammatory — that’s probably the main thing that people take it to supplement. For some reason, just drinking kombucha sometimes will make you feel a little better, and then having a special ingredient will also help.”

Late last year, Jared faced a serious road to recovery following an injury and said kombucha helped in more than just a physical sense. “[Home brewing kombucha] really took off not too long ago,” he said. “I started making more and more when I went through that recovery, because I was kind of stuck here at my house for two plus months — I couldn’t work. But good things came from it, and this was one of them.” 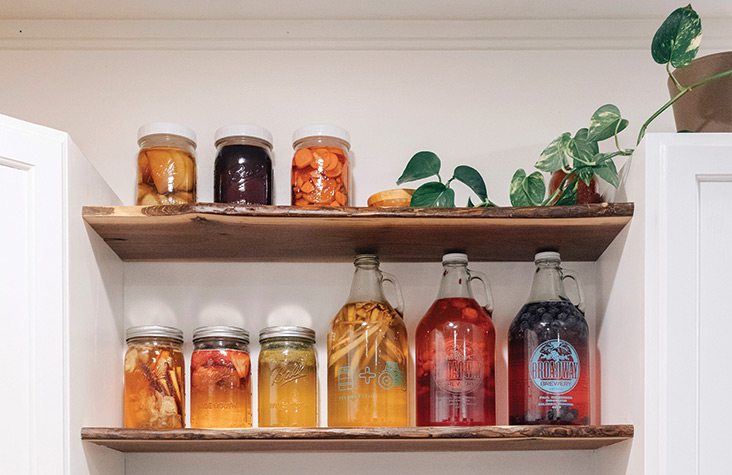 Kombucha at Home
In the late 1990s, kombucha finally took hold of an American audience. Since its arrival onshore, the tart, bubbly, flavorful, and probiotic-filled “booch,” as fans call it, has been the drink at hand for the sick, the health-conscious, and hipsters. Today, it’s mass produced by big brands, most notably GT’s Living Foods, which took in the lion’s share — nearly $400 million dollars — of kombucha sales in 2014. But like many of the modern commercial kombucha brands, the brewing began at home: In 1995, GT’s was a family business that sold to local health stores.

The history of kombucha in Jared’s home began when a friend introduced him to the work of Sandor Katz and shared some of his own home brewing secrets. “He gave me the recipe that he personally uses, and it went from there,” Jared says. “He actually gave me my first SCOBY.”

Jared now harbors three SCOBYs, which means he’s able to almost constantly keep the kombucha tap flowing. Vibrant colors and flavors, hues of gold and crimson, sharp flavors of golden beet, ginger, turmeric, raspberry, and more wade into batches of Jared’s kombucha, which is generally flavored according to the seasons — or what’s hanging out in his pantry.

“It’s nice not to ever waste anything if you don’t have to,” Jared says. “So that’s another thing about making kombucha and shrubs — if I have something that’s about to go bad, instead of throwing it out, I still have a use for it.”

His friends love it, too, maybe because they’re the ones who most often reap the benefits of his labor of love. “I drink it at home, a little bit every day, and I give a ton of bottles away,” he says. “It’s nice to be able to have enough to share.”

When Jared hosts gatherings at home, the booch becomes part of the entertainment. “When I have certain friends over, they love mixing stuff together,” he says. “It’s always like, ‘What was this?’ ‘Oh, it’s the pineapple kombucha and the strawberry kombucha with some raspberry lemonade with some mango juice, topped with a beer.’” And their reaction is usually the same: “Oh, this is amazing!” 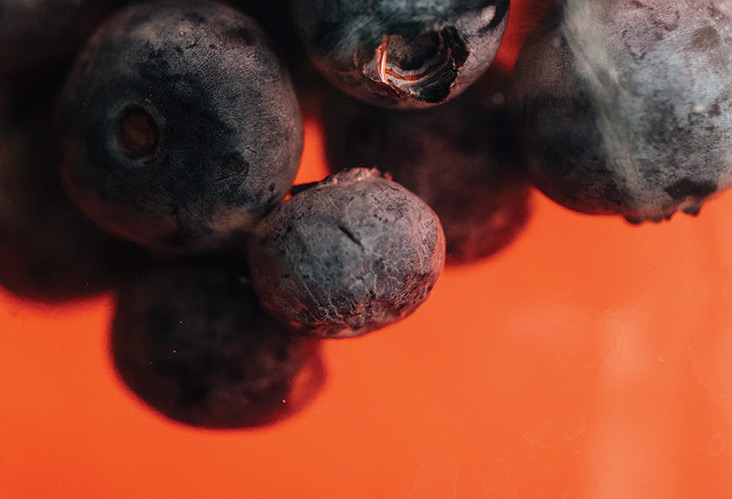 Wild & Alive
Kombucha can bring out your wild side. (I mean, you have to be more than a little brave to get near a SCOBY.) And your creative side, too. How long it’s fermented, how it’s flavored — it’s all up to you. For Jared, the creativity was already there; kombucha was just another outlet.

At work, he shakes and pours handcrafted cocktails with house-made shrubs and is always thinking up another creative twist. “I’ve been bartending for 15 years, so thinking of things like this kind of comes along with thinking about drinks,” he says.

The walls of his home are freckled with his own paintings and photos, and an abundance of greenery flourishes throughout. “I’m a little bit of a creative person, so I always have to be doing something, whether it’s making kombucha, working on the house, or taking pictures.”

In his kitchen, he twists open a collection of Ball mason jars that house his latest batches of kombucha, releasing the built-up CO2 with a small but sharp and bubbly pop. It’s part of his daily creative routine. “I like that I can make it at home; I like that it’s something that I can share with people; I can educate people,” he says. “It’s just an interesting, alive thing that we consume.”

Wild, alive, and at home.

And in case you’re wondering — Jared and his moms converted me. I just brought home my first SCOBY. 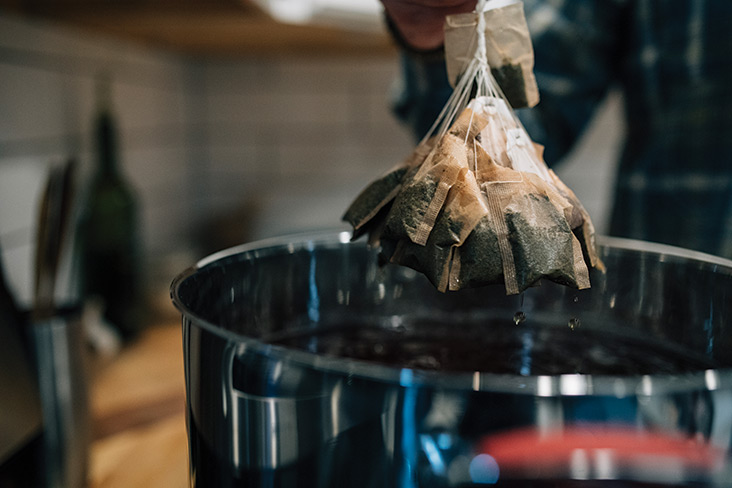 Brewing at Home: What You’ll Need

SCOBY: A symbiotic culture of bacteria and yeast — you can snag one from a friend who already brews kombucha or order one online.

Juice/Veggies/Fruit/Flavor: If using juice, 100 percent juice with no additives is best.