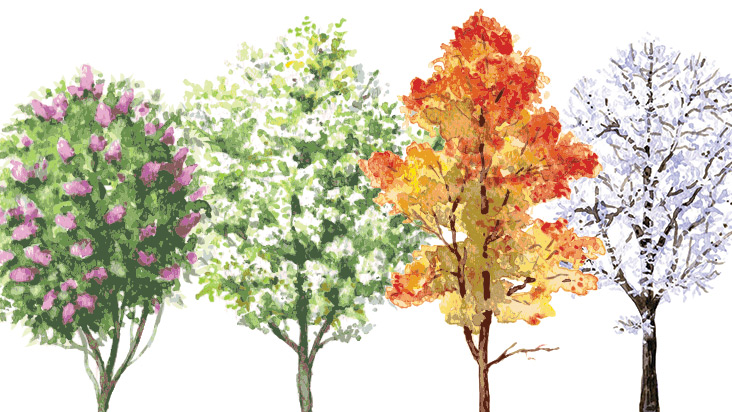 Taking a moment to learn about menopause and andropause.

From our birth until our death, our surroundings shift through various seasons, and our bodies follow suit. Menopause, and her male counterpart, andropause, wait around the corner for each and every middle-aged woman and man.

“Often, when a woman begins to go through the menopausal transition, she will notice many changes in her body and emotions,” says Dr. Laura Grant, owner of the Women’s Wellness Center. “In severe cases, this can be overwhelming.”

Grant explains that it’s not uncommon for a woman to think she is losing her mind because of the relatively rapid onset of mood swings, brain fog, hot flashes, and insomnia. “This is no small matter for a modern woman,” says Grant. “She may be managing a career, as well as a family, which may also include caring for aging parents by this time of life.”

Kim Stewart, a mentor and student ministry leader at Christian Fellowship Church, was 43 years old when she first noticed the symptoms of menopause, which, she admits, felt “a little too early to start.”

“The first changes I began experiencing were increased hot flashes, migraines, and fatigue,” says Stewart. “By age 46, I had stopped having menstrual cycles and began struggling with anxiety and brain fog.”

When her symptoms seemed to worsen, it became difficult for her to find emotional and physical energy for activities that she had previously looked forward to. “I began having anxiety traveling and driving long distances — two things I had always enjoyed,” she says. “For quite some time, I told myself, ‘Just press through.’”

Defining the Transition
“Menopause is diagnosed after a woman experiences 12 months without a menstrual period with no other obvious causes,” says Ryan Woodman, DO, assistant professor of endocrinology and metabolism at MU School of Medicine. According to Dr. Woodman, menopause can occur in the 40s or 50s, but the average age of menopause in the United States is 51.

“During menopause, a woman’s ovaries stop producing eggs, which results in low levels of estrogen production and high levels of follicle-stimulating hormone (FSH), the main hormone that stimulates production of a woman’s eggs,” says Woodman. “The transition into menopause is known as ‘perimenopause’ and is characterized by irregular menstrual cycles and fluctuating estrogen levels, and it can be associated with many symptoms, such as hot flashes.”

Grant notes that while the term “menopause” simply refers to a woman’s final menstrual period, most significantly, it marks the point in time that her ovaries no longer produce the sex hormones estrogen and progesterone. The third sex hormone, testosterone, also becomes markedly diminished by this stage of life. “This ‘hormone plummet’ does not happen all at once but rather over a few years’ time,” she says. Dr. Grant goes on to explain that if a woman has functioning ovaries removed surgically, at any age, she will experience immediate loss of the ovarian sex hormones and is prone to having all of the symptoms and health consequences of natural menopause.

“Menopause is no small matter for a modern woman. She may be managing a career, as well as a family, which may also include caring for aging parents by this time of life.”

Menopausal Symptoms
The symptoms related to menopause (or, more specifically, symptoms related to diminished sex hormones) may range from non-existent to severe and commonly include the following: hot flashes, night sweats, insomnia, brain fog, mood instability (crying or irritability), reduced sex drive, and vaginal dryness causing pain with intimacy. It is also not unusual to have bladder dysfunction — the leaking of urine related to hormonal depletion.

“Aside from the uncomfortable symptoms, there are also long-term health consequences of hormonal loss,” says Grant. “And since a woman is expected to live a few decades after menopause, this is concerning.”

Grant reports that whether or not a woman has any of these symptoms, studies have shown that estrogen depletion, in particular, contributes to risk of heart disease, osteoporosis, dementia, and metabolic changes that can lead to diabetes.

Woodman adds that fluctuations in estrogen can cause weight gain, thinning hair, and dry skin. However, “As a woman’s hormone levels start to stabilize, many symptoms will decrease,” observes Woodman. “And in some cases, completely resolve.”

Andropause and Its Symptoms
Andropause, male menopause, or the more tongue-in-check term “manopause,” refer to the gradual decline of testosterone in men as they age.

“Testosterone levels in men generally peak by age 30 and slowly decline every year thereafter,” says Woodman. “This contrasts with women undergoing menopause, whose estrogen levels plummet over a much shorter period of time.”

Grant notes that “by age 50ish” a man’s testosterone production will be about half the amount he produced at his peak. Woodman emphasizes that it is important to rule out other causes for low testosterone in men before contributing these changes to age. Conditions associated with low testosterone may also include testicular injury or infection, radiation, chemotherapy, medications (e.g., opiates), kidney disease, Type 2 diabetes, HIV/AIDS, or genetic conditions.

“As women, we need the support of one another. Explore all your options for caring for your mind, body, and spirit, and do what is best for you.”

Modalities, Medications, and Treatment Options
Woodman relays that menopause and andropause, generally speaking, require no medical treatments. Instead, treatment is usually focused on relieving the associated symptoms and focusing on preventing or managing chronic conditions.

“The most important thing that can be done to ease the symptoms of menopause and andropause is to maintain a healthy lifestyle,” says Dr. Woodman. “In general, we recommend healthy lifestyle choices, including smoking cessation, diet and weight management, quality sleep, stress management, a yearly mammogram, and exercise. Also, both aerobic exercise for cardiovascular health and weight training exercise to help with bone health.”

For Stewart, it was a combination of various lifestyle changes and hormone therapy that proved to be her saving grace. “Nutrition and exercise have helped tremendously,” she says. “It became apparent that I couldn’t just press through and experience a healthy quality of life for myself and my family,” says Stewart. “I made changes to my diet, began attending strength conditioning classes, and sought the help of a physician to explore my options medically.”

Grant explains that in an effort to avoid hormone treatment, several different prescription medications (such as antidepressants, other psychoactive medications, or drugs to reduce the bone loss that leads to osteoporosis) may be prescribed for various symptoms.

“These types of medications may or may not be effective in alleviating all the symptoms and health concerns related to hormone loss,” says Grant. “And they are often associated with side effects or risks. The body will recognize the sex hormones and will respond accordingly, whereas the other drugs are simply a way to chemically combat the problem, as if treating a disease.” Grant emphasizes that menopause is not a disease, but rather a natural phase of life that can often be characterized by diminished well-being due to deterioration of bodily systems that were previously supported by a full complement of sex hormones.

According to Grant, if a woman has significant symptoms of hormone deficiency, nothing can take the place of hormones to alleviate her discomforts. “Herbal remedies may dampen symptoms for a while in isolated cases,” she says. “However, studies have shown they are not good long-term solutions for most symptomatic women.”

According to Woodman, some of the complementary and alternative medicines known to help manage the symptoms of menopause include plant estrogens, black cohosh and other botanical supplements, yoga, acupuncture, relaxation therapies, and hypnotherapy. He says that these treatments “do not have strong scientific evidence to support their use, but they are currently being studied.”

Grant explains that many of the tissues in a woman’s body contain receptors for hormones, including the particularly studied and notable hormone estrogen. When hormone receptors are empty because of diminished hormone levels and a woman is having symptoms, Grant believes the most effective solution is to replenish her body with hormones, which she believes is the most natural solution of all.

“Ideally, hormone therapy should be identical to the hormone molecules made by the human body, and these are available in a number of different formulations,” says Grant. “Estrogen, progesterone, and testosterone can be administered easily to control symptoms and reduce risk of adverse health consequences related to hormone deficiency.”

However, not every woman will need any of these three sex hormones, and Grant advises that the hormone treatment should be individualized with attention to each woman’s symptoms and health history. “For men with symptoms of hypoandrogenism (andropause), testosterone replenishment is the answer,” says Grant. “This can be administered as a gel, intramuscular injection, skin patch, or as pellets implanted beneath the skin.”

Dr. Woodman agrees that once the diagnosis of low-testosterone is confirmed with symptoms, then the mainstay of treatment is testosterone replacement therapy. He notes the aforementioned methods listed by Dr. Grant, adding that “The best option is based on patient preference, tolerance, and cost.”

Resources and Reaching Out
“There are many resources to help with education and counseling on these life changes,” says Woodman. “Most importantly, share your experience with others to help them understand what you’re going through.”

Stewart advises that reaching out to others is key and that women should not be ashamed of this season in their lives. “I’ve had so many conversations with women who are on the other side of menopause and who have shared that they silently walked through menopause alone,” she says. “As women, we need the support of one another. Explore all your options for caring for your mind, body, and spirit, and do what is best for you.”

However, as Grant warns, there are many sources of misinformation in the media, on the web, and in the average person’s social and familial circles. Not every primary care physician may be well-informed or interested in discussing the complexities of hormone therapy.

“If a person believes they are beginning to have symptoms of menopause or andropause, they should seek out a physician who is knowledgeable about hormone replenishment,” says Grant. “Those practitioners who are up-to-date and interested in hormone health are able and willing to spend the time it takes to explain what is happening within the person’s body and to provide full education about safe choices for hormonal replenishment.”

Regarding women in particular, Dr. Grant says that “often, the last person a woman looks out for is herself.” She encourages midlife women (and men) to pay close attention to their bodies’ signaling and to seek professional help as soon as symptoms arise.

If you are wishing to support someone going through menopause or andropause, Stewart recommends reading up on the effects of the condition to start gaining a better understanding.
“Often the woman or man experiencing this feels very out of control with her or his own body,” she says. “A loved one who is well-informed can be more empathetic and supportive. Show compassion and don’t judge. Be a safe place of support for your loved one in whatever path they have chosen.”