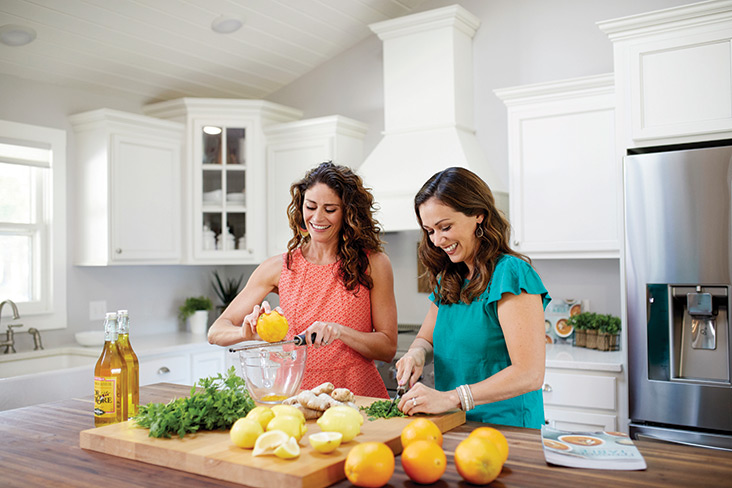 It’s a typical summer morning and Rachel Tiemeyer and Polly Conner find themselves in a familiar place — the kitchen. With the sun streaming through the windows, the pair laughs softly, telling stories about their week while preparing the citrus coating for their zesty marinated shrimp. Rachel does the zesting while Polly chops the parsley.

In this day, when many families are searching for ways to simplify their lives, these two moms, friends, and bloggers have paired together to help.

Rachel and Polly got started with their own blogs, Rachel writing about food and health while Polly focused on crafts and DIY projects. In 2012, they decided to start a blog together. Putting in $45 each and committing to work 15 hours per week, they carefully entered the world of business. They named their blog “Thriving Home” and focused on transparently discussing the challenges and triumphs of motherhood alongside simple and tasty recipes. 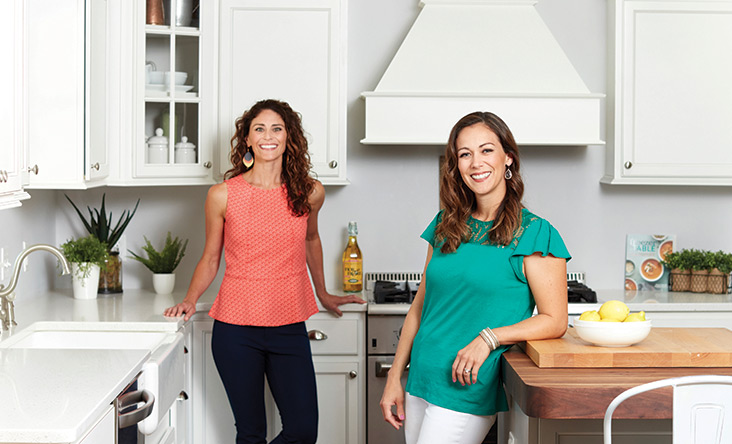 In 2007, Rachel joined a freezer club where she and a group of six friends would plan and cook freezer-friendly meals in bulk to be shared among the group.

“We would get together about once a month, bringing recipes that we thought might be freezer-friendly,” Rachel says. “At the time, we didn’t know. There was no Pinterest, no one was writing about freezer cooking, there were no resources for it, and it was a lot of trial and error.”

Rachel took notice of the meals that were a hit with her husband and three children, along with the other freezer club members, and shared them on their blog. In what seemed like no time, Google began picking up their blog as a top site for healthy freezer meals.

“As an entrepreneur, when something starts taking off, you go with it,” says Polly, “so we started writing more about freezer cooking and how to start a freezer club.”

While Polly had been freezer cooking for several years, the wife and mother of three just joined her own freezer club just last year. “The dinner-time struggle is very real in our home. I realized early on that having meals prepped in advance that I can throw in the oven or on the stove is a game changer,” she says. 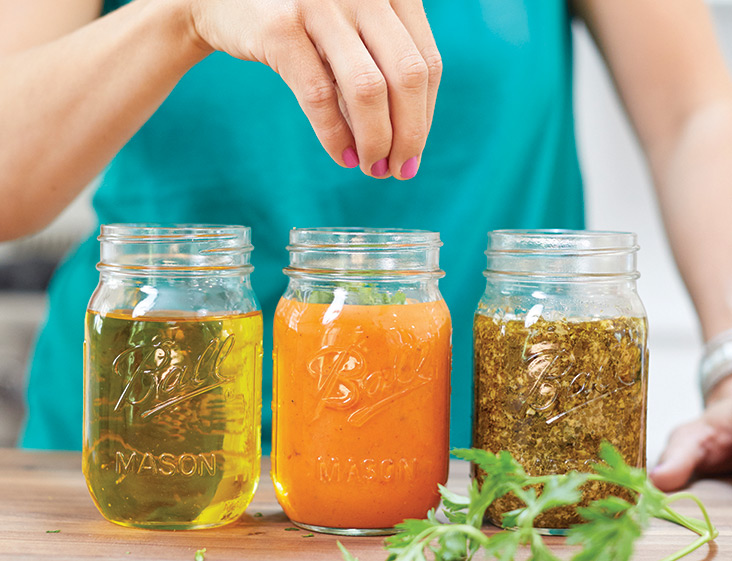 Eighteen months into their blog, Rachel and Polly were able to pay themselves. About three years in, they were approached by a few publishers about writing a cookbook. Once the seed was planted, they began to research the options of independent publishing versus traditional publishing. Catching wind of the amount of work it would take to self-publish, they reached out to a literary agent who helped guide them through the traditional publishing process and navigate incoming offers.

“Our agent has made our cookbook dreams come true,” says Rachel. “She cast the vision for why this book would work and was an advocate for us in the industry.”

Nine months of hard work and dedication later, Polly and Rachel finished writing their book proposal. Rachel took on the role of editor and “recipe queen” while Polly leaned more towards the project manager role.

Once their proposal was finished, they had a clear outline of their book, including the text and recipes for several chapters. Rachel and Polly received three offers from national publishing companies.

“We called it bid day. We were in an ideal situation where they were bidding on us, we weren’t trying to convince them, which was really fun,” Polly says.

They accepted an offer from Rodale Publishers, which at the time was the country’s largest independent book publisher. Recently, Rodale was bought out by Penguin Random House, the biggest publishing group in the country, which happened to be a huge stroke of luck for Rachel and Polly. Together they published “From Freezer to Table,” a cookbook featuring more than 75 easy whole-food recipes that are, of course, freezer-friendly. 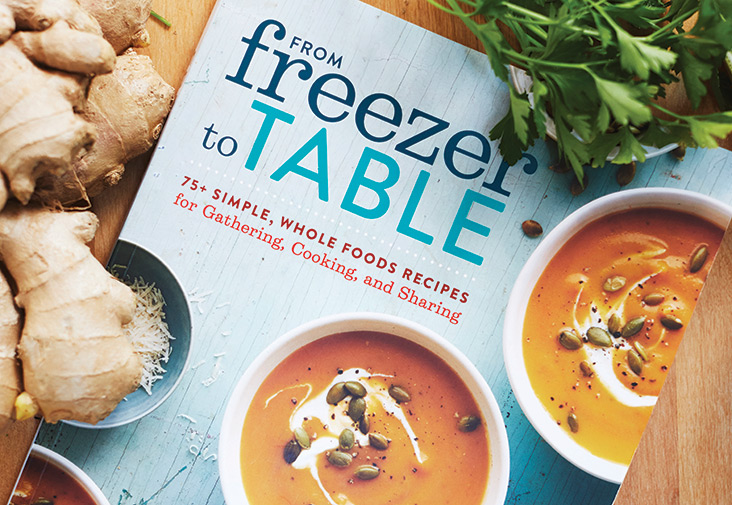 No detail was forgotten during the writing process. Rachel and Polly cooked every meal from fresh and frozen and tested it on their family, considering them the most honest taste testers.

In addition to personally testing each recipe, they also rallied 400 people whom they call their “recipe testing team” to help catch any detail unmentioned or to note any direction that may be unclear. This team also helped them launch the book.

When asked how they thought their book was received, Rachel and Polly are modest regarding their success, saying that the goal was always to bring families together and to change the stigma related to freezer cooking.

“It’s really done what we hoped it would do, and that was help families come together around the table,” says Rachel. “It’s not about having a stocked freezer, but bringing families together. We know there’s so much value in that time together.”

Calling themselves “humble home cooks,” Rachel and Polly identify with the everyday mom and know the struggles that go along with that role, which is why they created a cookbook that is clear, simple, and achievable.

“These recipes are made for people like us. We need simple, recognizable ingredients, instructions you can understand, and ingredients you can find in your pantry,” says Polly. “There are a lot of great cookbooks out there, but this is a very practical one for the mom who is just trying to make it.” 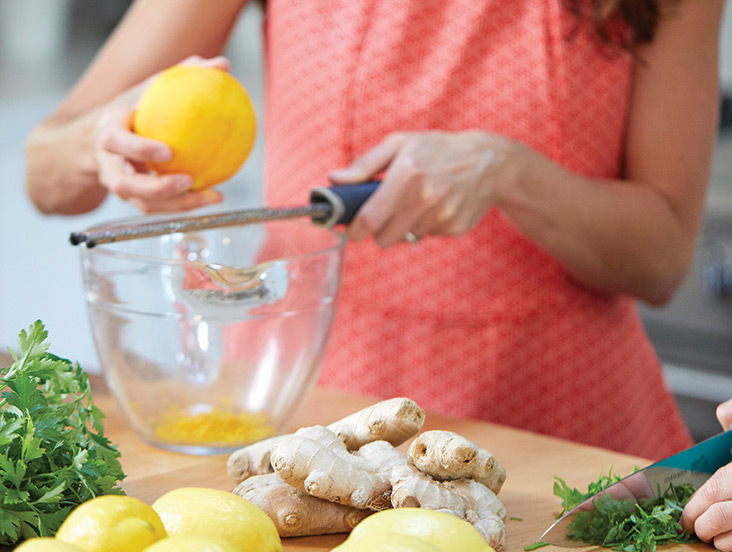 Rachel and Polly are currently deep in the writing and testing stage of their second book, “From Freezer to Cooker,” which will house whole-food recipes for slow cookers and Instapots. With Instapots being the new cooking rage, Rachel and Polly are excited to be on the forefront of this movement.

“There aren’t a lot of resources trusted for Instapots yet,” says Rachel. “There’s not an industry standard — we’ve had to do a lot of trial and error to get these recipes just right.”

The pair is testing each recipe from fresh and frozen for both the slow cooker and the Instapot, making it double the work. “If we hit a home run, and that’s our goal, it will be super helpful,” Rachel says. Polly agrees, saying, “It’s going to be a killer resource.”

The team hopes to have their second book published by 2020. In the meantime, they’re quite comfortable in the kitchen, their evenings filled with zesting, chopping, mixing, and freezing.

How much do you know about freezer cooking? Take our quiz.