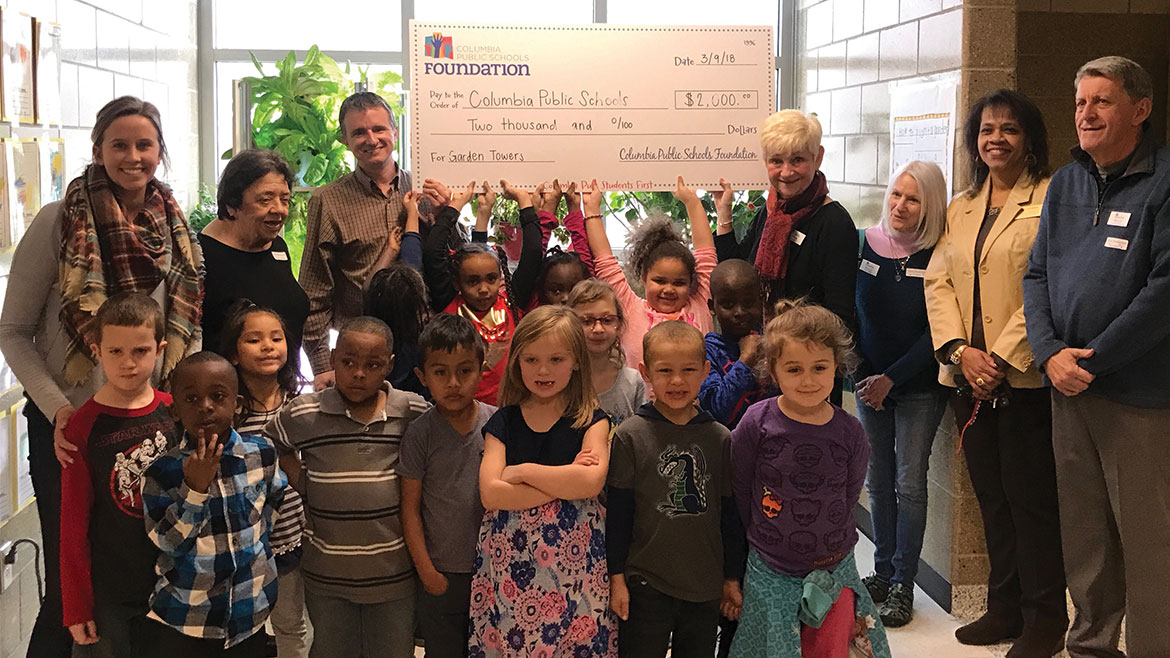 Hap Hairston recalls that when the Columbia Public Schools Foundation was founded, he was the principal at Rock Bridge Elementary. Back then, one of the school’s teachers, Laura Jackson, was one of the first educators to receive a grant from CPSF, which she used to work with NASA to bring cutting edge learning experiences to students.

“In the early years, the CPSF grants focused on specific learning activities brought forth by an individual teacher or a collaborative grant from a team of teachers,” says Hairston, now a CPSF board member. “The grants enabled teachers to have the extra materials and supplies to provide enhanced learning experiences for their students.”

More than 20 years later, the foundation has built a more than $1 million endowment and provides funding for activities both in and outside the classroom — and both in and outside the community. And the grants have not only grown in size, they also provide more resources to more kids at the department and even district-wide level. The foundation has funded projects in every CPS school and the Career Center, allocating more than $1 million to enhance education.

Board of Directors Vice President Cindy Mustard says, “The main purpose of the foundation is to provide extra support for programs that don’t go under traditionally funded CPS projects,” but still fit with the curriculum for the district.
Mustard says when the committee assesses grant applications, the core question is what is missing that the students really need? The organization has no employees and is comprised entirely of volunteers.

Applications for funding include a needs assessment, a plan of action, and an explanation of coordination with existing district initiatives. It also requires the applicant to answer critical questions, like “How will you monitor and evaluate the project to determine if the goal and objectives are being met?” and “How will you determine the strengths and weaknesses of this project?”

There’s a Grant for That

Thanks to CPSF, the Columbia Public Schools’ drumline is attending a summer festival in Japan. (They’re the only team of high school students from the United States that was invited.) A grant from the foundation will cover the students’ passport expenses and etiquette classes in preparation for the trip.

A two-week trip to Shanghai and Beijing for 18 high school students was made possible in part by the foundation, too, as part of CPS’s China program. The students were able to attend language classes, speaking engagements and performances.
A CPSF grant recently provided funding for the Family Welcome Center at the CPS Aslin Administration building, designed to create a welcoming space for the English Language Learning students and families seeking support services. Also, thanks in part to CPSF, each elementary school in Columbia has garden towers, allowing students to grow vegetables, which they can use to make salads, among other science-related activities.

And we can’t forget the emphasis on STEAM programs: science, technology, engineering, art, and mathematics. CPSF provided support for the creation of makerspaces in school media centers where kids can experiment, solve problems, and even build robots. The CPSF also supports the district’s STEAM Bus, which is an additional mobile makerspace (converted from a school bus). The STEAM Bus was made possible entirely through local donations, including the bus itself, which was gifted from Student Transportation of America.

It Takes a Village

The Columbia community rallies behind CPSF’s cause. Local PTAs, businesses, and family foundations contribute to provide added value to the education of Columbia’s students. Caledon Virtual designed the foundation’s website. VU provided funds for the Maker Spaces grant. The Miller Family Foundation, among other local contributors, has been a major contributor for years.

Columbia’s robust festival culture is also being utilized to bring opportunities to kids in partnership with the foundation. CPSF has provided a three-year grant for students through The Ragtag Film Society Literacy Initiative, which includes year-round field trips to Ragtag Cinema for film screenings, a filmmaker Q&A at the True/False Film Festival, and media literacy instruction strategies for teachers. As part of the Unbound Book Festival, the foundation provided a grant for the Authors in Schools program, which supplied books to students to read prior to having the corresponding authors brought to the schools. Shepard, New Haven, Ridgeway, Fairview, and Blue Ridge Elementary Schools were participants, along with Gentry and West Middle Schools and all four CPS high schools.

Through their Hall of Leaders event, CPSF has recognized outstanding educators, volunteers, and alumni of Columbia Public Schools since 1999. Mustard emphasizes that the foundation’s impact is truly a testament to members of the community who rally together for the mission of improving the education of CPS students.

“None of it can happen without sponsorships from businesses and individuals,” she says. “The foundation is here to make a difference in every student’s life, and that’s where we’re really hitting the mark — to innovate the learning process.”