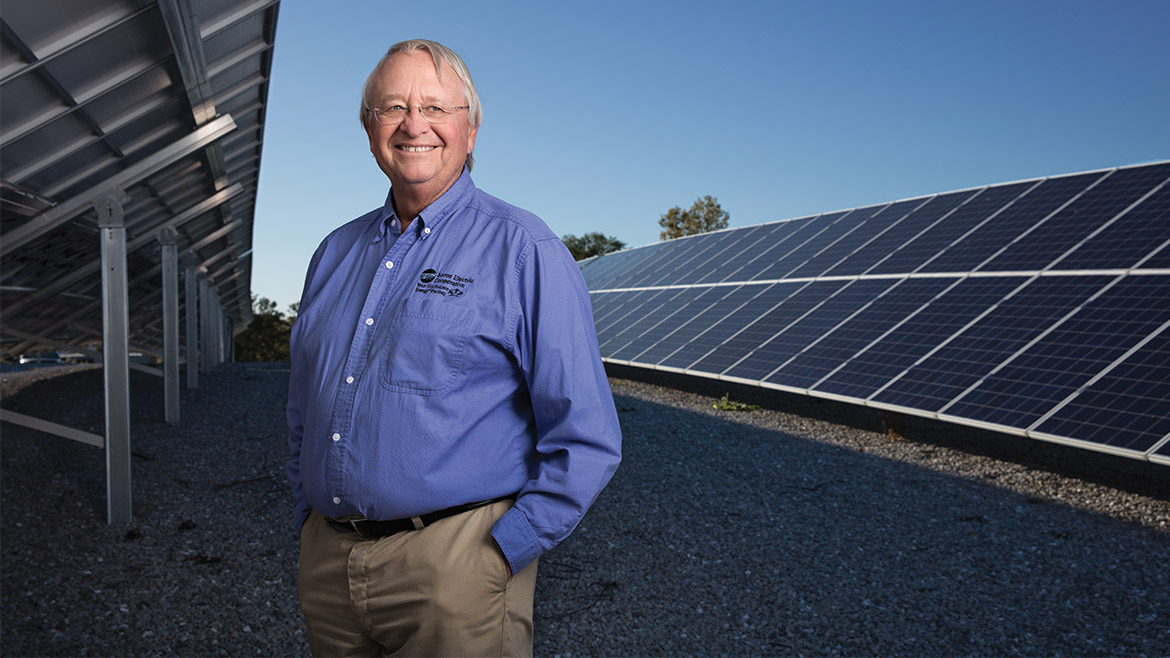 Since its founding in 1936, Boone Electric Cooperative has always had the mission to provide Missourians with access to power — but now, with more ways in which to supply power than ever before, access isn’t enough. The cooperative wants to further reach members’ needs by providing them with the options they want for where their energy comes from.

Boone Electric convened their 80th annual meeting this past July, and they celebrated  the one year anniversary for the co-op’s Community Solar program this past September. It’s an apt time to give recognition to a company that has been pivotal in not only the history of Columbia, but in the city’s future.

Getting on the Map

Growing up in Columbia, Boone Electric has always been a part of my life, even if I didn’t always recognize how heavy its involvement was. It wasn’t until I met with Chris Rohlfing, Boone Electric’s membership services director, that I gained an appreciation for the scope of the cooperative’s work.

Rohlfing has been with Boone Electric Cooperative for more than 30 years. The beginning of our discussion began with the history of Boone Electric. “After starting off downtown, the cooperative bought a 23-acre farm, and all these years later, the building we’re sitting in is on the same land where it all started,”  Rohlfing says.

The co-op’s origin started with the need for rural Missourians to have access to electricity. As the world built up around them, the citizens of Mid-Missouri, mainly farmers at the time, found themselves being overlooked by private power companies as power lines went up across the nation. But thanks to the Rural Electrification Act, a law passed under President Franklin Roosevelt’s New Deal, it was possible for citizens to get loans from the federal government to install electrical systems in farming communities.

The effort to bring power to Missouri began with one letter, written by May and Wilbur Watson, that was sent to D.C. petitioning for getting REA lines up in the state. Farmers then had to band together and pass on the funds to be a member of the cooperative. It originally cost $5 to be a member — about $90 in today’s money — and there had to be at least three co-op members per mile before progress could move forward. Thanks to the effort of those determined first customers, the lines went up and became a foundation for further progress in electrifying Mid-Missouri. Boone Electric’s website says that “by the end of 1937, Boone Electric served just more than 140 members in rural Boone County.” The co-op has come a long way. Now there are  approximately 25,000 members spanning six counties.

The future of Boone Electric largely depends on its members’ demands — the co-op’s main directive is to stay attentive to the needs and requests of those they serve. In recent years, the biggest shift has been in how customers want energy to be created. Boone Electric now offers its members multiple ways to receive energy, the newest being solar and wind. The former comes from the new Community Solar Program, which features a lot filled with solar panels near Boone Electric’s headquarters on Rangeline Street, while the wind energy is provided by one of Northeast Missouri’s first utility-scale wind farms.

While solely using these energy sources is nice in thought, Rohlfing points out that relying only on solar and wind is not the most efficient, nor the most economical. Boone Electric draws upon multiple sources of energy, including coal and natural gas, to offset some of that cost.  Each member can still choose the places their energy comes from and receive it at an affordable price.

They’re also reaching out to their members in other ways, including a scholarship program for graduating high school seniors living in Boone Electric service areas. The co-op has awarded 13 $2,000 scholarships per year since 1998.

While the co-op’s main focus stays on their members’ demands, they also want to foster interest and educate customers on where their power comes from. The first anniversary celebration for the Community Solar Program was a festive celebration, to be sure, but Boone Electric also used the event to provide information on how the solar panels work and provided an outlet for interested members to ask questions about the program.

“I really hope that people will leave with an understanding of how their energy works,” Rohlfing says. “I think that there’s a moral push behind solar power, but a lot of people don’t realize how much it would take [in solar panels] to meet the needs of members. But ultimately, it will always be the members’ choice for where their power comes from.”

Boone Electric is incorporated on June 11. It’s the first rural electric cooperative in the state and will serve more than 140 members by 1938.

Expansions and system improvements throughout the state allow Boone Electric to continue growing its member base.

Boone Electric joins other cooperatives in the state to form Associated Electrical Cooperatives Inc., a group to plan and operate the generation and transmission facilities for the state’s rural co-ops.

Boone Electric and the City of Columbia sign a territory agreement stipulating how much of the Columbia area would be served by the co-op.

The cooperative forms the Boone Electric Community Trust, which has given back $2.5 million to the community since