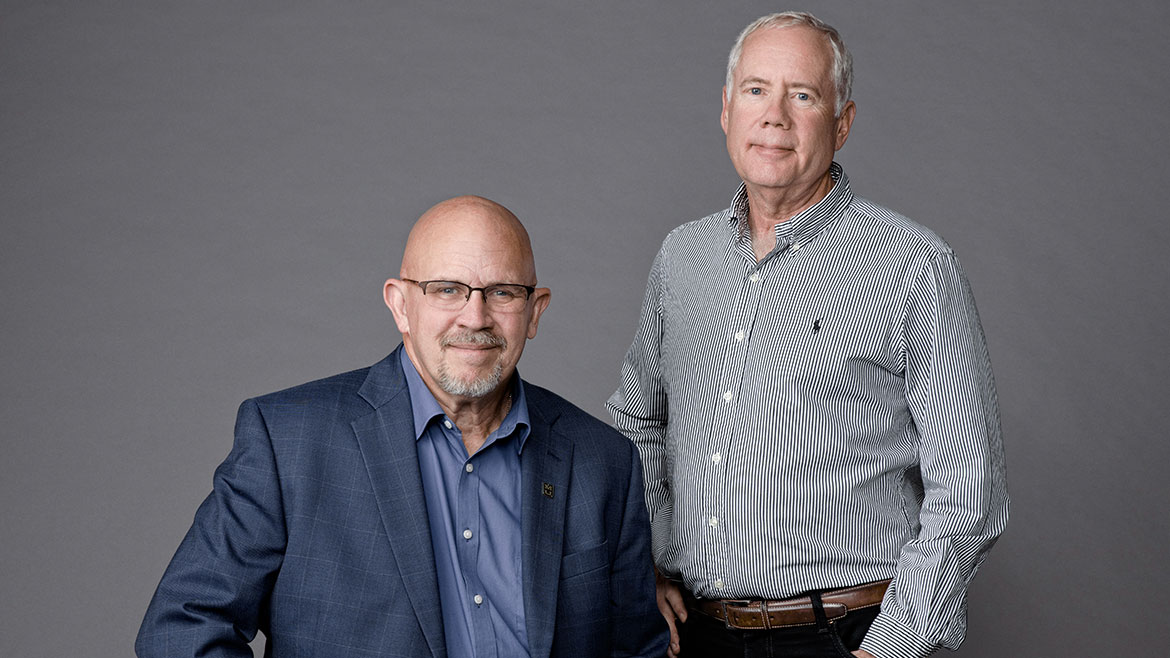 Level Up: Inside Columbia College eSports

Sarah Hill had an epiphany right in the middle of a mentor meeting.

The former news anchor and chief storyteller at Veterans United came to a meeting of the Mizzou Venture Mentoring Service because she thought her skill set could be of use to the prospective entrepreneurs who tap the service for assistance in launching their startups.

With a fledgling enterprise of her own — StoryUP, a virtual-reality media company — Hill came to the conclusion that she could also probably stand to benefit as a mentee.

“They talked about all the things that they could provide, and I quickly realized that, well, I need help with that,” Hill says. “I don’t have all the answers, even as a mentor. VMS offers a non-threatening, welcoming, inviting way to surround yourself with geniuses of business and tap into some of those skills that you need.”

Since its launch last October, the Mizzou VMS has been busy welcoming entrepreneurs into its fold and matching them up with a team of mentors that it feels can best suit their many (and varied) needs. At the end of its first year, co-director Greg Tucker says, the service boasts around 30 mentors for 20 entrepreneurs. Plus a full waiting list.

“We want to connect these people so that we’re increasing the odds for the entrepreneurs to be successful going forward,” says Tucker, who is also associate director of the Missouri Small Business and Technology Development Centers. “We look at ourselves as a startup and, like any startup, we have to control the growth. We’re very selective of our entrepreneurs, very selective of our mentors. We’re trying to build a pretty high-level, high-end program.”

The Mizzou VMS brings two or three new projects — screened by its operations board — into its monthly meetings at the Missouri Innovation Center, where the entrepreneurs present a 10-minute pitch to the group of mentors. After, the mentees leave the room and the mentors hold a roll call for who they think can best nurture the project. Usually, around three or four mentors get paired with each venture.

The entrepreneurs set up a 90-minute session with their mentors, and, once all the action items from the previous meeting have been completed, they can set up subsequent meetings for as long as they’re needed.

It’s a free service, even though prospective clients must have some tie to MU, and Tucker says that’s open to negotiation as well. Come to VMS with a worthy idea and you’ve got a good shot at getting in front of the group.

The mentees get a chance to troubleshoot the early days of starting a business with people who have been through it before. The mentors get to give back to a community that has helped nurture their paths to success. All this for the purpose of keeping the entrepreneurial ecosystem in mid-Missouri a welcoming one.

“There is an infrastructure in place in Columbia to help entrepreneurs start and grow their business,” says Greg Bier, a VMS mentor as well as the director of MU’s Entrepreneurship Alliance and the Entrepreneurship Bootcamp for Veterans with Disabilities. “All the players here in Columbia are fairly well known. And they’re very involved, very liberal with reaching out and supporting one another.”

Before Bill Turpin landed the role of director for the Missouri Innovation Center in the summer of 2014, he had to pitch to the board.

His idea was a vision of Columbia as a second coming of Renaissance-era Florence. In the 15th century, the Italian painting masters had gathered there, which then drew patrons and apprentices to Florence, which then helped establish the republic as a center of fine art.

Columbia was full of bright minds with innovative ideas. Why not localize an apprenticeship model at the university and try to turn the city into a Florence for entrepreneurs?

“I think it’s the No. 1 thing we can do for companies — to surround them with people who have their best interests in mind and are coaching and counseling them to be successful,” says Turpin. “Columbia didn’t have a lot of those people just floating around.”

Turpin got the job and, along the way, earned a big fan in then-senior vice chancellor for research and graduate studies, now interim chancellor of MU, Hank Foley.

When Foley was vice president for research at Penn State, that school effectively used a mentorship model that was pioneered by the Massachusetts Institute of Technology. Foley told Turpin that if someone wanted to bring a similar model to the Columbia community, the university would gladly pay to get it on its feet.

The group of five learned from the directors of the program at MIT and sublicensed it for use at MU. When they got back to Columbia, they put together an initial list of mentors for a launch in the fall. Turpin says it wasn’t too difficult of a task. Local businesspeople were eager to help.

Once October hit, the Mizzou VMS was open for business.

“A lot of this was due to Hank Foley’s vision and having him to move it ahead,” Turpin says. “I think, without his vision, we would’ve probably created some homegrown system, maybe wouldn’t have been as good. We wouldn’t have gotten as good a staff to run it. That was kind of the kick-off.”

Tucker, Turpin, Wyatt, Gann, and executive assistant Marsha Moore serve as the VMS operations team. O’Brien was an integral part of getting the venture off the ground and served in that group until recently. She moved with her husband, Michael, when he transitioned from dean of MU’s College of Arts and Science to provost at Texas A&M–San Antonio.

The VMS board vets both mentors and entrepreneurs before they can become part of the system. MIT had around 300 mentors for 275 companies when the team from Missouri visited.

Tucker doesn’t think Columbia can facilitate quite as large a program. Then again, he’s not in the business of putting a cap on potential progress.

“The intent is to keep those entrepreneurs here. Dr. Foley was very strict that this be a community program,” Tucker says. “We can’t just create entrepreneurship at Mizzou. We need Stephens College, Columbia College, the Chamber of Commerce, the Main Street businesses . . . It’s relatively easy to scale because, as we continue with the program, many of the mentors we have will become lead mentors, which will allow us to take on more entrepreneurs.”

Tucker says he first became involved with entrepreneur incubation in St. Louis at the start of the 2000s. Back then, Chicago and Boston swept up any innovative technology and thinkers that came out of the local universities. Those cities just had a better foundation in place to support such ventures.

As the decade went on and St. Louis and Kansas City built their own infrastructures, they started plucking the best and the brightest from Columbia.

“If it wasn’t for resources like this, I might have started my startup on the West Coast,” Hill says. “Mentorship is like a magnet that keeps these entrepreneurs inside these communities.”

Jonathan and Jayme Cisco were among the first clients at the Mizzou VMS. Jonathan, assistant director of the Campus Writing Program at Missouri, was at a faculty meeting before the VMS launch, when representatives were putting out a call for entrepreneurs.

Jonathan and Jayme just so happened to be in the midst of launching Cisco Consulting, an academic consulting firm for graduate students and faculty members.

“It almost seemed too good to be true,” Jonathan says. “You’re getting in front of a group of successful entrepreneurs, pitching your idea, and having them help you along the way.”

Kim Harrison and Olivia Vann, of 2BuyAg, came to the VMS in a slightly different way. They gave a pitch for their burgeoning business — a mobile application that connects farmers and food-buyers — at the end of an eight-week boot camp put on by the Small Business and Technology Development Centers.

O’Brien was in the audience for the presentation and approached Harrison and Vann about bringing their idea to the VMS.

“With the mentoring sessions, we have an hour-plus to get feedback and good questions from people that have had a lot of varied business experience,” says Harrison, 2BuyAg’s co-founder and CEO. “That’s really what we were looking for: some good, solid questions challenging us on our thought processes, and to do it in a timeframe where we actually have the time to have some good conversations.”

Each project gets a team of mentors so the advice received comes from different areas of expertise, rather than just one source. And, even if none of the mentors are especially versed in some aspect of a startup, they all know people who are. Cisco Consulting wanted to explore the possibility of adding an eCourse, to supplement their in-person workshops, and creating an informational video for its website. None of the company’s mentors had intimate knowledge of either area, but Jayme says they were instrumental in putting her and her husband in touch with the right people.

“There were phone calls to pick their brains on how they did it, how they succeeded, and what they learned over the years,” Jayme says. “They helped us set up meetings with people who would be potential clients just to pitch them the idea and get their feedback. That would’ve been virtually impossible without all the different individuals in that room.”

The needs vary from company to company, but most come to the VMS seeking guidance on marketing, financing, and how to plan for possible growth. Gary Lee, a VMS mentor and chief technology officer at Veterans United, says many also come needing help narrowing their focus.

Lee says he’s currently involved with four projects. Hill is in on two. Joe Henderson, president at Central Bank of Boone County, has a few on his plate. All of the mentors involved are busy with their own businesses, but they still find the time to lend a hand. They’d have wanted someone to do the same when they were just starting.

“Entrepreneurs don’t know what they don’t know,” Henderson says. “It’s like going down the highway and not knowing there’s potholes in front of you. We’re trying to help them avoid those potholes as best we can. Part of our responsibility to the entrepreneur is to ask a lot of questions, make them think about these potential potholes and say, ‘There’s stuff coming at you. How are you going to deal with that?’”

It’s Florence, by way of MIT and MU.

“What we really do is kind of centralize that coaching or mentoring relationship,” Bier says. “There’s really one phone call that needs to be made to get in front of a pretty diverse group of coaches, mentors, or entrepreneurs. That’s the real advantage that VMS fills. It puts you on a path to meet people that you need to be meeting.”