Two is Enough for Me

The stories of two young Columbians who care deeply about the intersection of the LGBT community and faith.

Rob Roach and Kaitlyn Kohley have never met. Despite being comparable in age, they grew up in different towns, attended college in separate states and have led very independent lives. Yet in 2016, the two young professionals share the same city streets, expound kindred values and live and breathe a parallel passion.

Both Rob and Kaitlyn care deeply about the LGBT community and love their faith. After personally coming to terms with how the two intersect, they each share a desire to tell their stories in hopes of helping others who struggle with similar questions. Meet Rob Roach and Kaitlyn Kohley. 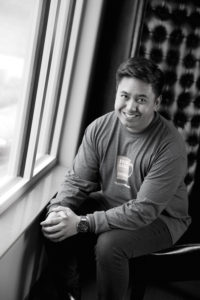 Rob is not a fan of people putting others in boxes and then denying it. He prefers to live his life based on becoming the kind of person he wants to be, not the one the world expects him to be. A self-proclaimed over-achiever, it’s a motto he not only verbalizes as an adult but has lived out in his everyday decisions since childhood.

Rob was born in Columbia into a life of humble beginnings. His mother was born in the Republic of Palau, came to the United States at the age of 13 and gave birth to Rob five years later. She worked two jobs while going to school in order to support her young family. Rob says he never knew he was without as a child, but he always knew he was different.

Sitting comfortably in his office at Caledon Virtual, Rob recalls the time he belted out Aretha Franklin’s “Respect” at age 6 and his tendency to talk a lot. “I was always interested in what the girls around me were interested in,” he says. “But I was also athletic and enjoyed playing sports.” Rob admits to shutting out those differences while a student at Russell Elementary, in part because of the love of his family.

Rob says his mother, Nelly, as well as his father, J. Michael, who formally adopted him in the fourth grade, raised him to do his best and have no regrets. “They were always supportive and even though I knew I was different, I grew up thinking being different was normal.”

By age 10 or 11, the dark-skinned, dark-haired Rob says he was learning more about who he was than who he was attracted to. While a student at Smithton Middle School, he admits being captivated by both Beyoncé and Serena Williams. “I loved music and tennis and knew they had values I wanted.” He describes Serena as tenacious, fierce and confident. “I found those characteristics attractive,” he says.

Rob, described in his company bio as perceptive, brilliant and clever, recalls desperately wanting the new Beyoncé CD but says his family was conservative and listened to mostly Christian music. “My dad said if I could beat him in tennis, I could get the CD,” Rob shares. “I was determined, so I did.”

While having the courage to be himself and go after what he wanted was easier at home, Rob remembers being bullied and called every name in the book at school. The result? “I was smart and hardworking, but I started changing to survive, to fit in.”

Rob notes that by the time he reached high school, however, he found his love in tennis. “Being alone on a court with a tennis racquet was me,” he says. “I had found me.”

While growing physically and developing mentally, Rob was also discovering his faith. He remembers showing up at the neighborhood church as a child to get candy and sing with the choir. “I was a strong, devout Christian,” he says. “I even helped bring my parents to faith.”

Rob knew from growing up in church that many saw homosexuality as a sin. And that’s where his real wrestling began. Leaving West Junior High, Rob knew that he was gay. “I denied it for social conformity,” he says sincerely. “I mean how do you reconcile denying yourself or denying your God?”

Looking back, Rob sees things much clearer. Past the emotions of his years at Rock Bridge High School, Rob describes the revelation that changed everything for him. “I realized that if I deny who I am, I am denying my God.”

That one statement gave Rob the courage to live fully as himself while still embracing his faith. Thanks to a scholarship opportunity, Roach packed his bags the fall of 2010 and headed to Azusa Pacific, a private, evangelical Christian college in the suburbs of Los Angeles. He was ready to tackle the next chapter of his life.

Although Roach felt free internally, he still kept his sexual orientation a secret from his family and friends. Near the end of his freshman year, his best friend went public after reaching a top leadership position within the Christian university. “He came out of the closet to show that you can make a difference in people’s lives whether you are gay or straight,” Rob says.

The action resonated with Rob, who knew he had leadership abilities, but didn’t know how to unleash them given the secret he was carrying. So one day after chapel, he made the decision to tell his friends the truth. The reaction was one of empathy to his internal struggle. “They wept,” he shares.

The next step was to tell his family and friends in Columbia. That step took a while longer. “I wrestled, researched and prayed about it,” Rob says. “I’d garner confidence and then I’d get scared.”

Finally on a trip back home, his parents pinned him down and made him talk. “My mom told me she knew what it was and that I just needed to voice it,” he says. “So I did. It was so rejuvenating for me. It catapulted me to the next level.”

From there, Rob finished his degree with a double major in pre-med biology and marketing and a minor in Biblical studies. He chose to pursue marketing and moved home to join his parent’s business as an account executive. At the end of 2014, Rob met his boyfriend, Brandon Stotts. “He has softened me,” Rob says with a smile. “I’d bulldoze people otherwise. He’s helped me gain empathy and add that to my leadership skill set.” 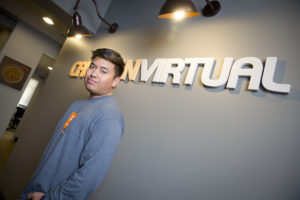 Now that Rob feels settled, it’s time to think about the future. “I’ve been brought up to believe that something you do needs to be about goodness, about adding the lives of others,” Rob says, his dark eyes sparkling with excitement. Feeling grounded in who he is and what he believes, he wants to pass that confidence on to others like himself. “I’m searching to invest in other Rob Roach’s,” he shares.

His passion runs deep. “I’m a homosexual, and I’m a Christian,” Rob continues. “I’ve proven to myself that I’m both. That powers me to have a mission to bring our two communities together.” While Roach is in the beginning stages of determining how to accomplish his idea, he is enthusiastic about his calling and values.

“It’s an issue about inclusion,” says Rob sitting up straighter in his chair. “I have influence over two groups of people who don’t agree. That’s a sign. I want to bridge that divide and help people open their minds to other views,” he says. “Differentiation progresses.”

While he figures out the next steps, Rob will continue attending church, working with clients, spending time with family and friends and volunteering for Women’s Network. “I’m happy with my community. They may not continue to be happy with me,” he says, “but I plan to keep challenging them.”