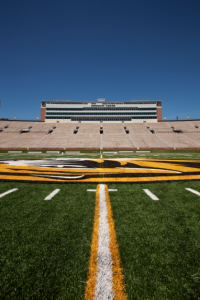 The business of higher education has become a multifaceted, multimillion-dollar market. One of the ways a school makes money is by selling its licensed and trademarked property or permission to use it.

To make sure they’re not losing an opportunity to make money, schools hire private companies to monitor and secure their licensing and trademarks agreements. Some colleges, such as the University of Missouri, hire these outside companies not only to do the aforementioned task but also to create and shape the their licensed properties. They also have their own internal departments to work alongside the outside contractors.

For instance, Mizzou is partnered with Learfield Sports for multimedia rights. Learfield also manages the exclusive multimedia rights to 98 other collegiate properties. However, the university is partnered with Learfield through a subsidiary called Mizzou Sports Properties. MSP is the media rights holder for Mizzou that executes customized market strategies for the school with campaigns in radio, television, signage, print, social media and the website MUTigers.org.

Mizzou does not partner with Learfield or its subsidiary, MSP, for athletic licensing and its trademarked properties, such as athletic merchandise. The university uses the Collegiate Licensing Co. for that, along with the internal campus licensing office, Chad Moller, of Mizzou Athletic strategic communications.

CLC provides services for brand management, brand protection and brand development to more than 200 collegiate institutions throughout the country, according to its website, clc.com. It is the trademark licensing affiliate company of IMG College and has been in business for more than three decades. Its brands comprise nearly 80 percent of the $4.6 billion retail market for collegiate licensed merchandise.

Regardless of academic or athletic purposes, the university is very selective about using its trademarked logo. The college requires all individuals, organizations, departments and companies, both internal and external, to obtain prior approval before producing anything with the Missouri University indicia, according to its licensing information website, licensing.missouri.edu.

The licensed individuals who have permission to use Mizzou’s name or image are able to profit from their products, but they pay the university in the form of license fees or a percentage of the companies’ profits. Any unlicensed users of the MU trademark material will usually receive a cease and desist letter once they are discovered from the CLC. Some of the schools that have gotten this notice are Frenship Independent School District of Texas, as well as Green Forest Public School and Bentonville Public Schools of Arkansas.

The school has four trademarked helmet signs, three seals, eight tiger marks, multiple color combinations of gold and black and the mark of its mascot: not the ferocious looking tiger with fangs but the rendering of someone in a cartoonish tiger suit.

Licensing is not just the Mizzou name and merchandise but intellectual property, too. In recent years the university has spent hundreds of millions of dollars on commercial services, public service and contracts. Through this work the school has filed 365 U.S. patents and signed 227 options and leases for new technologies that MU faculty and students have invented and private companies have licensed and started making profits from.

“The goal is seeing these innovations benefit society,” says Chris Fender, director of the Office of Technology Management and Industry Relations. “Sometimes the best way to do that is to facilitate private investment in the development and commercialization of new products based on the technologies developed by academia. There are several products that we use every day that were developed by universities.”

The process for the school’s licensing of intellectual property from the academic departments is mostly done through Fender’s office, he says. First the school’s researcher fills out an investment disclosure form that is reviewed by the Office of Technology Management and Industry Relations.

The office analyzes several factors before making its final decision, such as where was the funding source used to create the researchers innovation, or is there anything prohibiting getting a patent? They also look at potential markets for the innovation and how much development will be required to produce a product.

Research and innovation in academia is slightly different from research done by a private company, Fender says. The college does the early stages, but once a properly vetted business is allowed to invest, it is responsible for product testing and trials. It also has a hand in developing the final product.

A license agreement just grants the company the rights to practice the intellectual property that surrounds a particular innovation developed by the school. But if the school has a patent on an item, then it has to grant the investing company the ability, or rights, to use, make and sell the item.

The school requires the investing company to have a good business plan to be able to purchase the license to use intellectual property. For example, if a company was investing in a pharmaceutical innovation developed by the school, then the company would have to file the new drug application to get some sort of regulatory approval authority so it could get to a phase one clinical trial. It would also need to agree to put the final product on the market in a certain amount of time or make a target number of sales before a certain amount of time.

“It is definitely an extensive process,” Fender says about licensing. “I think it’s a good source of revenue for the university. However, I think the No. 1 goal is to see that we can develop pathways to facilitate the commercialization of these innovations that are the result of the good work that our researchers do.”

High schools also have the same license and trademark agreements but not for their research as much as their athletic merchandise.

See defines intellectual property management as the management of an entity’s marks, logos, name and images in all tangible or intangible assets. This management is for the purposes of legal protection for the entity to provide a controllable environment through precise definition of policies, procedures and protocol for the use of said marks, logos, etc.

Kelly Sports Properties offers five-year contracts to schools’ athletics and activity programs or anything that falls under the Missouri State High School Activities Association. The company covers anything “from middle school track and band to high school football and debate,” See writes.

He also gives three reasons why the company provides its services to schools. According to See, the reasons are as follows, in order of importance: The first is it will allow a district to become more compliant and provide equity to all programs. Second, it provides the protection of the marks and logos in the area of licensing. And finally, the program will generate revenue at a level greater than the efforts of the past. If See’s reasons are to be taken seriously, then Kelly Sports Properties is one of the few private companies whose foremost reason for existing is not to make money.