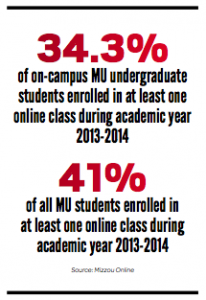 A positive approach has found its niche at the University of Missouri.

Former MU head track and field coach Rick McGuire’s online master’s degree program with a focus on positive coaching is a star of sorts in the university’s online lineup. Dubbed the “positive coaching” degree — though it’s formally a Master of Education in educational, school and counseling psychology with a focus on positive coaching — the program has grown 1,300 percent since it launched with seven students in the summer of 2012. Some 98 online students enrolled last fall in the program, billed as a fusion of the best ideas and techniques from coaching, sports and positive psychology.

“It’s a niche area,” says Stacy Snow, Mizzou Online’s assistant director and director of marketing. “It’s a Master of Education that you can’t get very many other places; maybe a few schools nationally focus on what it means to be a positive coach in life.”

Clearly, MU is participating in the distance education boom of recent years. The university now offers 95 programs online, including 70 bachelor’s, master’s and doctoral degree programs and 25 certificate programs. Yet, a high-profile development in that revolution — massive open online courses, or MOOCs — is decidedly on MU’s back burner. Mizzou Online administrators say the university is instead concentrating on making its degree programs available online as well as developing niche opportunities. Health-related programs in particular are in demand, comprising three of MU’s seven fastest-growing online programs. Indeed, the university plans to launch a new public health master’s program this fall in response to student interest.

Although the “Year of the MOOC” proclaimed by The New York Times in 2012 has ended, the free or low-cost online courses continue to offer alternatives to traditional higher education. In February 2013, Coursera became the first MOOC provider to earn the American Council on Education’s credit recommendation for a course. About a dozen MOOCs from various providers have since been endorsed, and the association anticipates more will receive a credit recommendation, says Cathy Sandeen, ACE vice president for education attainment and innovation.

How ACE’s roughly 1,800 member institutions will react is unclear. The association does not track whether MOOC students completing endorsed courses ultimately receive credit toward traditional degrees, but as of mid-June ACE had responded to 23 requests for transcripts demonstrating completion of credit-recommended courses, according to Sandeen. She cautions that each institution determines on its own whether to confer credit for MOOC courses.

Mizzou Online administrators say the university probably will not be among those awarding credit for MOOCs. That’s not for fear they would prove to be disruptors; Mizzou Online Director Kim Siegenthaler says MOOCs do not compete with university courses. But she points out that even institutions that help offer MOOCs generally don’t award credit for the courses. As for developing MU MOOCs, Siegenthaler says there has been only “scattered conversation” on campus about the possibility. Given general estimates that developing a good MOOC would cost at least $50,000, Siegenthaler adds that the university would need to see a clear benefit for both students and the institution before moving ahead.

MU’s stance toward MOOCs is common to many higher education institutions, Sandeen says, and she agrees MOOCs are not the disruptors that early hype predicted. Rather, she believes MOOCs add to the diversity of the online education system.

“It’s really one more tool in our toolbox to help all sorts of students increase their education,” Sandeen says.

Right now, MU is focusing on integrating its distance education offerings into the campus mainstream while continuing to build its credentialed online degree and certificate programs. That integration involves making the resources that are available to traditional on-campus students — such as materials housed in college libraries — accessible to online students as well, Siegenthaler says. Siegenthaler, who stepped into the permanent director’s position last spring, plans to reach out to various campus departments to see how she can support their efforts to serve online students.

“But in reality, when we think about meeting those needs of distance students, it’s also a benefit for the campus student,” Siegenthaler says. “Because now I [as a student] don’t have to worry about when the library’s open or going by there when I happen to be on campus or in between my classes. I can access those resources 24/7 from my dorm room or from my apartment or from my house in California or Alaska or Texas or Jeff City.”

Among them are niche courses such as the master’s degree highlighting positive coaching. Pointing as well to MU’s fairly uncommon online M.S. in agriculture education program, which grew in enrollment by 175 percent between 2011 and 2013, Siegenthaler says, “In our conversations with academic units, we’re beginning to look more for those programs that are not necessarily unique to MU but are not widely represented in online offerings.”

Online health care-related degrees and certificates also are booming. Taken as a whole, enrollment in MU’s 14 health-related programs grew by about 13 percent between fall 2011 and fall 2013. But a few of those programs grew by a significantly larger margin. For example, enrollment in the bachelor’s degree in health sciences program increased by 234 percent, going from 29 students in the fall of 2011 to 97 students in the fall of 2013. Enrollment in the online nursing practice doctoral program rose by 61 percent during that period, growing from 98 students to 158 students. And enrollment in MU’s online graduate certificate in public health jumped by 142 percent between 2011 and 2013, going from 19 students to 46 students.

“The certificate has been offered online for a while, and finally we’re following up with the whole big degree,” Saffran says.

Saffran attributes the increased interest in online public health education to a combination of demand and workforce demographics. The Bureau of Labor Statistics predicts that demand for medical and health services managers will increase as America’s baby boomers age. Employment of those health-related managers, who commonly earn public health master’s degrees, will grow by 23 percent between 2012 and 2022, considerably faster than the average for all occupations, the BLS projects.

Demand for public health workers is likewise rising in the state of Missouri, Saffran says, as is public understanding of the importance of the field. Moreover, a great many public health master’s degree students work in areas throughout the state that are far from university classrooms, and forcing public health workers to leave their jobs to earn additional credentials would be detrimental to the community, she says.

“One of the reasons we’re starting our master’s online is that people are so interested,” Saffran says. “So we said, ‘Wow, we really need to do this.’”