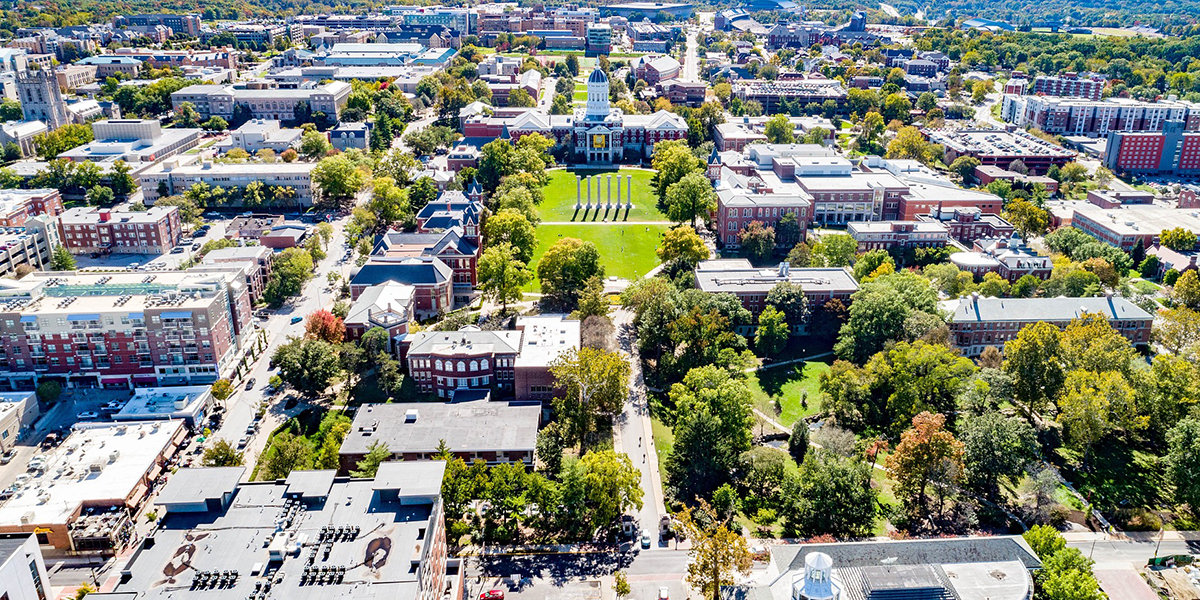 A dizzying spate of historic buildings meeting the wrecking ball on the edges of Mizzoui’s campus last spring and summer galvanized a group of residents already alarmed by the loss of historic structures around Columbia.

One result of residents putting their feet to their feelings about losing historic buildings was the formation of CoMo Preservation, a grassroots group that has an eye on becoming a 501(c)3 nonprofit organization with the ability to upcycle the city’s collection of architectural salvage products currently in storage at a Parks and Recreation building. But foremost, CoMo Preservation aims to develop educational resources and expertise to help individuals and institutions discover alternatives to tearing down pieces of the city’s history.

The group first met on May 7 in the J.W. Blind Boone House in Columbia after Dianna Borsi O’Brien and Trevor Harris talked over their shared vision about ending the demolitions and protecting other historic structures from future demolition. Dianna, author of “Historic Movie Theaters of Columbia, Missouri,” and a former adjunct journalism professor at Mizzou, already knew Trevor from when he was on the city’s Historic Preservation Commission.

‘We need to get this done.’

Trevor, who operates The Recollection Agency, a company that produces audio and video recordings of family and institutional histories, also owns and restored a pair of 101-year-old bungalows in Columbia.

“We talked about starting this kind of group years ago,” Trevor says. “This last May, we said, ‘We need to get this done.’ A big piece of it was motivated by the series of demolitions” at MU and in the Old Southwest neighborhood.

“A working building is a saved building,” Dianna says. “If a building doesn’t have a job, it doesn’t have a future.” The Blue Note and the Missouri Theatre are prime examples of historic buildings that are still in use. “They’re still here. They still have a job.”

But the list of historic properties that stand vacant and, in many cases, without regular maintenance, is noteworthy. The Hall Theater on South Ninth Street is a local icon that is empty except for echoes of the past. Love of history is a noble sentiment, but when buildings help define the character of a block, a community, a neighborhood, and a city, they also are important to the economy, she explains.

“Business, the economy, history,” Dianna says, entwining her fingers to illustrate how historic preservation increases business activity. “They go like this.”

For example: When visitors come downtown to attend an event or performance at the Missouri Theatre, they bring business downtown.

“We have a thriving downtown because we have historic buildings,” she adds, “and literally the majority of our downtown buildings are historic.”

“Columbia became more and more fascinating the more I learned about it,” she says.

When Dianna met with Trevor to talk about creating an organization, she remembers thinking, “How hard could this be?” She laughs, then laughs again. “We called everyone we knew” for the first meeting in May,” she recalls. “I basically thought it would be just us there, eating marshmallow treats.”

Twenty people attended the inaugural meeting. The group didn’t yet have a name but quickly filled a list with ideas and goals. Dianna said she had heard that it takes 15 years to become “an overnight sensation.” At the group’s November meeting, she declared, “We only have 14 and a half years to go.”

It’s that light-hearted but realistic approach that earned Dianna the group’s trust, from its recent roots as the Historic Preservation Alliance of Columbia to the new name, CoMo Preservation. The group has also made valuable connections with other preservation-minded individuals and organizations, as well as the architects of demolition plans.

The October meeting featured the group’s new name and a presentation from Gerald Morgan, Mizzou’s director of space planning and management. He addressed MU’s demolition process and explained that the bulging cost of deferred maintenance – the result of state budget cuts – has put some buildings on the literal chopping block.

The minutes of that meeting summarized Gerald’s presentation, with the context that structures among Mizzou’s “education and general buildings” receive funding from state appropriations and tuition reserves. Seventy percent of the budgets for those buildings came from the state coffers in the 1990s. By 2016, state appropriations accounted for less than 20 percent of budgets for those buildings. During that time, annual maintenance ballooned to about $35 million. As those needs are deferred, the price only goes higher, Dianna says.

Meanwhile, an independent consultant conducts a survey of facility conditions every five years. That process includes a Facility Condition Needs Index, or FCNI, that measures a facility’s needs by a percentage rating. Based on the cost for maintenance and repair, replacing important systems like heating and cooling, or replacing roofs, any building with a rating of .4 or higher should be listed for renovation or demolition.

As of October 2022, MU had about 50 buildings on that list. In 2014, there were 34 buildings listed. The Mizzou North facility off the Business Loop – the former Ellis Fischel Cancer Center — needs about $50 million in repairs to bring the building up to code. MU officials said the cost to demolish the building is estimated at $5 million.

‘MU is not the demon here.’

In 2020, the space needs analysis resulted in marking almost 632,000 gross square feet of space for demolition. The building demolitions that occurred in 2022 were the start of that elimination process. The demolitions included Columbia’s first hospital, MU’s first women’s dorm, and several other buildings. MU officials stated in a news release that the first phase of the plan would save the university more than $93.7 million in repair and maintenance work and more than $2.5 million in annual operating costs.

Dianna said the presentation helped the CoMo Preservation group understand that buildings need repairs and new systems installed, but donors who write checks with seven figures or more want their names on new buildings, not on preserved and restored buildings, and not to provide new HVAC systems.

“I believe MU was as traumatized by their demolitions as the community was,” she explains, pointing at the Missouri General Assembly’s budget cuts that have led to the point of demolition. “They have basically written the death warrants for many buildings. I don’t think MU is the demon here.”

Furthering CoMo Preservation’s momentum, the group’s December meeting had an engaging virtual presentation from Bob Yapp, a former PBS television host on “About Your House.” Bob has taken on numerous preservation and rehab projects in the past few decades. He and his wife opened a trade school in Hannibal — the Belvedere School of Hands-On Preservation — to educate young people skills needed for historic preservation trades, including plastering, brickwork, carpentry, and similar jobs.

“He sees this as a viable career option,” Dianna explains, “particularly for young people who may not know what career path they want.”

She’s eager to see some of those new craftsmen gravitate toward Columbia.

“Everybody is really busy replacing windows,” she says. “Or they’re ripping them out and putting them in the landfill. If we had craftsmen who could” [preserve those windows] “it would decrease costs and decrease waste in our landfill.”

The Jan. 31 meeting begins at 7 p.m. in the Friends Room at Columbia Public Library. The presenter will be Barbra Horrell, one of the founding members of the organization that established Columbia’s African American Heritage Trail.

What the future holds.

“Right now, we’re educating ourselves on what is doable and what’s possible,” Trevor says. “I think down the line, I’d like to see landmark properties and historic districts that are locally designated and carry with them a set of design standards that the owners have willingly signed on for, because they understand the importance of preserving historic properties.”

Trevor heads up an advocacy team, one of CoMo Preservation’s four subgroups. Other subgroups include focuses on structure, sustainability and salvage, and education. Among the recommendations is creating a list of artisans and craftsmen who can do the specialized work needed to help maintain and restore historic properties. The group is pursuing nonprofit status that will be needed for future fundraising and selling architectural salvage. The group is drafting an operating agreement for that option.

In the last decade, Historic Preservation Commission members and allies have helped salvage parts of buildings slated for demolition. That meant going in and taking out windows, doors, radiators, trim work, built-in tables, and other significant architectural elements. Those items are now “squeezed into a Columbia Parks and Rec storage barn,” Trevor says.

The city’s legal team determined the city’s commission lacked the authority to sell those items.

“Maybe one of our best functions we can perform is to help unlock the trove of architectural elements that the Preservation Commission has but can’t sell,” he adds, noting that there are ongoing discussions with city staff about “how to liberate that salvage and get it into peoples’ homes as they’re doing interior and remodeling work.”

CoMo Preservation is also fostering connections to collaborate, when possible, with similar groups and others with related roles.

“There is no one organization devoted to just Columbia’s historic buildings,” Dianna says. “Other organizations working to preserve history have larger areas to cover.”

Activism is in its DNA.

For example, the Boone County History & Culture Center covers the entire county. The State Historical Society of Missouri focuses on the entire state. The task force that created the African American Heritage Trail in Columbia is dedicated to structures along that route. And the city’s Historic Preservation Commission is limited as an advisory panel to the city council and is not a citizen’s advocacy group.

Representatives from some of those entities have met with CoMo Preservation to explain their roles and to discuss collaborating on public education about the benefits of preservation. Dianna says the group will seek to support rather than compete with the other organizations.

“None of them are set up to do activism,” she says, “but many of our missions are the same. We all want a historic, vibrant city. Our goal is to create a culture of historic preservation in Columbia.”

Meanwhile, CoMo Preservation is still looking for a regular meeting place to call home. The group’s Facebook page and website is updated regularly with meeting information.

“What we’re not aspiring to do,” Trevor explains, “is take Columbia and dip it in amber and have it frozen at a certain point in time. What we do want to do is educate people about the power of preservation.”