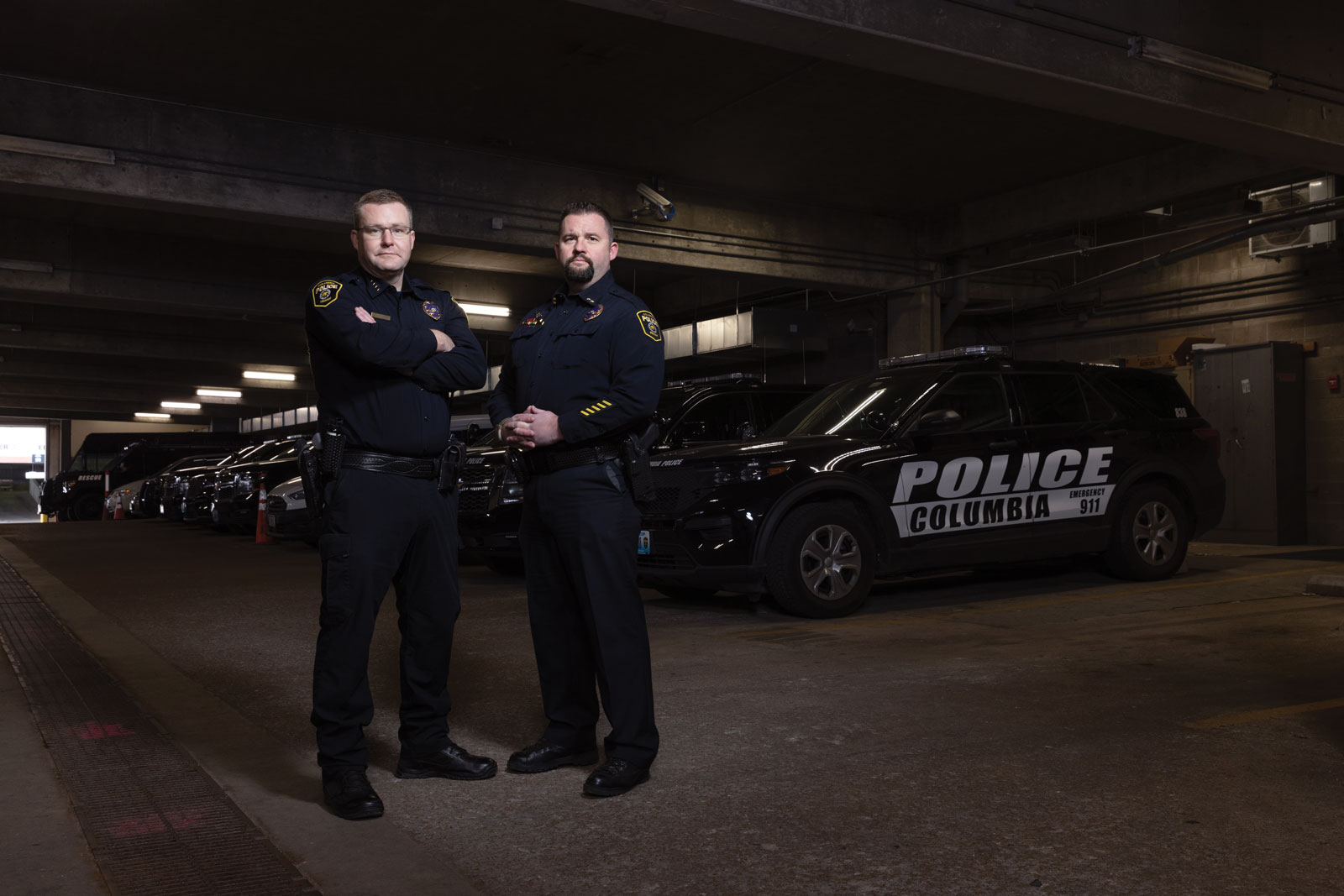 Heroes for Our Heroes

Columbia is competing with others for trained police officers.

It’s been almost 20 years since Jeremiah Hunter left the Jasper County Sheriff’s Office to join the Columbia Police Department where he is now the assistant chief. He remembers there were nearly 200 other applicants for a few open positions with the Columbia police force.

The reality now facing the CPD, as well as most other municipal, county, and state law enforcement agencies, is a dearth of jobseekers looking for work as a law enforcement officer. Combine the shortage of cop candidates with lagging wages and extraordinary public scrutiny of police and police departments — “everyone’s got one of these,” Jeremiah says, holding up a smartphone — and the challenge to recruit and retain officers is magnified.

These days, instead of 200 cop job applicants for open positions like it was 20 years ago, or the 20 to 25 applicants just three years ago, “now you get five or 10,” he says.

“Staffing is a moving target,” he adds. “Our staffing shortage ebbs and flows.”

The CPD has funding for 191 sworn, commissioned patrol officers among the 248 full-time positions budgeted for fiscal year 2023 — compared to 210 positions in 2018. The growth has come through additions to patrol staff in addition to detective and investigative units, as well as records custodians and other positions that do not require the training to become a commissioned officer. As of early November 2022, the department had about 20 vacancies for commissioned officers, with another nine new hires in field training, others on family leave, and “a significant amount” with military reserves training duties or military deployment, Jeremiah says.

Meanwhile, starting pay for a Columbia police officer is $24.56 per hour or just over $51,000 annually. The starting pay for a University of Missouri police officer is roughly $54,000 or higher for an experienced officer, and a Boone County sheriff’s deputy will start — depending on experience — in a range from around $51,000-$57,000 per year. Both MUPD and the sheriff’s office also offer perks CPD does not have.

For MUPD, it’s health insurance and a tuition discount for employees and their families, and for the Boone County Sheriff’s Office one of the benefits is its take home car program, saving employees on fuel and vehicle expenses.

“We need to be a little bit more aggressive with our salary and benefits,” Jeremiah says, noting that the city has commissioned a study comparing salaries, benefits, crime rates, and other factors with 20 “benchmark cities” of similar size and with sizeable college and university populations.

“A lot of them pay more. A lot of them have more officers than we do,” he adds. “As far as recruiting, we’re all in the same boat. We’re all after the same people.”

The Missouri Police Chiefs Association reports that the average starting pay for a law enforcement officer in Missouri is between $53,800-$55,200. The state’s two largest cities — Kansas City and St. Louis — have starting wages of roughly $60,200 and $58,300, respectively. The third-largest city, Springfield, has a starting salary of $58,000. As the fourth-largest city, Columbia’s population of roughly 127,000 is about 5,000 higher than Independence, the fifth largest, which has an average starting wage of $68,000.

O’Fallon in St. Charles County comes in No. 6 in population with 94,000 residents but leads the salary scale with a $69,000 starting wage. Some smaller communities are comparable with Columbia. The Lincoln County city of Troy, with around 14,000 residents, and Rolla in south-central Missouri has about 20,000 residents. Both of those cities have starting cop salaries like Columbia.

State budget figures for 2022 show that the starting wage for a Missouri Highway Patrol officer is around $52,000, with the Missouri Department of Public Safety at the bottom of the scale with starting pay of $42,900.

Focusing on Columbia, Matthew says CPOA’s collective bargaining process with the city has repeatedly sought to address “the pay disparity between CPD and other surrounding agencies.” For example, the Jefferson City Police Department’s starting pay is similar to Columbia’s, Matthew says, but Jefferson City is offering a $10,000 incentive for lateral hires — trained officers with prior experience with other departments and agencies.

“Money always talks,” he adds. “Money is always going to be a big motivator for people. If the city came forward with the money to pay in a competitive market, that would mean a lot.” Matthew also has qualms with the decision-makers — the city’s elected officials — who control the purse strings, claiming, “The city council does not appreciate and value the police department.”

Matthew, who soon begins his third year as CPOA president, says retention is as much an issue among the rank-and-file as recruitment.

“If there was better show of support from city leadership — specifically elected individuals — I think that would help with retention to a large degree,” he says.

Salary and benefits are not the only issues with staff size.

“The process to even get hired is probably four months. And that’s fast,” he says, noting that a voice stress analysis, psychological exam, and comprehensive background check are among the steps involved in the hiring process. If the new hire is not POST-certified (the acronym for Police Officer Standards and Training Program), then a four-month stint in the Law Enforcement Training Academy is required to get the certification. After successfully graduating from the academy, the officer will go through three months of field training.

“You’re looking at a year” for that process to run the course, Jeremiah says.

Police Chief Geoff Jones says the hiring and vacancy situations are not unique to Columbia.

For Geoff, his barometer for optimism about a deeper pool of future police officer candidates is the larger classes at the training academy at the Law Enforcement Training Institute at the University of Missouri. The academy offers training in excess of the 600 hours of basic training required for Class A, POST certification.

“There is an uptake” in interest, she says. “And we’re expecting another uptake in January.” A scholarship program championed by Gov. Mike Parsons “seems to have incentivized” and boosted interest in law enforcement officer training, Johnson concludes.

Most students in the academy are getting training for jobs they’ve already been hired for, such as the case with new Columbia police trainees. For those who do not yet have a job in law enforcement, Johnson says the academy has a 95 to 100 percent placement rate.

Of course, there’s a way around waiting for an officer to be trained.

“The alternative is hiring police officers from another jurisdiction,” Jeremiah explains. In fact, that has happened more than a few times; specifically with hires from the Moberly Police Department.

“We took 90 percent of their officers,” he says. Then he grinned. “It’s a running joke. Don’t go through that town if you’re a Columbia, Missouri police officer.”

Good humor aside, police work is simply a tough task, Geoff says. Especially since the pandemic.

“We have this 24/7 news cycle on social media and the web. It’s very easy to project another agency’s shortcomings on another agency,” he adds. “That’s not to say we don’t have improvements we need to make.” And that’s where community policing comes in to play.

Even officers hired away from other departments must go through some level of field training to become familiar with the practices and principals of community policing, which basically boils down to getting to know the residents and the neighborhoods being patrolled.

“It’s making relationships. That is the crux of it,” Jeremiah says. “You have to know the community you’re policing. And not everything requires handcuffs.” Instead, it’s a practice that gives officers “training and resources to solve issues without enforcement action.”

Still, there’s that public microscope and scrutiny that wasn’t so ubiquitous until a few years ago. Jeremiah again points to his smartphone.

“Everything you say and do is recorded. And we’re the face of the government,” he says, adding that even though police departments are apolitical, they are “an easy target for public resentment,” even for abuse of force and other high-profile incidents in other parts of the country.

“We felt the effects here,” Jeremiah says. “It only takes one incident” for all police and police department cultures to be scrutinized.

That’s why Matthew says it’s vital for police to have both monetary and institutional support from city leaders.

“The CPD is filled with unbelievable men and women — truly phenomenal community servants,” Matthew says. “It’s really going to come down to the city seeing the benefit to pay our people more to recruit and retain. And I don’t know when that’s going to come to fruition.”

Meanwhile, Jeremiah says he might have different career objectives if he was starting over.

“I don’t know if I would be a cop today,” he says. “It’s been a very rewarding career. But you’ve got to want to do this job. It takes a special kind of person.”