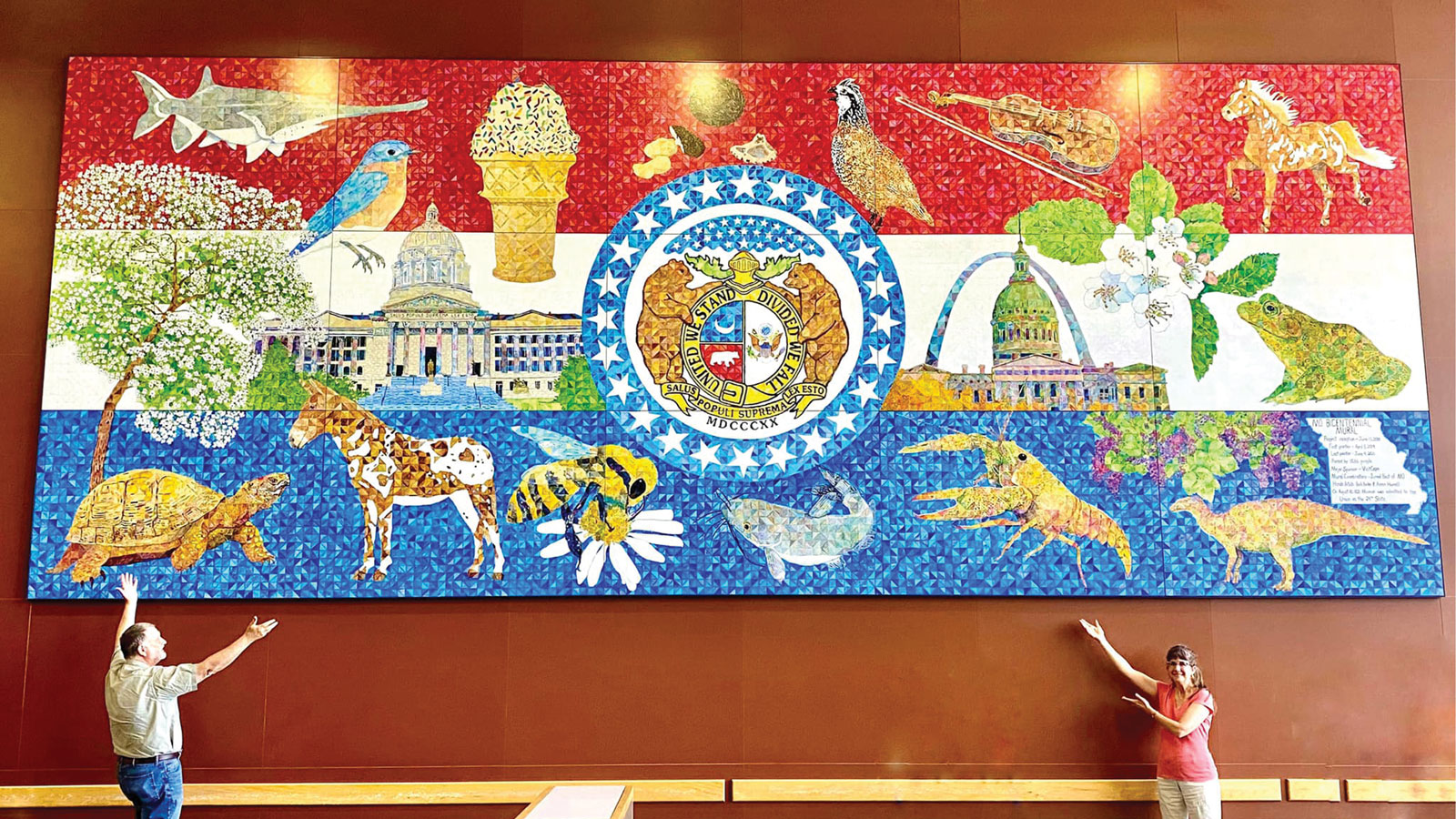 The Missouri Bicentennial Mural, painted by 16,116 citizens across the state, was dedicated on June 23 at the Harry S. Truman State Office Building. The mural features 19 state symbols to commemorate Missouri’s 200th anniversary. Cape Girardeau artists Aaron Horrell and Barb Bailey traveled across parts of the state for several years with canvas and supplies to create a 15-panel mural. Measuring 12 feet tall and 30 feet wide, the public was invited to paint within a small triangle of the mural. The oldest painter was 102 years old, while the youngest painter, with help from a family member, was 12 days old. The project began in 2019, and it features painters from 358 Missouri towns, 30 states, Washington, D.C., and 17 countries. Completed in 2021, the artists donated the mural as a gift to the people of Missouri. The Bicentennial Mural is an endorsed project of Missouri 2021, a statewide initiative of the State Historical Society of Missouri to commemorate the bicentennial and promote a better understanding of Missouri’s regions, communities, and citizens.

DeafLEAD is pleased to be awarded a contract with Vibrant Emotional Health to serve as a core crisis center for the National Suicide Prevention Lifeline. Vibrant Emotional Health (Vibrant), the nonprofit administrator of the National Suicide Prevention Lifeline (Lifeline), has announced more than 40 contracts awarded to local crisis centers across the country to strengthen the Lifeline’s national services. Vibrant’s awarded contracts are a crucial step forward in a transformative and historic time for crisis care. They were made possible through an infusion of $152 million in November 2021 by the Substance Abuse and Mental Health Services Administration (SAMHSA) to Vibrant Emotional Health in preparation for 988, the new 3-digit number assigned by the FCC to the Lifeline to assist all people in mental health or suicidal crisis. The new 988 Lifeline number became accessible in the United States and its territories on July 16.

More than 160 library workers at Daniel Boone Regional Library (DBRL) have overwhelmingly voted to form a union with AFSCME Council 61. The union election was conducted by the Missouri State Board of Mediation in May, when workers voted 101-55 in favor of the union. The new bargaining unit will consist of staff, librarians, and facility workers throughout Boone and Callaway counties at Columbia Public Library (CPL), Callaway County Public Library, Holts Summit Public Library, and Southern Boone County Public Library. Daniel Boone Regional Library Workers United (DBRLWU) first announced intentions to unionize back in early February. Workers began organizing to build a safe and inclusive workplace and address staff issues such as fair and equitable pay, safety, equitable access to information, materials and buildings, and a voice in decisions that affect the library. Throughout the organizing process, workers received an incredible showing of support from library workers around the community and the country.

The Columbia Public Schools Foundation (CPSF) celebrated its 25th anniversary by awarding the Boone County Nature School with a $100,000 grant. The foundation announced the donation during an event at the school in May. The funds will be used for furniture and equipment for the classrooms and lab space at the Nature School. “We’re celebrating 25 years of being rooted in the community, so it’s only appropriate that we celebrate the importance of place-based education today,” said Cindy Mustard, president of the Foundation’s board of directors. “The foundation is proud to be a part of the Nature School’s mission of giving students a chance to explore and learn from nature right here in Boone County.”

The Functional Zero Task Force is a coalition of organizations focused on ending homelessness in Boone County through collaboration, data collection, and resource provision and coordination. After gathering stakeholder input, it was determined that a name change would help others better understand their work and goals. The coalition is pleased to announce their new name, the Boone County Coalition to End Homelessness. Beginning in the 1990s, the Columbia-Boone County Basic Needs Coalition worked to address homelessness in our community. To implement the strategies identified in the City of Columbia’s 2015 Homelessness Summit, the Basic Needs Coalition formed the Functional Zero Task Force. Since then, the task force has grown and evolved into its own entity, focused solely on ending homelessness in our community. Currently, nearly 25 community organizations meet on the second and fourth Mondays of each month to share local resources, review current homelessness data, discuss challenges, learn about the latest programs, and match resources to those on our community’s prioritization list. As the first action under their new name, the Boone County Coalition to End Homelessness is launching a Housing Stability Program to combat our community’s lack of affordable housing.

Boone Hospital Center’s Cardiac Cath Lab is open after an extensive $8.7 million renovation and expansion aimed at better meeting the needs of the patients and community in the present and future. Changes include a new lobby and waiting area, an additional procedure room, 15 patient holding rooms, and new nursing areas with increased visibility between nurses and patients. These changes offer our patients more space, privacy, and safety, and will allow the Cardiology Service Line to continue to support Mid-Missouri’s health care needs. The Cath Lab lobby features a large canvas of a photo by photographer Henry Domke titled “Passing Storm.”