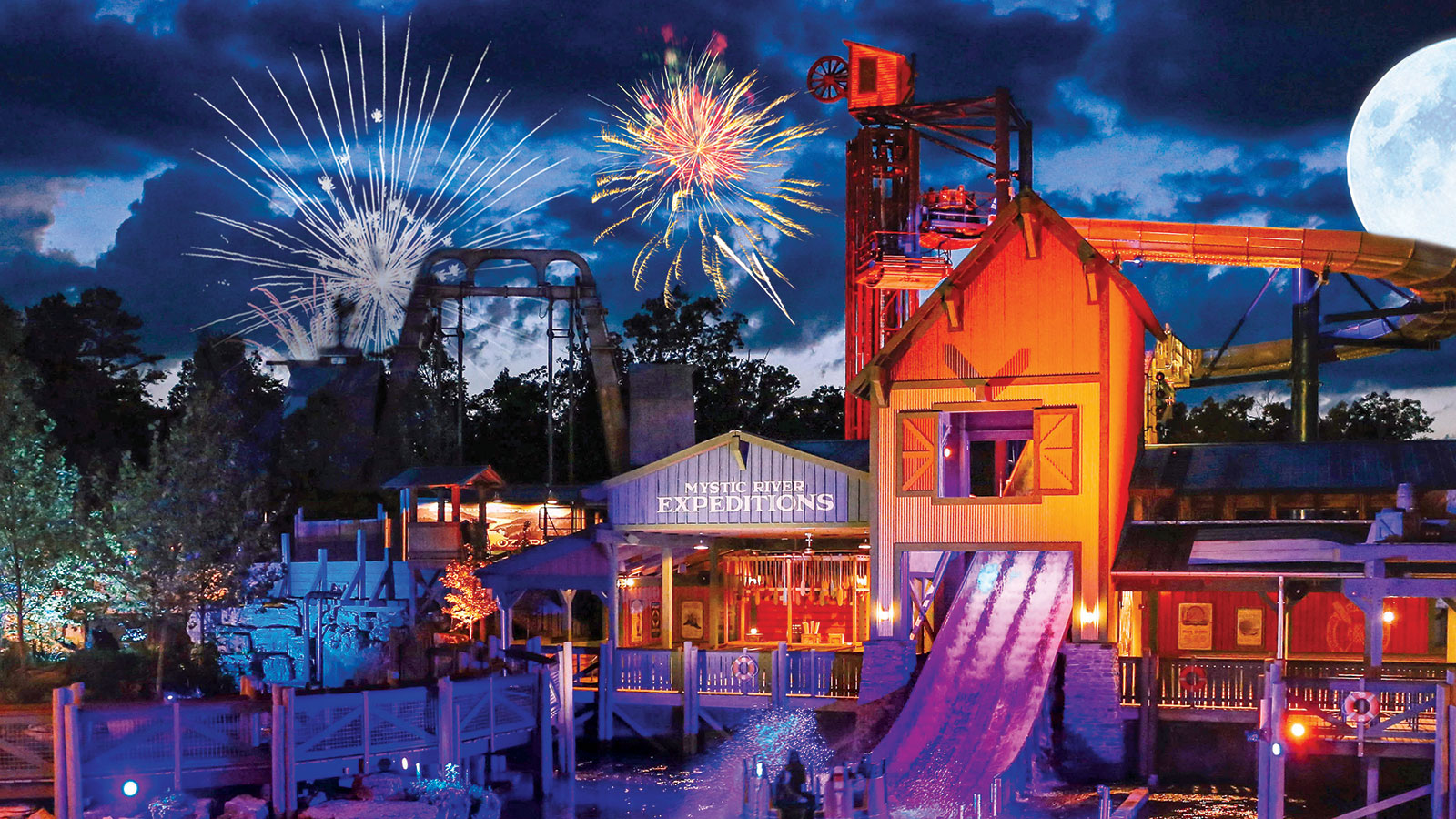 A few miles west of Branson nestled in the Ozark Mountains and atop one of Missouri’s deepest caves is a “city” unlike any other. . .

Over the 61 acres that make up the “city,” you can find 100 resident craftsmen and women skilled in disciplines such as glassblowing and blacksmithing; over 40 rides and attractions; 60 unique shops and restaurants; and 40 brilliant shows. That’s because this is more than just a city. Silver Dollar City is an internationally renowned 1880s-style theme park that regularly transports millions of visitors back to a special part of America’s colorful past.

Like the saying goes about Rome, this city was not built overnight. The story begins in the 1880s in a Missouri mining town called Marmaros. Below the mountain the town sat atop was the mysterious “Marble Cave” that miners explored in search of silver and marble. Unfortunately, all they ended up finding was limestone and bat guano; but the cave quickly showed it had more to offer. Marble Cave was rebranded as “Marvel Cave” and became a tourist destination. Visitors wearing leather-seated breeches would back down a 60-foot wooden ladder and slide down a massive pile of debris in order to enter the cave.

In 1893, a Canadian family known as the Lynches began their some 50 year ownership of the cave. It proved to be such a popular attraction that the family built the road that is now Highway 76. In the spring of 1950, the now-elderly Lynch sisters chose to lease the cave to their friends, the Herschends.

Mary and Hugo Herschend met and married in Chicago, where Hugo worked in the vacuum cleaner industry. The outdoorsy couple enjoyed vacationing in the Ozarks with their two boys, Jack and Pete, before ever purchasing the cave. Once the Herschends had ownership, Mary, Jack, and Pete would run tours while Hugo returned to Chicago to make money for cave improvements. Eventually, tourism picked up and the entire family relocated to the Ozarks.

Hugo suffered a fatal heart attack in 1955, but the rest of the family persevered and worked to keep his vision alive. In the late 1950s, the Herschends created an Ozark village of the 1800s featuring two frontier-style log cabins and a homestead. They scoured the Ozark hills and hollers for local mountain people who crafted their own products such as knives, instruments, and more so guests could get a first-hand glimpse of this way of life that pays homage to American traditions.

Press agent Don Richardson proposed the name “Silver Dollar City,” based around the idea that they could use silver dollar coins from the U.S. Mint for both change and word-of-mouth advertising. Visitors would return home with their silver dollars telling stories of the special place in the hills they got it from. This story is a favorite of Lisa Rau, the director of public relations at Silver Dollar City Attractions & Herschend Family Entertainment. She reflects, with gratitude and fondness, how this “gimmick with integrity” not only worked at the time, but has served to create the theme park Silver Dollar City is today.  “Two people have had this job; the man who named Silver Dollar City, and me. As you can imagine, I had big shoes to fill.” And fill them she has. In her 30-plus years in the position, Lisa and her team have worked tirelessly to preserve the history of Silver Dollar City and its location. This is crucial as the theme park is rooted in culture. “You can’t duplicate a culture like Silver Dollar City — and people have tried,” Rau says.

The theme park first opened on May 1, 1960. According to the Branson Beacon, “eighteen thousand persons from twenty-two states visited the reconstructed historic village of the eighteen hundreds”. Upon its opening, cars wound along the highway for more than a mile. At the time, the theme park featured the General Store; the Wilderness Church (a log building originally built in 1849 and relocated to Silver Dollar City); an Old Miner’s Shack; the Stage Coach Inn; a print shop which published daily town papers; and performers and craftsmen and women.

In October 1963 Silver Dollar City held its first three-day festival, featuring native craftsmen demonstrating their work and a fall harvest theme. The success of the event proved that craftsmanship was a crowd-pleasing attraction. In fact, the craftsmanship demonstrated at the theme park is so impressive and unique that on Silver Dollar City’s 50th Anniversary in 2010, a Congressional proclamation officially recognized the park as, “The Home of American Craftsmanship”.

That first festival grew into what is now the month long National Harvest Festival featuring Crafts & Pumpkins in The City, acclaimed as “the granddaddy of all crafts festivals in America’s heartland.” There are now numerous festivals and events at Silver Dollar City from March through December, each with their own special themes and features. One of the most popular is the Christmas Festival, “An Old Time Christmas”. From its start in 1988 to now, this festival has featured spectacular area-wide lighting and shows. Today, it includes over 6.5 million twinkling lights, an eight-story special effects tree, a Christmas light parade, special holiday foods, and spectacular live shows.

In the early 1960s, the Herschend family added two authentic stagecoaches and a steam train to the park’s attractions. The horse-drawn coaches gave guests rides over backwoods trails from 1962 until their retirement in the 1970s, but the steam train would remain a park staple. In 1969, the family replaced the first train for more powerful locomotives to accommodate demand and the terrain, two of which are still in service!

In the 62 years since the park first opened, Silver Dollar City has grown exponentially while dealing with many changes. But through it all, the park has remained steadfast in its goal of bringing history to life while preserving the natural setting. Mary Herschend mandated that they keep all the trees possible, which is why you’ll find all the attractions are built among the trees and hills and while incorporating real Ozark history. The city’s first roller coaster, Fire in The Hole, opened in 1972 and is a perfect example of the park’s commitment to natural preservation. Rooted in local legend, the ride tells the story of the Baldknobbers, vigilantes who burned down the town. One of the most popular rides is Outlaw Run, which features the world’s first and only double barrel roll on a wood coaster and a record-breaking three inversions. It was voted Best New Ride of 2013 worldwide by Amusement Today and was included in the Guinness Book of World Records in 2015 for Steepest Wooden Roller Coaster for its 81-degree drop.

In recent years the park continues to grow with record-breaking additions like, Time Traveler, the world’s fastest, steepest, tallest spinning coaster, themed to a clockworks factory of the 1880s; and the latest, Mystic River Falls, themed to an actual river found in Marvel Cave, where explorers were unable to find the headwaters. In today’s ride, through raging rapids, the rider explores an Ozark river until the final headwaters – plunging four stories down a waterfall.

Walking through the park can build up quite the appetite, which will only grow stronger once you enter the Square at Silver Dollar City and catch a whiff of fresh baked bread. With roughly 25 dining options, the park offers many hearty, made-from-scratch dishes. One of the “city’s” most iconic dishes is the warm cinnamon loaves with vanilla icing from Clara Belle’s Bakery. Guests can visit other bakeries around the park, like Sullivan’s Mill — watch the authentic, water-powered grist mill grind corn into fresh meals while they dig in. For those with a sweet tooth, the city also features fresh made ice cream from Hannah’s Ice Cream Factory, which churns 9,000 gallons per year.

As if all that the theme park offers isn’t enough, guests can experience other Silver Dollar City attractions in Branson such as a cruise, meal, and amazing show over Table Rock Lake on the Showboat Branson Belle; a stay at the Silver Dollar City Campground, which features hand-crafted rustic log cabins and a complimentary shuttle to the park; or a seasonal visit to White Water, the Branson water park that has 13 acres of water rides, slides, and waves.

Since its opening, Silver Dollar City has hosted roughly 85 million guests, investing some $120 million in capital in the last decade alone. Much of the park’s success is due to the city’s one-of-a-kind “citizens”. As Pete Herschend once said, “The heart lies not in what it is, but who it is. The ‘who’ is the reason why Silver Dollar City is successful. The ‘who’ is the people, and therein makes the difference.” Lisa would agree wholeheartedly with this, crediting the ongoing success of the park to the “incredible amount of teamwork that goes into every single thing we do”.

If you’re looking for a vacation the whole family can enjoy while still learning a thing or two, unplug, unwind, and look forward to the past at Silver Dollar City.