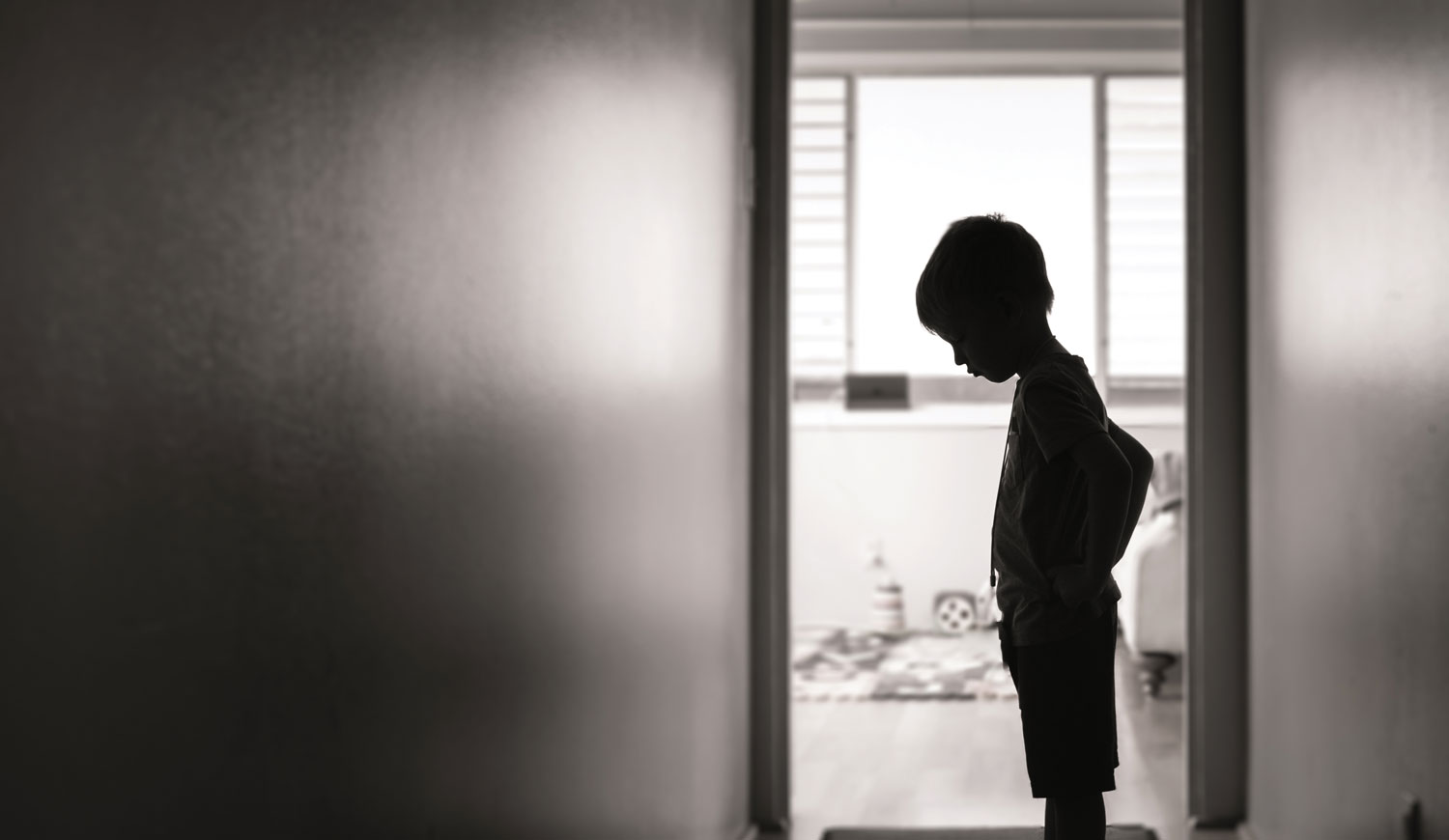 A mother’s struggle to find the mental health care needed for her son.

Today, I sat in my car in the hospital parking lot and sobbed. It was an ugly, sloppy sobbing that was born of frustration, desperation, and hopeless defeat. I had just walked out the ER doors with my 9 year old in tow. It was the third such visit this year, but this time I was left feeling totally abandoned and helpless. A sobbing woman in a hospital parking lot seems like a fitting illustration of the total failure of our mental health system.

My son is a beautiful child with wit and charm to spare. He is sensitive and kind. He is social and intelligent. He is also defiant and impulsive. Challenging and utterly exhausting. Sometimes he is cruel and even frightening. He is all these things because he is a child with complex mental health issues.

Today’s visit was after a total meltdown because his father and I were going to go to a football game and he was not. It quickly devolved into screaming and throwing things. The predictable refusals to do anything asked of him were there, too. While the onslaught of rage is always a bit shocking, it had been building for a while. There had been arguments all week. He had broken my rules and played video games while at a friend’s house — video games always trigger his ADHD and behavioral issues. The whole family had been paying for it all week. The arguments, the lying, the refusal to do what he was asked. It was building, and today was the day. The final straw broke and it all came tumbling down, just as it has before.

Even though he’s only 9, my son has been seeing a psychologist for six years. These challenges aren’t new, but they’ve gotten worse. The pandemic has brought with it more rules and restrictions in our house than ever before, and that’s frustrating. A year of online learning for a kid with an internet addiction will take its toll. This time, just like before, we did as the psychologist said and took him to the ER.

The first time we went, it was because he had gotten mad and trashed the house. Chairs overturned. Pillows and laundry strewn about. After nine hours in the ER, they sent us home and encouraged us to come back if things didn’t get better. The shock of an ER visit bought us a little time. The second visit came after our son told my husband that he was going to get a knife and kill himself. The nice doctor asked him if he really wanted to hurt himself. When he told her no, they sent us home because he didn’t seem to be a threat. They encouraged us to put all our knives away though — just in case.

Somewhere, deep down, I think I was convinced that they’d finally do something with a third visit. That would be the key. They’d take him inpatient and work to make it better with more than platitudes and lists of resources. The same nice doctor came in. She showed my son how to deep breathe when he gets upset (as if we’d never thought of that). I had him show her his technique, the one he uses when he’s able to stop himself from impulsive, angry outbursts in time. Neither her technique nor his is successful in pulling him back once he crosses that line. When I pushed that we couldn’t keep doing this, a prescription followed. This magical pill is to be given when he starts to get upset. I questioned how trying to get him to take a pill would help when he’s already mad and suggested that doing so would just be a trigger. “Give it to him before it gets to that point.” When I asked for thresholds — how to know when to give it — the response was that I know him best, so I’ll just know. I do know him, and I know that it often goes from perfectly fine to nuclear meltdown in a matter of seconds and that telling him to take a pill in those moments is only going to escalate things.

That was it, though.

No more help was coming. I was left to go back and keep trying. When the nice nurse came in with discharge papers, I suppose I was primed. She flipped through the 20 or so pages to tell me that I should follow up with his current psychologist. She paused to confirm he had one. “Yes. He’s been seeing him for six years,” I said as tears welled up. Perhaps they meant that I should follow up with the psychiatrist that he’s been seeing, too, the one that just wants to sign new prescriptions. The one that asks me what I’d like him to prescribe as if I somehow know my choices, or what would work. The nurse continued on, quickly recognizing the ridiculousness of the instructions — “return to the ER if the problem persists.” Well, why the hell wouldn’t it? We haven’t actually done anything to fix it. We wouldn’t discharge a gunshot victim without addressing the wound and tell them to come back if it keeps bleeding!

I was done. Though it wasn’t her fault, the nurse got my emotional baggage when she acknowledged that wasn’t very helpful and unwisely asked if I felt like I’d been helped today. All the tears came when I responded: “No! No, I haven’t been helped. But I wasn’t the last two times, so maybe it takes four visits before someone will help us. See you soon.” The list of resources — the ones that I’d received before — was left behind on the bed. I’d called them all already. They either didn’t provide the types of services I needed, were identical to the services I already have, or had such a long waiting list they weren’t even taking names anymore. Each one referred me to the others, creating a vicious circle.

And so there I sat, in my car, sobbing. The perfect illustration of a broken mental health care system.

The impact of mental health is, of course, far reaching. My son’s outbursts impact far more than just him. Our family walks on eggshells, wondering what the next trigger will be. My daughter’s anxiety is heightened by the constant arguing and threat of escalated meltdowns. She’s quick to take cover as things progress and talks often of a preference to be somewhere other than our home. My husband and I struggle not to approach every encounter with frustration and the expectation that it’s going to be an issue. It’s hard to forgive and give another chance over and over again. It’s difficult to remember that our son is trying and that this is hard for him. It’s nearly impossible not to feel hurt when he looks at you with a mixture of anger and hatred and tells you that he hates you. It’s easy to believe him when he tells you that you’re a horrible mother.

Mental health issues are forced into the shadows as something to be ashamed of and to hide. That’s bad enough. Then, when you try to get help, there’s none to be found. We must do better. We must find ways to provide support for families. The pandemic has taken a terrible toll on the mental health of everyone, and our children are not immune from that. It would be disingenuous of me to suggest that all of my son’s issues arose as a result of the pandemic, but it certainly was a perfect storm that made managing it impossible. Maybe a positive of this pandemic can be a recognition of the need for better mental health support. I don’t know what should be done or what my son needs, but that’s the point. Mental health professionals must provide that guidance — and then the needed resources must be available. I have health insurance and financial means. I can’t imagine what this must look like without those advantages.

I’m disappointed and discouraged — knocked down, but not out. I will keep advocating for my son, seeking, demanding, begging for the resources he needs. It just shouldn’t be this hard. My children have a host of other medical issues, but they’re physical, not mental. Getting whatever I need for those issues is so easy in comparison. It should be the same for mental health. We must bring it out of the shadows and devote the time, energy, and resources to take care of our children’s mental health in the same ways we take care of their physical health.

The fact that I don’t want you to know my child’s identity — that I feel the need to protect him from public disclosures of his mental health challenges — just confirms that we still live in the shadows. I’d like to boldly say it doesn’t matter, but I want to protect my child even more. It’s not fair for me to choose to make him a martyr to the cause. So the stigma continues. The challenges remain unresolved.

There are undoubtedly hundreds of other families in our community struggling in similar ways, although each has their own unique journey. It can feel so lonely and isolating. Every morning starts with the anticipation of new challenges, and every night ends in the exhaustion of all that the day has demanded. We can do better. I so desperately want us to do better. In the meantime, I want those other families out there — the ones hiding in the shadows and putting on a smile even when you feel more like crying — to know that I see you. You are not alone. I don’t know the answers, but I’m there with you, hunkering down in the cool shadows and trying desperately to ride out the storm.