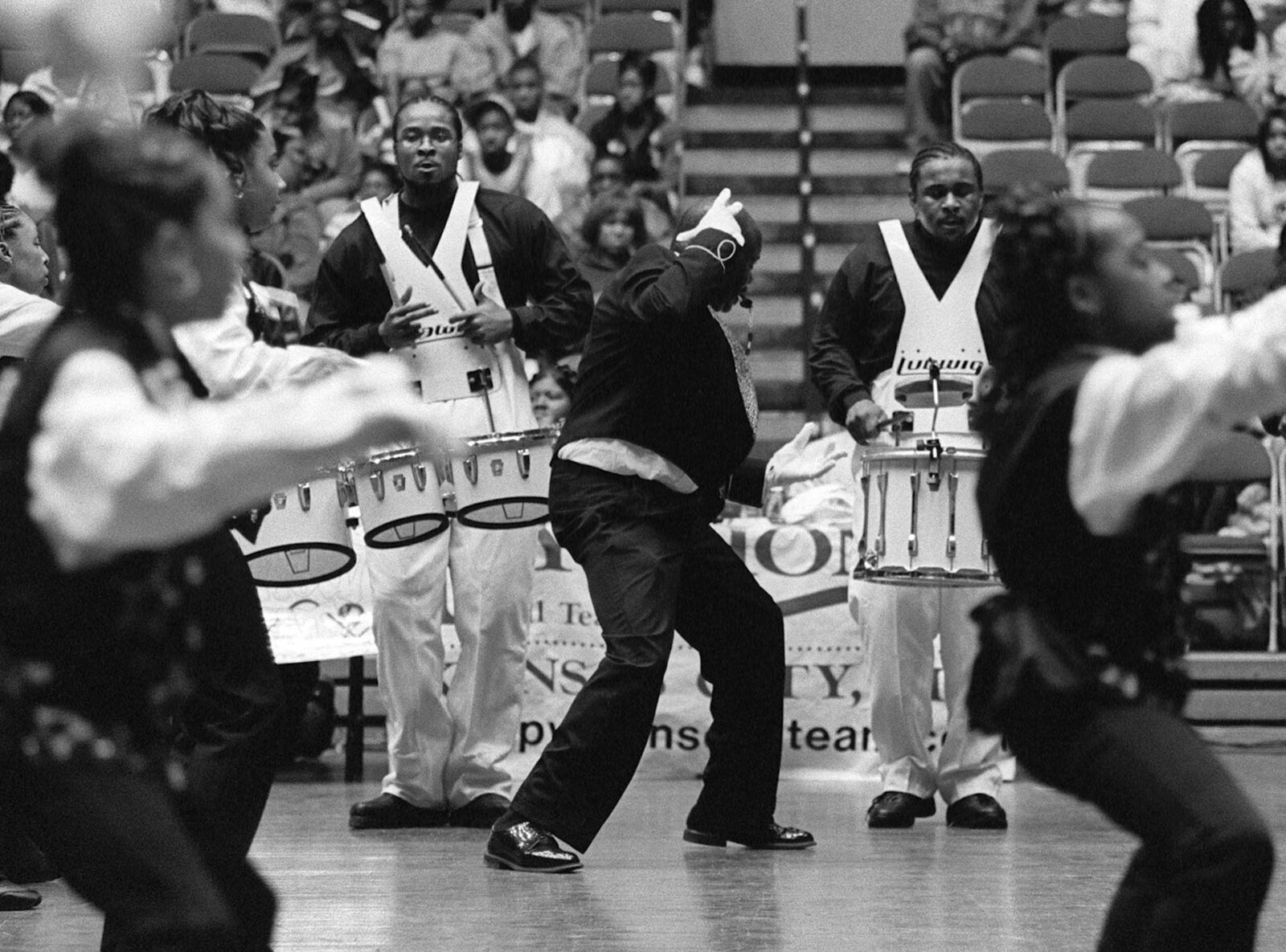 Through determination and discipline, the Missouri High Steppers are shaping future leaders.

Under the tree that sits in front of Hickman High School, Rolando Barry discovered the Missouri High Steppers.

In 1979, Carolyn Woody and Dorcey Lee Turner had 15 to 20 students practicing under this Hickman tree, and they called themselves the Blind Boone Drill Team. Rolando, who was a bus driver at the time, would sit outside the school waiting for the final bell to ring and watch them practice. Having been involved in similar drill team organizations as a child in St. Louis, Rolando was intrigued when he came across this group. After a couple months, he took over the organization, renamed it the Missouri High Steppers, and took it to a new level.

The Missouri High Steppers is a youth performing arts organization that brings people of all ages to get involved in the arts through drumming, dancing, singing, stepping, and more.

“Through arts, there is a discipline,” Rolando says. The organization comes together to create powerful and impactful performances that they showcase throughout the Columbia community, and they travel to other locations as well.

Rolando started by teaching the students basic steps that he had learned as a child. 43 years later, Rolando is still leading the Missouri High Steppers with his right-hand man, Tyrone Raybon, who is better known as “T-Man.” Tyrone has known Rolando since he was 15 years old and now has grandchildren who are involved in the organization.

Rolando gives a lot of credit to his wife, Teresa, who he calls his “solid rock.” Teresa encourages and supports him to follow his dreams every day to create a positive environment for the youth of Columbia. Creating positive role models is important to Rolando, and through a service learning opportunity with MU, college students can volunteer with the organization and act as mentors for the younger members. Alumni of the organization frequently come back to serve as mentors as well. As of now, the organization has about 55 members on their roster who are involved in workshops four evenings a week, and occasionally on the weekends, to polish routines before a performance.

“Through the process of developing these routines that we take out into the community, the kids learn how to be responsible for the decisions they make in their life, stay high-focused, and stay on task.” Rolando says.

There is a creed that each member of the organization must memorize and follow. Rolando says the creed shows that this organization isn’t kids just doing silly dance moves that have no purpose; they are “intricate dances that are backed by a sound philosophy in terms of how to govern your life and apply it to all stages of your life.”

In November of 2021, their organization took a huge step when they were gifted a building from local businessman Greg DeLine. This allowed the organization to have a place to call home and build connections with each other. In years past, the organization has had to go on hiatuses because they simply had no place to practice, so having this building has let the High Steppers grow permanent roots in the community.

About 95% of the members in the Missouri High Steppers are Black youth. Rolando says it is “a good feeling to see these youth members who are often portrayed negatively, but when you hear the drums, you hear a sound in the community that is peaceful, because behind those sounds, there is hard work being done.” Each member works diligently and creatively to follow the creed and expectations placed on them to be a part of this organization and create performances for the community.

Students of any age can be a part of the organization, they are just required to pay a $25 monthly fee. Rolando says this monthly fee helps create motivation and the drive to show up every day and work hard. The organization also recognizes that not everybody can afford the monthly fee, so they offer scholarships to give students a chance to become a member. Rolando says that his favorite part of being involved in this organization is being at practice every night and seeing the growth that happens with the youth members. He sees young kids become involved in a place that is accepting and offers opportunities to allow them to get involved in the community.

A Way to Give Back

The organization has plans for expansion and growth in the future. Having a permanent building has opened up many opportunities for the organization, but Rolando says it doesn’t stop there. He has a goal to travel to every state to showcase the Missouri High Steppers and become involved in drill team competitions across the country.

You can catch their performances this month at the Mizzou women’s basketball halftime show on February 3 and men’s basketball halftime show on February 22. Their website offers a calendar of events, more information on the organization, and a place to make donations to help them reach their goals in the future. Through generous donations from the community, the organization is able to purchase necessary equipment, buy uniforms, offer scholarships, and cover some travel expenses.