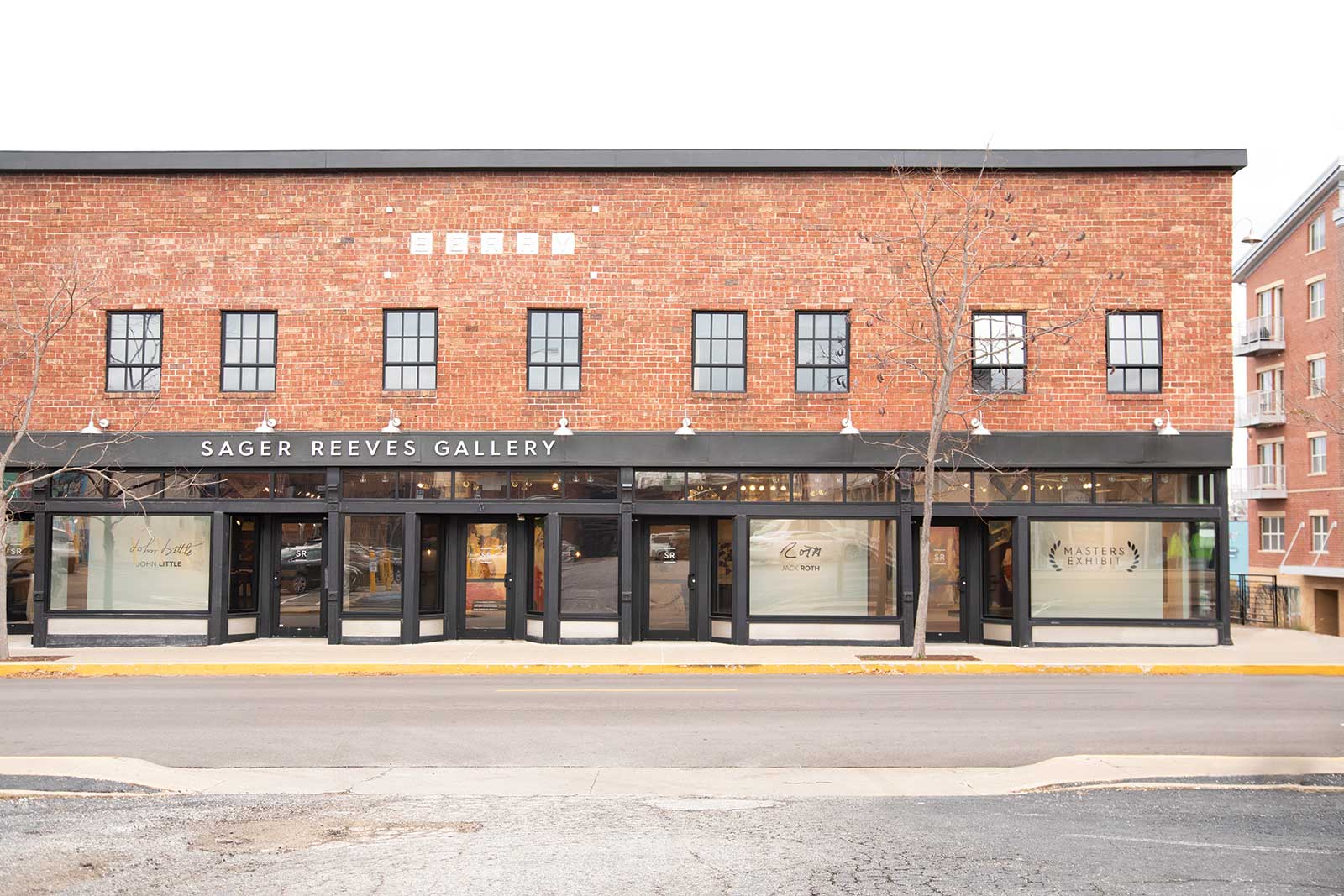 Exploring contemporary and post-war pieces from around the globe with Joel Sager.

The Sager Reeves Art Gallery is nestled at the heart of the North Village Arts District in Columbia. The gallery hosts the work of over 100 artists from all over the globe. With both contemporary and mid-century pieces, the exhibits showcased throughout the year bring in artists and admirers alike.

When Joel Sager, artist and co-owner of the gallery, was at the start of his career, his own art was showcased at the Sager Reeves gallery location (formerly known as P.S. Gallery and then Sager Braudis Gallery). When the owners of P.S. moved out of state, Sager was presented with the opportunity to take over. He explained that being a gallerist wasn’t the career path he had envisioned for himself, and he was admittedly hesitant. “At the time, it seemed like something I’d do and then transition out of . . . but now, my dual identity is as an artist and a gallerist. I can’t imagine not owning the gallery.”

Soon after taking ownership of the gallery, Sager was featured in the 2014 class of 20 under 40. At the time of Sager’s original feature, the gallery had contracts with about 30 artists. Since then, the gallery has reached new heights and now has upwards of 100 artists in rotation. This growth wouldn’t have been possible without the help of Sager’s fellow artists, collectors, supporters, and his new co-owner, Hannah Reeves.

Reeves, who was a long-term director at the gallery, recently stepped up to co-owner. As a longtime contributor to the arts community with years of experience in the gallery business, Reeves was the perfect fit. Sager says: “I met Hannah through the visual arts group. She was professional, smart, engaged, and passionate about the artwork. I had a shortlist of people, and she was at the very top, so I was very pleased when she took the job.”

Sager and Reeves’ artistic styles and business approaches complement each other seamlessly. Sager says: “I couldn’t be any more proud or honored to have her by my side. We’ve always had a very ‘left-hand, right-hand’ working relationship.”

The Sager Reeves gallery represents two types of programming: contemporary and post-war. Contemporary art is created by living artists; the post-war pieces highlight an array of sometimes overlooked figures in art history. These artists are from the period after World War II, when the capital of the art world moved from Europe to the U.S., and more specifically to New York City. Because of this paradigm shift, there was a significant influx of creative talent, and the United States is still in the process of uncovering artists from that time.

To contribute to these uncovering efforts, the gallery hosts its annual Masters Exhibit. Originally, the exhibit was intended to showcase only contemporary artists, but the event quickly shifted to include post-war work. This evolution happened in part because Sager had a long-term dream of selling an original Picasso. So, when planning the first Masters Exhibit, he jumped into researching the process behind properly exhibiting such high-caliber work. It’s not an easy feat — transportation is costly and requires precision and extreme care. However, Sager successfully exhibited and sold a Picasso at the first Masters Exhibit, and this December, the gallery proudly hosted its eighth annual event.

In the future, Sager hopes to make the gallery collection more robust with the addition of artists in both the contemporary and post-war categories. To do this, the gallerists will work with the secondary market of both dealers and the estates of artists and collectors to continue bringing in compelling work from deceased artists. Sager enjoys getting to know these individuals through the work they’ve collected over the years and have chosen to bring into their own houses and collections. He said, “There’s an art form to curating . . . there’s absolutely a talent that’s involved with collecting and buying and acquiring works, and so to be invited into people’s homes and to go through their portfolio of paintings is really special and intriguing.”

While the collection is ever evolving, the gallery is not currently taking submissions. This allows Sager and his colleagues to properly focus on the artists they currently support. Sager considers this a positive because it means the gallery is in good standing with an abundance of talented artists in rotation. But there’s good news for artists wanting to be featured in the future — the gallerists reassess annually whether or not they’ll be accepting submissions.

For others looking to get involved in the art community, the Sager Reeves Gallery is usually open to the public Tuesday through Saturday. During the first week of the month, however, the gallery offers member previews by appointment Tuesday through Friday and is open to the public from 6 to 9 p.m. on First Fridays, when the North Village Arts District invites the community, including visitors and tourists, to collectively experience art and entertainment. Columbia has hosted quarterly gallery walks for years, but the board for the North Village Arts District created First Fridays as a way to increase the frequency of these events.

The arts are thriving in Columbia, and there are even more exciting things on the horizon. In November, Veterans United donated $10 million in grant money to almost 100 local nonprofits, including the North Village Arts District. The grant of $231,530 will enable local and regional artists to contribute 10 to 12 local art installations, including sculptures, murals, and outdoor areas for the community to enjoy.

Sager’s impact on the arts scene in Columbia is clear, and he’s excited for what the future holds for both the Sager Reeves gallery and, more broadly, the local arts community. “Columbia has something really interesting and special,” he says. “I think if people aren’t aware of Columbia’s arts district, they should come down and visit. If they are aware, I think they feel very privileged to live in this city.