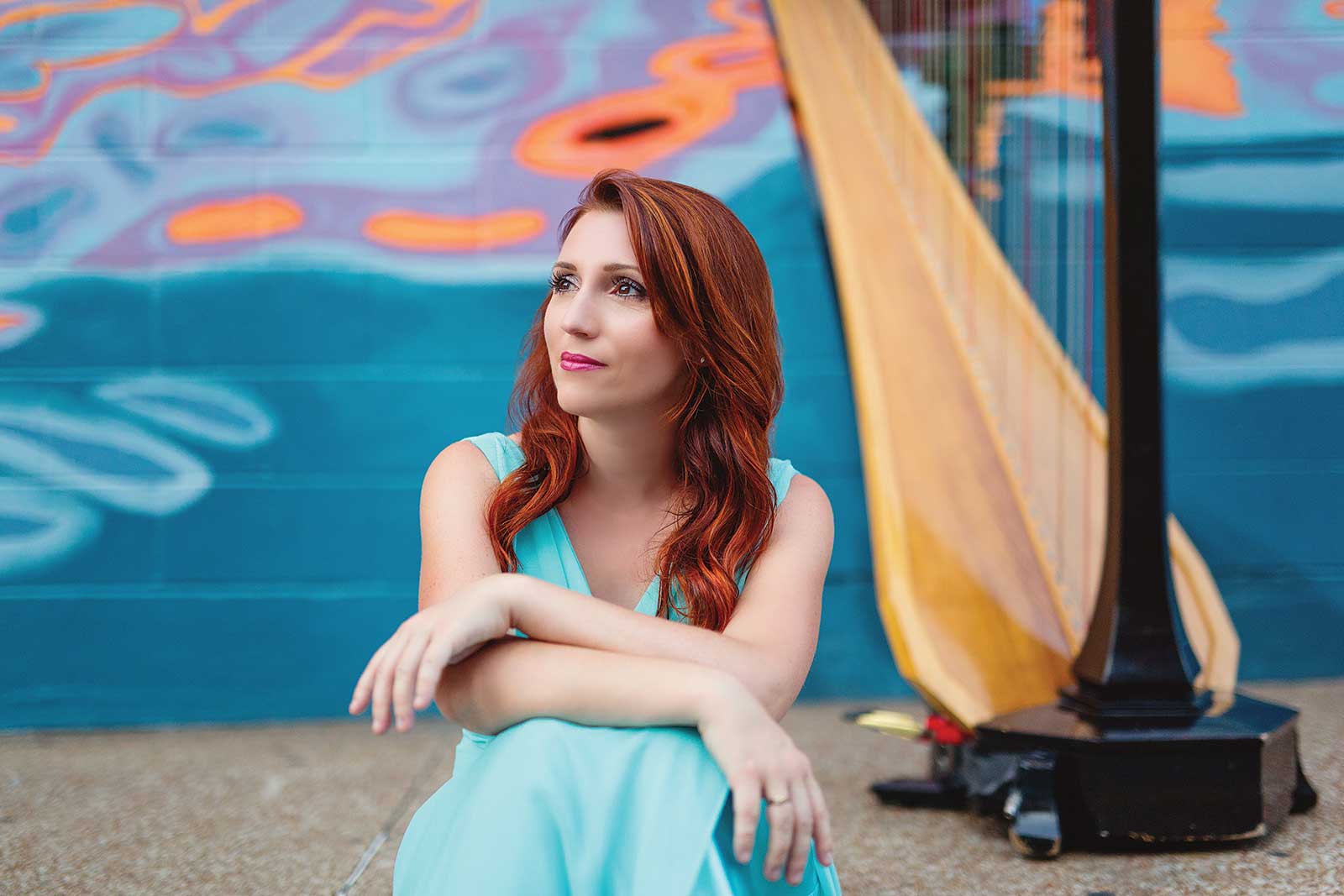 Maria Trevor shares her love of the fairy tale instrument.

How Maria Trevor brought her love of the harp to Columbia, Missouri, is a love story.

As a child growing up in Slovakia, Maria played the piano, but she was fascinated by the harp from an early age. “It seemed to be such a fairy tale instrument,” Maria recalls. She began taking harp lessons at age 12, fell in love with the instrument, and by age 14, she was studying harp at the Conservatory of Music in Zilina, a city in northwestern Slovakia.

While serving as the principal harpist at the Bohuslav Martinu Philharmonic Orchestra, in the Czech Republic, Maria met Kirk Trevor, then the conductor. “We fell in love and married a few years later,” Maria says. “We had a commuting marriage for four years, and when I was expecting our first child, we decided to move to one place to raise a family. I still miss my family and friends overseas, but we visit every summer.”

That’s what brought Maria to Columbia, where Kirk has served as the conductor of the Missouri Symphony since 2000. (He recently announced he will step down on July 31.) For Maria, being a part of Columbia’s musical community has given her the opportunity to continue sharing her love of the harp.

Being centrally located in Columbia affords Maria the chance to travel across the state to perform in places like Springfield, Kansas City, and St. Louis. Here in town, she is the principal harpist for the Missouri Symphony, performs with the Odyssey Series, and collaborates with MU’s ensembles when a harpist is needed. “In my career as an orchestra harpist, I have been fortunate to share the stage with artists such as Johnny Mathis, Art Garfunkel, Ben Vereen, Ben E. King, Eileen Ivers, and the Texas Tenors,” Maria says.

In addition to orchestra music, Maria brings the magic of the harp to special events and wedding ceremonies. She estimates she’s played at more than 200 wedding ceremonies. “Brides often describe to me how hearing their music being played for the first time suddenly made all these distant wedding plans feel so real,” she says. “Live music has a certain kind of magic to it and can create an unforgettable ambiance, especially during these once-in-a-lifetime occasions.”

Teaching the harp to students of all ages is also important to Maria. “I love teaching my students. It’s as simple as that,” she says. “Harp chooses people rather than the other way around. What usually happens is that students — adults or children — come to me saying, ‘I’ve always wanted to play harp.’”

Maria started working on an initiative called “Harp and Healing” after the unexpected loss of her mother in 2011. “Naturally, turning to my instrument — playing slow and soothing music — helped me through my grief, so I explored therapeutic music and the effects of it on the healing process,” she says.

The service started at Broadway Christian Church as a monthly way to share healing music for those who needed it in an environment that would be conducive to physical and emotional renewal. Since the pandemic started, the services are virtual and can be found on the church’s YouTube channel.

Like many artists, Maria has had to shift the way she performs due to the COVID-19 pandemic. “The silence and the lack of creative outlets have been very hard on artists, not only emotionally and mentally speaking, but also financially,” she says. There can be a silver living, though. Maria says she has enjoyed virtual concerts and surprise performances on birthday Zoom parties.

For anyone who is considering taking up the harp or any a new instrument, Maria says not to be afraid or intimidated. “Everything can be learned at any age,” she says. “So if you ever dreamed of playing a harp, borrow one of my smaller harps and give it a try!”