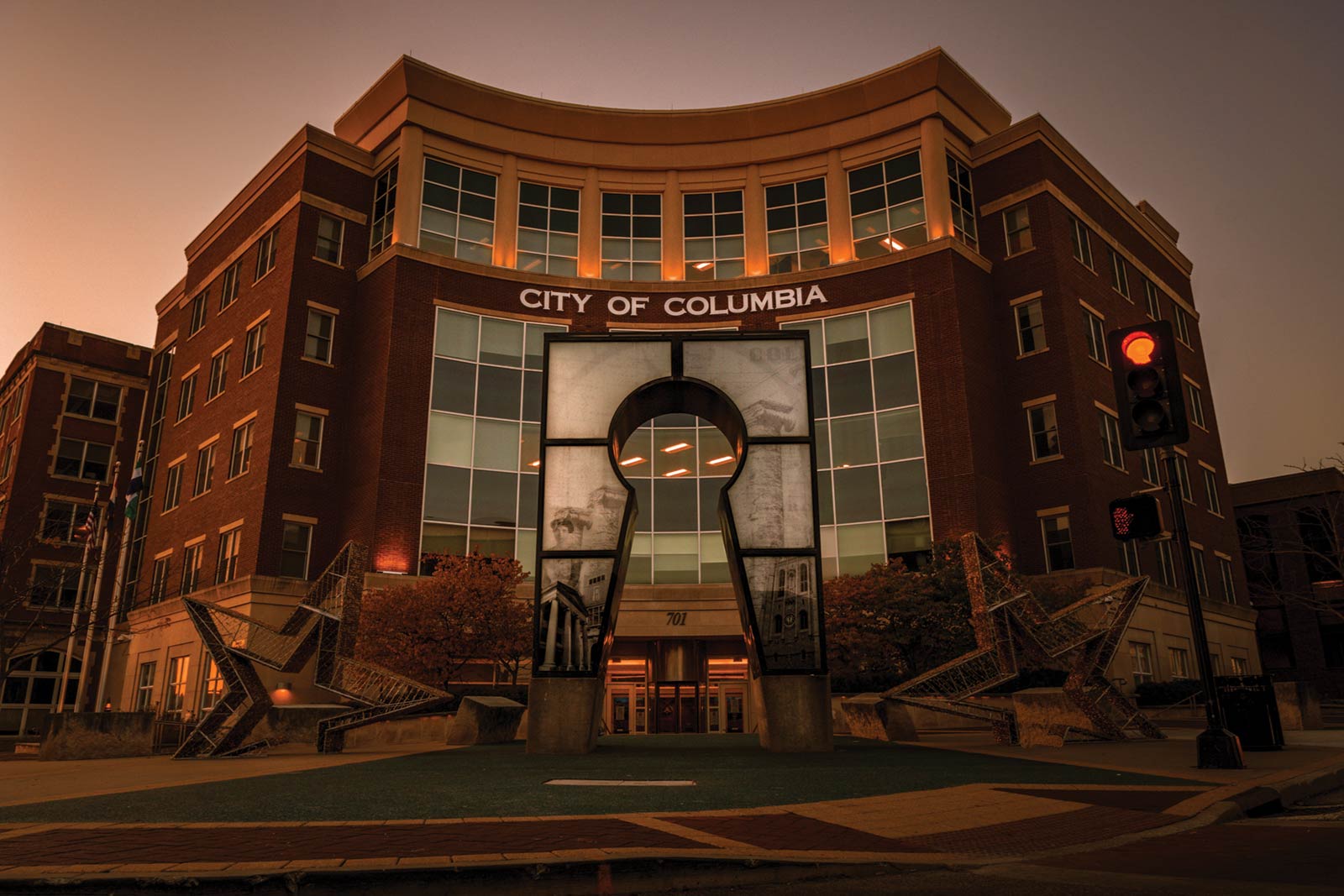 The city’s Percent for Art program makes art accessible for all.

You’ve seen the iconic keyhole sculpture in front of City Hall in Columbia. It’s there in the background on newscasts, photographed for advertisements, lit up to celebrate different occasions, captured as the backdrop for selfies, and used as a symbol for the city. What you may not realize is that the keyhole sculpture is part of the Percent for Art program, run by the City of Columbia, designed to bring public art to construction projects.

The keyhole, a sculpture by artist Howard Meehan officially known as “Keys to the City,” is the largest Percent for Art project undertaken by the city to date. Completed in 2010, the sculpture commemorates Columbia’s history, with photographs of local landmarks and historical figures, like Mary Paxton Keeley and “Blind” Boone.

“It’s a much-loved, often-photographed symbol of Columbia,” says Marie Hunter, who served as the manager of the city’s Office of Cultural Affairs when the project was commissioned. “I’m constantly texting Howard pictures of the sculpture and how people are using it. He intended it to become exactly what it is. If someone says, ‘Meet me at the keyhole,’ you know where and what it means.”

“Keys to the City” is a monument that brought public art directly to the community, a key success of the Percent for Art program, which aims to make art accessible and available to all.

A History of Leading in the Arts

In May 1997, the Columbia City Council approved legislation to create the Percent for Art program. The program allows for 1% of the cost of any new city construction or renovation projects to be used for site-specific public art. Any above-ground capital improvement project with a budget of $1 million or more is eligible to have public art as a component of the completed site. The program is managed and administered through the Columbia Office of Cultural Affairs, assisted by a standing committee on public art appointed by the city council.

The program came after a push by the city’s leadership, which had a strong interest in arts and a recognition of its economic impact. At that time, City Manager Ray Beck and Mayor Darwin Hindman, along with council members, attended a session on public art at a national conference in Phoenix. Mayor Hindman was particularly interested and enthusiastic, Marie recalls.

“Columbia is progressive in its arts programming and support within municipal government for two main reasons: the Percent for Art program and the Office of Cultural Affairs,” says Marie. “At the time that Percent for Art was established in Columbia, there was only one other community that had a program, in Kansas City.”

For a community Columbia’s size, it’s particularly impressive to have such a vibrant arts program with a public art component. The City Council also opened the Percent for Art program to both local and national artists with the recognition that artists far and wide should be able to participate and be selected for their work in other communities.

The first two public art projects commissioned by Percent for Art were both completed in 1999. The parking garage at Eighth and Cherry Streets showcases a neon, ceramic tile mural of wheels called “Rolling Ahead” by Ron Fondaw. At the Oakland Family Aquatic Center, families coming to swim may not even realize they’re looking at public art by Mark La Mair, a Springfield artist who created the playful sculptures, called “Leap In To,” gracing the outside of the swim center.

Susan Taylor Glasgow was the first local artist and the first woman to receive a Percent for Art commission. Her sculpture “Network” now lives at Fire Station No. 8 at Nifong Boulevard and Bearfield Road. “Network” is a series of colored and sandblasted glass blocks, some including traditional symbols of firefighting, all visible from the exterior. “It was an honor to be the first local artist and to share with the community,” Susan says. “My career has changed since then, but back then, I was an emerging artist, and it was a pivotal point.”

Susan’s project also included an educational component after Marie set up an artist residency at New Haven Elementary School. Susan spent a week working with students, who then toured the fire station. “Those children are all grown up now, and every once in a while, I come across one who still remembers how fun the project was,” Susan recalls.

Public art makes such an impact on our community and our environment, Susan says. It’s certainly one of the reasons why Columbia was honored as Missouri’s first Creative Community by the Missouri Arts Council in 2007, in recognition that Columbia’s arts industry has a proven economic impact. “That was a big one,” Marie says. “The nomination hinged on economic impact and arts-based tourism, and Percent for Art was definitely a component because it’s unique about Columbia.”

Art Available to All

Public art from the Percent for Art program is now all across the city and allows us to experience and enjoy art in everyday life. Going to swim or exercise at the Activity and Recreation Center? As you enter the main lobby, it’s hard to miss the scale of the large sculpture suspended in the atrium. “Taking the Plunge” is a 12-foot-tall, 15-foot-wide figure created by Norman Courtney as part of Percent for Art in 2002. Head downtown to Wabash Station to check out two pieces of Percent for Art works, from David Spear’s four-painting series featuring local Columbians in the interior to Don Asbee’s forged steel train on the exterior.

“The city has made such a commitment to beautification and making these opportunities for culture accessible,” says Elise Buchheit, program specialist for the Office of Cultural Affairs. “We see a huge value in it. As we develop different areas of town, having artistic representations there helps us retain the culture that’s so unique to Columbia.”

More recently, the city’s new field house at Perry Philips Park carries the latest Percent for Art project, with three different sculptures by David Spear. The largest of the three pieces, “Boundaries,” was created to work in harmony with the mission of the field house and to inspire visiting athletes, David says. The large-scale sculptures are a mix of materials, LED lighting, and digital transparencies. “This was an opportunity to get outside of painting and use these newer materials,” David says.

Next up will be two different Percent for Art projects at the new Columbia Regional Airport terminal, where travelers will pass by the artwork daily. The airport project will feature local artist Chris Morrey and a nonlocal artist, David Griggs, from Colorado. The artists are working on proposals now, with public comments expected to start by the beginning of next year.

In addition to the Percent for Art program, the cultural affairs office works on traffic box art, which is hard to miss as you drive around downtown Columbia. The traffic box art program began in 2007 as a way to deter graffiti and beautify street corners. Currently, 16 traffic boxes around town feature work by local artists. The latest traffic box will be at Ash and Eighth streets by the Boone County Government Building, with artist Roy Fox depicting workers building the city’s armory as part of the Works Progress Administration.

This year, during a pandemic, we can’t attend large, live performances or experience art in the same ways. That’s why the Office of Cultural Affairs plans to focus heavily on helping people give to Columbia’s arts organizations, Elise says. She encourages community members to find an arts organization they connect with and to support them. For art enthusiasts, Elise reminds us that “participating in art lowers stress levels, increases civic engagement, and fosters civic pride in the community.”

It’s easy to experience Columbia’s public art, much of which is outside and can be viewed from a car or a walking tour. You can also download the city’s app or online guide and take a public art tour of all that the city’s Percent for Art program offers. In a time when we need art in the everyday experience, the opportunity is there to appreciate the unique art around our community and find the hidden gems among our public spaces. You might even start by meeting at the keyhole.