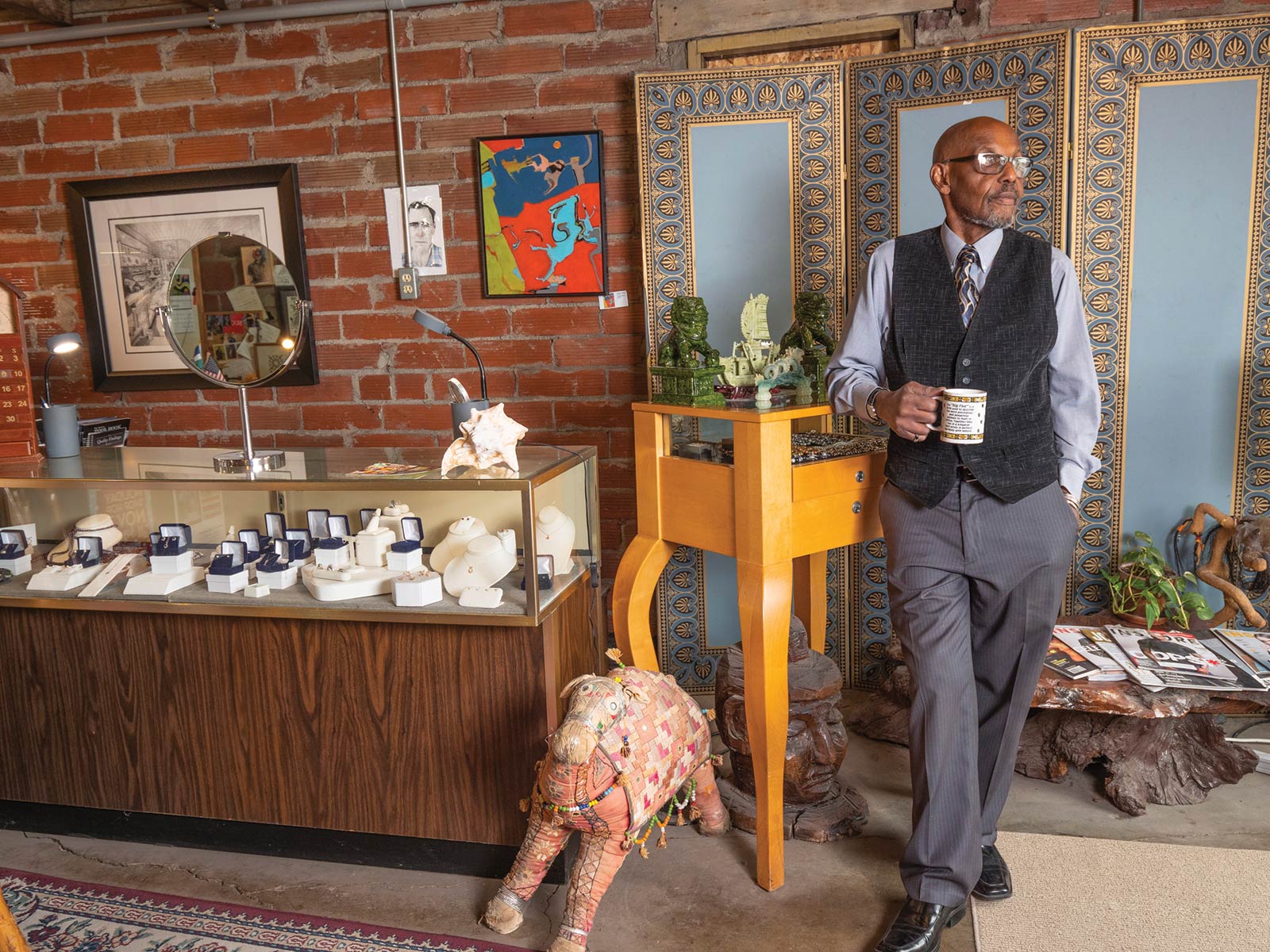 ’Tis the Season for Spice

The North Village Arts District supports a community of artists, musicians, and other businesses in downtown Columbia.

Think “North Village Arts District” and visions of galleries, artists, and musicians come to mind. But this community, bounded by Rogers Street, the Walnut Street alley, College Avenue, and Eighth Street, is so much more.

“It’s such an interesting and eclectic place,” says Tootie Burns, artist and president of the North Village Arts District Board of Directors. “There are law offices, an aquarium shop, yoga studios, the music component — it’s a great area.”

Founded in 2009, the NVAD set out to create a space where everyone could access cultural activities. Members benefit from the promotion of the area and traffic created by NVAD events. It’s truly all about location.

Do Your Own Thing

Founded in 2015, First Fridays routinely brings hundreds of people into the NVAD on the first Friday of every month.

“There were art happenings at the community level two or four times a year,” says Tootie. “We decided that we were secure enough and would have enough participation that we could put on a monthly event. Ultimately, it came from recognizing the support of arts in the community,” she says.

If you head to the NVAD on a First Friday evening, you’ll hear live music, wander through art galleries and studios, enjoy drinks and dinner, and absorb the vibrant atmosphere of this creative area. Although it’s a district-wide event, the members who participate all do their own thing. And when you’re working with a community of creative people, that freedom is what makes the event so engaging.

The pandemic has put a damper on First Fridays, which Tootie says “were going gangbusters” until the COVID-19 outbreak. But she’s hopeful they will return when it’s safe for crowds to gather again. Until then, NVAD has to get, well, creative.

“We hosted a drive-by music festival for the June First Friday and had limited success,” Tootie says, “and a treasure hunt in October where we scattered small, handmade works of art for kids to find a treasure or two and take home an original piece of art with them.”

“We’re still trying to find ways to get people to the area, promote our businesses, and interact with the community,” Tootie says.

It’s All About Community

Shannon Webster lives in an apartment in NVAD with his wife and operates a studio and gallery space in the Wabash alley. A former member of the NVAD Board, Shannon moved here two years ago. As an artist, he knew this was the place to be.

“Part of moving downtown was being part of a community of like-minded peers I can talk to about art,” Shannon says. “I now have close friends here who are other artists.”

Shannon first planned to rent space in Orr Street Studios, but it was full. Instead, he found a standalone space next door to Kenny Green and Monarch Jewelry. (Affectionately referred to as “Mayor of the North Village Arts District,” Kenny has been creating handmade jewelry there for 36 years.)

The pandemic has wreaked havoc on businesses in NVAD just like everywhere else. But as a community, they’ve tried to pull together, check on each other, and help others when they can. Shannon, who’s a painter as well as a graphic designer and commercial website builder, has created signage for new stores in the NVAD to help make them more discoverable.

“In this community, we’re trying to help each other out,” Shannon says.

Art in the Time of Coronavirus

Tootie says she knows artists, in particular, are struggling. Some are creating a prolific amount of art right now, and others are finding new things to do.

“Several of the artists here are retired and are more focused on making art versus being concerned with selling it,” Shannon says. “Other artists have rents to pay and rely on selling their art to pay them. People are adapting in different ways.”

Many have ramped up their online presence since the pandemic began. Sager Braudis Gallery, for example, put its entire collection online, as well as the monthly exhibits it used to unveil on First Fridays. Rose Music Hall hosts outdoor concerts. And then there’s Mayor Kenny, who’s busy despite Monarch Jewelry’s absence from the internet and social media.

Shannon says people continue to buy art from studios, galleries, and collectives like Artlandish, Artworx, and Orr Street Studios. He says customers want to help in whatever way they can — the larger village helping the smaller one.

People are still coming into businesses in the NVAD. Masks are worn. Tables are spread out. Appointments are required at some to control crowds. And when the world is free to move about again, there will be plenty to experience in this little village.

In the wake of George Floyd’s killing, someone spray painted Black Lives Matter graffiti on the side of Orr Street Studios. As Mallory Donohue, Orr Street Studios director, was trying to figure out what to do with it, another person altered the graffiti to say “All Lives Matter,” a phrase that has come to be seen as a critical retort to the BLM movement for social justice. Mallory says they decided to restore the original graffiti until Orr Street could figure out what to do with it.

The BLM movement and ongoing racial justice protests made Orr Street Studios look at what they were doing to promote racial diversity. The answer was “nothing.” So, the studio launched its Black artist in residence program, offering rent-free studio space and other resources to three young Black artists who otherwise would be unable to afford access.

In less than three months, a volunteer committee had requested, received, and reviewed 15 applications and opened three of its amazing works-of-art doors to the inaugural class of Black artists in residence.

Askia Bilal is a landscape and abstract artist who creates plein air and studio paintings using acrylic and dry media. Jaye is a digital artist who uses video, computers, animation, photography, and graphic art to create video installations. And Candice Malveaux is a painter who uses acrylics on stretched canvas to depict her faith in God, life journeys, and self-discovery.