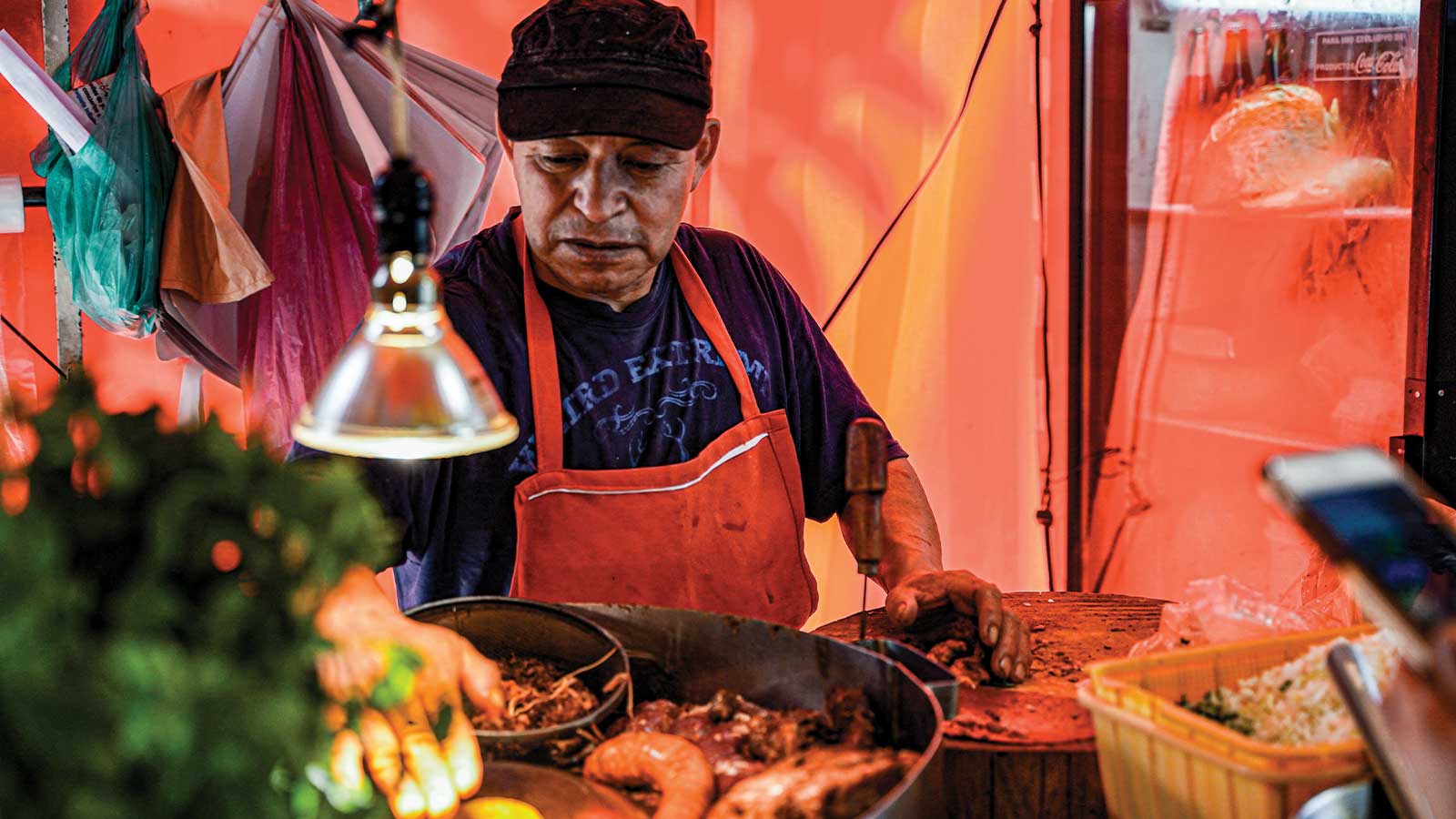 A long, gluttonous weekend in Mexico City reveals the area’s history and changing culture through food.

Long-distance relationships are tricky. Even with our infinite options for digital connection, the feeling of being physically present with those we hold close is unmatched. So, how do you stay connected with friends who live 400 miles away?

For years, Jasmine, a close friend from college, and I have met in a city over a long weekend to make up for lost time. This year’s destination was Mexico City, or CDMX, a cosmopolitan hub that has held its top spot on my must-travel list for its eclecticism and culinary footprint.

Sitting in a bowl between mountains, CDMX is the largest metropolitan area by population in North America, with about 21 million residents. CDMX also has the largest population of Americans outside of the United States. The city is as overwhelming in its physical size, people, food, and culture as its people are overwhelming in their generosity. With only a few days, Jasmine; her fiancé, Blake; and I made the most of our time in CDMX.

Here to Eat and Explore
Flying out of the Columbia Regional Airport early on a Thursday morning, by the time I landed and settled in CDMX, it was raining, and I was hungry. With my travel companions still flying over Texas, I sought my first meal.

A common symptom of high school Spanish is that one often doesn’t retain much. Throughout my trip, I felt embarrassment over my lack of language skills. For a country that has a massive influence on my life and my country every day, it was humbling to admit the little I knew about its electrifying language and history.
Sitting down at Café El Asturiano, the hurdle of not speaking Spanish came to a point. Funny choice to visit the largest Spanish speaking city in the world without having mastered the most basic Spanish fundamentals, right?

As the only non-CDMX resident in the café, my language dilemma was obvious. When the café’s owner came over to assist me, my search for a snack turned into a multi-course meal and lecture on traditional food found in Mexico City.

My menu included fresh agave fruit juice, a light and brothy chicken soup, caramelized plantains served over rice, a brazen portion of chicharron (fried pork belly), followed by a smooth coffee and a sweet. The texture of the pork belly was gelatinous and chewy. I ate all of it.

One of the best parts of traveling to a new place is experiencing its food. As our universal commonality, food is an outstretched hand to introduce people to new cultures. When we eat, we use all five of our senses, and by tasting a place, you get to know a place’s history, culture, and people.

Al Pastor. Bring It Once. Bring It Thrice.
Tacos are the entry point for a lot of Mexican food. If you’re in CDMX and not eating the street food, you’re missing out. It doesn’t matter where in the city or the time of day, street stalls are there to subdue the mere idea of hunger.

There is a stall on every block serving something delicious, such as tortas, fresh fruit, or a snack crate. My favorite snack was caramel-covered nuts dusted with white sesame seeds. I may have pulled a squirrel and brought home an emergency supply for the winter.

Since tacos take up 40% of my food pyramid at home, I focused on taco street stalls, which seemed to share a similar formula. Submerged in a cauldron of bubbling fat, each piece of meat is essentially confited until perfection. Here is where timing is essential. Arrive too early to a stall, and the meat will be chewy; however, arrive too late, and it will be overcooked. Around midday the meat will be tender and ready.

Like many cities, CDMX has an endless number of markets, full of snacks, goods, and fresh fruit (even in the autumn and winter). Our first street taco was in the Coyoacan neighborhood outside a bustling market. Sitting on a child-sized plastic stool, we devoured shredded chicken tacos with a cactus salsa, topped with queso fresco, which is a subtle and fresh crumbling white cheese. Salsas and other toppings were scooped out of full-sized buckets.

Often, the middle of the copper pots housed a rounded plate for tortillas to heat up after taking a dip into the fat. In CDMX, I experienced tortillas as not only a vessel for flavor, but also vital to the experience itself. We were able to taste the differences of the tortilla between stalls, some leaning thinner and towards the flavor of the meat itself, others thicker and nuttier.

When ordering, the vendor pulled meat out of the pot, chopped it, and handed it over to us. Customers can request certain pieces, but if you’re like me and lack crucial Spanish speaking skills, then pointing, smiling, and overpaying for one’s tacos may be the best strategy.

One of Mexico City’s most famous street dishes is tacos al pastor. One can recognize al pastor by its cooking method, where layers of pork rotate on a spit next to a heat source. It’s a cousin of shawarma, which was introduced to Mexico by Lebanese and Iraqi immigrants. Mexico adopted local flavors of meat and dried chiles to create al pastor. Thinly sliced pork, pineapple, chopped onion, topped with cilantro make al pastor irresistible.

“Gracias, Vuelve Otra Vez” – Thank You, Come Again
Walking around the neighborhoods of Roma Norte and La Condesa, the lushness of the city surrounds its pedestrians. An abundance of trees and public nature spaces suggests that the city lives inside a jungle. It’s only fair to note that I experienced only a small slice of the city compared to other cities I’ve visited, but I felt at ease and safe throughout my entire trip. The people I encountered were only hospitable and generous to an outsider.

Unfortunately, at home, the narrative of the city is different. I often hear Mexico and Mexico City’s vibrant culture, rich in history and art and generous people, pawned off as political playing cards. Conversations around my trip focused on warnings of imminent danger. When asked why I was going, I said, ‘to eat.’ By opening myself to that experience, I encountered hospitable and generous individuals who welcomed outsiders.

Only one warning: CDMX spoils its visitors with warmth. While I experienced only a morsel of CDMX, I left the city enamored and heartsick. It’s a city that radiates life, and I can’t wait to experience it again.

In the neighborhood of Juarez, Cicatriz Café is run by a brother and sister team from New York City. Breezy and inviting, Cicatriz offers a more vegetable-forward menu, which can be hard to find in the city.

At every street stall or restaurant, there is salsa. Each one is entirely its own. There is no standardized salsa recipe. One must taste and smell every salsa to understand.

The salsas sit on tables in small bowls that can be distributed onto each bite of food. Smelling a salsa beforehand can give you the idea of its taste and spice level.

Salsa is not always hot, but when it is, it plays no games. The Mexican palate can handle heat. According to an Uber driver, and a painful app-driven translation, children start eating hot foods around 3 years old in the form of spiced candies.