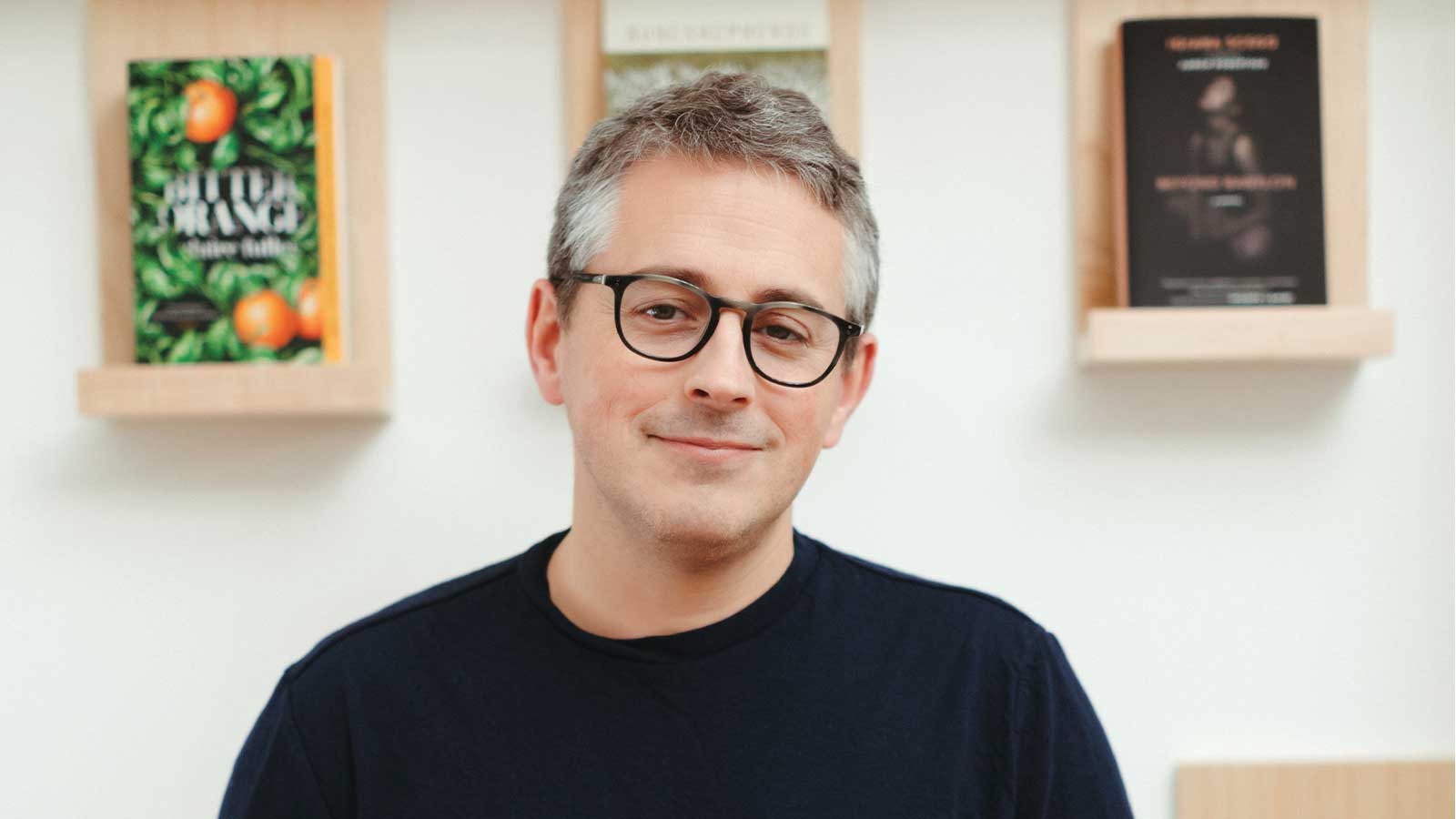 They compel him out of bed at 5:00 in the morning to spend lonely hours writing. They send him careening around the globe to London, Seattle, and Baltimore in the span of a month. They number more than 15,000 hardbacks and paperbacks on the walls of a 3,000-square-foot building in downtown Columbia.

Sure, the author, book festival founder, and bookshop owner spends a good amount of time practicing law, but books are what most engross his thoughts and minutes.

“Every day is different, and for that I give thanks,” Alex says.

Escaping the Juggernaut
If there’s one place where Alex can step away from his hectic schedule and allow for a little falling action, it’s at Skylark Bookshop, walking among the broad canyon of books with soft sunlight breaking in the Ninth Street window.

“This place brings me enormous amounts of joy,” Alex says. “I love every day that I walk in here and see all these books. It’s a beautiful place to hang out and exist.”

The shop, which opened in August 2018 and has become a celebrated fixture in Columbia’s arts scene, can trace part of its origin story back to England, Alex’s home country.

Early in his career, Alex spent eight years working in London and Paris as a corporate attorney.

It was a demanding job, and he often dreamed of creating more than large collections of legal documents.

“I’ve always been a big reader and, sometime in the ’90s, I went through a bad phase of reading a lot of terrible books,” Alex says. “I would complain to people and make claims that I could do better, and someone finally said, ‘Prove it.’”

Alex took on the challenge. He bought a computer and wrote early in the mornings before going to work. It didn’t take long for the three chapters he had in his mind to bloom into more.

When he finished his first novel, he was lucky to find a publisher quickly. He followed with another two and a half novels before giving up law in 2000 to write full-time.

In all, Alex published four books in England. Although Alex cringes a bit at what he calls his “public apprenticeship,” those first steps are what led to a career recalibration.

“Had I not got that first book published, I probably would have stopped,” Alex says. “I would have gone, ‘Oh, well that was fun, I did that thing, and I’ll give it to my grandchildren someday.’”

Something to Be Proud Of
The empirical evidence is hard to deny. As much as Alex would like to say he’s not much of a risk taker, he has repeatedly stepped into the unknown and tried new endeavors.

One such marker moment came in 2003, when he moved to Missouri with his then wife.

Even in a new environment, while trying to requalify to practice law, he made time to write. His experience as an immigrant fueled his creativity and would eventually form the foundation of “The Good American,” published in 2012 by an imprint of Penguin/Putnam.

“I particularly enjoy writing — just the act of creation and telling these silly stories just keeps me going, and when I don’t do it, I get very cranky,” says Alex, whose second book published in the United States, “Setting Free the Kites,” won the Missouri Prize for Fiction in 2018.

The idea for the Unbound Book Festival was sparked during Alex’s road tour promoting “The Good American.” The festivals he attended and spoke at possessed a depth of community and conversations that impressed him. It made him think of Columbia. If there are two features that exemplify his adopted hometown’s distinctive style, he thought, it’s festivals and books.

It took several years of dreaming and 18 months of intense coordination before Unbound made its debut in 2016.

“When I started the festival, the biggest weapon in my arsenal was my incredible ignorance of what all it was going to take,” says Alex. He created an event that’s completely free to the public, which means, as he likes to joke, he spends 11 months raising money and one month spending it.

“It was very important that we didn’t charge,” Alex says. “It’s an issue of accessibility. I firmly believe that books are for everybody, and I didn’t want any barriers to entry.”

From the outset, Alex has worked alongside countless volunteers to make the festival possible. He continues to celebrate those immense contributions and the community’s active reception. Nearly 10,000 attended in 2019. (Unfortunately, this year’s festival has been canceled due to the COVID-19 outbreak.)

The open arms Columbia extended to Unbound gave Alex the confidence to open Skylark Bookshop and fill a gap he saw in the market. Working alongside his business partner, Carrie Koepke, and six dedicated and passionate employees, has provided added assurance.

In 2019, Skylark Bookshop was named one of Southern Living magazine’s “Best Bookstores in the South.”

This type of recognition has given Alex a platform. He recently signed a contract with Blue Flower Arts to travel and talk about literary citizenship and his diverse commitments.  His hope is to use his voice to show how books, including the shops and festivals, can be a force of good in the world.

After all, in the city where he arrived a stranger all those years ago, there is a story yet to be inhabited.

“In our own little way, we are trying to make Columbia a place that its residents can be proud of,” Alex says. “The potential feels limitless in what we can do.”

The novel’s creation was sparked by real-life French novelist Marcel Proust. While reading a memoir by Proust’s maid, Alex found himself intrigued by the writer’s request for her to burn all his notebooks, which she did. But something in the back of Alex’s mind thought: What if she didn’t? What if she saved one? What if there were secrets in that notebook?

The story takes place during one day in Paris in 1927, and centers on four separate characters: a painter, a writer, a puppeteer, and Marcel’s maid, whose sagas are told in alternating order.

In addition to Marcel, lots of real-life characters populate the book but stand on the periphery of things.

Even though it takes place in a 24-hour period, the story moves at a pace that lets the narrative tend to the humanity in us all and immerses readers in the intimacy and intricacy of the cast.

Preorders are available at Skylark.

Skylark Bookshop may still be in its infancy, but that doesn’t mean the team is content with a traditional path forward.

“We’re trying to be really innovative in what we do,” Alex says.

The Skylark Reading Spa is a popular gift package meant to pamper book lovers. Individuals come into the store for a donut, coffee, and an informal conversation with a bookseller. Over the course of an hour, the bookseller makes recommendations suited to tastes or suggests new discoveries. The guest finishes their experience with a $100 gift certificate to spend, guilt-free.

Skylark also offers subscription packages of three, six, or 12 months. Each month, a book is hand-picked, specially wrapped, and mailed to your home. Customers answer a questionnaire to inform selections.

“Lincoln in the Bardo”
by George Saunders

“The Ugly Truth”
by Jill Orr

“The Wolf Wants In”
by Laura McHugh