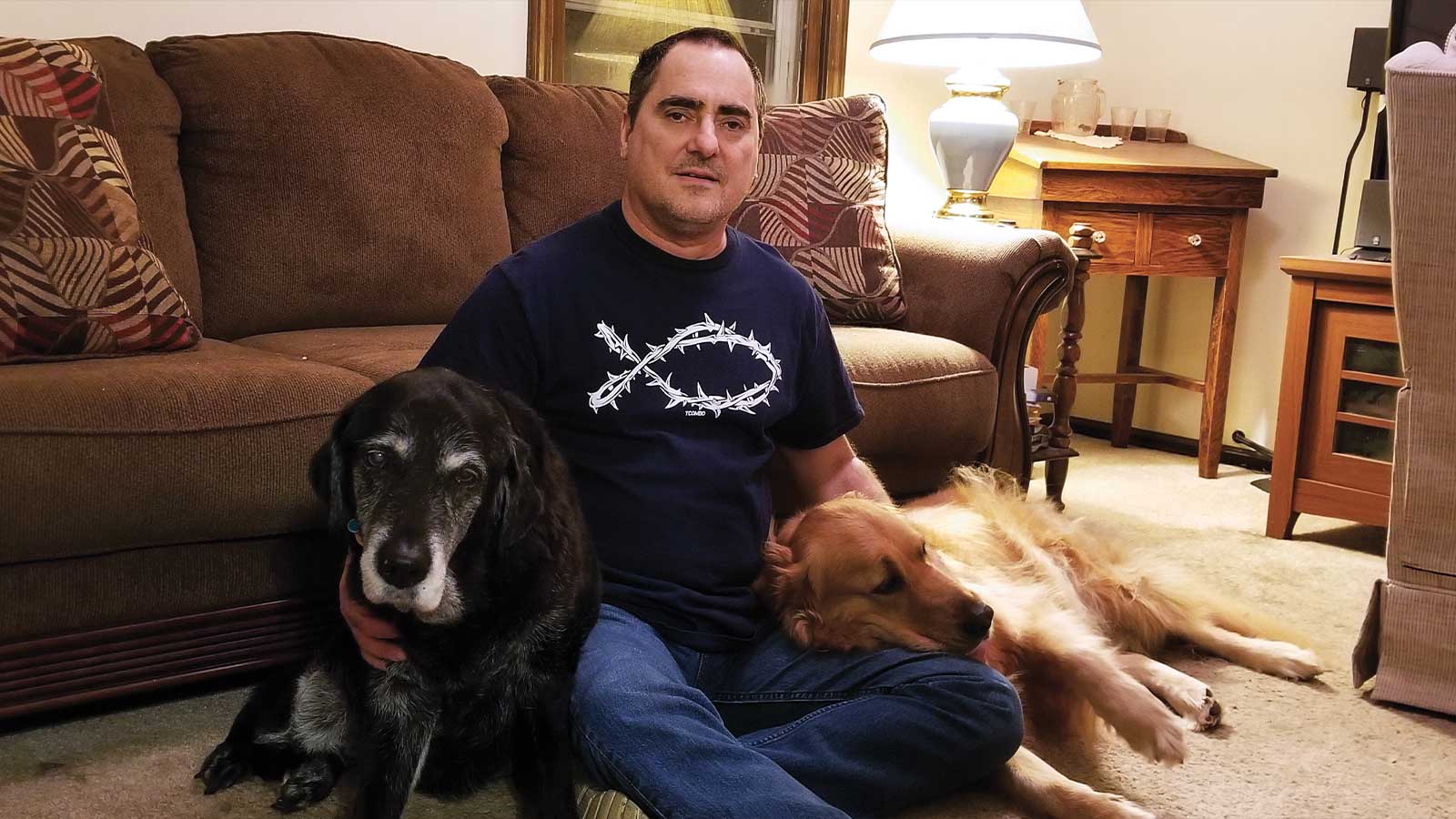 Thanks to his guide dog, Kevin Henderson can go anywhere.

If Kevin Henderson stepped out of his front door by himself, that is about as far as he would get. However, if he is with his dog, Nerf, Kevin can go just about anywhere around town.

Kevin was born with retinitis pigmentosa, a genetic disease that kills retina cells. In Kevin’s case, this disease severely impairs his vision. And Kevin says his vision impairment affects his independence.

“Independence is something you can’t put a price on. Those who can see and get around on their own don’t really understand that because it isn’t challenged,” he says. “I think this is even more so for me because I’m a husband and a dad, and there’s that role that a guy is supposed to fill,” Kevin explains.

This is where Kevin’s guide dogs, Nerf, a big golden retriever, and Sheila, a small black Labrador, come in. Kevin has had Nerf for four years and Sheila, now retired, for 16 years.

His relationship with both dogs started at the Guide Dogs for the Blind program in Rafael, California. Partnering with this nonprofit organization, Kevin trained with his guide dogs for a month, practicing everyday things like crossing streets, going into stores, and walking down hallways. But it was on night training that Sheila gave Kevin his first taste of independence.

“Back then, if I was out at night, I had to rely on a person for every single step,” Kevin says. “I remember when Sheila and I took off. For me it was like ‘here we go.’ I [couldn’t] rely on any visual cue, and man, it was like flying in a realm where I [didn’t] have to hold onto somebody, but to have that independence. When we got back to the base, it was like Christmas.”

Because of Sheila and Nerf, Kevin has independence that most people take for granted.

“Nowadays, I have to rely on Nerf fully. He keeps me from knocking stuff off and running into people. He’s guided me through airports. He’s kept me out of trouble, rather than take me headlong into it. If Nerf sees something [dangerous], he won’t let me go.”

However, while Kevin’s guide dogs give him independence, their relationship works both ways. Kevin stresses the essential trust that is developed between the guide dog and owner. Kevin must play with his dogs, even when he doesn’t want to. Like people, guide dogs need social interaction, or they become detached.

Also, each dog has a personality that Kevin must account for. While Nerf needs energetic playtime, Sheila is a relaxed “Eeyore” personality and happy just to be carried upstairs at bedtime.

For Nerf, who still works, Kevin says, “There is a mutual respect. I depend on him to take care of me when we’re out, and so if I treat him indifferently [at home], that can start to affect the bond.

Despite the responsibility a guide dog entails, Kevin constantly says one thing when talking about the independence and bond his guide dogs give him: “I’ve been blessed.”