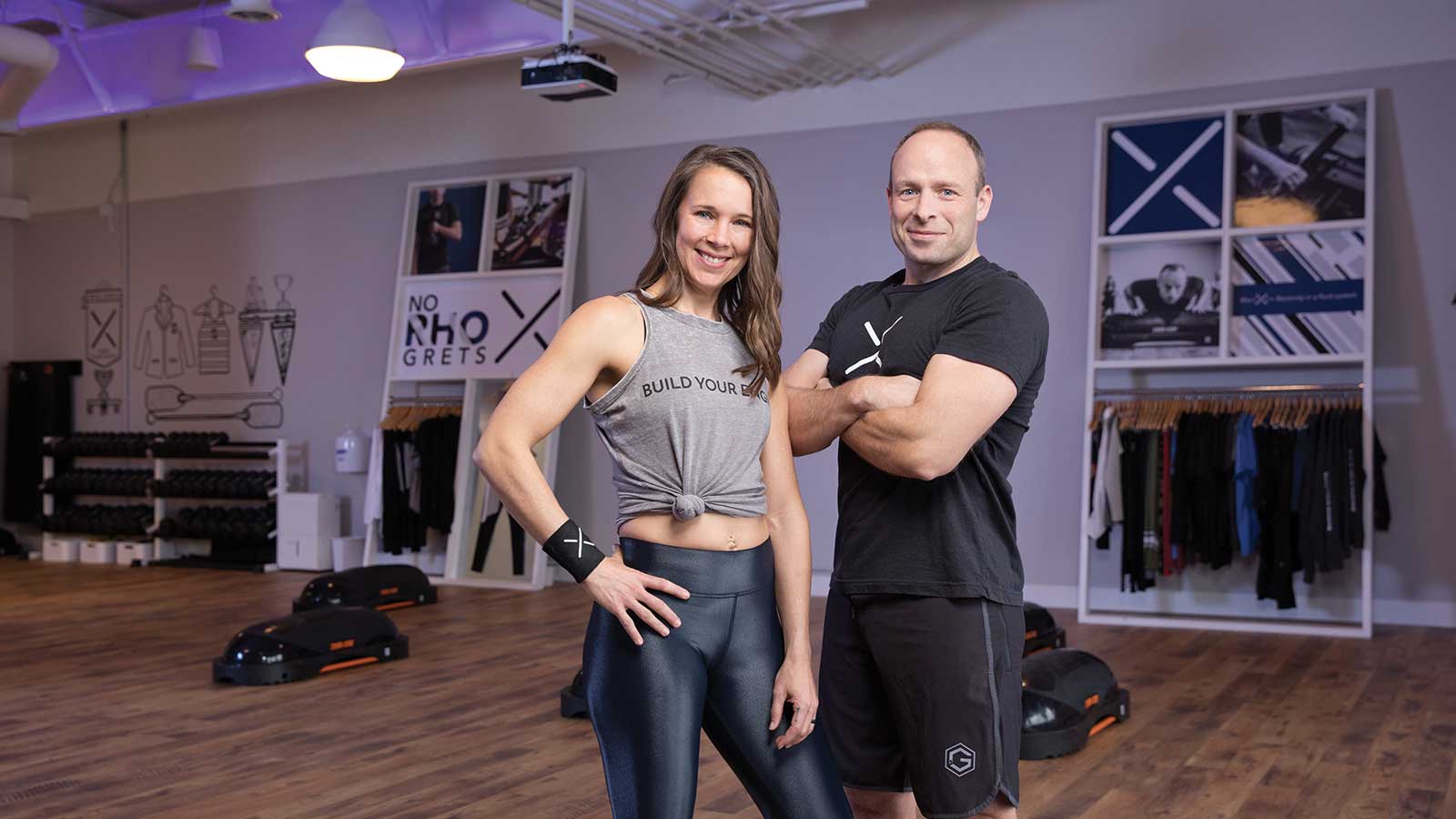 Rho Engine Room is dedicated to innovation and routines suited for everyone.

Tucked away in Nifong Square, Rho Engine Room is a space for people who want to rho, rho, rho their boats without the hassle of actually getting on the water. Owner Laura Kitzi has pioneered Columbia’s rowing scene in just her first year of opening.

“There are so many gyms that are high on technology and the wearables and projecting your score on a screen,” Laura says. “I wanted to be high on experience.” The instructor’s uplifting attitude and knack for fostering a positive environment have made a challenging exercise a bit more enjoyable.

Ready, Set, Rho!
The studio’s growing success isn’t surprising considering Laura’s fitness-packed past. It all kicked off in 1997 with a Jazzercise certification. She opened two Jazzercise locations, one of which was deemed a “premier” location by the Jazzercise parent company. Laura eventually gained a position on Jazzercise’s training development team, which allowed her to teach around the world.

With her Columbia Jazzercise operations running smoothly and an acquired knowledge about other fitness business models, Laura figured she would try her hand at something that was completely her own.

“All of that knowledge from a franchise has served me really well,” she says.

She spent six months traveling around the country to experience as many fitness classes as possible. Upon arriving back in Columbia, her sights were set on bringing a rising fitness trend to Columbia: rowing.

Now, the engine room hosts an average of five classes per day fronted by eight coaches, including Laura. The difference between other fitness instructors and Rho’s coaches is that classes are directly inspired by the world of rowing that most are familiar with, the crew. This rowing, though, comes without the expensive college education, university jackets, and competitions, at least ones with golden trophies waiting at the end.

Dusting Off the Rowing Machine
According to an article by the online publication A Sweat Life, rowing’s popularity is rising due to a pivot away from more high-impact workout trends, such as cycling and spinning, CrossFit, and HITT training. Laura says that its popularity stems from three factors: efficiency, power, and general awesomeness.

“Historically, the rowing machine has been the machine that’s sat in the corner of all the gyms, kind of forgotten,” Laura says.

Rowing works around 80% to 85% of the muscles in one’s body, as it combines cardio and strength training.

There’s no mistaking that rowing is a challenging exercise, but Laura finds intrigue in the fact that users don’t have to keep up with it in the same way one would keep up with the treadmill; the machine keeps up with them. “I can be sitting next to a collegiate football player, and I’m 46, and we both can be pushing ourselves and getting what we need,” Laura says.

The variety of people who walk through the doors of Rho are a testament to the environment Laura works to build. “Our crew has really cemented into being a solid group that really does a great job of supporting each other,” she says. They’ve even come up with their own group ethos, which is showcased on the wall, complete with sayings such as “Success is measured by meters, reps, and sweaty high fives” and “We row together.” The point of it all? To celebrate everyone’s victories.

In traditional rowing, the person who sits at the front of the boat who steers and commands is known as the coxswain. At Rho, this is one of the most supportive crew members. Don Corwin, a Rho regular, was elected this first year as a coxswain alongside another member, Jovi Rose.

“I’m not the best rower, and I’m not the best athlete in the room by any stretch of the imagination, but that’s one of the things I like about it,” Don says. “It doesn’t matter your ability or what your background is. Everybody is really treated the same and very supportive.”

Don was a longstanding rugby player and triathlete, but a hip replacement caused some issues. His body changed, and the exercises he tried simply weren’t the right fit for him anymore. He found a home in rowing. “I just tried it once and said, ‘I really like this atmosphere and I really like the routines,’ which are not routines. It’s never the same workout,” he says.

The unpredictability of sessions at Rho took the form of an outside session on the Fourth of July. “It was grueling being out in the sun doing it,” Don says. “We moved the whole gym outside in the parking lot. They really keep it active and change it up.”

From the workouts themselves to the friends he’s made, Don’s time at Rho has proved to be a positive experience. “In some ways, this is a new concept that Laura’s come up with, but she has a lot of good, old-fashioned values,” he says. “I think people would jump all over it if they could just experience it once.”

Forward Thinking
Despite Rho’s relative newness in Columbia, Laura already has ambitious plans for the future, including a proposition about opening a second location in St. Louis. With 20 years of experience under her belt, Laura says, “As I started to work on this, I immediately wanted to keep my financials tight and keep all my documentation well-ordered so that I could be ready to franchise.”

She’s also finished exercise programming and plans to sell them to people who hope to workout from home, yet another request customers have beat her to.

Until then, though, Laura plans to continue hosting an array of specialized events for her crew. For example, Laura established a popup shop event called Bro Rho where she sold ties, shoelaces, cologne, and more. Laura’s set up Rho Academy, an introductory training seminar for rowing novices. She’s also made room for Rock Bridge High School’s rowing team to work out there as well. Laura built the studio from a desire to try something new, but was met with more than she imagined, and she now works to give that back. Anyone walking through Rho’s front doors is bound to be met with an air of enthusiasm, inspiration, and community.