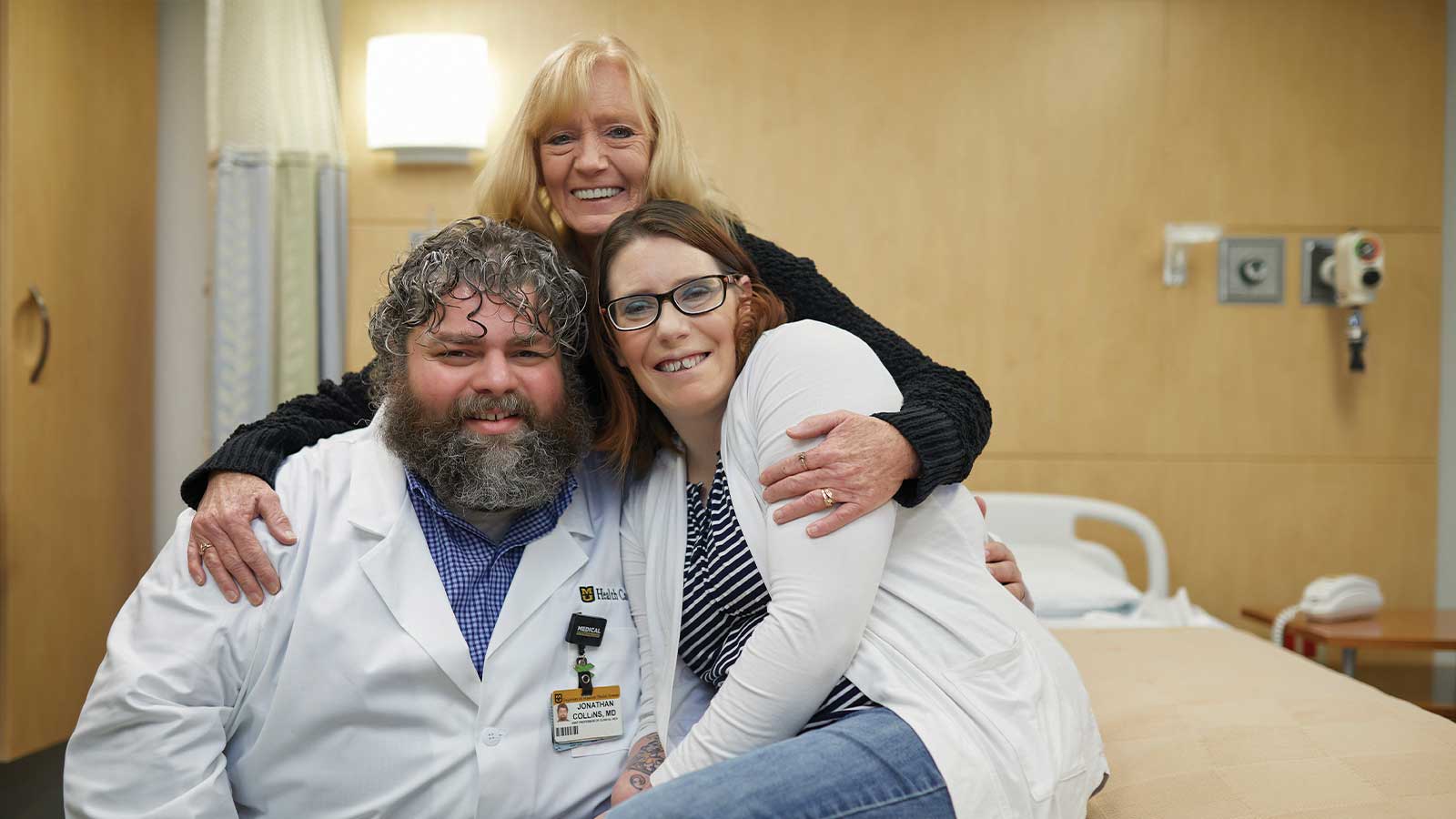 Racheal Acuff is not one to slow down.

She’s ready to share the story of her medical journey in order to help others, but first, she can’t resist sharing the joy of her daughter’s recent competitive cheerleading competition. She’s even wearing the competition T-shirt.

A little over a year ago, something like attending the cheer competition — part of the routine of being a mother, shuttling kids to sports and activities — would not have been possible. Racheal’s world changed one night in June 2018, when she wound up in the emergency room, not knowing at the time that she would end up spending more than a month in the intensive care unit.

From Routine to Upheaval
Racheal, then 31, had settled into a new job she enjoyed as an office manager, and initially she thought her medical symptoms were related to switching hours from a retail environment, along with the routine of parenting her two daughters as a single mom. “I didn’t think too much about it at the beginning,” she says.

She left work early on June 19 feeling very tired and planning on going to the doctor the next day. But she ended up driving herself to the emergency room at University Hospital that evening after noticing blood in her urine.

The emergency room was full, and Racheal knew something was serious when she was taken back ahead of other patients. Her blood pressure was so low that the nurse took it three times to confirm its accuracy. Her heart rate was extremely high. “You are a lot sicker than you look,” Racheal remembers being told. Things started moving quickly; the emergency room team immediately began running tests and started her on fluids.

From that point on, though, Racheal’s memories became fuzzy. “My hands and feet began to feel really cold,” she says. “Almost like they were frostbitten.”

Racheal, she now knows, was in septic shock. “The reason I wasn’t feeling any pain at home was that my body was shutting down.”

Solving a Medical Mystery
Racheal was admitted to MU Health Care’s medical intensive care unit, where she was seen by Dr. Jonathan Collins, director of the medical ICU. Dr. Collins came to MU after attending medical school at the University of Mississippi, drawn to patient care and interaction with people. “I have a passion for taking care of people and trying to make them better,” he says.

Dr. Collins completed a fellowship in infectious diseases after finishing his residency at MU Health Care. “It’s not all infections and antibiotics,” he explains. “You have to do investigative digging. I really view it as being a detective. A lot of the patients we see in infectious diseases are a mystery, and they’re really sick and we have to figure out why.”

In Racheal’s case, Dr. Collins diagnosed her with septic shock, likely resulting from a severe case of pneumonia. She had multi-organ system dysfunction and was sedated for three weeks in a medically-induced coma, during which time she went on a ventilator and eventually on dialysis. In addition, she had disseminated intravascular coagulation, or DIC, a complicated condition that can occur when someone has severe sepsis or septic shock.

Sepsis has a fairly high mortality rate, especially when you get to severe sepsis and shock, as in Racheal’s case.

“Sepsis is an overwhelming infectious process where the body basically goes a little haywire, and instead of having a response localized to the infection you have, the body makes a cascade of proteins to make your body do things you’re not supposed to do,” Dr. Collins says. “Your blood pressure drops; your heart rate goes up. It’s basically a dysregulation of the body’s normal physiological process causing all those problems.”

In addition to antibiotics, Racheal was given a type of medication to raise her blood pressure. The blood flow was compromised, essentially cutting off circulation to Racheal’s hands and feet. “We had a conversation with her mom about the possibility that she wouldn’t make it,” Dr. Collins says, “especially when we saw the necrosis starting in her hands.”

Early intervention and recognition are key to treating sepsis, Dr. Collins adds, but can also be difficult. “Racheal is young and relatively healthy. When she got sick, she waited it out and thought she’d get better, and by the time she came in, she was really, really sick,” he says.

Racheal is grateful that Dr. Collins was on hand to use his patient care experience to solve her medical mystery. “I owe Dr. Collins my life,” Racheal says. “If it wasn’t for him, I don’t know if I would be here. He made all the right calls at all the right moments to figure out exactly what was going on.”

The Journey Continues
Slowly, Racheal was weaned off sedation and the ventilator. Even though she had been completely sedated, she could still hear her friends and family talking to her, although she didn’t know she had sepsis until she was fully out of the coma. “Every day was a different day,” she says.

She was discharged from the ICU to the step-down unit at the hospital the day before she turned 32. But her medical journey continued. In the year following her initial discharge, she underwent seven total surgeries and was hospitalized nine times. When she first left the hospital, she still had both her hands, but due to infections, she had multiple surgeries to remove all of her toes and nine of her fingers. The medication given to her during her illness cut off the blood flow to her hands and feet, but ultimately saved her life.

While adapting to one hand has certainly been a change, it has not stopped her. She’s left-handed, and with her part of her left thumb and pointer finger still intact, she’s able to drive, write, and carry on with her life. Getting a prosthetic arm has been a game changer. “I’ve always been a problem solver,” Rachael says. “If there’s a mountain in front of me, let me move it myself.”

Through all of this, she has not missed a single cheerleading competition, and credits the support of the Eagle Elite Cheerleading family for helping with both her and her daughter’s recovery.

“I’ve always been very resilient throughout this whole thing,” she says. “I had my hand amputated, and at seven o’clock that same night, I was sitting in the front row of my daughter’s middle school play. I was not missing it.”

Racheal has never been angry, never once thought “why me?” The power of her faith has helped her keep up her positive outlook. “I’ve never faltered in my faith,” she says. “I believe strongly in the power of prayer.”

She also is quick to point out the support of her family, including her parents in Moberly, and her boyfriend, who has stayed by her side. Her daughters, now 9 and 13, have also been incredibly resilient and never once complained about the sacrifices they’ve made. “Life is harder for sure,” she says, “but it’s not terrible. I have two beautiful children who I’m going to get to see get married someday.”

Most of all, Racheal wants to share her story by being open and honest about what happened. “I’m not hiding,” she says. “I’m an advocate for health care and being aware of your own health, especially for people with kids. If it’s just a cough, go to the doctor — it could be more than just a cough.”

She encourages others to be aware of their own health and bodies. Her ultimate goal? “If I can save one family from going through what I did, then I’ve done my job.”

It’s a sentiment shared by Dr. Collins. “Our ultimate goal is to get people back to their lives and try to prevent things like this from happening in the future.”