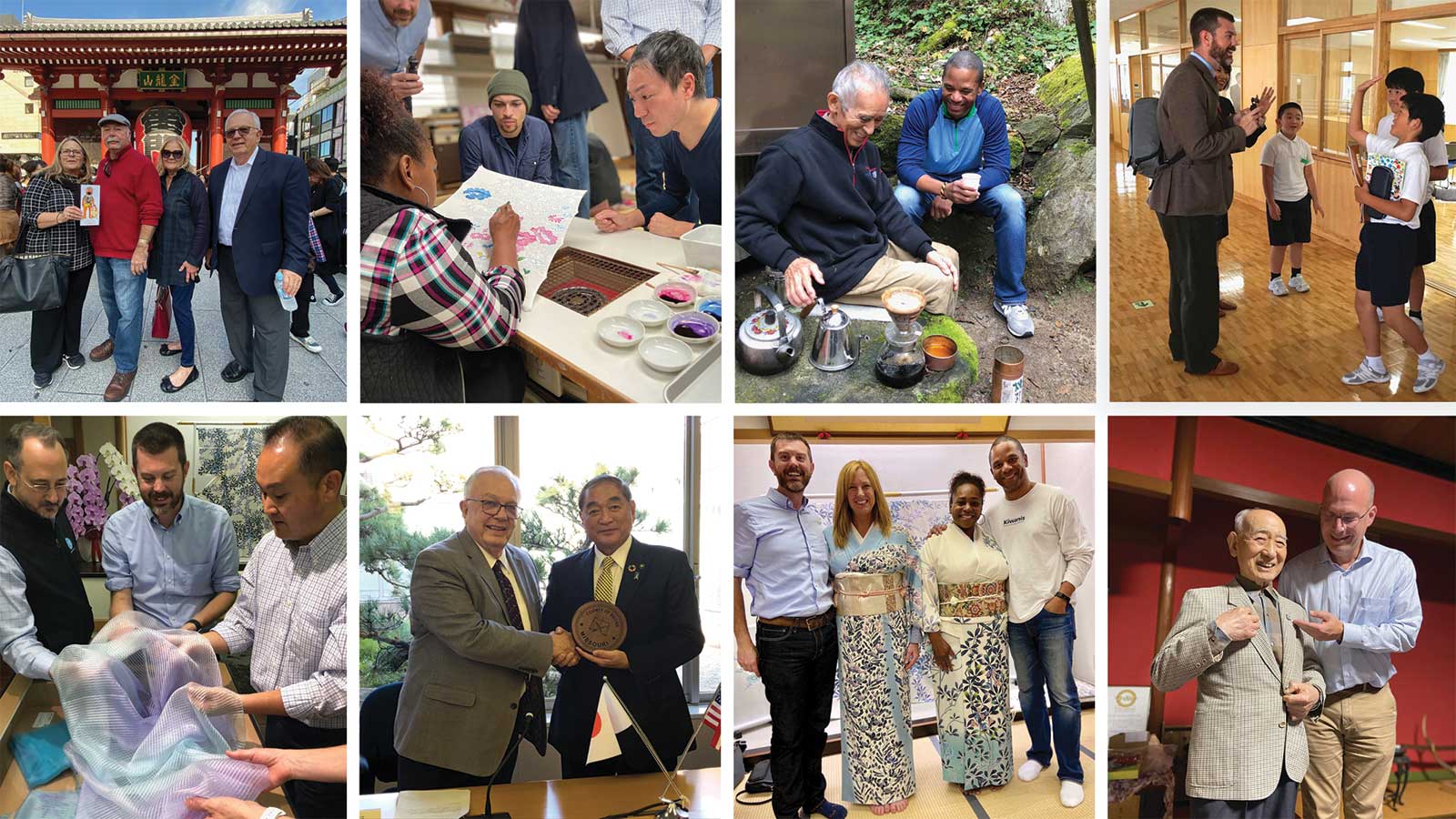 A Columbia delegation visits Hakusan, Japan, to celebrate a 30-year relationship with our sister city.

or the members of Columbia’s delegation to Japan, it was a trip made special not just by the visits to national treasure sites or traditional artisans, but for the friendships and partnerships that grew even stronger.

More than 30 years ago, Columbia signed our sister city agreement with Matto City, Japan, now known as Hakusan, a city of more than 112,000 bordering the Sea of Japan. Columbia’s sister city program — the city has four additional sister cities besides Hakusan — is designed to create opportunities for citizens to experience other cultures, explore economic development and trade, and foster partnerships.

Among the first to visit our Japanese sister city years ago was former mayor Mary Anne McCollum, who returned with the delegation this October. For Mary Anne, it was a homecoming of sorts to celebrate the city’s long relationship with Hakusan.

“It was a bit emotional to see friends from over the past 30 years and to meet their children and grandchildren,” Mary Anne says. “It was such a unique experience to look back on that many decades and see what has happened, and wanting this partnership to become even better and stronger for the next generation.”

While Columbia’s relationship with Hakusan dropped off in the post-9/11 era, it was recently rekindled, beginning with a Hakusan delegation that visited Columbia in spring 2019. The October trip to Hakusan was planned and organized by the Asian Affairs Center at MU, which has been working with our sister city partners for the past five years.

Find out more about our sister city in Japan and how the relationship is creating opportunities for future generations as we visit Hakusan with several of COMO’s 20 Under 40 alumni.

Artisans & Crafters
Carrie Gartner won’t soon forget the experience of standing next to delegation member Adonica Coleman wearing kimonos that were each worth more than $40,000. More than the monetary value was the incredible artistry that went into making each kimono.

“Making the kimonos is an ancient process, part of a fourth-generation family business in Hakusan,” says Carrie. “They use rice glue to highlight the design after they’re done painting by hand and then clean off the glue in the river. It took two women to properly dress us in the kimonos. It was so amazing.”

Carrie describes the kimono as “wearing a work of art” — and no, they didn’t get to take the kimonos home. For Carrie, executive director of The Loop, representing Columbia’s business community and visiting Japanese artisans and small-scale manufacturers were important aspects of the trip.

“It informed what we’re trying to do on The Loop,” she says. “What got me is there’s a place for small manufacturers that are highly localized and really reflect the culture. What we found the most exciting as tourists and customers are things that highlighted the region, locality, and culture.”

In Tokyo, Carrie was struck by prefab buildings under train tracks that created a pedestrian mall, where artisans used the underground spaces to make leather bags or silkscreen textiles that were then sold out front. It made her think about “how we can be clever and creative about building, particularly on The Loop. There’s a lot of space that we could reclaim if we think creatively,” she says.

The group visited a taiko drum manufacturer that has been run by the same family for 400 years. “Columbia certainly can’t compete with that longevity and history – but if we start now,” Carrie adds, “we can hit that 400-year mark.”

Carrie and fellow delegation member Susan Hart brought gifts — a key part of Japanese culture — of handmade lapel pins with a dogwood, Missouri’s state tree. Susan first met the Hakusan delegation in her role as then-Chamber of Commerce chair when they visited Columbia this past spring.

As a member of the Columbia Metro Rotary Club, Susan presented to a Rotary club in Hakusan on the economy of Columbia and our relationship with the state. She felt an instant bond with her fellow Rotary members and enjoyed a culture she described as endearing and friendly, a sentiment shared by others on the trip.
“We really are a family to them,” says Susan, vice president and partner at Huebert Builders. “I felt the same fellowship and camaraderie with our sister city individuals.”

With her role in the construction industry, Susan found the Japanese culture’s emphasis on preparation and efficiency particularly interesting, especially in Tokyo, where they’re constantly planning for stormwater and the electrical grid needs of a population of more than 80 million.

Her most memorable experience, however, involved being a part of a special meeting between the delegation and the original mayor of Hakusan, Kumeo Hosokawa, now 92 years old, who first signed the agreement with Columbia 31 years ago. This time, they met in a private room at a sake distillery, where both parties exchanged gifts, and Mary Anne and Columbia Public Schools’ superintendent Peter Stiepleman were honored with international friendship awards for beginning and re-kindling the sister city relationship.

“It truly was like old friends meeting again,” Susan says. ”It was very touching to see the old guard and then the new guard, almost like the passing of the torch. It was emotional to honor someone who had the foresight 30 years ago to create these relationships.”

STEM School Partnership for Students
Re-kindling those relationships also meant re-establishing Columbia Public Schools’ partnership with a school in Hakusan to create opportunities for Columbia students. Jonathan Sessions, vice chair of the CPS Board of Education, has a friend who went on the Japanese exchange program years ago. His goal is to see the program return to what it once was in the heyday of the 1980s and the 1990s.

That’s why Jonathan, Peter, and CPS Science Coordinator Mike Szydlowski, met with officials from the International College of Technology during the delegation’s visit to work out details of the exchange program. Under the partnership, the program will send five to 10 CPS students on a pilot program led by Mike beginning this summer. Students will need to have completed ninth grade and have an interest in science, technology, engineering, and mathematics.

Once in Hakusan, students will engage in problem-based learning at the International College of Technology, a five-year secondary school in the foothills of the mountains, with STEM lessons taught in English.

Peter lauds the partnership as a great achievement for our community. “We hope that kids will go to Japan and recognize they’re part of a larger world,” says Peter. “They have a lot to learn and a lot to teach, and with their interactions with our sister city and the youth who attend ICT, they will have a different lens on how to see the world.”

Both Peter and Jonathan shared lessons they learned about public education in Japan. Jonathan noticed there was very little technology in the schools — no smartboards, only chalkboards. In a culture that emphasizes the collective over the individual, older children walk the younger children to school, with senior citizens on the route to bow to them and wish them a good day.

There are no custodians in the schools, with students responsible for cleaning the building every day, including the bathrooms. “The students took ownership of the building,” says Jonathan. “They wanted to make sure it was beautiful, and it was.”
“There’s a sense of community, that we’re all in this together,” says Peter. “We’re a collective, nobody is better than anybody else.”

That sense of community is now set to continue thanks to the friendships that were re-kindled and created from this latest visit. “We see ourselves as ambassadors for Columbia and carrying forward what had been established,” says Peter. “There’s no way this sister city agreement for our school partnership would have happened if people like Mary Anne, Bill Watkins, and others hadn’t established this relationship. To see the power of a decades’ worth of relationship-building was pretty special.”

It will be pretty special, indeed, for the CPS students who travel to Japan this summer and the summers to come to create lasting relationships and learn about our global community. When the Hakusan delegation returns to visit, they’ll have plenty of friends ready to give them a proper COMO welcome.