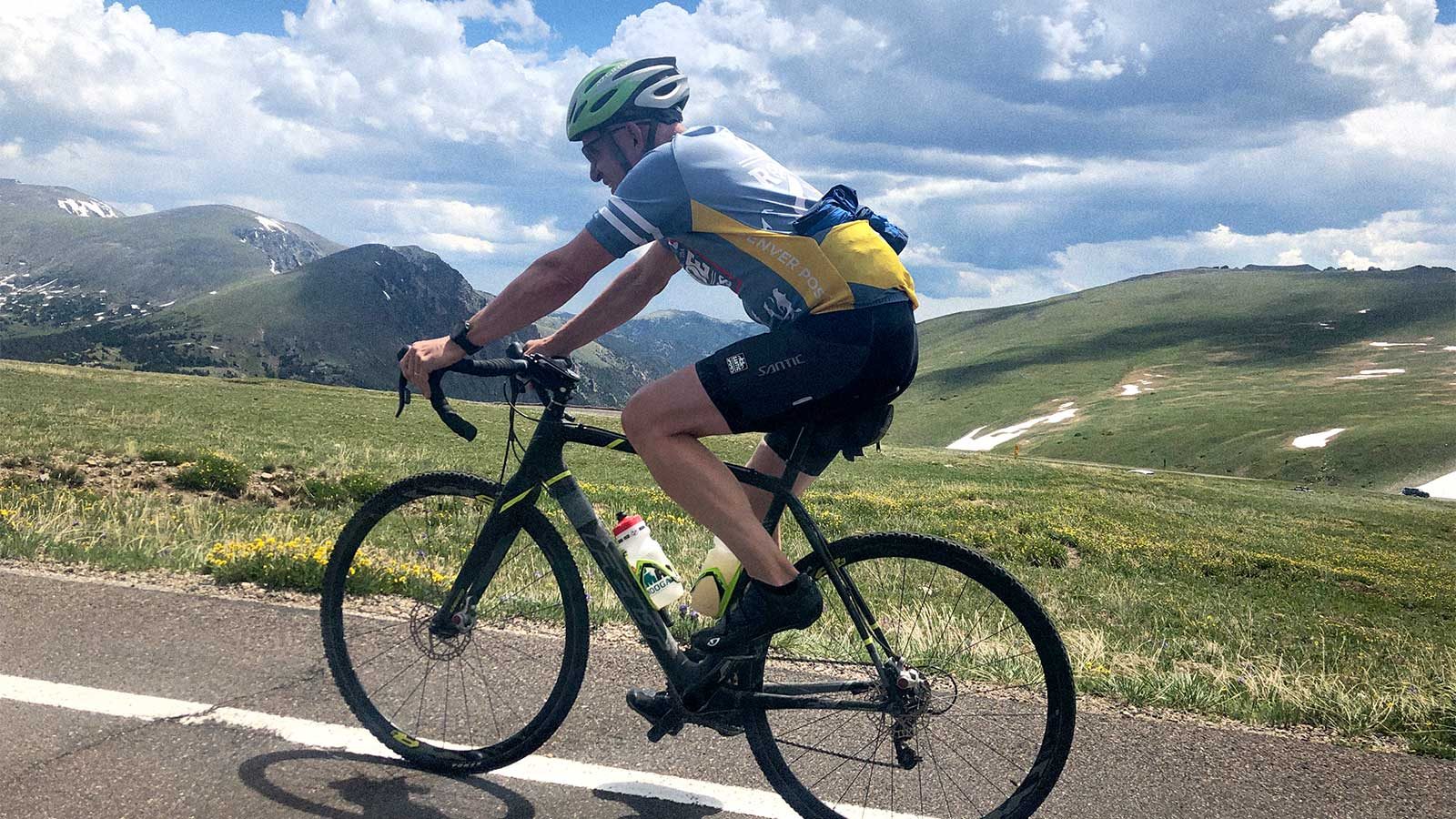 The Elephant in the Room

Pastor John Drage relishes each day after being diagnosed with terminal brain cancer in February.

Looking out the south facing windows of his East Campus bungalow, you can’t see the white limestone buildings that are a little more than a block away. But as John Drage leans forward in his blue recliner, a view of a different sort quickly becomes clear.

In his intense eyes and animated speech, you encounter the passion of this pastor for MU.

He is locked in on the fall semester. It is the time of the year that has been the energizing force in his life for the past 20 years as he has led The Rock, a church that meets on campus and consists primarily of college students.

There are services to plan, a pig roast to host in his backyard, and countless other activities to coordinate. But what cements his vision are the people, the more than 20,000 students who call MU home. He knows the worn paths they travel, the fears that weigh them down, the dreams they aspire to live out. That’s why he is not stingy with his heart. He desires to come alongside them with the love of God, with the guiding hope he believes can change the contours of human existence.

Those of us who know John best marvel at this resolve to live out his calling. There is a light in his mind that is undiminished, even while that same organ tries its damndest to make the fall of 2019 his last.

The Storm
The news came on February 20 of this year. A “category five landfall” is how he classified it. In one word: glioblastoma. In layman’s terms: terminal brain cancer. Estimated life expectancy: 18 months.

The symptoms had started the previous fall with rainbow-colored images in his vision, headaches, and a little nausea. An early diagnosis was migraines and medication eased the problem. But in early February, a week-long headache led to an MRI and the identification of a brain tumor.

More tests followed, and surgery was scheduled to remove the fist-sized tumor.

“That was a highly emotional time for me, my wife, Amy, and our family,” says John, the 52-year-old father of four. “We cried until we had nothing left and then sobbed some more.”

The surgery lasted five hours, but the hope for a benign tumor and a quick return to normal life was dashed on a dark February night when Dr. Charles Bondurant entered John’s hospital room and described the devastation glioblastoma leaves in its wake.

“I like to think I am tough and strong,” John says. “As I listened to his words I thought, ‘What are we going to do?’”

The days that followed, while John was still saturated in grief and uncertainty, also required mapping a path forward. The family selected MD Anderson Cancer Center in Houston for his treatment headquarters. It checked the three main criteria on their list: innovative, integrative, and teamwork-oriented.

Amy and John arrived in Houston in early March for a seven-week stay that involved radiation, chemotherapy, and immunotherapy. During this time, he also launched a website, johndrage.com, to share medical updates and provide authentic insights on how his faith in God carries him forward.

Amy affectionately labeled it their second honeymoon, and she took special delight in their escapades around the city on a tandem bicycle they bought used on Craigslist. The couple also celebrated their 30th wedding anniversary in May.

“Very often my thoughts drift to what life will look like after John is gone, but I try not to get too stressed out by overthinking it,” Amy says. “I do really want to be wise about how we spend the time we have left. I want to be present each day. I want to be alive.”

The Friend
Sit down with John for a cup of coffee in Memorial Union or lunch at China Chef and his immediate draw is his enthusiastic spirit. He interweaves passion with accessibility, and he loves turning the conversation to the more substantial qualities of life.

Don’t be surprised if you walk away with a new friend and a napkin or two full of ideas he jots down with a pen he pulls out of his wallet.

My friendship with John dates back to my freshman year at MU in 2001, a year after The Rock got started on campus. I was an 18-year-old living away from home for the first time, wrestling with the realities of a world rocked by the events of 9/11. He encouraged me by being overly generous with his time and instilling in me a sense that faith can be more than a hand-me-down from my parents.

In the close to two decades since, I’ve had the opportunity to work alongside John at The Rock and live with him and his family. He has been a mentor and a father figure, friend and family.

When I look back on my wedding photos from 2015, I always find my attention going to John’s face, particularly the image of him announcing my new union with my bride, Ashley. There is such joy in his smile and an almost glistening affection in his eyes.

That warmth and love is a torch I hope our second-born son, Grady John, who entered the world on the first day of classes at MU, will take from his namesake and carry on with the same fervor.

The Race
“We love John! Good job, babe,” says his biggest cheerleader just moments after turning her Facebook Live video away from the finish line.

There’s no mistaking Amy’s emotion. Her voice cracks. Her eyes well with tears. The love of her life has just pushed his body through another grueling challenge — Ironman Ohio.

The race was the capstone of a summer of training. He completed the 70.3-mile race alongside his 25-year-old son, Josh, in a little over seven hours.

Close to 50 family and friends joined John and Amy in their home state to provide support and encouragement during the race.

“For him, it was a really great way to stay focused and stay active and set his eyes on something ahead of him,” Josh says.

John’s first love was wrestling. In fact, it was his high school wrestling coach who asked him a question that sparked his faith journey. But after high school he needed a new athletic pursuit. He turned to triathlons. He’s competed regularly in the TriZou race, and in 2017, he completed his first full Ironman.

To honor that accomplishment, he got the Ironman logo tattooed on his right calf. “I’m fully alive when I’m racing,” John says.

Although he doesn’t plan to slow down his athletic pursuits, John’s biggest race is against time.

That’s why he is cherishing every minute with his family. In June, he officiated his son’s wedding in Calgary, Canada, with the Rocky Mountains as a backdrop. The family also rented an Airbnb and spent several days cooking meals, playing games, and staying up late talking.

“I really love weddings, and it was so awesome to be right in the center of [his son and daughter-in-law] Caleb and Renee’s,” John says. “It was an emotional few days for me knowing that I got to be there and participate when that wasn’t guaranteed.”

Now Amy is trying to help John to plan special adventures with each of the kids. “My job with the kids is to bless them,” John says. “I look forward to making special memories in the days ahead.”

The Future
Sometimes in life, like in sports, you just don’t have it. You’re tired. You’re worn down. In those moments, it helps to have someone you can turn toward to borrow their courage.

For Scott Ashton, the Mid-Missouri director of the Fellowship of Christian Athletes, that person is John.

On a wall in his office, Scott has a picture that says, “Let’s do something that matters.” Scott was in the middle of a difficult season of life and ministry when John spoke those words.

Every Thursday morning you can find Scott, John, and two other local pastors, Rod Casey and John Gillman, sitting over coffee and breakfast at Lucky’s Market. It’s been a weekly routine for over 10 years.

There is no agenda when they gather. They might deal in the everyday or work through a pastoral challenge or discuss some theology.

“When you find true community, you run to it,” Scott says. ”We’re sharpening each other and trying to spur each other on in ministry.”

This fall, John’s role at The Rock primarily consists of service planning and teaching. He misses the day-to-day burden of leading the church that carries much of his DNA, but he has not deviated from his life’s mission: sharing the love of God.

Scott says the only noticeable difference he sees is that John gets tired easier. “His passion hasn’t diminished,” Scott says. “He is steadfast about living out his vision. He is unashamedly living out his faith in a way that is endearing and attractive.”

Although there are still unanswered questions, unending treatments, relentless tears and restless nights, John is walking into the unknown with an abundant supply of support. Every day his phone is flooded with texts and emails and voicemails. It’s the consequence of 30 years of love and care to thousands of students on a campus that has been a temporary, yet meaningful, stop on his journey to his true home.

“How much longer do I get? We just don’t know,” John says. “If I’m going to my death in the next two or three months, I’m going encouraged. I’m getting to experience my legacy. Most people don’t get that gift. Because of my career, I’ve got a wake behind me. I gave a lot of energy and love away.”