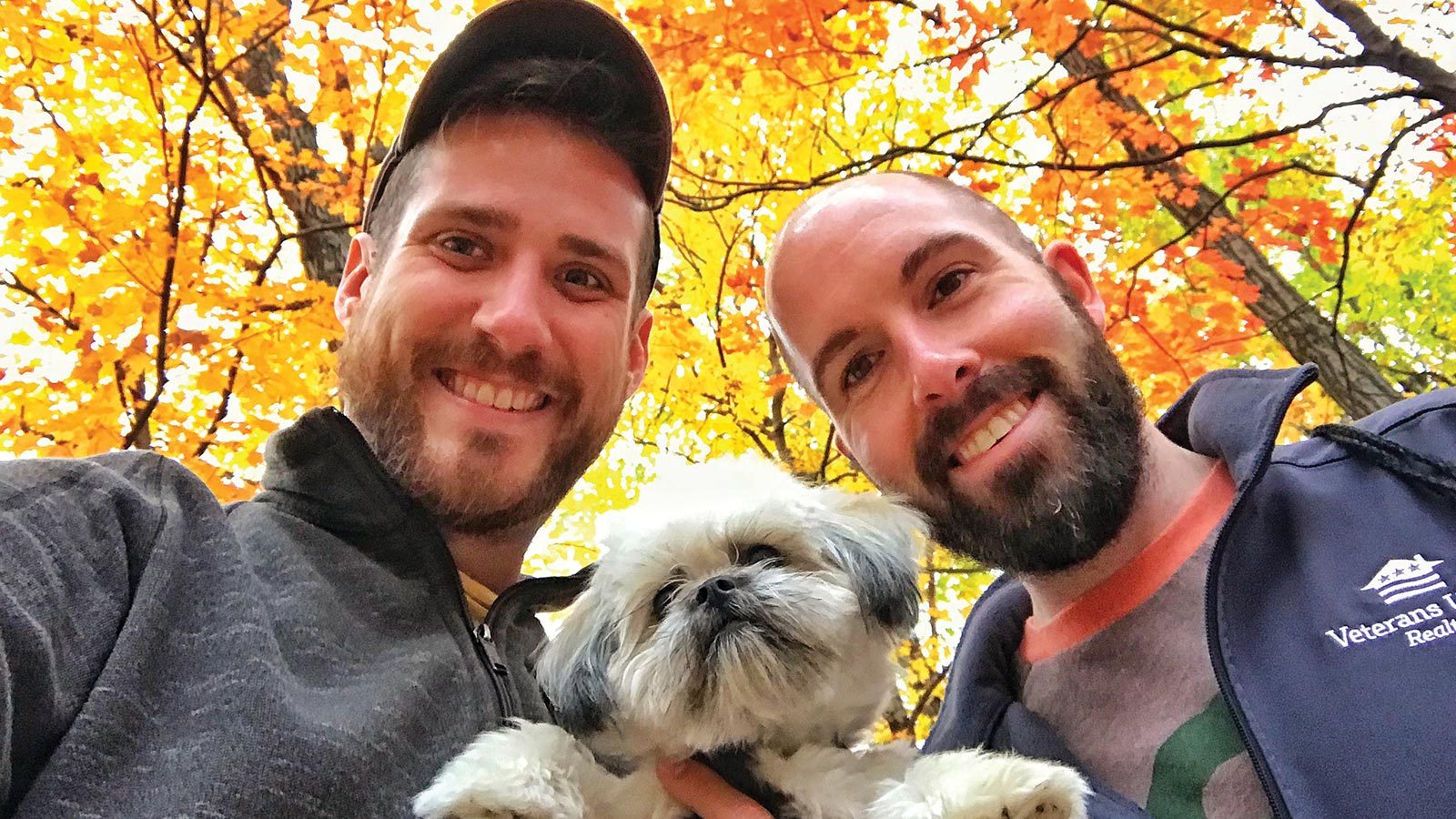 The old saying is true: dogs are man’s best friend. Canines provide love, loyalty, and entertainment for men everywhere. What sets John Ruppert and Ryan Gavin apart from other men with a dog is their willingness to repay the favor. When it comes to their three-year-old Maltese Shih Tzu mix, the couple makes sure that they are their dog’s best friend as well.

Ryan puts it more bluntly. “We probably spoil our dog too much,” he says.

The pup’s name is Herbert officially, but in conversation and Facebook updates, John and Ryan call him Herbie. The couple rescued Herbie from the jaws of a shelter in December 2016.

Ryan explains how Herbie’s distinct facial markings inspired his old-fashioned name. “He has an old man face,” he says. “With this Fu Manchu-looking mustache.”

John says the couple picked up Herbie just a few months after their marriage in October 2016 because they sought the “unconditional love and companionship” provided by a dog. Additionally, Herbie’s Maltese and Shih Tzu heritage made him the hypoallergenic furry friend Ryan required.

While Herbie may have come from humble origins, John and Ryan have ensured that their best friend has spent the past two and a half years in the lap of luxury.

Herbie enjoys kiddie pool photo shoots and constant cuddles. John and Ryan keep tabs on the dog through their Furbo, a pet camera featuring two-way audio, video, barking alerts, and a treat dispenser. And Herbie rarely misses his six-week grooming appointments, where he receives far more than a basic wash and trim.

“He gets a nicer spa treatment than I do,” Ryan says. “He gets a blueberry facial scrub for his eye goobers.”

John admits that spoiling Herbie can get out of hand at times. “He could probably jump on the couch on his own,” he says.

“He can,” Ryan interjects. “He does it when you’re not around.”

Ryan recalls one instance where the dog’s shenanigans came to a head. On a morning walk with John, Herbie stepped on a prickly thistle. Herbie yelped, and in response, John “picked him up and babied him and gave him extra treats,” Ryan says. For the rest of the morning, Herbie limped around the house. But when Ryan came home for lunch, he found the pup seemingly healed.

“He came running out,” Ryan says. “And then realized ‘oh wait, I’m not acting anymore.’ So he picked his paw up and started limping again. He tried to act again with John later that day, too. It was absurd.”

Yet all in all, the couple agrees that bringing Herbie into their lives has had a net benefit. Taking careful care of another living thing brings new depth to John and Ryan’s partnership and personal growth.

“It’s helped us in terms of imagining what parental responsibilities might be like, talking about when he pooped last or how much he ate,” Ryan explains. “It’s interesting to see how we interact in that mind frame.”

“I think he’s also helped me a lot with patience and discipline,” John says. “He’s definitely increased the amount of joy in my life.”