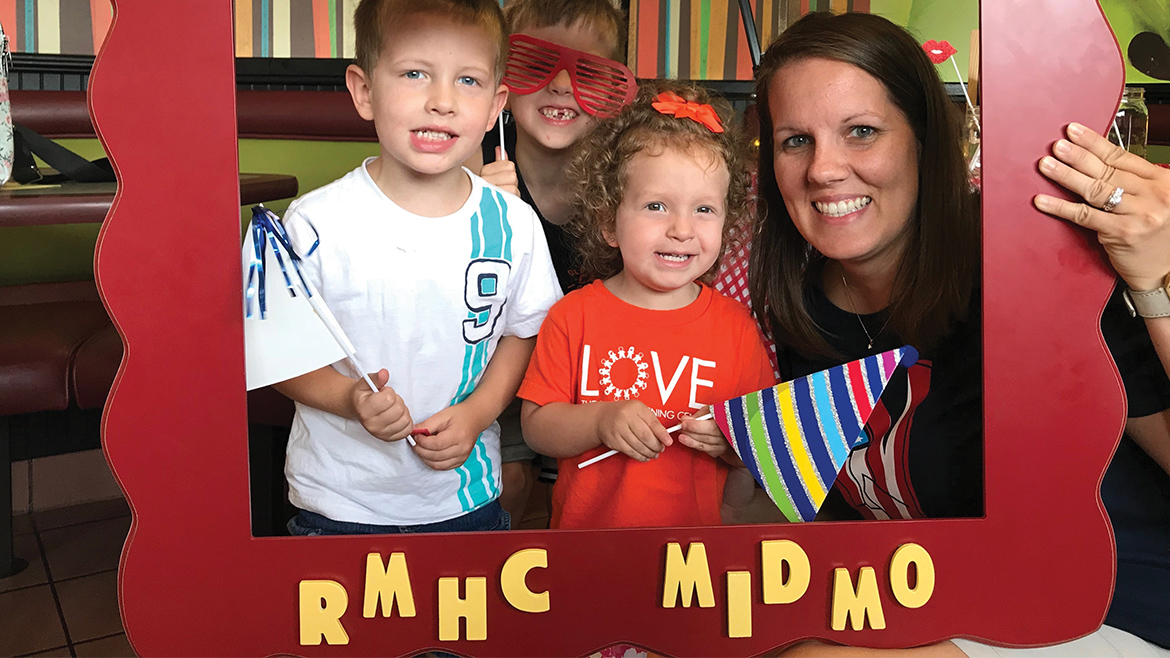 A Ronald McDonald house is like any other house. It’s a place to rest and recharge, a place that holds memories whether good or bad, and a place to come together.

What’s different about a Ronald McDonald home, though, is the families inside.

A staple in communities across the United States, Ronald McDonald House Charities enable families to stay together during their child’s medical crisis and hospital stay by providing them a home away from home.

Ronald McDonald houses relieve the stress on families of figuring out where their next meal is coming from, where they will spend the night, how will they do laundry, and their heaviest burden, how they’re going to afford everything. Ronald McDonald House Charities answers their call, free of charge. This support lets families concentrate on the care of their child.

“The cool thing about this location is that we’re within walking distance of many specialty clinics and the hospital, but you can look east of us and it’s a neighborhood and a city park,” says Terri Gray, the chapter’s executive director.

BUILD IT AND THEY WILL COME

Before Gray was the executive director, she spearheaded the fundraising for the new home. The new building doubled the size of the original house and fits 18 families. The home boasts wider hallways, private baths in guest rooms, and added recreational rooms like a library.

In addition to the physical change of space, Gray also ushered in a new attitude, a caring and compassionate ethos from all those who interact with the families.

“The most challenging issue on a day-to-day basis is that we’re dealing with families in extremely stressful situations,” says Gray. “There’s still a life back home that they’re trying to manage and they have a sick child or a child in need of treatment to deal with as well.”

Anyone with a child in the hospital or in need of treatment is eligible to stay at the house, no matter their financial situation. The only requirement is a referral from a social worker.

“They’re not in a hotel, where people are typically celebrating or vacationing. This is a house designed for families in medical crisis. I think there’s a lot of benefit in them coming together and sharing their stories and experiences,” says Gray.

As part of the 35-year celebration, McDonald’s restaurants across Missouri hosted reunions for former RMHC families to reconnect.

“There is a community feeling between families. Friendships have been formed here. We’ve had several people tell us they stay in touch with families who were staying here at the same time as them,” says Gray. “That’s a nice bonus of the house — to develop lifelong friendships.”

In 2018, the average house stay was 12 nights; however, families have stayed for as long as four months at a time. It all depends on what the child needs.

“Families more often than not check in without planning to be checking in that night,” says Gray. At 75 percent, the biggest group of guests come from the neonatal intensive care unit. Overall, 85 percent of the families at RMHC come from the Women’s and Children’s Hospital.

“The house was designed to be able to add a wing, which would double the house in size,” says Gray. “The board is monitoring our numbers to see when we should add another wing, but as you know, it’s a huge undertaking.”

“Think about what you spend on a monthly basis and then multiply that by 18 families. It adds up,” says Gray. “I never want to put the organization in a position where we outdid ourselves and are in a situation we can’t afford.”

The need for expansion is quickly growing. In 2018, nearly 400 families stayed 5,480 nights at the house. The house was full 91 percent of the year, often with a wait list.

RMHC and its local chapters are set up somewhat like federal and state governments: There is an overarching global entity that provides marketing or other support, but the day-to-day operations, including the $800,000 yearly cost of running the house, falls onto the chapter.

“We’re not state supported. We’re not federally supported. We are not a United Way agency. We raise what we need,” says Gray. “Our primary funding comes from people living in Boone County, especially the Columbia area. The businesses are very supportive of us in terms of sponsorships and services they provide.”

One possible expansion idea the board is exploring is installing a family room within the Women’s and Children’s Hospital. The family room would provide things such as hot meals and a break from harsh hospital surroundings. Gray says the board is interested, but the option is ultimately limited to the space available within the hospital. The discussion is always centered around “what’s the best way to serve more families?” Gray says.

“I’ve been pleasantly amazed and humbled that the community supports us the way that they do and supports the families that stay here,” says Gray, “We cannot do it alone. We could not do it alone. The littlest gesture to the grandest gesture all adds up and it helps us do what we do and accomplish our mission — to serve families.”