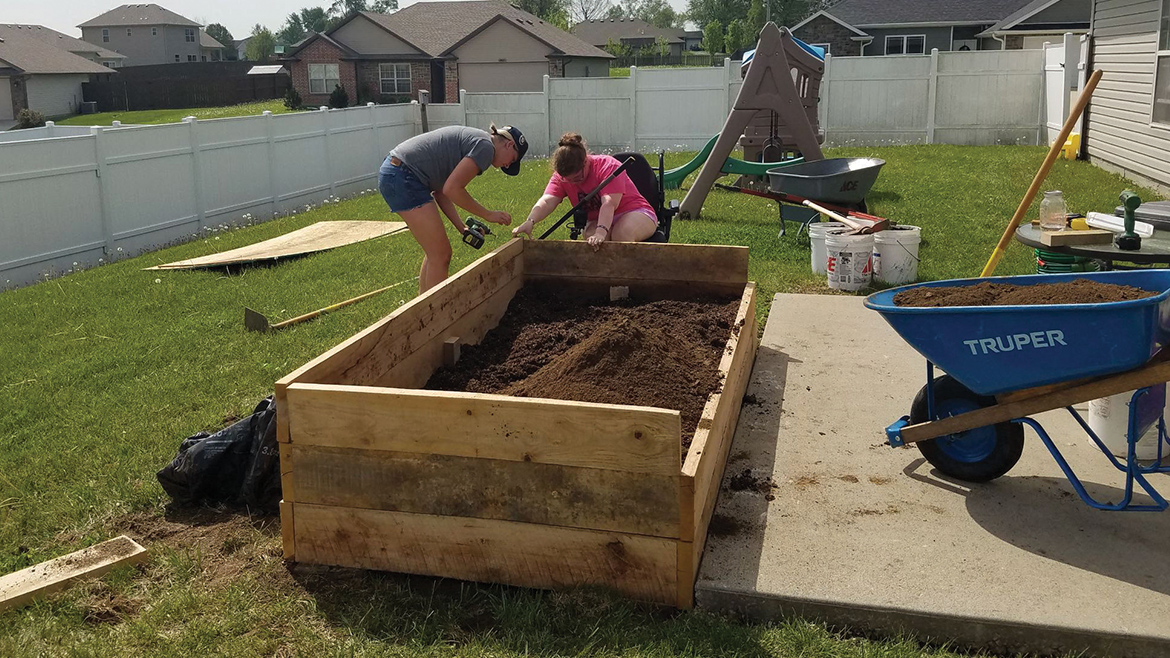 There is an old proverb that says “Give a man a fish and you feed him for a day; teach a man to fish and you feed him for a lifetime.” Change the proverb to talk about plants and it might as well be the Columbia Center for Urban Agriculture’s mission statement: “To enhance our community’s health by connecting people to agriculture and the land through hands-on learning opportunities from seed to plate.”

Brandy Schrag’s story is one of many that can be told about the impact CCUA is having on Columbia.

Schrag is experimenting in her kitchen. For a busy, wheelchair-bound, single mom, this is a big deal. A few years ago, Schrag probably couldn’t have identified a basil plant. Now, thanks to CCUA, she has homemade pesto in her freezer.

Schrag is learning about gardening through CCUA’s Opportunity Gardens program. Trish Woolbright, the Opportunity Gardens coordinator, came out to Schrag’s home with volunteers and helped her install a raised garden bed, filled it with soil and compost, planted seedlings, and advised her on upkeep. Woolbright even checked to make sure Schrag had a gardening hose.

Schrag is now in year two of the three-year program and continues to receive on-site mentorship for her garden. Any family that qualifies for the free- and reduced-lunch program at Columbia Public Schools qualifies for Opportunity Gardens.

“I’m finding that I’m branching out a little more,” says Schrag. “Until I started this, I was completely ignorant, even about the herbs. I didn’t even know how those grew! I guess I thought they magically appeared.”

“I get to watch adults learn things all the time, and it is magical,” says Woolbright. “It goes from people who have never touched dirt and who eat mainly fast food to getting them into gardening and cooking at home all the way to selling produce and anywhere in between.”

Last year, Woolbright had more than 350 mentoring experiences. Those experiences included teaching gardeners the difference between weeds and peppers, how to plant garlic, and how to cook greens. She taught Schrag how to can her tomatoes, and this year, Schrag canned 27 pints of tomato products from just two plants. Her particularly picky boys even liked the salsa she made.

Partnerships like the one between Schrag and Woolbright are the norm at CCUA. Aside from the Opportunity Gardens program, CCUA partners with the Boys and Girls Club, Lucky’s Market, Kilgore’s Pharmacy, Patriot Place, Columbia Public Schools, and many others. No one partnership is like another; they are all tailored to the group or individual.

“Through those partnerships, we can reach lots of different people,” says Billy Polansky, CCUA’s executive director. “With Opportunity Gardens, each one of our clients is different, and the service is personalized to help that person be successful as success is defined for them.”

For Schrag, that success required a raised garden bed that she could access in her wheelchair. Kilgore’s, for example, succeeds when children from the Nora Stewart Early Learning Center learn that vegetables come from the ground, not the grocery aisle. Lucky’s succeeds when it’s able to strengthen community ties by donating produce grown in their CCUA-managed milk crate garden to the Food Bank. And all of this learning and community-building equals success for CCUA. “We really don’t do anything on our own,” says Polansky.

Over the next year, CCUA will transition their headquarters over to the new agriculture park located at Clary-Shy Park on West Ash. The most welcome change will be space and infrastructure.

CCUA has been growing produce at their urban farm on Smith Street for a decade, though you could say they outgrew their space a long time ago. The farm currently has five sheds and too many tarps. The nonprofit is less efficient without proper storage space.

“Equipment needs to be protected,” Woolbright says. “Straw bales really suck when they get wet and moldy. They’re ridiculously heavy.”

The city approved the first phase of the Agriculture Park in 2017, but it has been in the works for the last three years. CCUA, the city, Sustainable Farms and Communities, and the Columbia Farmers Market (which has been at that site since 1980) have come together to plan and promote the project.

The park will house the farmers’ market (under a covered pavilion), CCUA offices, an outdoor classroom, a barn and greenhouse, a teaching kitchen, an urban farm, flexible event space, and soccer fields.

Aside from the infrastructure and community, the outreach opportunities will grow too.

“I’m very excited to have such a big presence in town to entice more people to want to garden and eat healthier food,” Woolbright says. “And I hope it can be a place they can learn and ask their questions and be inspired.”

Nothing should change with the Opportunity Garden program. It will continue to do what it does best — empowering gardeners in their own homes.

Schrag is excited for the next growing season.

“I want to do my own pickles!” she says. She also hopes to add trellises for cucumbers, which, she has learned, have vines that like to climb.

Vision: CCUA envisions a community transformed by good food for all and the skills to grow it.