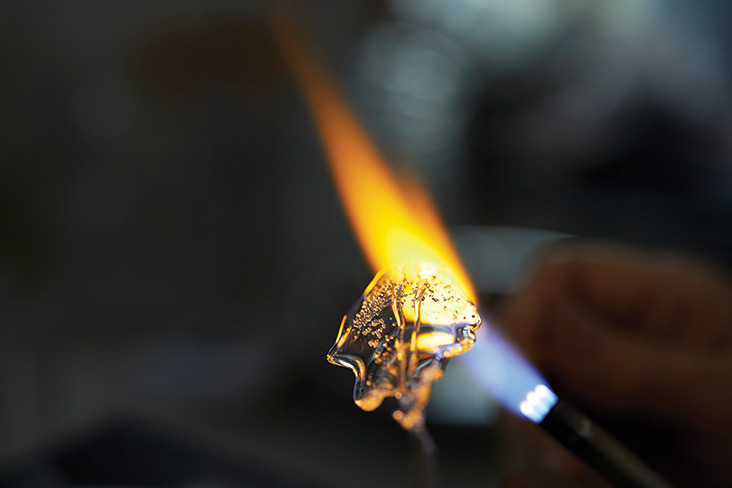 Transformations: From Heavy and Fazed to Light and Free

From the sidewalk, the glass studio of artist Susan Taylor Glasgow appears to be any other well-kept, cheery older home in north downtown Columbia. When one walks through the door, the space is cozy and homey. But the only baking that takes place here is done with glass.

“I describe my work as ‘homemaking gone awry,’” Susan says of her unique style. “My pieces often explore the dichotomy of women in the household. I overlap fairy tales with domestic expectations, the feminine form with 1950s influences.”

Some examples of Susan’s whimsical work include frosted, fragile slices of cake, chandelier dresses, corsets, dustpans, and even a toaster. The result of them all is something entirely familiar, but fresh. 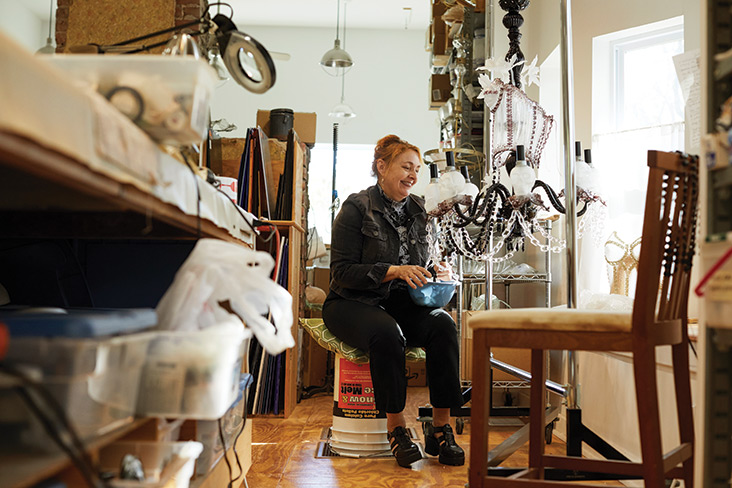 The Beginnings of a Glass Baker

Susan grew up in Duluth, Minnesota, where her interest in stained glass began in her childhood. As a teenager, Susan saw her interest deepen, and finally, opportunity struck: a neighbor with a knack for making stained glass needed a particular dress to be made, so Susan traded her seamstress skills in order to learn the process.

Susan sharpened her stained glass skills while she was in college. “I started adding stained glass to the houses we were renovating,” she says of her early projects with her husband, Brian Glasgow. The couple met while they were both attending the University of Iowa and working together at a local restaurant.

After graduation, Susan worked in graphic design for a year before running her own sewing shop in Iowa City for two years. She and Brian then moved to Missouri.

It was at this time that Susan started a sewing and alterations shop called On Pins and Needles, which was located on College Avenue. After 12 years, Susan sold the shop to the manager and pursued her career in art, first as a mixed media artist, then as a glass artist, and now back to mixed media with glass as the main material.

Susan remembered that when working with stained glass as a youth, she didn’t like the heavy lead lines, and so she reasoned, “Well, I already know how to sew, so I’ll stitch it together!” she recalls. “Looking back, I’d say I’ve always practiced art.”

Susan has created a signature style by including stitching in all of her glasswork. Some of the stitching is practical, holding pieces together by wire and ribbon, while other stitching is just decorative.

“In the beginning, I was a purist,” says Susan. “I had to use all glass and have it stitched together. Over these 10 years it’s evolved. If just stitching glass doesn’t provide the vision I have in my head, then I will add another material.”

These “other materials” have included wire, ribbon, clay, and found objects such as buttons. Susan’s work utilizes the techniques of kiln-forming and casting. Kiln-formed glass starts out as either sheet glass or jagged, broken pieces of glass that are melted into custom-made molds.

“It’s a much slower technique than glass blowing,” says Susan. “I like the methodical process. It allows me more time with the piece, and I enjoy the way the work evolves.”

A problem-solver by nature, as Susan’s craft began to take shape, she wasn’t aware that there were schools teaching glasswork. As a result, she is self-taught. “There is good and bad in that,” says Susan. “I spent a lot of time reinventing the wheel, but the end result is a very unique style, uninfluenced by traditional influences.”

Susan is most inspired by “artists who create from the heart because of the need to see an idea or concept come to life as a physical object” and “artists who continue to explore through times of success when it’s easy to confuse art from product.”

Susan says, “Women are my greatest inspiration, our imprint on ‘mankind,’ our daily lives, our unique roles in societies around the world, and how we are shaped by our individual journeys.”

Amid an endless list of other projects, Susan continuously works on an ongoing series of pieces she’s titled “Bound” that explores how powerful and impactful relationships can be.

One of Susan’s favorite creations is a 10-foot-wide glass and mixed media nest entitled “The Communal Nest.”

“Any time I install ‘The Communal Nest,’ it is an exhausting and amazingly rewarding experience,” says Susan. “I’ve installed it six times across the U.S., so I forget how impactful the piece is until I see the faces of the visitors.”

When entering Susan and Brian’s “estate,” the visitor is delving into the world this local couple has created though their dedication to each other and their crafts. A fence made of flowers connects three historic homes sitting side-by-side on 10th Street, comprised of their living space, Brian’s metal workshop, and Susan’s studio.

“We love it,” says Susan, “and have been fascinated by the ebb and flow of the neighborhood over the years.”

In addition to their individual artistic endeavors, the couple has self-renovated 12 older Columbia homes over the past 25 years, mostly on Ninth and Tenth Streets in downtown.

The home that houses Susan’s studio has tall ceilings, ample lighting, and white walls, forming a most inviting blank canvas for her to construct her creations. Around every corner is another part of the process: one room containing various kilns; another with a very large workspace table and various sheets of glass; a photo studio for taking pictures of the finished products; a cold working and sandblasting area in the basement; a packing and storage space and apprentice apartment upstairs; and, last but not least, a front sunroom for relaxing.

Brian, whom Susan describes as a “renaissance man,” is currently building a hoist to the second level in the back of Susan’s studio. He also makes the metal stands and shipping crates for Susan’s work.

“He doesn’t understand how much he adds to my ability to do whatever I want,” Susan says of Brian’s contributions.

For those wishing to see Susan’s works locally, she will be one of the featured artists at the Sager Braudis Gallery in January. Sager Braudis is one of Susan’s favorite places to show her work “because of their undying enthusiasm for my work and the opportunity to show locally,” she says.

When she’s not in her studio, Susan is traveling to set up exhibits or teach in private studios all over the country.

Susan will also have a museum show at the Bergstrom-Mahler Museum of Glass in Neenah, Wisconsin, running through December. The show is entitled “Sharper Edges: Women on the Edge of Glass” and explores the attributes women working in glass bring to a traditionally male-dominated field. 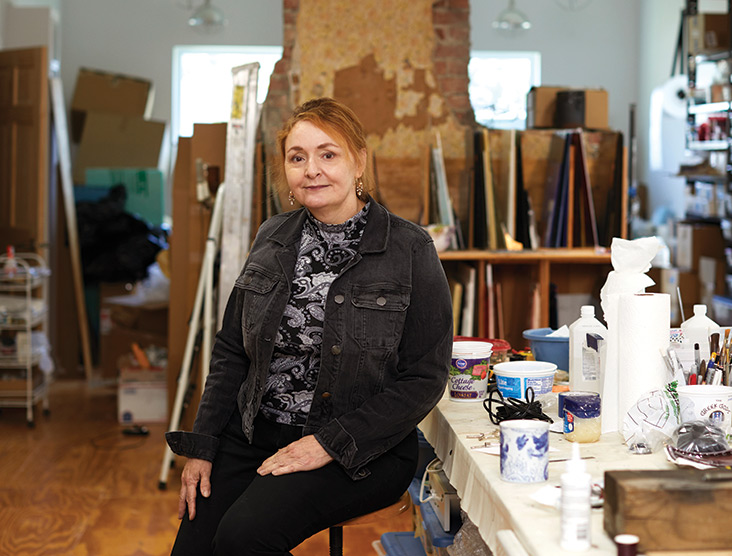