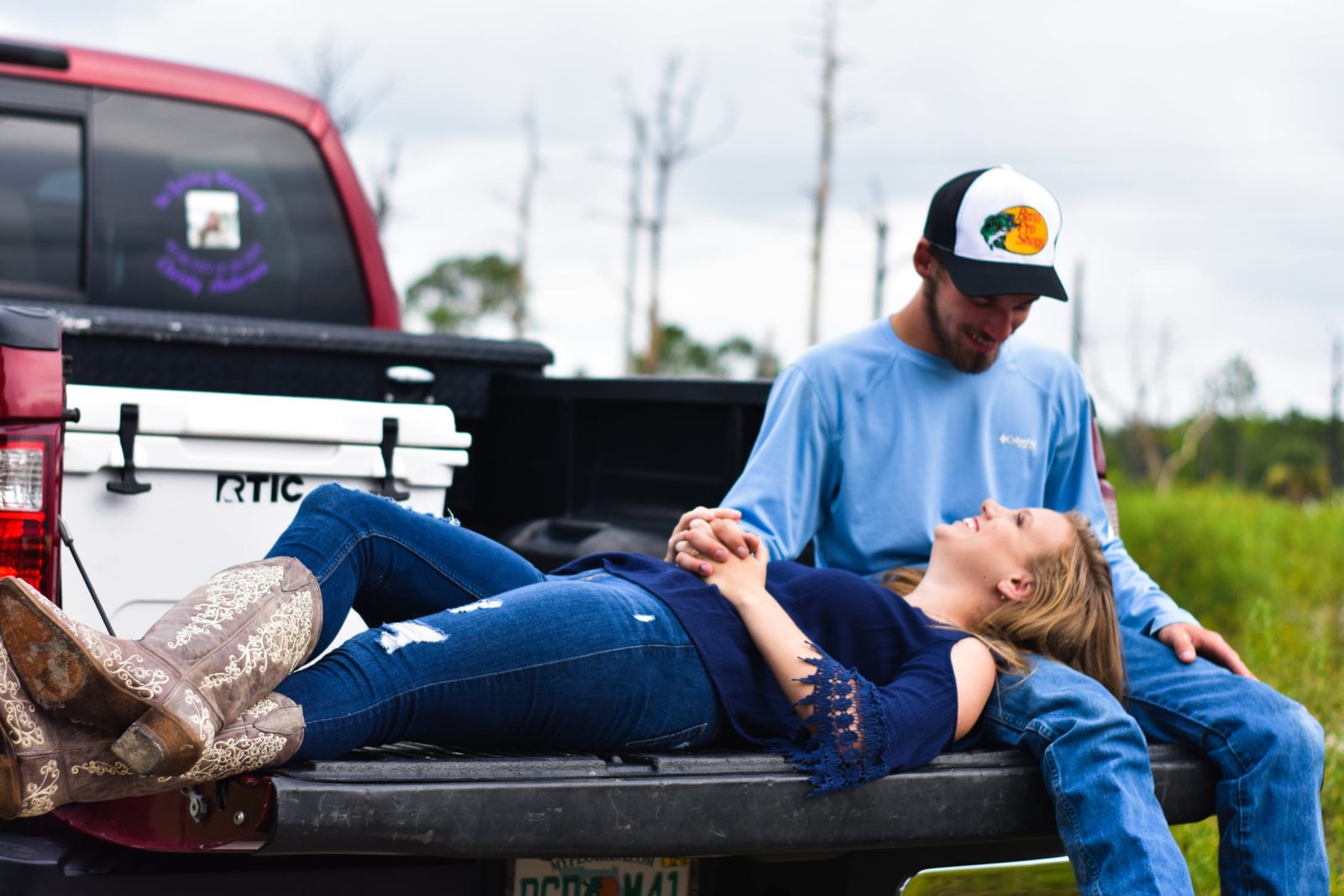 The conclusion to a short story inspired by our editor’s favorite country song.

Read the beginning of the story here.

Sam couldn’t help but grin from ear to ear as she drove toward the general store. That was fun, she thought, wondering what the story was behind the handsome cowboy at the farmer’s market. She would have to stop and try this sweet tea. She was thirsty, right?

Pulling into the parking lot, Sam noticed the Coke sign immediately. The store was old, but quaint. Not one of those new ones put in for the tourists on the interstate. This one had history and character, she could tell. As she walked inside, she was greeted by a pleasant “Good afternoon, how can I help you?”

“You must be Miss Belle,” Sam said. “The gentleman down at the farmer’s market said I should come in and try some of your sweet tea.”

“Gentleman, huh? Did he happen to mention my peach pie?” The older lady asked with raised brows.

“No, just the sweet tea,” Sam replied with a little giggle.

“I’ll tell you what sweetie; I’ll make you a deal.”

“That gentleman at the farmer’s market happens to be my son, Brennan,” the gray-haired woman said proudly. “He promised to come by earlier for some tea and pie, but he hasn’t made it yet. If you’ll take it to him, yours is on the house.”

Sam was sure she saw a mischievous look in Miss Belle’s eyes, but she couldn’t resist. “Sure, load me up. I’m at your service.” This adventure was getting better by the minute, she thought.

This wasn’t really happening, was it? Brennan couldn’t believe his eyes. Was that her convertible actually driving toward him? Was she going to stop? Was this his lucky day? It was her. Throwing his last pork rind on the ground, he stood up and waited anxiously for her to exit her car.

“Get lost again?” He asked, his brain struggling to form intelligent words.

“No sir, cowboy,” Sam shot back playfully. “I actually came back with a delivery. Seems Miss Belle thought you needed some sweet tea, too.”

“She did, did she?” Brennan laughed, picturing his mom talking with Sam.

“And some pie. Seems someone was supposed to stop by and hadn’t made it yet.”

“That is true, and I am hungry, so hand over the pie.”

“Not so fast” Sam retorted. “There was only one piece left so we have to share.”

“Oh really,” Brennan laughed, totally amused by his mom. “Did she at least give you two forks?”

Yes it was; Brennan thought to himself as he hopped on the tailgate of his truck and motioned for her to do the same. It was shaping up to be his lucky day indeed.

“So, did you grow up around here?” Sam asked, tasting a bite of pie.

“Class of 2009, Seymour High Hawks. You’re looking at the captain of the cheerleading squad and editor of the yearbook. Gosh that was a long time ago,” Sam sighed.

“Seriously. Cheerleader, huh? Well, you probably never ran into me because the cheerleaders never came to the baseball games,” Brennan added jokingly, while quietly trying to steal a bite of Sam’s pie.

“Well, eat it then, you’re killing me.” Brennan retorted.

Brennan grinned, peaking at Sam’s freckles out of the corner of his eye.

“Gotten too old,” Brennan laughed feigning old age and sore muscles. “Have to settle for softball now. So, what’s with the license plate?”

“I work in LA. Film editor. Loved the irony of “HOLYWD” on a Georgia plate. What about you? Do you sit around selling vegetables and flirting with pretty girls all day?” Sam looked up and him and smirked.

“Uh huh, so you think that I think your pretty, huh?” Brennan caught Sam blushing and looked at his watch. “No, but that reminds me of something I need to do. Want to come see what keeps me busy most days?”

Brennan jumped off the tailgate and grabbed her hand. “Yeah, but you’ve already met my mother. That’s gotta mean something!”

Sam’s took his hand and followed him, her heart warming in her chest.

Brennan escorted Sam to the passenger door and held it open while she climbed inside. In just a few minutes they were cruising down the county roads on the outskirts of town, music playing softly from the radio, a warm wind blowing through the cab. They rode in silence, while Brennan daydreamed; occasionally looking to his right to make sure Sam was really there.

After ten minutes, Brennan came up on an old brick building, slowed down, and turned in the drive. The side of the building read “Riverview Animal Hospital.”

“I remember this place,” Sam said. “It’s been years, but I’ve been here before. Do you work here?”

“Guilty as charged,” Brennan replied. “Grew up here, left for vet school, and then came back when Dr. Brown retired. Been the primary doc here for the last five years.”

Brennan walked with Sam to the door, unlocked it and stepped back for her to enter first. Just then, 60 pounds of pure motion came bolting through the door, jumping on Sam and knocking her to the ground. There was a loud bark, followed by the slobbery sound of dog saliva on Sam’s face.

“Well, I guess that answers my question,” Brennan said laughing and holding his gut. “Max is feeling better!”

“So this is your patient,” Sam replied, trying to breathe while laughing uncontrollably. “Hi, Max,” she said sitting up and patting the dog’s head. “What a good boy.”

“Sorry about that,” Brennan said, grabbing her arm and pulling her up. He wasn’t sure which he noticed first, her hair wet and tangled from the encounter with Max, or the dirty paw prints all over her white pants.  It didn’t matter; they were both adorable. As she stood next to him, their bodies touching, he could feel the connection.  He was aware of his delight as he guided her into the clinic.

“Oh my gosh,” Sam shrieked. “Looks like Max has been having fun.”

Brennan looked around the reception area to see all kinds of paper shredded and torn up, strewn across the floor. “What has he done now?” he muttered.

Brennan scanned the room again, this time captured by Sam. He didn’t have the heart to tell her that she looked a little worse for wear since meeting him and Max. Brennan stepped through the door and walked back further into the clinic. “Yep” he yelled to Sam from the back. “Looks like he got his kennel open. What a mess.”

“No problem,” Sam replied. “I’ll help you pick things up.”

The two set to work picking up the paper and straightening up the clinic. After taking Max out, feeding him, and locking him securely back into his cage, they started to leave.

Sam looked at her watch and gasped, “Oh no, I totally lost track of time. I’ve got to meet my sisters for dinner.  Can you take me back to my car?”

“Are you going straight there?” Brennan asked with his lop-sided grin. “Cus if so, you might want to take a look in my bathroom mirror first.” He walked her back through the reception area and motioned toward an open door.

Sam walked in, took one look at herself, and gasped. “Why didn’t you tell me I look like this?” she said, stepping back into the hallway.

“Because, believe it or not, I think you look adorable,” Brennan answered, walking up behind her and placing his hands on her shoulders. He took one look at her green eyes in the mirror and bent down and kissed her on the top of her head. It was tender and affectionate, the perfect expression of the way he felt in the moment. She was getting to him in a way he had never experienced before. When he lifted his head, he looked into her eyes and held her gaze.

Still mesmerized by her, he reached around to turn off the bathroom light. He grabbed her by the waist and started to escort her through the building. “But, I will take you to your car so you can run home and change.”

“Not so fast, cowboy,” Sam teased. “A guy can’t just give a girl a kiss and send her off to meet her sisters without knowing her name.”

“Well he can if he’s just going to call her Hollywood,” Brennan shot back with a wicked grin. And that was it. With one last glance he realized he was a goner, totally smitten. As they walked to his truck he noticed the empty bag of pork rinds on the floorboard. “Could this be love?” he wondered. He sure hoped so, he thought, and a huge smile spread across his face as he sent a quick prayer skyward thanking God for good directions, turnip greens, and a little sweet tea.