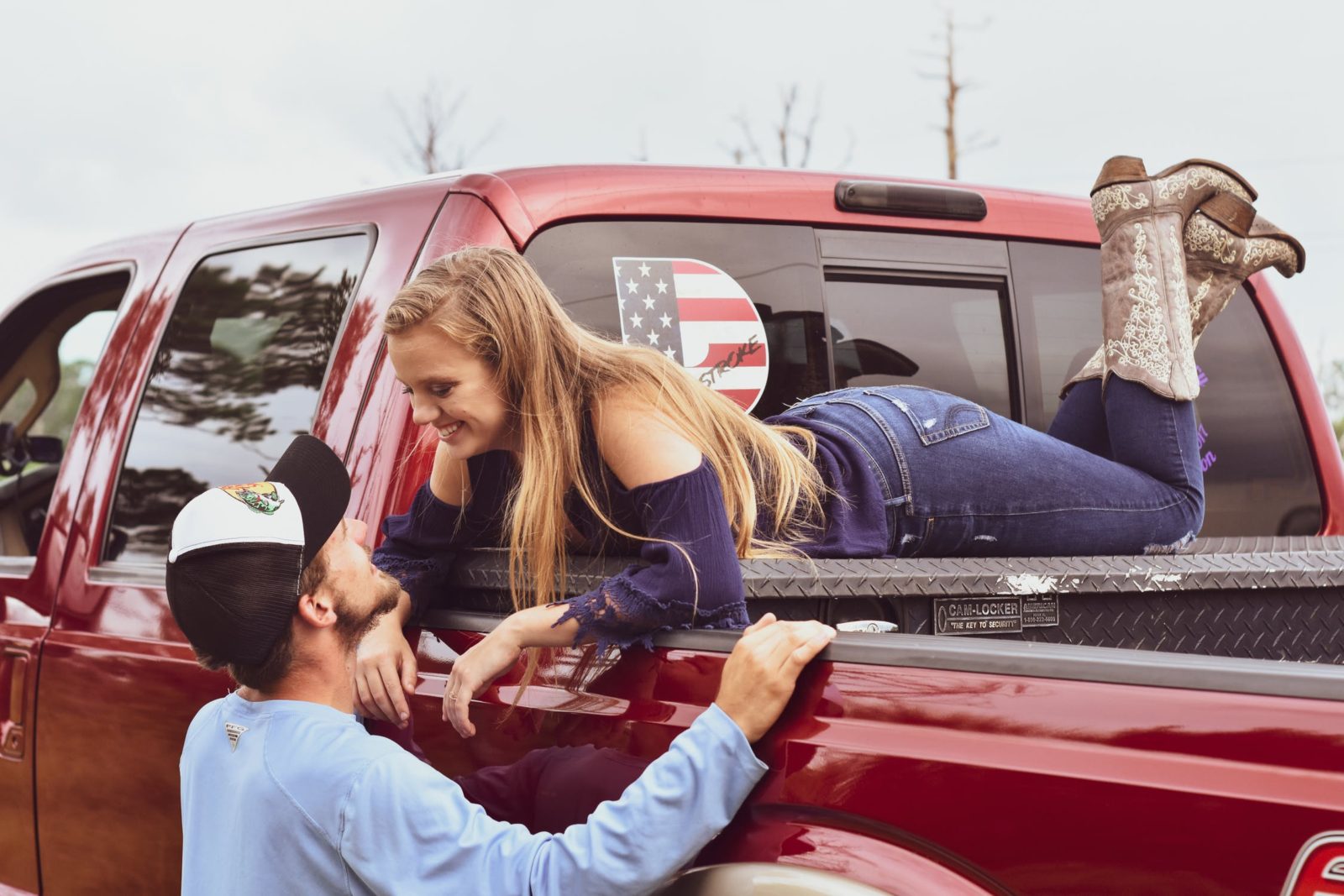 Brennan opened one eye slowly, trying to focus on the alarm clock. What time was it? His body was heavy and weak and his mind was struggling to wake-up. What day was it again and why was he so tired? Slowly his brain kicked in and he remembered – it was Saturday and he’d spent last night on call at the vet clinic. Thanks to a very cute, but sick golden lab named “Max,” he hadn’t gotten much sleep.

Brennan rolled out of bed, rubbed his eyes and walked to the kitchen to start the coffee. After a quick shower, he ran a comb through his short, wavy, brown hair and added a little gel. Why – he didn’t know. The sun would have him hot and sweaty in no time. He dressed in his usual jeans and white t-shirt and slid on his boots. After a bowl of cereal, a mug of Joe, and a look at his hometown newspaper, he was good to go. All traces of the rough night before were gone with the caffeine and Georgia sunlight.

Walking outside, Brennan hopped in his trusty Ford F-150 and set out for mama and daddy’s. His brown eyes were bright under the bill of his baseball cap. It was Saturday, after all, his day to take the family produce to the farmer’s market. It was the least he could do for his parents after all they’d done to put him through vet school.  He always knew that farming wasn’t the career for him; but he also knew he was born for country life. No big cities, just blue skies, open road, his family, and lots of homegrown vegetables.

Mama was pulling out as Brennan pulled in the drive.

“Hey Mama, headed to work?” He already knew the answer. She always worked Saturdays at the old general store near the highway. Once upon a time it was a store just for the locals, but since construction started on the new interstate, the place was full of tourists – especially on the weekends.

“Sure am. Stop by later for some sweet tea and peach pie,” she said as she waved and drove down the gravel driveway.

He’d see about that.  There were two things he could hardly say no to – his mama’s sweet tea and peach pie.

Sam rolled down the windows of her VW bug and tried to enjoy the moment. Her strawberry blonde hair swirled in the breeze and flew up in her face. She instinctively reached up to push it out of the way and adjust her white Coach sunglasses. Her silver bracelets rattled and sparkled in the sunlight. Lauren Alaina blared from the radio singing “Georgia Peaches.” How fitting Sam thought. God it felt good to be home – back in Georgia and back in her car, actually driving down the highway, not stuck in a cab in traffic.

There were so many things about LA that Sam didn’t like – the noise, the buildings so close together, the traffic, the demands of work. After living there for five years, she definitely needed a break. She found it hard to believe she hadn’t left the city for a day, much less a vacation.  No chance to date, see her parents, or hang out with her sisters. It had been way too long. A lone tear fell from her emerald green eyes and rolled down her cheek.

But no guilt or shame now. She was home – home for a nice long break from her job as a film editor. Gosh it felt good. And here she was with the whole day to explore – no deadlines, no agenda, just eight hours in front of her until dinner with her sisters tonight. “What did she want to do?” she thought as she leaned her head against the headrest and took in the sights and sounds around her.

“Hey dad!” Brennan hollered as he exited his truck. “I’m here to load up.”

“Hey, son” his dad responded. “Over here. Got lots of peaches, onions, okra, watermelon, and even some turnips to sell today. I hope it’s busy.”

“Saturdays always are, especially during the peach festival.”

“Well good luck and take these,” his dad winked and threw him a bag of pork rinds.

“Thanks,” Brennan responded with a grin. Kind of corny, but over the years he and his dad had shared many laughs and several heart to hearts over pork rinds. There had been his insecurity over asking out his first date, his indecision about who to invite to prom, his embarrassment at spilling spaghetti all over his shirt while out to eat with his girlfriend’s parents. Or most recently, his desire at age 30 to find the right woman and settle down.  Over the years there had been many dates, but no one who measured up to his expectations. And his dad was always there to listen, usually over a bag of pork rinds.

Still reminiscing, Brennan set the pork rinds in his front seat and carefully loaded the vegetables into the bed of his truck. In less than 30 minutes he was ready to go. Waving goodbye to his dad, he set out for the farmer’s market, wondering what the day might hold.

It really wasn’t a hard decision Sam thought; it was the peach festival after all. It was one of the things she missed most about leaving Georgia. She pulled off the highway and headed into the town square. As she gazed out her window, it was just as she remembered. The brightly colored balloons, the sound of people talking cheerfully, the smell of funnel cakes. She’d have to get one of those before she left – with peaches and whipped cream, of course.

After driving the back streets, Sam finally found a place to park and ventured into the crowds at the festival. She walked alone by herself, enjoying the energy and having fun watching the people. It was so much different than driving in LA or walking down Rodeo Drive. In Georgia, people stopped to say hi and ask if she was having fun. The store owners were pleasant and went out of their way to assist her. It was so much friendlier and more personable here.

After several hours of walking, shopping, and practically inhaling her funnel cake, Sam sat down on a park bench.  For the first time in months, maybe years, she felt carefree. Her shoulders weren’t tense, her back was free of knots, and her normal headache was absent.  She took a deep breath, relishing the feeling of being content for the first time in a long time. “I need more of this” she thought to herself.

It had proven to be an interesting morning, Brennan thought. People coming and going, buying fruit and vegetables on their way to the peach festival.  Brennan chuckled as he thought about some of his customers – people he’d known his whole life. Mrs. Baker had stopped by to get her usual onions and turnips for tomorrow’s stew. Mr. Dunlop needed peaches for the Mrs., and Cindy Cooper picked up some watermelon for her daughter’s birthday party. Then there was his friend Dale. He’d stopped working to catch up with his friend and re-live Thursday’s softball game. They were so into the play by play that neither of them noticed Dale’s dog, Butch, had jumped into Brennan’s truck and gotten a hold of the onions.  From the looks and smell of it, Dale was going to have a fun afternoon.

Sitting on the tailgate of his truck, Brennan was still smiling, imagining Dale’s perfumed ride home, when he noticed an unfamiliar car coming up the road. “I wonder who this could be,” he thought. It wasn’t very often he saw a VW bug around these parts, especially a convertible. Must be a tourist. Finishing his pork rind, he hopped off the truck, getting ready to apologize that all he had left were a few turnip greens, when he saw her.  Something about her took his breath away. She had the prettiest strawberry blonde hair, tossed about by the wind. As she stepped out of the car, she pulled off her sunglasses to reveal a few freckles dotting her face and the prettiest green eyes he had ever seen.

He stood speechless for a moment, then finally mustered “How can I help you ma’am?”

“Hi,” she replied, looking a little confused. “I’ve been at the peach festival and I think I’m lost. I haven’t been here in years and they seem to have moved the interstate.”

“Oh, the interstate,” Brennan mumbled, feeling like a love-struck idiot. “Yep, they moved it indeed.”

“I don’t suppose you could tell me where it is?” Sam teased, looking up with her long lashes.

“I guess I could,” he replied coyly. “Are you sure I can’t interest you in some turnip greens first?”

“Not a big fan of turnip greens, but I am thirsty. Got anything to drink?” She winked.

“Well, not here, but I know where you can get some of the best sweet tea in the county,” he said.

“Just up yonder,” Brennan pointed, “past the caution light. There’s a country store with an old Coke sign.  You can’t miss it. Just stop and ask Miss Belle for some of her sweet tea.”

“Thanks,” she said. “And the interstate?”

“Well, that’s easy,” he replied with all the charm and southern accent he could muster. “A left will take you to the interstate, but a right will bring you right back here to me.”

“Is that so,” she said, trying to keep a straight face. “We’ll just have to see about that.” A grin began building on her face as she turned, hopped back in her car, and headed out.

Brennan stood there with his hands on his hips, a lop-sided grin forming on his face, as he watched her drive off in a cloud of dust. He rubbed his forehead, shooting himself for not asking her name and realizing he probably looked like a total redneck. For a second he contemplated trying to catch her, but thought the better of it. It could have been love, he thought, but he’d just have to settle for the memory of her scattered freckles and emerald green eyes…