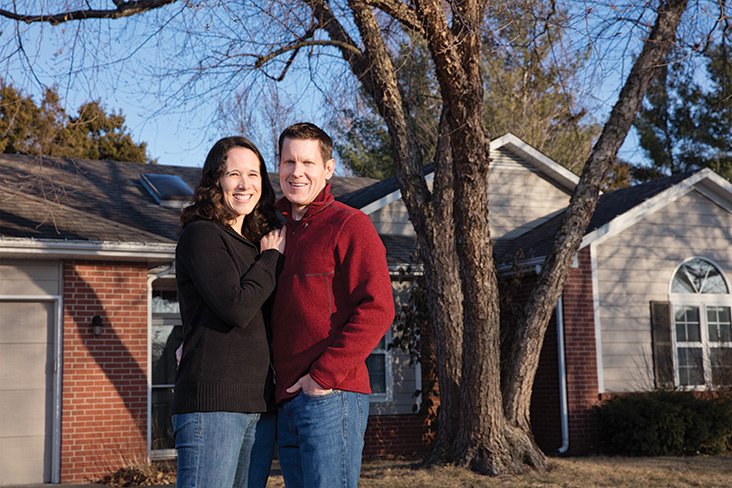 Kimberly Earnest ran faster than any other woman in last summer’s Show-Me State Games triathlon and hasn’t blown a financial budget in 116 months and counting.

Kimberly is a role model for those who strive to keep the excess off their waistline and the surplus in their bank account. She is a dedicated fitness practitioner who loves to cheer others on and help them learn to become better, stronger athletes. She is also a financial connoisseur who enjoys teaching people about personal finance management, simpler living, and the peace those things can bring to one’s life.

For the Love of the Run
Six days a week, Kimberly wakes up at dawn to run, swim, or bike. On two of those mornings, she also lifts weights. Some days she adds another bike ride or a workout in the evening.

“I’ve run in 10 to 15 races a year for the last 22 years,” Kimberly says. Her passion for physical health took an early start. As a sophomore in high school, she started running year-round, regularly, on her own.

“My first race was a five-mile St. Patrick’s Day run. I guess you could say I got the racing bug at that point and discovered road races were really fun,“ Kimberly shares, “so every summer I ran a bunch of 5Ks and 10Ks and developed a passion for healthy living.”

That passion pushed Kimberly to run two triathlons and four marathons while earning a degree in health management at Southeast Missouri State University. She trained for each race without a mentor or coach. “My freshman year of college, I trained on my own for my first triathlon,” she says. “I had no idea what I was doing, had never swam laps before in my life, had no biking experience as an adult.”

She must have gotten a handle on it: She is currently ranked as a USA Triathlon All American.

Since 2004, Kimberly has also participated in the Columbia Multisport Club. “People in the club have mentored me, taught me how to be a better athlete, and, now that we’re older and seeing new and younger people in the sport, we’re here to mentor and help them.”

Working out with the community has also been inspiring to Kimberly. Seeing those who are 10 and 20 years older than her putting up fast times pushes Kimberly further in her training. Her husband is one of those sources of inspiration.

“Because Brad is several years older than me,” she says, “I look up to him because I see he is still doing this as an older runner who can still be active, race hard, and have fun. I can trust that this doesn’t have to end at a certain age.”

Bike Rides and Balanced Budgets
In addition to participating in the local fitness scene, Kimberly and Brad are committed to building a financially healthier community. Twice a year, the couple presents workshops on budgeting. They also spend 18 weeks a year at Columbia’s Woodcrest Chapel leading Dave Ramsey’s Financial Peace University courses, teaching others how to make better financial decisions and meet their financial goals. 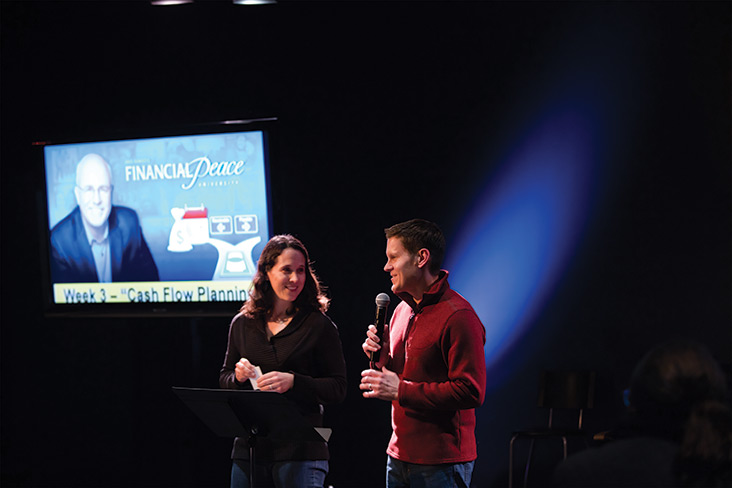 Exercise is one thing, but finances are another, and Kimberly believes no one should run a financial race without following a guide.

“Your budget has to be your plan, something that is going to guide you, or you won’t make progress,” she says. Kimberly believes personal finance has more to do with having a budget than anything else.

“I think people get scared of the word ‘budget’ and believe they can’t stay committed to one,” she continues. “A budget is simply a plan, and it’s a plan you get to write. And you can change the plan. It’s being intentional with your money. Through the vessel of a budget and having little or no debt, you can talk about your dreams and your goals and consider what you want to accomplish.”

While some might say there’s no correlation between the gym and a financial plan, Kimberly argues that one set of skills applies to both areas. “The discipline muscle I developed and strengthened over the years during physical training and conditioning definitely helped when we were paying off debt,” she says. “Similar to training for a race, you focus on the goal and what you need to do to accomplish it.”

Life Integrated
Kimberly now gets to do professionally what she has always done as a volunteer. As part of the Wellness Team at Veterans United, serving as their financial fitness coordinator, she thrives when employees become better versions of themselves by discovering and developing a practice of being more intentional with their finances and more active with their bodies.

Kimberly finds it fulfilling to connect with people, invest in their lives, and encourage those who are willing to learn to live healthy, active, balanced, simple, debt-free, and peace-filled lives. “I want to be a positive, good mentor, just as others have mentored me,” she shares.

For Kimberly, exercise and financial freedom go hand in hand with her desires for social connectivity, leisure time, and feeling accomplished. While we might hear her talk about keeping things balanced in life, what we actually see is not balance, but integration: We see how well Kimberly integrates aspects of her work, family, faith, and community into her daily routine without losing herself or neglecting those she cares for and loves.

It helps to have a partner who shares her passion for strong health and finances. Kimberly met Brad in a 5 a.m. Tuesday and Thursday runners’ group, and their first dates consisted of early morning workouts. (Their courtship via exercise hasn’t stopped—Kimberly and Brad work out together every week.) Kimberly’s financial fitness and discipline played a part in the couple embracing and employing the seven financial planning steps of Financial Peace University.

When they married in 2008, their only debt was a mortgage, which allowed them to spend just over two years building an emergency fund, planning for retirement, and saving for college tuition for their kids.

At the beginning of 2011, with nine years remaining on their mortgage, Brad and Kimberly realized they could pay off their note much quicker with some focus and sacrifice. Two years later, after living on way less than they earned in order to put nearly every dollar toward their mortgage, they succeeded in paying off their home.

So whether it’s fitness or finances, Kimberly Earnest will run often. She will run long. And she will never outrun the joy of being a disciplined athlete. “I love lining up at the starting line and going as hard as I can and seeing what I can do to the best of my ability,” she says.