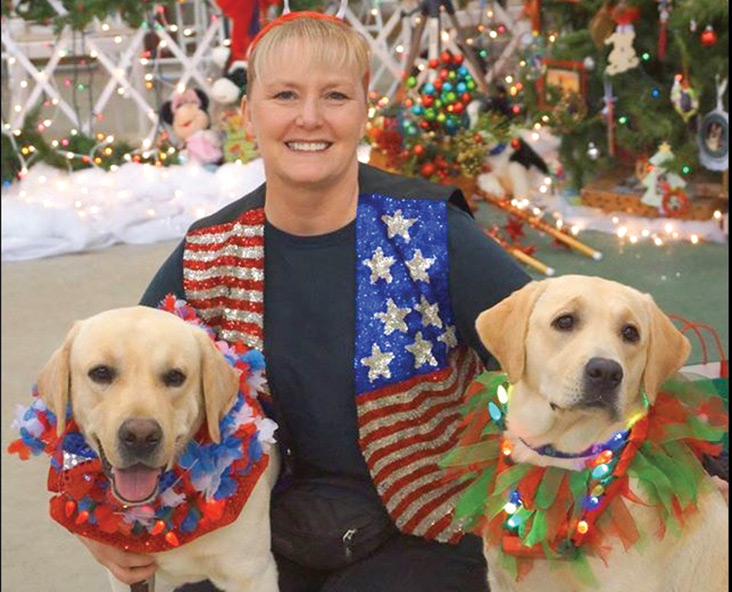 Animals meet emotional and medical needs for their owners.

When Denise Skouby has to send one of her dogs to a new house, it’s painful, but she knows it’s for a good reason.

Denise breeds and trains puppies in Columbia through her business, McGill Pointe Labradors. Some of her dogs will go on to become service animals around the country and perform life-saving jobs for their owners, like sensing dangerously high blood sugar levels in diabetics or guiding someone who is visually impaired. Getting a service dog is life-changing for someone with a disability.

“That dog is their lifeline,” Denise says. “Without that dog, they can’t go out and they wouldn’t have the independence that that dog gives them. So, you know, that bond is stronger than just a pet. That dog is more important than anything because without it, you’d be nothing.”

Denise starts her dogs off with puppy kindergarten at Ann Gafke’s Teacher’s Pet dog school in Columbia, where the dogs learn how to walk on a leash and avoid distractions at 12 weeks old. It takes months more of training to prepare the dogs to become service animals.

Potential service dogs need to be “bomb-proof” when confronted with new people, smells, and other temptations, Denise says: “When they put that vest on, their behavior has to be perfect. They can’t bark, jump, run, pee — anything that a normal dog might be able to do.”

Very specific regulations in the Americans with Disability Act give service animals — including dogs and miniature horses — the right to enter businesses, restaurants, and other no-pet establishments.

Emotional support animals, a relatively new category of pet, aren’t protected under the ADA, however. Anna Guthrie, a consultant at the Great Plans ADA Center in Columbia, says that can lead to confusion for some businesses and owners. She says the laws applying to emotional support animals are less specific than those that apply to service animals. Emotional support animals provide comfort for an individual through their presence rather than their behavior. They might be prescribed for people with anxiety, depression, autism, or past trauma.

Unlike service animals, emotional support animals don’t have any training requirements to be registered. But for them to enter public spaces that do allow animals, they should be well-behaved.

“It would be like me going up and having a drink with my airline pilot,” she says. “I can’t distract the pilot. That is a life-saving job that dog is doing and you can’t distract it.”