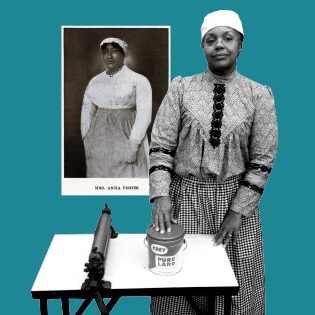 This story appeared in print as part of “From the Ground Up.”
Verna Laboy has been channeling the spirit of Anna Fisher for the past two decades.
Laboy is a health educator with Columbia/Boone County Public Health and Human Services as well as a community activist. Fisher, who lived from 1867 to 1938, was an entrepreneur and the first black woman to own a restaurant and catering business in Columbia.
Laboy played Fisher on the occasion of Fisher’s induction into the Boone County Hall of Fame in the 1990s. In her free time, Laboy presents Fisher’s life story — in Fisher’s voice and dressed entirely in period-specific garb — to groups around Boone County, such as the Mary Paxton Keeley Elementary School fifth-graders she entertained on a Wednesday morning in February.
“I’m the most famous chef to ever live in Boone County,” Laboy-as-Fisher told the students. “There wasn’t a wedding, a ball, a reception of any status in this town that I didn’t have something to do with.”
To inhabit the role of Fisher, Laboy had to do a lot of research — there wasn’t much in the written record. So she would go to the grocery stores and churches in her neighborhood, find the oldest person there, and ask if they knew about Anna Fisher.
The stories she heard were remarkable. Fisher worked from a young age for the prominent Lenoir family to help support her own family. She learned how to cook from the kitchen staff, then she branched out into her own catering business.
Her beaten biscuits and country ham sandwiches were nationally known. Her food won a medal at the St. Louis World’s Fair in 1904. She served President William Howard Taft when he visited the state fair in Sedalia in 1911.
All, Laboy is quick to point out to students, with only a third-grade education.
“They would line up for my biscuits. I perfected what I was passionate about, and no one could do it better,” Laboy-as-Fisher said. “What do you want in your heart? What do you want for yourself? It’s time to dream, and dream big.”
Fisher’s story is also one of segregation. She opened her own fine-dining restaurant on land she owned, Fair Oaks, which served high-class white patrons in Mid-Missouri. Black customers were not permitted to sit in the dining room. They had to take their meals to-go from the back door.
“The spirit of Annie Fisher, her story, is one of overcoming, success, being resilient, rising above. I couldn’t resist telling her story,” Laboy says.
“I do this to keep Annie Fisher alive, the gift of her life alive, to be able to pour that into you today,” she told the class at Keeley. “I plant a seed in your souls today, and I hope something takes root and grows.”