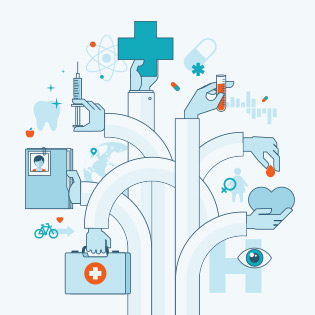 
The long-ago medical television drama “Marcus Welby, M.D.” undoubtedly prompted countless baby boomers to pursue medical careers. But nearly 20 years after Robert Young’s titular character, a kindly old doctor who still made house calls, had finished a successful run, another prime time doctor — from a much more distant time — was inspiring more aspiring physicians.
Bridget Gruender vividly remembers watching “Dr. Quinn, Medicine Woman,” about a physician in the Old West, in the early 1990s. The show was the spark that ignited Gruender’s passion to become a doctor — but not just any doctor.
“I watched Dr. Quinn,” Gruender says. “That’s who I wanted to be when I grew up.” She smiles. “And that’s the kind of practice I have now.”
In July 2016, Gruender opened Liberty Family Medicine, a direct primary care practice absent of insurance companies, price-hiking pharmacies, and other players that continue to stack the cost of health care against consumers. It’s a direct approach Gruender borrowed from her favorite TV doctor, who would traverse the West and use her relationship building skills to do her job outside of a traditional health care system.
“I have no horse and buggy,” Gruender says. “But I’m pretty much Dr. Quinn.”
Direct primary care practices charge patients a monthly, quarterly, or annual fee — consider it a retainer, of sorts — that covers all or most primary care services, or at least provides a significant discount on those services, which can include lab work, consulting, and care coordination.
Another direct primary care clinic, Big Tree Medical Home, opened September 1 of last year. Adam and Jen Wheeler, with the help of Blake Barnes, opened Big Tree at 200 Southampton in a suite shared with Tiger Pediatrics, where both Adam and Barnes also practice, though the two groups aren’t financially affiliated. (Big Tree is also unaffiliated with Jen Wheeler’s other enterprise, the nonprofit City of Refuge.)
The concept of a medical home takes the care coordination a step further by acting as the base for all of a patient’s health care needs, helping them navigate the full health care system when specialty or emergency care is necessary.
The significant similarity between Liberty Family Medicine and Big Tree Medical Home is marked by the absence of a common health care player: insurance companies. Neither practice accepts insurance, but both advise patients to have some form of high-deductible, catastrophic insurance and a health savings account, or HSA, a type of banking product for health care costs, that are compatible with direct primary care in order to meet medical costs not related to membership fees.
“We don’t care that insurance companies can’t figure out what code to use for a text message-based visit,” Adam Wheeler says. “We don’t play with insurance companies anyway.”
In an industry rife with high costs and complex processes, Columbia is producing health care companies founded to provide simpler solutions for patients — but simplicity can be a complicated goal to achieve.

Big Tree, which took its name from the centuries-old bur oak outside of McBaine, is also offering its $59-per-employee plan to employers that are unable to afford commercial health insurance. Adam Wheeler says employers can think of the benefit as a purchase of health care, not health insurance. Big Tree is also fashioning an employee wellness plan as part of its services for small businesses.
Liberty Family Medicine charges monthly fees of $25, $50, $75, or $100, depending on age. There’s also a referral bonus for patients that refer others to the practice, and patients who pay for 12 months at a time can receive one month at no charge. Like Big Tree, Liberty Family Medicine offers access to wholesale prescription drugs and over-the-counter drug prices and dispenses medications in the office.
Big Tree, which promotes itself as “Simply affordable primary care,” embraces modern communication technology to create “highly relational health care” independent of insurers. Technology in traditional physician offices is often a necessary burden — doctors use electronic filing and databases to prove to commercial insurance companies and the Centers for Medicare and Medicaid Services that the care they’re providing is producing good patient outcomes at lower costs.
The alternative to these direct primary care plans is traditional health insurance, which routinely costs hundreds of dollars a month in premiums before any additional costs for medication or other services. Gruender said one Liberty patient was paying $150 a month for a medication that costs just $5 per month from Liberty. “If patients can afford a medication, they are more likely to take it,” she says.
Health care has long been, along with education and insurance, one of the main pillars of Columbia’s economy, which has made it an ideal place for alternative care providers to experiment with new models. Another new player in Columbia is Epoch Men’s Health, which bills itself as “the next evolution in comprehensive health care designed for men,” matching symptoms to appropriate medical treatments, regular screenings, and lifestyle modifications “that return you to a healthier, happier way of life.”
Epoch focuses on “patient care pathways” that include diabetes, wellness (fitness, nutrition, and vitamin deficiencies, for example), prostate health, sexual health, testosterone and hormones, mental health, heart health, sleep disorders, and more.
Adam Cole, Epoch’s national medical director over the for-profit company’s six locations (one in Anchorage, Alaska; one in Columbia; and four in Arkansas) shrugs at Columbia’s apparently high physician-to-patient ratio.
“We identify [men’s health patients] as an underserved population,” Cole said, “especially when it comes to preventative health care and cancer prevention.” 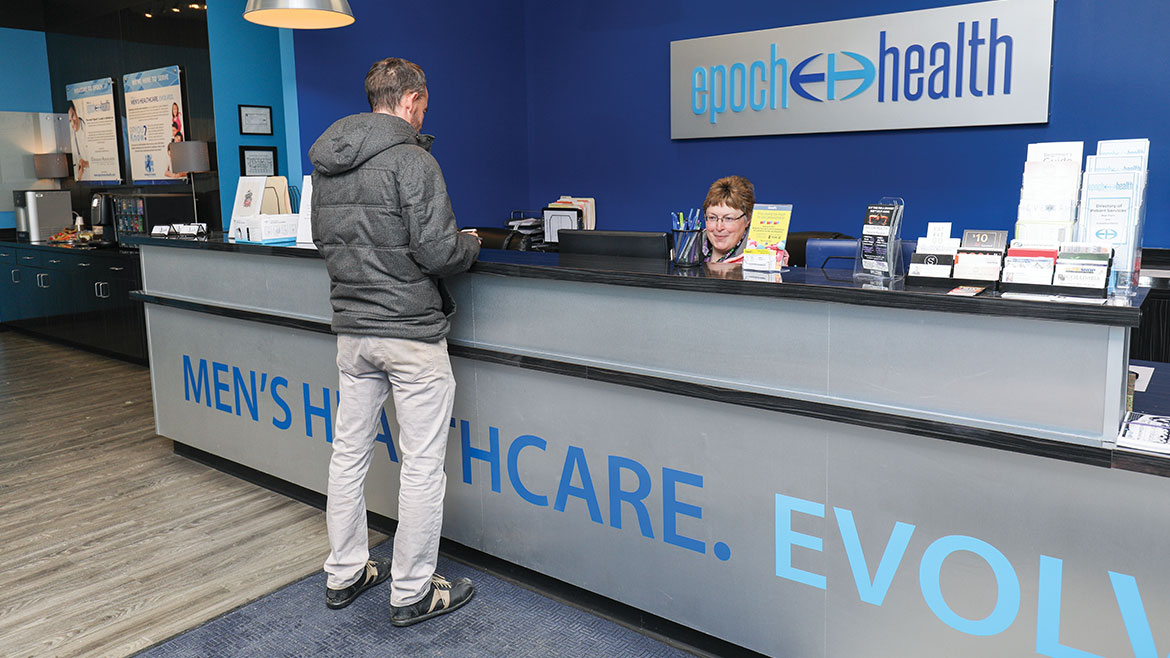 Unlike Liberty or Big Tree, Epoch does accept insurance, but they’re battling some of the major carriers that haven’t yet or won’t credential Epoch’s physicians. That’s a head-scratcher for Cole, who says Epoch’s focus on preventive care should be a plus for insurers.
“It takes very little to prevent disease,” he says. “The money we’re talking about is a drop in the bucket” compared to treating and managing chronic illnesses in a wide range of patients. Cole shakes his head. He says health care in general is built to be “more reactionary, treating something that’s already developed.” He says the much-maligned Affordable Care Act has a plethora of references to preventive medicine, “but there’s not really been any kind of blueprint to achieve that.”
And health care ultimately costs more when preventative care isn’t provided.
Epoch specializes in diagnosing and trying to prevent metabolic problems, such as diabetes and high cholesterol, as well as hormonal deficiencies or imbalances. They also hope their narrow focus can help overcome societal stigmas that deter men from seeking care.
“From a social standpoint, on men, we’re programmed that you’re just supposed to feel like crap as you’re getting older,” Cole says. “It’s setting you up for failure for your quality of life.”

He says women typically have more tailored health care options, from family medicine to obstetrics/gynecology. “Women are so much better at this,” he says, noting that women are statistically more likely to get annual physicals and tend to their health needs. Hormone replacement therapy is standard treatment for many women, yet there’s reluctance among men to seek a boost in testosterone or estrogen, or to figure out why their bodies aren’t making enough testosterone.
“For guys, maybe they got a sports physical in high school, then they don’t see a doctor again until they’re in their mid-40s or if something’s wrong,” Cole says. “It’s okay to reach out and ask for help. It’s been a huge social obstacle.”

On the surface, the proliferation of new models for primary and niche health care in Columbia doesn’t seem to fit with the statistics that show an abundance of physicians in the city. The annual County Health Rankings that the Robert Wood Johnson Foundation produces each spring routinely shows Boone County and Columbia at or near the top of Missouri counties for the number of physicians per resident. Boone County was No. 1 in the 2014 report, which showed that there was roughly one physician for every 900 or so residents in the county.
But those numbers don’t tell a full story; for instance, they don’t reflect access to care or affordability of care. In fact, the same County Health Rankings also show wide disparities along socioeconomic, ethnic and racial, and gender lines.
There’s also another important disclaimer for Columbia, Adam Wheeler says. “Though there is an abundance of physicians, there’s a shortage of primary care physicians,” he says. All but three of Missouri’s 114 counties — Cole, Jackson and Platte counties — are labeled as primary care shortage areas.
“The primary care doctors that exist are, therefore, free to be quite selective,” Adam says. “None of us went into primary care to be wealthy; that’s part of why there’s a primary care shortage.” 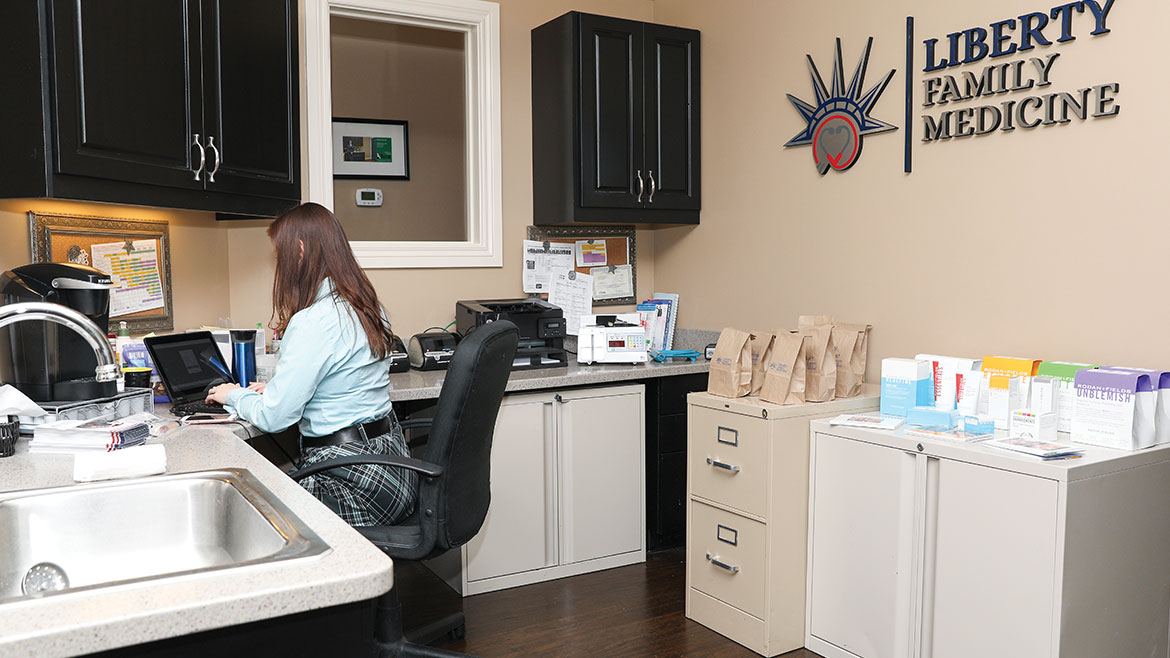 Both Wheeler and Gruender want to be crystal clear about their approach to medicine as a relationship, not a transaction.
“All sorts of perverse incentives pop up if I have to or get to charge you for every little thing,” Wheeler says. “With our model that pays for an ongoing relationship, rather than a visit, it allows us to have a longer conversation with each patient. If I can figure out your sinus infection over email, and you want to just stop by the office and get your antibiotics — sold at cost — then everyone is better off. It’s quicker for me and you, and you miss fewer days of work, so your boss is happy.”
“I got into medicine to take care of people, not paperwork,” Gruender says. “Doctors go into medicine to help people. But the system doesn’t allow you to do that.”
A typical primary care practice will have a physician load of 2,500 to 3,500 patients. Direct primary care limits that patient load to somewhere between 600 and 800. Gruender will spend an hour with patients on their first visit. That’s harder to do if a doctor is required to see 30 to 40 patients a day, Gruender says.
“I’m doing what every doctor wants to be doing,” she says. “I am living the dream, as far as a family medicine doctor is concerned.”
A new flood of regulations has in recent years inundated physicians and hospitals that accept Medicare patients. New Medicare payment regulations contained in the Medicare Access and CHIP Reauthorization Act of 2015, or MACRA, created the Quality Payment Program, or QPP, which uses Advanced Payment Models, or APMs, and the Merit-based Incentive Payment System, or MIPS, to determine the quality of patient care and an increase or decrease in payment to doctors. The impetus for the new rules is Medicare’s seismic shift from a fee-for-service system to a pay-for-performance system, also known as value-based care.
Gruender shakes her head at the new rules.
“MIPS and MACRA. Don’t know. Don’t care,” she says. “It means nothing to me. It means nothing to my patients. It’s more boxes to click.”
Gruender is ready to expand from a one-woman clinic to a larger practice, starting by hiring a nurse. And she’s already receiving resumes from other physicians who want to join her.
Adam Wheeler also has some strong feelings about the government’s new rules that define quality health care and, subsequently, physician reimbursement for Medicare services. After all, he still works within that system in his role with Tiger Pediatrics, which attained the highest level of certification as a National Committee for Quality Assurance-certified Patient-Centered Medical Home.
“I can tell you that, in the year of changes that we made to work on [getting the certification], very few benefited patients,” he says. “Many were merely to help the insurer know that I was already doing something that they wanted me to do.”
The experience reinforced the conclusion he’d already made. “Quality metrics won’t save medicine,” he says. “Relationships will save medicine.”
Gruender concurs. She says the direct primary care approach is new for medicine, but it’s not something that patients needed time to adjust to.
“This is what patients want,” she says. “They want a doctor that takes the time and gets to know what’s going on. That’s what I do.”