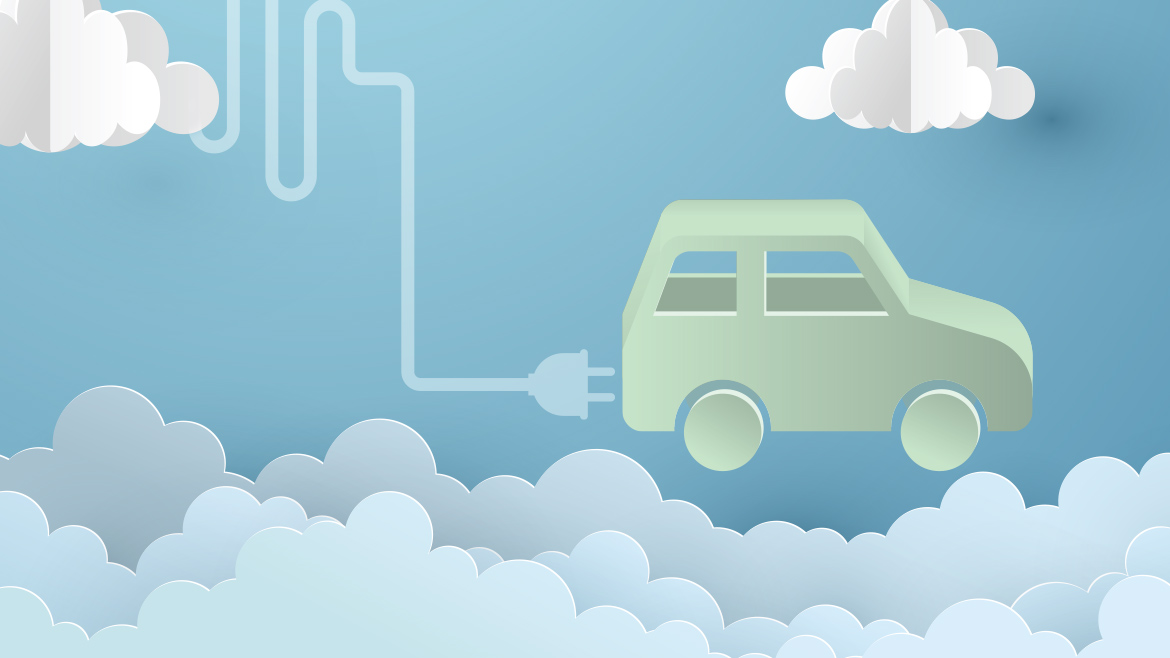 Nothing jolts us back to reality quite like the low-fuel light on the dashboard, when heart rate inversely reflects the gas gauge plummeting towards empty. Easy now. You can travel another 35 or 40 miles, and there are at least two exits between here and stranded-on-the-side-of-the-road. Deep breath.

Now imagine replacing your gas problems with battery problems — there isn’t necessarily a charging station at one of the next two exits. For consumers interested in driving an electric vehicle, the challenges are certainly different. Cars running on electricity rather than gasoline have become a more realistic option for drivers in recent years. Some people do it for the environment; some do it for long-term savings; some just do it for novelty. Time will tell whether EVs become commonplace, but it will depend on a number of factors, including price and the all-important charging stations.

“Take the fuel out of it and how comfortable would you be trusting your battery life?” asks Brian Neuner, director of development for Machens Automotive Group. In all likelihood, the motorist who drives an electric vehicle has already learned to plan well in advance for long trips, knowing exactly where — and the list is short — electric vehicle charging stations are located.

“What is the life of your battery?” Smith asks. “Are there charging stations along the way?”

Neither Neuner nor Smith are EV naysayers. To the contrary. In fact, Smith expects the demand for EVs to increase as the technology is further refined, more options become available, and charging stations become more common.

And stay tuned for possible progress on the charging stations front. Utility giant Ameren wants to build charging stations along the I-70 corridor from St. Louis to Boonville. That plan is on hold right now, after the Missouri Public Service Commission rebuffed Ameren’s request to include charging station costs in its utility rates this spring. Ameren contends  (and recent research provides strong support) that there are too few EVs in operation to persuade private investors to create the charging station infrastructure necessary for widespread EV use.

A number of similar requests from utilities to regulators throughout the Midwest have so far been unsuccessful, although public utility authorities in California made a U-turn and now support rate-payer funded EV infrastructure improvements — which apparently has spurred private development too.

Like most transportation innovations, EV technology is already an important part of public transportation and other government uses. The City of Columbia has a high comfort level with electric vehicles, and other parts of their fleet of cars, trucks, and buses run on compressed natural gas. Drew Brooks, the city’s transit and parking manager, says Columbia has a sizeable fleet of vehicles running on “alternative fuel,” meaning CNG or electricity, with a goal of replacing at least half of its 28 diesel or CNG public transit buses with electric buses. “We’ll be getting close to that [goal] by the middle of next year,” Brooks says.

The transition is well underway, he says. The city purchased its first electric bus in 2015 and put eight more in service in March. The cost of a 40-foot diesel or CNG bus is around $500,000; an electric bus of the same size costs between $750,000 and $800,000. A 30-foot electric model has a price tag of around $450,000. The city uses lease-to-own funding for the buses that comes from a mix of federal and local money, Brooks says.

The higher price tag is offset by lower fuel costs and lower maintenance expenses. For instance, the typical cost of a 12,000-mile service for a diesel or CNG bus is about $1,200. Compare that to $300 for an electric bus.

From a cost-comparative standpoint, is it a positive net?

The city is also planning to put the electric buses on individual meters in the next six months or so “so we can do a better job of tracking what our electricity costs are,” he says.

The goal to phase out diesel-fueled buses is a direct response to new diesel emission standards established in 2010. The short-distance, stopping-and-starting nature of public transit makes it difficult for diesel buses to generate the kind of speed needed to achieve better emissions, Brooks says: “Nationwide, transit buses are really struggling” to meet the 2010 emissions rules.

Columbia’s electric buses have 12-year warranties on the batteries, but ongoing testing indicates that “we ought to be able to get close to 18 years out of them,” Brooks says.

Electric vehicles and hybrids made up about one percent of the 205,000 vehicles sold in Missouri in 2016, Smith says; on a national scale, consumers purchased around 575,000 electric vehicles in 2016, with roughly half of those purchases made in California.

So how does a gallon of fuel compare to . . . a gallon of electricity? Actually, there’s an app for that. The government calls it an “eGallon,” and the Department of Energy made a website that shows the e-power equivalent of a gallon of gas for different parts of the country. In Missouri, the price of gas averaged $2.39 a gallon. The equivalent cost for electricity — an eGallon — was $1.17. From that comparison, it costs about half as much to drive an EV.

“It’s kind of like cell towers,” Neuner says. “The more you see, the better coverage you’re going to get.”

Despite a dearth of public charging stations — which have fees, of course — EVs make good sense for in-city driving or short commutes, Neuner says. A Jeff City-to-Columbia commute is certainly within that realm. There are other issues to consider — for car-poolers, the size of most electric cars can get a little cramped, though there are a few hybrid SUVs you can look at.

“Would a Nissan Leaf work for a family of six?” Neuner asks, noting the five-passenger seating capacity of the Leaf, which lists for around $29,000. A similar-size fuel-combustion Nissan Altima, “fully-loaded,” will come in a similar price range, Neuner says, while a new EV Ford Focus will also come in at around $29,000. You’ll also factor in specialized maintenance, since the majority of mechanics working today are still a little green when it comes to electric cars (pun intended).

Smith sees the demand for EVs increasing, which should have a proportionate effect on price. “Right now, price is prohibitive for widespread use. Price and demand are the driving factors.”

In 2014, consumers had about 15 options for EVs. That number, among the manufacturers that do business in Missouri, is now about 30, Smith says. GM will have 20 options by early 2020.

There’s some debate stemming from the tax difference between an “eGallon” and a gallon of regular fuel. Each gallon of gas includes a fuel tax, which goes to the Missouri Department of Transportation’s road and bridge budget. EV users don’t contribute to that tax, though they pay an alternative fuel fee of $75 as part of the vehicle licensing and registration process. Just another wrinkle to address.

Smith says auto dealers are already meeting the needs of customers looking to switch to EVs. The trend for future sales in the automobile industry requires an all-eyes-on-Asia perspective, and right now, China is a significant consumer of EVs, (followed by Europe, the United States — and California.)

And it’s still too early to tell what effect federal tax reform legislation might have on the EV market. Legislation proposed as of this writing would repeal the electric-vehicle tax credit of $7,500. In the days after the legislation was revealed, Tesla’s shares dropped almost 9 percent.

So what about the “chicken and egg situation” of putting more EVs on the road and more charging stations along the way to give those EVs a place to “fuel up?”

Pat Justis, manager of energy efficiency and renewable for Ameren, expects to see more EVs out there. Auto makers are especially engaged in the EV market, Justis says, unlike past efforts to shift away from fuel-powered vehicles. But . . .

“There are not enough cars [on the road] to merit investing in an infrastructure system of charging stations,” Justis says, adding that Ameren is taking a “forward-thinking” approach “to be able to help customers adopt this technology.”

The Public Service Commission order last spring didn’t prohibit Ameren from building the EVCS network, but it didn’t allow Ameren to include the capital outlay and operation costs in its rate structure, as it would for a power plant or grid improvements. Ameren officials insist that regulatory approval is needed.

“We still feel like this is important,” Justis says. “We’re still identifying other ways to achieve getting long-distance, fast-charging options to the public.” Justis says Ameren will “most likely” have another request to the PSC to allow charging rate-payers for the EVCS project, “but we don’t have a timeline on it yet.”

Former state Sen. Scott Rupp, now a Missouri Public Service Commission commissioner, cast the lone voice of dissent
on the PSC’s rejection of Ameren’s first request. He has also blogged about “range anxiety” and the need to establish a charging station infrastructure.

“In Missouri, when you get out of the urban areas of St. Louis and Kansas City, there are very long gaps between charging stations (if they exist at all), increasing the range anxiety of EV drivers,” Rupp wrote on his website,
simplifyingenergy.com.

Rupp echoed the attitudes of utility regulators on the west coast, who have pointed out that with so little incentive to alleviate range anxiety — meaning long-range EV travel is challenging, if not impossible — private investment won’t be persuaded to help create an infrastructure that would, in turn, help generate additional EV drivers. Rupp was critical of the PSC’s order, adding that “our actions as a PSC will not encourage nor support EV adoption.”

“Not regulating EVCSs owned by electric corporations will stifle the development of the EV market in Missouri and consequently the EVCS market as well,” he wrote.

It’s easy to see how far electric vehicles have come in the state in the last decade — they’re no longer a quirky option for only a select few. Still, before widespread adoption happens, EVs and electricity infrastructure have some growing up to do.