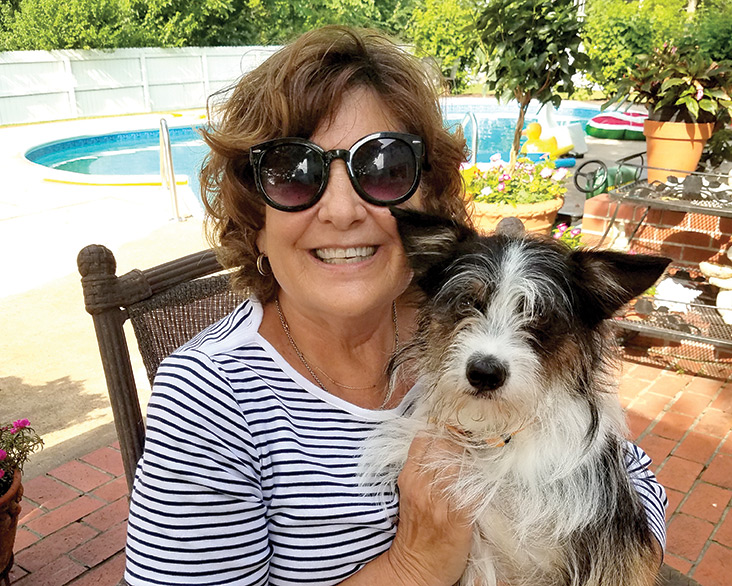 At Home with Purpose

In May, when Dan and Judi Schoonover decided it was time to add a furry friend to their family, they had no idea they would find such a perfect fit through Puppies for Parole at the Algoa Correctional Center, a program in which inmates care for and train dogs.

“It just enthralls people to learn about Rummy’s story,” says Judi. “I love a good story, history, how you met. Rummy’s got a great story and history.” Rummy, whose name was Byron prior to adoption, lived in the his trainer’s cell from February to April to undergo training.

“We like to say that Puppies for Parole is a win-win-win situation. All who are involved win: the dogs, shelters, community, offenders, and staff,” says Cyndi Prudden, Puppies for Parole coordinator. “We work with shelters or rescue organizations that are located near our correctional facilities. Dogs that come to us are often deemed unadoptable. Through P4P, dogs are finding love and attention. They learn to trust again and to socialize with humans and other dogs. In some cases, they are literally being saved, since they may have been slated for euthanasia.”

The Schoonovers have always been fond of rescue dogs. “Our dog was 17 and died in March,” says Judi. “We really wanted another dog and knew we wanted a wire-haired dog who wouldn’t shed. Our daughter-in-law found Puppies for Parole, and our family started watching to see when a good fit might come on the list. Rummy’s just perfect.”

Rummy has never had an accident in the house and has a sweet and content disposition. He is kennel-trained, well-behaved (though he does love to chew up paperback books), and also knows many tricks, like sit and shake. “We have a really big backyard — he’s so playful and loves to fetch,” Judi says. She adds that, as they near retirement age, his 24-pound stature is the perfect size. “We have small grandchildren and you never want to worry about them with pets. With Rummy, we’ve never had to worry,” says Judi. “He’s great with our grandkids and they play with him and pick him up. And he gets along with the grand-dogs.”

All of the dogs from the program are trained in basic house rules and socialization, and they must pass the American Kennel Club’s “Canine Good Citizens” test. The dogs are also spayed or neutered and have all their shots. “Trained, well-behaved dogs are more desirable and, as such, are more likely to be adopted. Dogs find their forever homes with loving families,” Cyndi says.

The trainer keeps a journal to track the dog’s progress and to help find the right match with a family. Judi says she finds it special to read Rummy’s journal, and she can tell through the way it was kept how much care and love went into his training.

Puppies for Parole started in 2010 and has expanded to 19 of Missouri’s 21 correctional facilities. Cyndi says that the effect this program has on offenders is astounding. “The dogs bring unconditional love and acceptance to the offenders,” she says. “An offender’s background doesn’t matter to the dogs. They both get a second chance.”

By working with the dogs, training them virtually 24 hours a day, the offenders get an opportunity to engage in restorative justice, Cyndi says, to repay society for the debts their crimes have cost. “In the prisons, we’ve seen this program have a profound effect on the offenders and staff,” she adds. “We believe it increases the safety and security of the prisons. Just the presence of the dogs in the facilities boosts morale for the staff and offenders.”