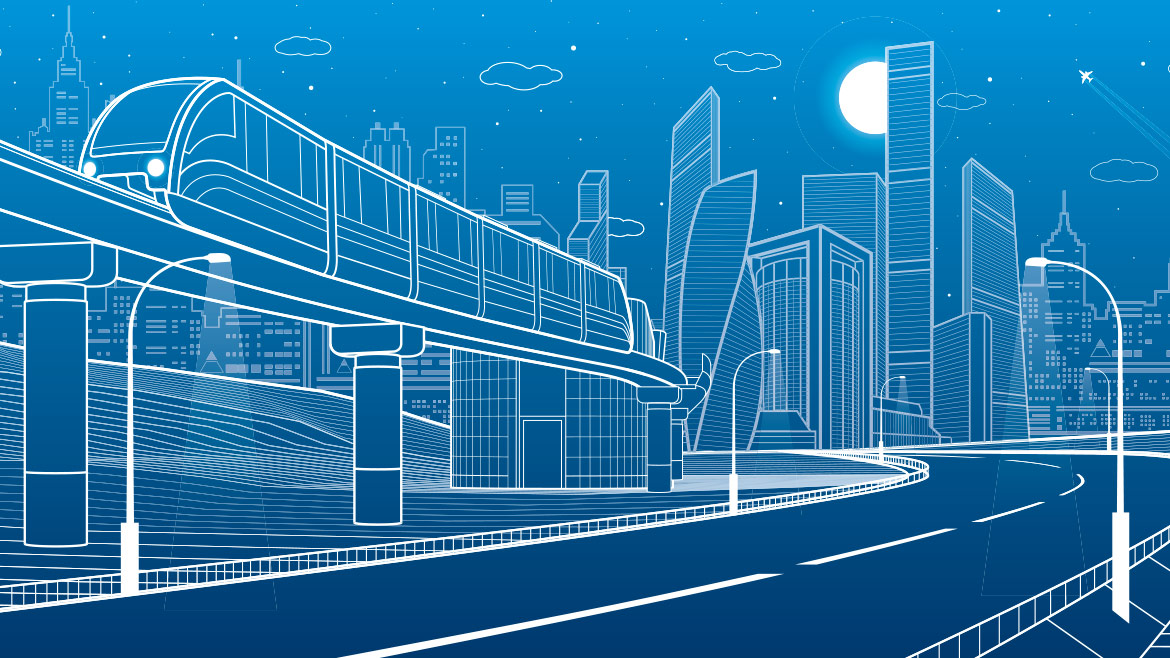 From roll carts to sewer lines, infrastructure issues can incite fervent political passions as much as any social cause. Putting politics aside, we’ve asked city council members and top engineers to weigh in on where things stand regarding some major priorities for Columbia’s infrastructure. Each topic is complex enough to warrant a full book, but here, we’ll just try to provide a big-picture view of what you need to know as a member of the community.

When it comes to best practices for managing Columbia’s bus system, Go COMO, opinions range from shutting it down and replacing it (see Al Germond’s article from our September issue), to Councilman Ian Thomas’s suggestion of doubling or tripling the operating budget to provide greater route availability and frequency to boost ridership. What all camps seem to agree on as a major challenge is the city’s low-density population and sprawling city map. The need for public transit exists, but ridership and revenue have decreased while expenses have climbed.

In the short term, the city has taken action to improve the system’s efficiency. The frequency of buses on a half dozen routes with the lowest ridership have been reduced; one route was eliminated; and a pilot program is being conducted for a “flex zone,” in which a ride can be scheduled to a designated route. But a long-term, permanent solution is still needed for the city’s public transit.

The CPS partnership possibility is on hold indefinitely, barring a change in Missouri law (as Jerry Dowell, of the Columbia Chamber of Commerce, pointed out in his CBT column from last month). But a prospective partnership with MU might be possible right now.

Thomas points to successful models in other college towns such as Lawrence, Kansas; Ames, Iowa; and Gainesville, Florida, where arrangements between the universities and a local bus provider mean the schools pay a negotiated annual fee per student for universal access to public transit. Typically, the rate hovers around $50 to $100 per student, which would mean an additional $1.5M injection into Go COMO’s operating budget, if MU were willing to cough up 50 bucks for each of their 30,000 students for bus fare — which is a cost that would ultimately be passed along to the students.

That 25 percent increase in the operating budget would be great, but Thomas admits it could be a long road to accomplish a deal. “The University of Missouri has historically been opposed to doing that, and I’ve been working on it for years, and I’m still working on it,” he says. “But I do think that they see more benefit now than they used to.” He and Trapp both point to MU’s interest in alternative transportation as the school itself faces shrinking parking capacity and expensive facility maintenance.

For 10 long years, Columbia has been haggling over the placement of new high voltage power lines in south Columbia. Anyone can appreciate the need to maintain and provide additional infrastructure for an increasingly burdened power grid — but no one seems to be too keen on seeing new lines installed over their own heads. Hence the struggle.

Ryan Williams, Assistant Utilities Director for Water and Light, breaks down the expansion into two main needs. First, add an additional 161-kilovolt feed into the Perche Creek substation to ensure that the city can remain compliant with North American Electric Reliability Corporation transmission planning standards. Second, add additional capacity to the distribution system, which is currently below where the city’s distribution engineers feel comfortable guaranteeing delivery of the reliable grid that Columbia Water and Light customers are accustomed to.

In 2013, Option A, a power line route that snakes along several subdivisions in south Columbia, was approved by council. That was proposed to solve both problems with a new substation in south Columbia, referred to as Mill Creek substation, to be located on Peach Court. This plan included building three 161-kilovolt line segments and adding two transformers to create a new load servicing center. The funding for Option A was received from a voter-approved bond issue in April 2015, and the city initially spent $4 million on the project.

But in January 2016, at a second public hearing, Option A lost majority council support due to opposition from homeowners living on or near the path of the transmission route, putting the project on hold. At a council work session in May of the same year, a number of other route options came up: options A, B, and B1 were reviewed, and Options C and D were introduced. Mayor Brian Treece proposed a further option, with the goal of partnering with Ameren to leverage their existing 345-kilovolt right-of-way north of town, which is now known as Option E.

The City began working with Ameren to assess the feasibility of this latest proposal, and in May of 2017, Ameren delivered a study describing how they could support the city with their right-of-way. As of September 18, council approved two engineering service agreements for gathering additional data to help support making a decision between Option A and Option E.

Trapp maintains his position that Option A is the way to go, and says abandoning it for good leaves $4 million on the table: “We had an election to bond fund the project and the bonds passed by a wide majority. . . . Option E would provide connectivity but would not address load growth in the southern part of the city.”

It’s no wonder Fifth Ward Councilman Matt Pitzer says the high voltage power lines issue “probably generates the most interest when it comes up.” Any time changes are made that impact aesthetics or property value, citizens will take note and watch closely.

“I would say both for sanitary sewer and stormwater utilities, the main challenge is ‘out of sight, out of mind’ — it’s in the ground, people flush their toilet, and it goes away,” says Erin Keys, engineering and operations manager for Columbia’s sanitary sewer and stormwater utilities. “That’s all they know, that’s all they want to know. So that’s our biggest challenge — people understanding that we need to maintain these things. And they’re not sexy. It’s like your home. It’s nice to maintain the siding, but when you have to go to replace your sewer lateral and spend 10,000 bucks, it ain’t pretty. You don’t really care to do that because it’s $10,000 you don’t see.”

In the past — the ’70s, ’80s, ’90s, early 2000s — the community’s participation in the cost of extending sewers to growing areas had a positive connotation. “Historically, Columbia has prioritized growth in the sewer system and has underfunded maintenance and replacement,” Trapp says. “The 2013 sewer ballot that I supported put 80 to 85 percent of funds towards maintenance and repair.”

Sewer and stormwater issues often go hand in hand, but it’s important to point out that Columbia has separate systems for each, which is not the case in all communities. What makes it particularly noteworthy is that both systems leak — so when a hard rain hits, stormwater gets into the sanitary system, causing it to overflow and creating not just obvious health issues, but also regulatory concerns.

With that knowledge, the city has made major investments in lining sewer pipes, adding relief sewers, and reducing inflow and infiltration. They also have an initiative to clean or inspect every sewer main every five years, which keeps five trucks busy full-time monitoring the hundreds of miles of sewer pipes in operation.

On the regulatory end, Columbia shares its stormwater permit with MU and Boone County, which has been helpful in consolidating resources and brain power to be innovative, work with (and try to ward off) the Department of Natural Resources and the Environmental Protection Agency, and find solutions that maintain local control in order to avoid mandates from regulatory agencies. There’s a long history that goes with these concerns, so the city’s developing an integrated management plan to stay ahead of any future issues in a financially responsible way.

It’s reasonable to assume that where a person lives, commutes, or frequents would dictate what they might see as priorities when it comes to road projects. A bottleneck or pothole in your daily commute is tough to ignore, and so is some yahoo tearing through your neighborhood at breakneck speed.

The city has around 60 neighborhoods slated for “traffic calming” that have been approved after evaluation. “Every year, we add about five or 10 neighborhoods to the list, but we only knock off about three” says Ian Thomas, who says he gets calls all the time about cars speeding through neighborhoods.

For higher-traffic roads, more roundabouts are on the horizon. “Roundabouts are almost always somewhat controversial, but over time, people have come to realize the safety and traffic flow benefits that roundabouts can deliver,” Pitzer says. “My constituents are eager to see voter-approved improvements move forward to relieve bottlenecks at key intersections, including Forum–Green Meadows, Nifong–Sinclair and Vawter School–Old Mill Creek.”

The city will also be widening a stretch of Nifong to five lanes — while that project might be messy when it’s expected to begin in 2020, alleviating the congestion between Providence and Forum is seen as long overdue. “Everybody is ready for the Nifong project to begin — and to be completed — and they understand it’s something that probably should have happened several years ago,” Pitzer says.

We get it. With so much to know and follow when it comes to council actions, city projects, and issues on the horizon, it’s tough to keep it all straight without some serious time commitment. Being a conscientious citizen takes some work, especially if you’re concerned with the direction government is moving on a particular issue. Hopefully scratching the surface here provides a foundation, but each councilperson and expert we spoke with was more than eager to be helpful in educating the public. Such accessibility is a luxury some communities don’t have, so take full advantage.