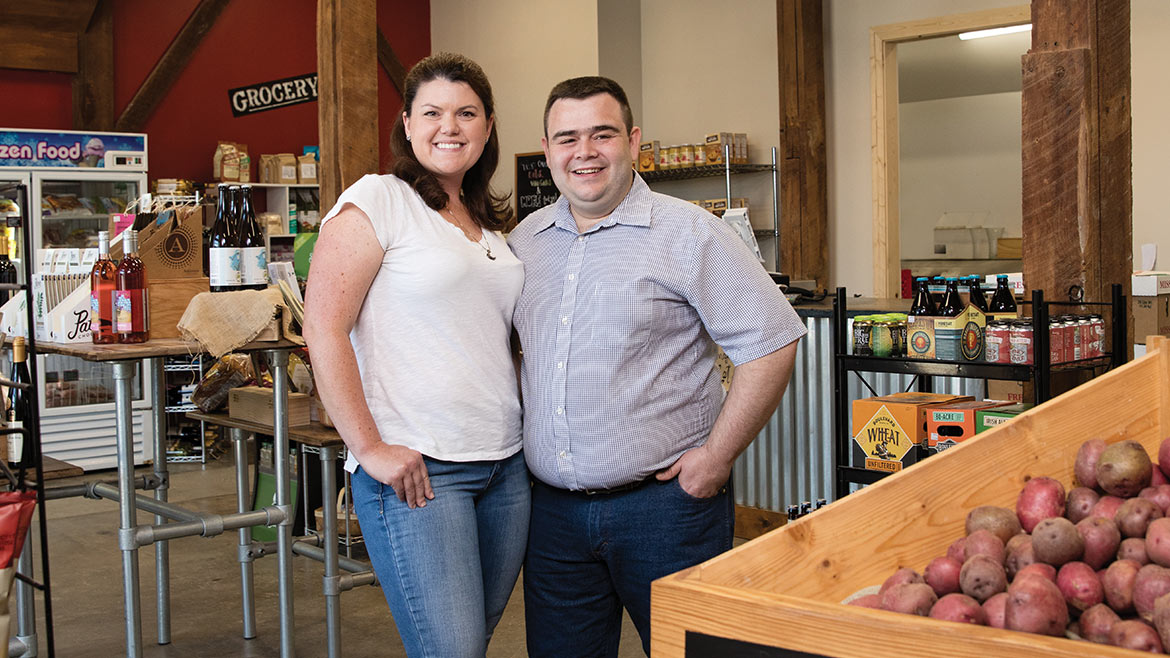 It’s luxurious to dream about having a personal grocery shopper whose mission is to track down only the finest foods for our personal consumption. For those who seek only locally sourced foods, it would be nearly impossible to personally drive to each farm in the surrounding counties, selecting the highest quality choice of each item on our grocery lists every week.

In a sense, though, that’s exactly the service Root Cellar provides through their subscription programs — only without the luxury cost. Owners Chelsea and Jake Davis have developed a cult-like following thanks to  their farming knowledge, relationships, and ability to choose the finest offerings from a broad array of local growers. From produce to pickled items, seafood to salsa, Root Cellar provides a solution for the health-conscious but busy locavore. And now the Root Cellar team is branching out to new customers thanks to their new, bigger, more accessible location.

When Root Cellar first opened in 2001, under original owners Walker Claridge and Kimberly Griffin, it was, as it continues to be, a local retail option for consumers seeking an alternative to the big-box grocery store experience. Claridge and Griffin wanted their store to be like a farmers market, but without the time commitment or weather hindrances — something convenient for buyers and sellers alike. That same idea led the Davises to develop Bounty Boxes, Root Cellar’s personalized grocery packages, making shopping easier and more affordable.

Bounty Boxes include freshly grown seasonal produce along with recipes and sourcing information for $35 per week. There is also a Barnyard Box option, for $40 per week, which is tailored toward an omnivore’s diet, and a Ploughman’s Box, which features a combination of meats, cheeses, and vegetables for the same price as the Bounty Box.

The popularity of the subscriptions has steadily grown — roughly 400 families now participate. Today, Root Cellar is distinguished by the USDA as the only Mid-Missouri registered Food Hub, meaning they source, aggregate, package, market, and sell food for local farmers, streamlining their distribution process. The federal government started tracking those programs across the country in 2014, giving an official name to what Root Cellar had always been doing.

The Davises started Nature Fresh Farms in 2009 to fulfill their dream of being small farmers. They started out raising just a few chickens for meat on leased land, but they’ve since diversified and use the farm as a way to round out the selection at Root Cellar, which they bought in 2011. They also test a variety of crops and production ideas to help farmers in their network improve their practices.

Through a federal grant promoting local food, Root Cellar was able to open a Jefferson City location two years ago. Considering their expansion, coupled with the maintenance of their existing partnerships with local restaurants, the Davises keep pretty busy. When I dropped by unannounced to pick up a few items recently, I asked to say hi to Jake or Chelsea — an employee told me, “Well, they’re driving all over today, picking up produce for the boxes.”

Their outreach involves more than the day to day operations of the business: Root Cellar prides itself in educating consumers. They work with programs like the Capital Region Healthy Schools and Communities program in Jefferson City, where they teach low-income families how to get more fruits and veggies in their diet by giving presentations on seasonal eating. This fall, the Columbia location is launching a series of cooking and eating experiences that will help make seasonal eating and local food even more accessible.

“We recognize that, for our dream of a better food system to grow and flourish, we have to bring new eaters into the tent,” Jake says. “Most people want to eat healthy, great tasting food, but the knowledge of cooking and eating seasonally has been lost over the last couple generations. So, we’re focusing more and more on education. We’re focusing on ways to incorporate it into a busy lifestyle, teaching people things like how to get the most out of a slow cooker or how to do quick and easy preservation.”

Root Cellar Columbia just relocated to 1005 Park Avenue, across the street from Café Berlin. It was an easy decision made out of necessity by the Davises — they simply outgrew their former space on Walnut Street. “We of course could have moved to a more commercial part of Columbia, but staying in the North Village Arts District was important to us,” Jake says. “It’s about community and continuing to rebuild downtown, which is part of our personal mission.”

When asked about their next steps, Jake says: “Really our goal for the future is to build community around good food. It’s the only way to grow the good food movement. Our business is built on being authentic, so we’ll continue to look for opportunities to build that community with authentic products and services.”

Authentic, indeed. It doesn’t get more luxurious than that.

The Davises purchase the store and begin their local food subscription programs.

Columbia location moves to renovated warehouse at 1005 Park Ave., across from Café Berlin.