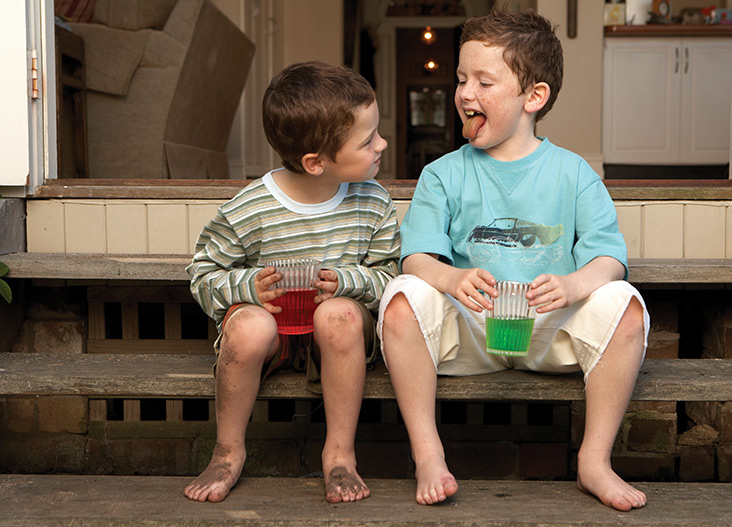 First and Goal: How MU Athletics Can Help Turn the School Around

Embracing a life of bodily fluids and practical jokes.

I can hardly suppress the giggles. Sitting alone at my desk, they’re working their way up from the inside. Bubbling to the surface, trying their best to escape out the side of my mouth, the corners turned up in a smile. Maybe I’m easily amused, but the word evokes so many silly memories.

Recollections of burps, and farts, and bodily fluids. Remembrances of poking, teasing, and practical jokes. My thoughts drift back to the preschool years, where I should have gotten an inkling of what was to come.

“Who’s making that smell?” I remember myself reading aloud. “Uughh! I’m feeling so unwell. Is it Ben or Annabel?” As I flipped the pages and opened the flaps of a favorite Usborne book, the anticipation grew as each page displayed a new character creating an unusual aroma – painting, baking, or spraying perfume.

As I reached the final page, my youngest was beside himself – arms flailing, legs kicking, laughter erupting. “Who’s making that smell? Pooohh!! Hey Ben where’s Annabel? Oh, I can hear her yell.” He’d point for me to open the flap to reveal baby Annabel making a mess in her diaper while the remaining characters held their noses. His hands would fly to his mouth attempting to hold in the giggles. “Again! Again!” he would plead, and we would start the entire process over.

Apparently, the fascination never grew old. During the teenage years, I opened my phone to find “Don’t forget to poop!” listed on my calendar every Tuesday from 9:20 to 10:20 a.m. My oldest had invited his brother to the appointment as well. I guess it was more fun for him to imagine us pooping in sync.

And then there were the random brightly colored post-it notes he displayed around my bedroom that simply read “poop.”

On yet another day, a black and white photo of an elephant releasing the mother lode showed up as the wallpaper on my phone.

The fun continued with the writing of “poop” in the chocolate icing on a cake we were taking to a friend’s birthday party. My son thought a fellow mother of boys would get a kick out of it, or so he said. Thankfully, she did.

Another time he programmed a handful of words in my phone to auto-correct to something else, so every time I typed “crap,” it changed to “Huzzah!” I guess it wasn’t lady-like for his mother to text “crap”!

For 10 years, even our dog was a boy. And you can guess what my main job was in that relationship.

Is it any wonder that I like lace, and bling, and Vera Bradley bags? That I yearn to spend time with my girlfriends and plan a monthly escape to the spa? Or that I painted my bathroom pink?

And to their credit, occasionally, to redeem themselves, they give me a nicer surprise. A gift, a bear hug, or maybe a card like the one I received at Christmas, which featured a gingerbread woman and a gingerbread man who was missing half his face. “Well, you ASKED me if that icing makes your butt look big,” it read. “You didn’t have to bite my head off!”

Inside, nicely scribed, were the words “I love picking on you.”

And so the relationship goes. A mother and her boys. The love languages of humor, sarcasm, and references to bodily functions.

And yet, as my oldest prepares to move out and my youngest starts his senior year of college, a tear forms in the corner of my eye. I can’t help but wonder — how will our relationship change? And how long will it still involve poop!?