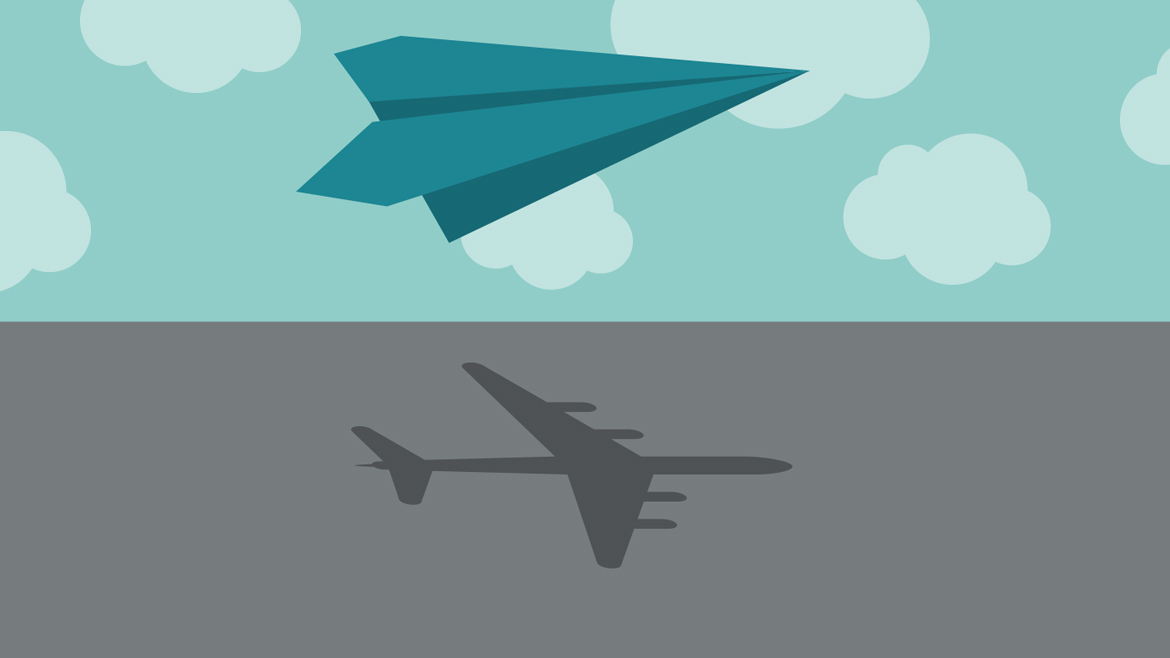 “Columbia, I told him,” she says. The speaker was intrigued.

“Oh really,” he said. “You know, I flew in to some little airport there about 15 years ago. Where would I fly in now?”

“I told him he’d still fly into the same airport, but it’s a lot different now,” Schneider says. “I told him about the terminal project and the new airlines —  he was very excited.”

These are indeed exciting times for air travel in Columbia — in August, the city will begin offering direct flights to Denver through United Airlines, finally reaching a long-sought third major hub after securing direct flights to Dallas–Fort Worth and Chicago in 2013. The airport itself, while continuing to fill flights and increase passenger counts, is improving and lengthening its runways, making way for bigger planes coming in more often. And the City continues to collect money to build a new terminal, thanks to a lodging tax increase passed handily by voters last summer.

In 2002, the year Schneider’s guest speaker last flew into Columbia, he would have had to fly to St. Louis first before hopping to COU on a Jetstream 41 (a fairly small plane). There were a little over 23,000 enplanements at COU that year. In 2016, there were nearly three times that many — 64,231, by the airport’s count. With additional service to a western hub, it seems certain that COU will rack up several thousand more than that; it’s not totally unrealistic to think that, once the new terminal gets built (which probably won’t be until the early 2020s), 100,000 people might be flying out of Columbia each year.

But just 10 years ago, barely 9,000 did. The airport was dead. It was hard to sell an airline on having any sort of significant presence in Mid-Missouri. So what happened?

The record for annual enplanements out of COU still stands at 67,588. That was in 1978, the last year of the “Golden Age of Air Travel,” in which the government regulated which places airlines would be flying and how much they would be charging, leaving the carriers to compete mostly on luxury amenities. For those flying from, say, Los Angeles, that often meant mid-air piano lounges and champagne, but for many in the middle of the country, flying at all was luxury enough to drive 67,000 people on board in a year.

But 1978 was also the year the Airline Deregulation Act passed through the U.S. Congress, and in 1979, air travel became a more or less free-market industry. It opened up air travel to the less wealthy people, but it didn’t have a great effect for COU and other regional airports like it. Enplanements fell off by 10,000 in the first year and were nearly halved by 1982. Following a brief rally in the mid-’80s, the downward slide continued, slowed mildly by the Essential Air Service federal subsidy program, until the low-point of 9,090 in 2007.

In 2008, Northwest Airlink began offering short flights to Memphis out of COU, which wouldn’t have mattered much except that Northwest was bought shortly after by Delta Airlines, one of the few remaining “legacy carriers” in the industry (American and United among the others). Under Delta, COU began offering flights to Atlanta, one of the busiest airports in the world. Ridership numbers shot up to the high 30,000s; at the same time, students were pouring into MU from out of state, and Columbia’s population crossed the 100,000 threshold in the 2010 census and kept climbing. Setting up in Columbia began to seem like a better and better option for airlines, and the city knew it.

“It’s very enticing to companies that they can get basically anywhere in the world from Columbia,” says Matt McCormick, president of the Columbia Chamber of Commerce. “The people going back and forth — from vendors to customers to employees — are saving a huge amount of time.”

The city made air access a centerpiece of its economic development strategy, and community leaders began talking with businesses around town about the positive impact that increased air travel could have on the local economy as a whole. In 2012, they put their money where their collective mouth was.

A revenue guarantee, in and of itself, isn’t really a new recruitment tactic; what was new is how Columbia funded it.

A revenue guarantee is a form of public-private partnership — an easy example to illustrate would be a toll road. Say a town needs to build an expensive road, but they don’t quite have the means to do it alone. They reach out to Private Company X to help build the road in exchange for the revenues from tolls that Private Company X installs. Private Company X is interested, but not sold. What if no one drives on the road and, thus, no one pays the toll? The city could issue a revenue guarantee of, say, $500,000 — that would mean that if drivers don’t generate $500,000 in revenue by driving on the road, the city will pay the difference. If drivers only pay $400,000 in tolls, the city pays Private Company X $100,000. Easy enough.

In 2012, Private Company X was American Airlines, but the city wasn’t technically Columbia; it was the Central Missouri Air Service Fund, a group comprised of the governments of Columbia, Jefferson City, Boone County, Cole County, MU, and a group of more than 40 private businesses. The fund offered American Airlines a revenue guarantee of $3 million for air service to Chicago and Dallas–Fort Worth.
Columbia offered $1.2 million; the rest of the fund was covered by partners in different proportions based on size and their potential return on investment.

The Central Missouri Air Fund was largely assembled by REDI, who brokered the deal with American, and the Chamber, which recruited the private partners. Private contributors to a revenue guarantee aren’t unheard of, but they are rare, and they’re exceedingly rare for an airline.

“During the first [Chamber leadership] visit to Knoxville, we had a meeting with their airport people,” McCormick says. This visit was in 2014. “They said, ‘You know, we credit y’all — you changed the game. When you started bringing private business in to help fund the revenue guarantees for airlines, you changed the game and airlines have really responded to that.’”

Of course, it makes sense for non-government entities to want to play a part in bringing in air service that’s going to help them. The most obvious beneficiary of airline service to Chicago and Dallas was MU, who recruits students heavily from those cities. That’s not mentioning another jewel in the city’s economic development crown: the MU Research Reactor, which can turn out delicate medical isotopes that rely on air travel to get around the country in time to be used.

“University researchers and entrepreneurs are served greatly by a strong airport,” MU spokesman Christian Basi says. “Investors and companies of all sizes and types, including startups, rely heavily on the ability to receive and send materials with reliable transportation alternatives.”

American Airlines loved the deal, and it’s been successful for all parties involved; since having to cover $22,562 after the first few weeks of service with American, the fund hasn’t been touched, accruing more than that in interest in the two years it was in effect. For a brief window of time, it seemed like Columbia was going to have service to Chicago, Dallas, and Atlanta — COU would have three major international hubs, only a few years removed from federal life support.

But alas. Delta was irked that a competitor had gotten incentives to enter their existing market, and they announced that they would stop service from Columbia shortly after American started. Delta said they were losing money on COU; the city offered them the same revenue guarantee they’d given American, but Delta turned it down. So the City didn’t get the three hubs it craved. It had, however, arrived at a pretty effective way of finding another one.

“Personally, for me, I feel like I’m on a lot better footing this time because I understand the process a lot better than when we went after American,” Schneider says. “I was about as green as you could be when we first started that.”

As part of the agreement with United, the Columbia CVB is doing $250,000 worth of marketing for the Denver flight. Denver, Schneider says, is a particularly good market for Columbia. It has a big MU alumni base and many of the same demographic interests as Columbia — when we spoke, Schneider was talking to a craft beer magazine in Denver called Thirst about marketing Columbia’s own beer scene to Denverites.

The incentive package for United’s Denver flights (they’re also adding two Chicago flights, which aren’t covered in the package) is smaller than what the city put together for American in 2012. In addition to the marketing, the City is waving up to $125,000 in facility fees and, thanks to the re-establishment of the Central Missouri Air Service Fund, has a $600,000 revenue guarantee in place.

“This round was — well, I don’t want to say it was easier, but what we did have was the success of American Airlines and the success of the airport over the last four years and how they’ve been able to increase the size of the planes,” McCormick says. “These companies have experienced that success. They’ve seen it. They’ve flown it.”

Indeed, despite losing Delta and access to a third major hub along with it, COU’s last few years have been its most successful in decades — maybe ever. Enplanements increased by 66 percent between 2012 and 2016. Ridership numbers are the highest they’ve been since deregulation, and with the added flights to Denver, it’s nearly certain that the airport will break its 1978 enplanements record either this year or next. And there will be even more space for more planes when the new terminal is built. All this for an airport that was dying a decade ago. The mobilization of Central Missouri Air Services Fund has, in effect, created a new ecosystem for air travel in Missouri out of nothing. There’s enthusiastic support for the system of revenue guarantees the city has built — the only limits now are how much air travel Columbia needs.

“It’s really just a conversation between many people,” Schneider says, “but it’s about asking ‘Is this good for the community, and can we make it successful?’”