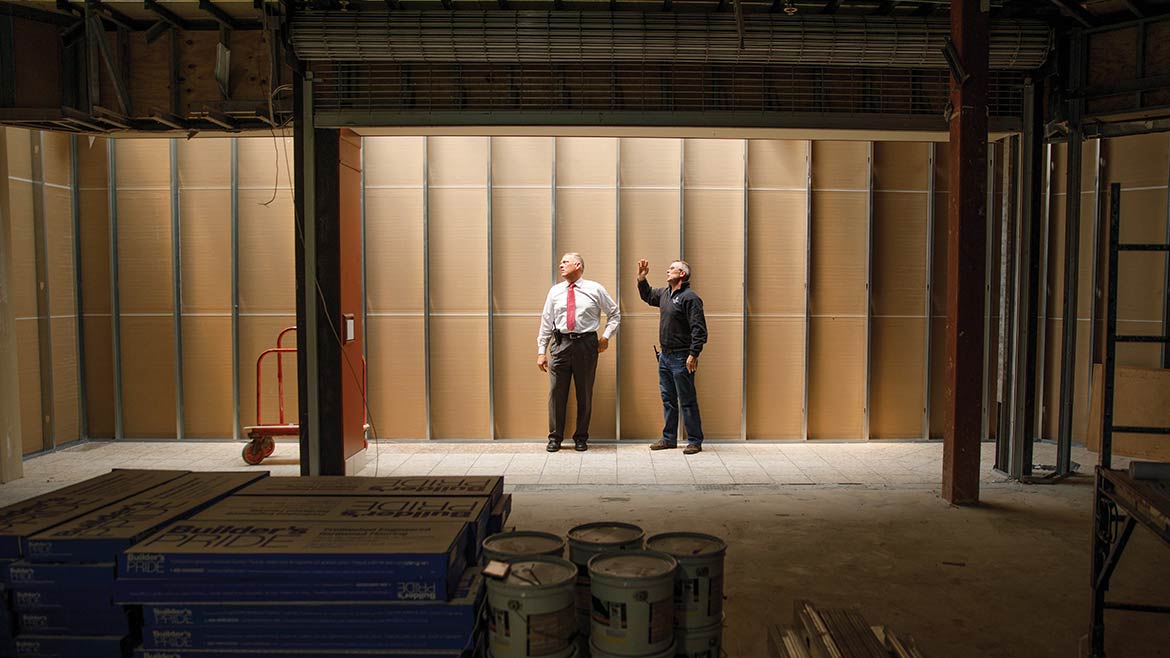 As senior general manager of Columbia Mall, Rusty Strodtman is used to getting questions about the next big retailer coming to Columbia. Is there a Whole Foods coming? What about Cheesecake Factory? What about Forever 21, the retailer Strodtman says they probably get the most requests for?
“The biggest thing we can do as a mall owner is bring in new stores,” Strodtman says. “That’s what attracts people more than us marketing, it’s more than us planting flowers. All that stuff’s important, but the retailers matter. If we don’t have the retailers, it doesn’t matter how pretty our flowers are.”
With the ongoing growth of online sales, Columbia Mall, owned and operated by GGP, is looking to diversify vendors and provide a mall full of relevant retailers that will also keep customers longer and provide them with experiences they can’t get online.

A New Kind of Mall

Online sales continue to hurt brick and mortar throughout the country, but Strodtman says the Columbia Mall is at 92 percent occupancy. Across the company, GGP’s occupancy rate is about 94 percent. According to Business Insider, the national vacancy rate was 7.9 percent in the first quarter of 2017.
“The retailers are utilizing brick and mortar as a mechanism to help with their online shopping,” Strodtman says. “Seventy-five percent of online shopping has a brick and mortar connection. So the retailers know that they have to have a brick and mortar presence to help with that online portion, and so they’re trying to figure that out.”
But nationwide, malls are increasing efforts to provide offerings consumers can’t get online — experiential entertainment. This trend extends all the way to GGP corporate. CEO Sandeep Mathrani was inspired by a trip to Dubai Mall, where he encountered KidZania, an indoor city for kids to play in, complete with restaurants and police stations. GGP, which owns 126 retail centers in the U.S., is partnering with KidZania to build activity centers in Dallas and Chicago malls over the next two years, according to Bloomberg.
One strategy to make Columbia Mall more of a destination is to enhance food offerings. Strodtman says there’s demand for three to five sit-down restaurants in the mall parking lot that would, if they added more parking, increase evening activity and attract couples and families to the mall while they’re waiting for a table. 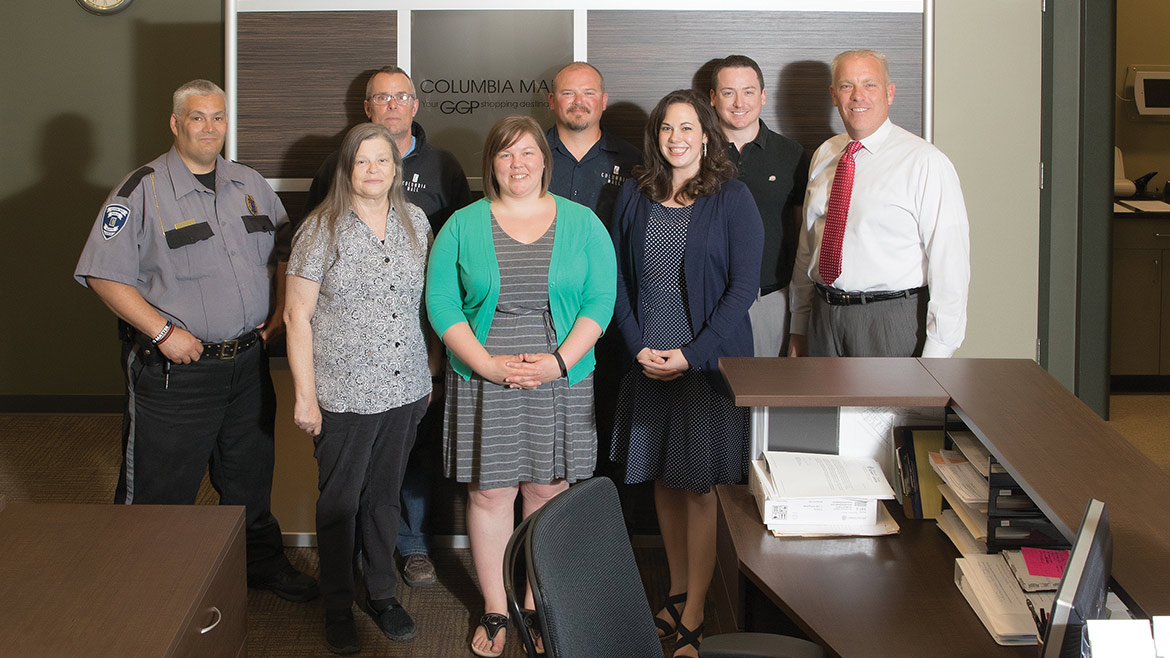 They’re also looking to increase local options in the food court and stray from the fast food chains that have dominated malls for decades. Consumers want something they can’t get anywhere else.
Falafel Café is a local food court resident. Strodtman says he wasn’t sure initially if a local place could do the volume to be successful, but they’ve had great results.
Strodtman also wants to increase entertainment opportunities at the mall. Gaming and restaurant centers, like Dave and Busters, are a growing trend, as are bowling alleys with a restaurant. “We’re looking for something that isn’t retail and isn’t shopping necessarily but would be complementary to shopping,” Strodtman says.
The mall’s ideal client is a 35-year-old woman with three children, so in addition to existing amenities like the indoor playground, nursing room, and family-first parking, anything they can do to attract families is part of their goal. They’ve been a strong proponent of attracting high school activities to Columbia, like MSHAA events, the Show-Me State Games, and Future Farmers of America events. Columbia recently secured the MSHSAA State Musical Festival for 2018 to 2022, which the mall supported financially to offset festival costs.
Those events pack the mall. “Most of the kids are coming from small towns that don’t have malls,” says Stephanie Smith, property management associate at the mall. “They’re going to experience the [big] city.”

There are always a few retailers shuffling around in the mall. Victoria’s Secret just wrapped up an approximately $3 million store remodel and re-opened with the newest store prototype. Tradehome Shoe Store relocated and expanded into two spaces, Mr. Bulky candy shop re-opened and expanded in a new space near the food court, and AT&T and MetroPCS have opened new stores. 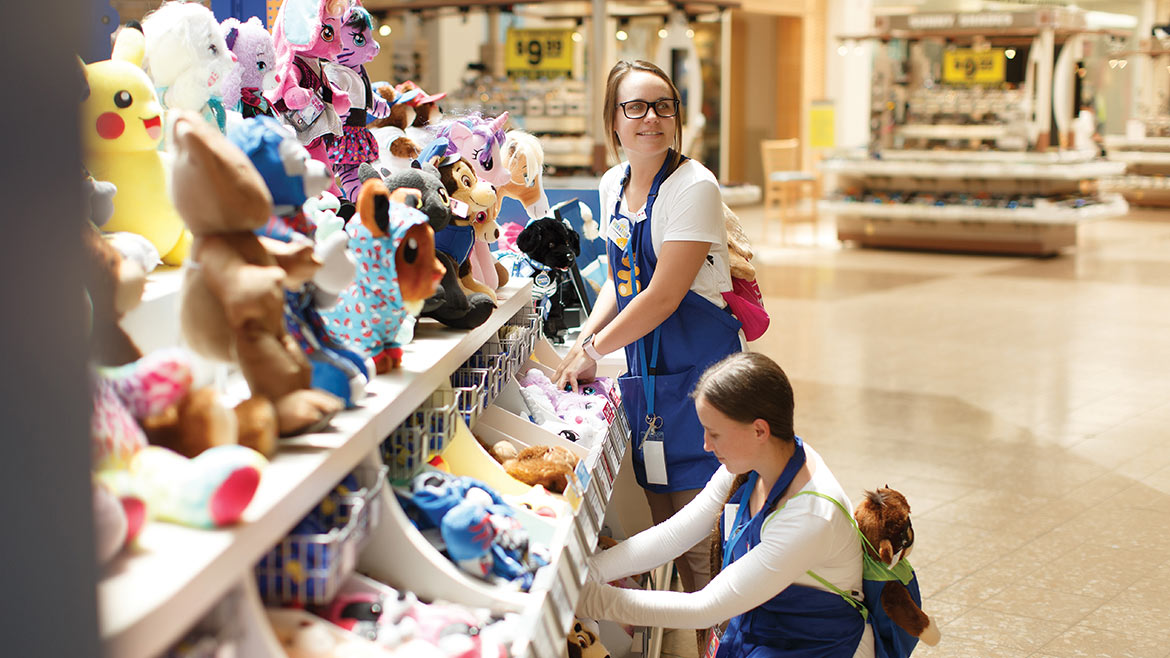 In 2016, the mall was one of three test kiosk sites for Build-A-Bear Workshop, an opportunity for the company to operate in smaller markets. The test was so successful the company is rolling out kiosks in over 20 malls nationwide.
Columbia’s Build-A-Bear kiosk has a prime location in the center of the mall, now called “Build-A-Bear Court,” and the GGP staff added small tables for birthday parties to specialize the space for Build-A-Bear’s needs.

Change keeps consumers coming back to the mall, and the staff is trying to capitalize on that with a new pop-up storefront that can be rented for a month or even a single day, Smith says.
In this pop-up location, located next door to Victoria’s Secret, the mall will provide the fixtures, cash register, and basic store necessities and rent out the space. Clients could include someone testing a product, or someone with a home-based business looking to capitalize on a certain time of year, like Mother’s Day weekend.
Pop-up stores can be a good place to sell fad items, like, most recently, fidget spinners: It’s a way to make fast cash on a hot product and not be tied down to selling it once it loses popularity.
“As a customer, you’re intrigued to come back and see what’s coming, because you’re not sure who that next retailer is going to be,” Strodtman says.
Temporary leases are a growing source of revenue for the mall. The calendar kiosk, which pops up around the winter holidays, and Halloween stores can fill an empty space and be successful for a short period of time. Smith says they’ve even transitioned some of those retailers in the “incubator phase” to permanent leases. Nic Parks, owner of The Pinball Company, opened The Arcade in the mall last year and started as a temporary tenant. Since then, he’s signed a permanent lease and moved into a larger space. 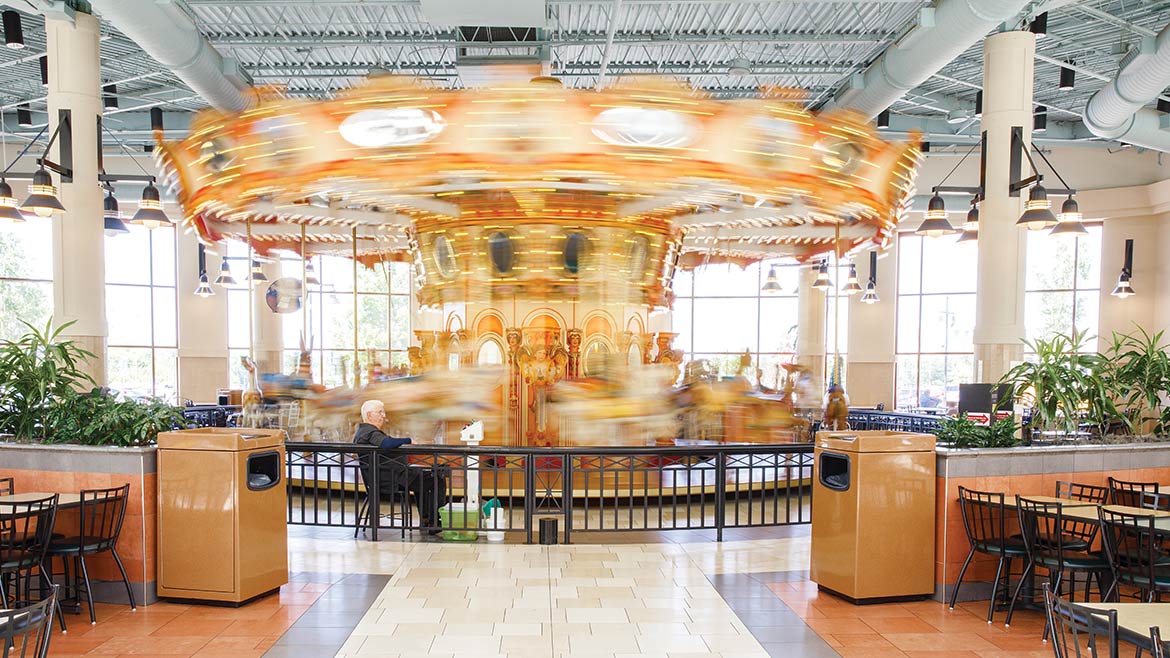 The Mall received the 2017 Mayor’s Climate Protection Agreement Award for emissions reduction. Incorporating LED lights into 95 percent of light fixtures since 2009 has decreased emissions by 26 percent, or enough to power 181 homes in the community for one year. “GGP is committed to being an environmentally responsible company,” Smith says. They’ve cut down lighting in service corridors and utilize low-flow faucets in restrooms, which cut sink water usage by 50 percent. Now they’re working to encourage retailers to be more environmentally friendly, switching to LED bulbs and encouraging retailers to turn off lights and ventilation when stores are closed.
In 2016, they diverted 27 percent of waste away from landfills. The mall’s sustainability team is focusing on increasing trash diversion, especially with wet trash created by food court vendors. They’re looking for ways to recycle or compost those materials. As one of the largest buildings in Columbia, Strodtman says it’s important to be an eco-leader.