Home » What’s So Special about a Solar Eclipse?

In about two minutes and 30 seconds, you can listen to half of Bonnie Tyler’s ballad “Total Eclipse of the Heart” — or you can experience a total solar eclipse for yourself.

“People say ‘once in a lifetime’ about events quite a bit,” says Megan McConachie, strategic communications manager for the Columbia Convention and Visitors Bureau. “This is absolutely, genuinely once in a lifetime for Columbia.”

Around 1:12 p.m. on Monday, August 21, the city of Columbia will witness a celestial event, a total solar eclipse. The moon will pass between the sun and Earth and block the sun, casting a shadow over the city.

Totality is the place to be

This is the first total solar eclipse on the continental U.S. since 1979, and the first total solar eclipse Missouri has seen since 1869, says Angela Speck, MU professor of astrophysics and director of astronomy. The particularly stellar part of this eclipse is that Columbia is in the path of totality, which means that the city will experience “full-moon darkness,” where the moon is completely covering the sun.

Angela has been waiting since she was five years old to see a total solar eclipse. Now, she serves on a national task force that’s planning for the event across the country.

“It will feel like a normal day,” Angela says, “until the sky goes completely dark.”

As the moon gets closer to passing over the sun (about 30 minutes out from darkness), the sky will look like there’s a storm coming. When the sun gets about 80 percent covered, enough light will be gone to make the sky go a little darker, the way it does just after sunset. It will continue to get incrementally darker for the next 30 minutes, right up until the sun is 99 percent covered.

Then, Columbia will go dark. “When it’s completely covered, it goes to full-moon dark in seconds,” Angela says. “Even if you’re not paying attention, you’re going to experience it because it’s going to go from not noticing it to, ‘Oh the sky’s a bit weird’ to, ‘Oh my God, it went dark.’”

Columbia is large enough that the darkness will last between two minutes and 33 seconds to two minutes and 37 seconds, depending on where one is in the city. A red tinge of hydrogen will show briefly, until its density goes too low. The sun’s corona, which will look like a glowing ring of light around the moon, will then be visible, and then the stars, and at least three planets. The stars behind the sun make up the constellation Leo. Angela says, “The brightest star in Leo in Regulus, so this is going to be a big deal for ‘Harry Potter’ fans because Regulus is [Harry’s godfather] Sirius’ brother.”

While the sky is dark, animals will behave as they would in nighttime. “If you’ve got an insect that chirps at night, it will start chirping,” Angela shares. “Birds that sing at night will start singing.” Flowers that close during the night will close, and the temperature will drop as well. And then, a few minutes later, it’ll be a bright afternoon. 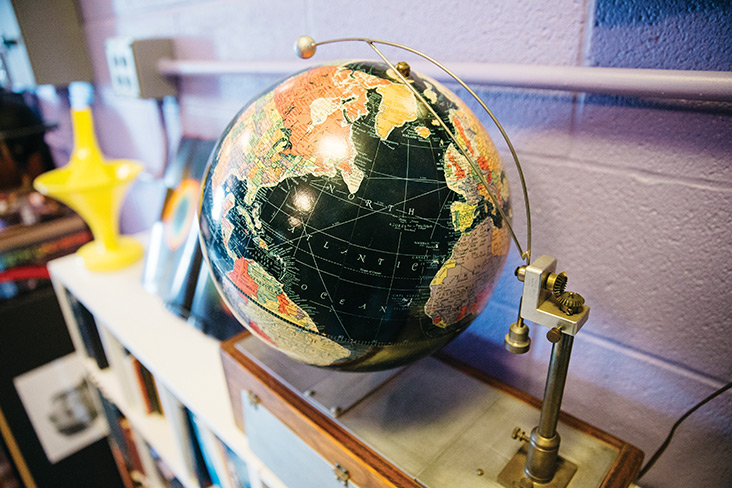 A local and national spectacle

Thanks to astrono-tourism, the United States is predicted to double its population for the eclipse, and Angela believes Columbia will more than double. Eclipses often occur over oceans or other low-density places that are hard to travel to. “Most people never get to see this, and here’s one that’s on our doorstep,” she says. Columbia is close to the middle of the path, which experiences the longest amount of time in darkness. Many hotels in the city are already booked for the eclipse.

The Convention and Visitors Bureau received the first inquiry on the eclipse a few years ago. “I remember hearing Rachel here in our office hang up the phone and be like, ‘Someone just called here from London asking about the eclipse,” Megan recalls. “I was like, ‘London, London? Like the real one?’” Since then, individuals, families, and organized groups from across the country have chosen Columbia as their eclipse-viewing destination. An astronomy club from Boston settled on Columbia as their observation site after a long search.

Megan explains that Columbia is an ideal location for viewing because the city is experienced at throwing festivals and has the capacity to host a large amount of people. Columbia is also an ideal destination to travel by car — easily accessible from St. Louis or Kansas City.

Columbia’s destination tagline is “What You Unexpect,” a nod to the humble expectations visitors may have of the city and their pleasant surprise upon realizing everything Columbia offers. In the fashion of True/False Film Festival, Roots N Blues N BBQ Festival, and MU Homecoming, Columbia is gearing up to show visitors and locals alike a cultural and educational experience during the eclipse.

The CVB has teamed with Columbia Parks and Recreation to plan events leading up to the eclipse and viewing events on August 21. “People should watch as everything unfolds and events are more solidified,” says Karen Chandler, superintendent of recreation and community programs for Columbia Parks and Recreation. “We’re trying to tie these things in and make it a week or weekend event to enhance the eclipse itself, so the people coming into town will have a variety of things to do.”

The eclipse will present an opportunity for locals to interact with a diverse array of visitors, all united in one place for a special event. “This is unlike anything Columbia has ever seen before, or will see while any of us are still alive,” Megan says. “I think it’s really going to be something that the city can remember and be proud of for a long time.”

Make the most of the experience. See list of weekend events and viewing options here.