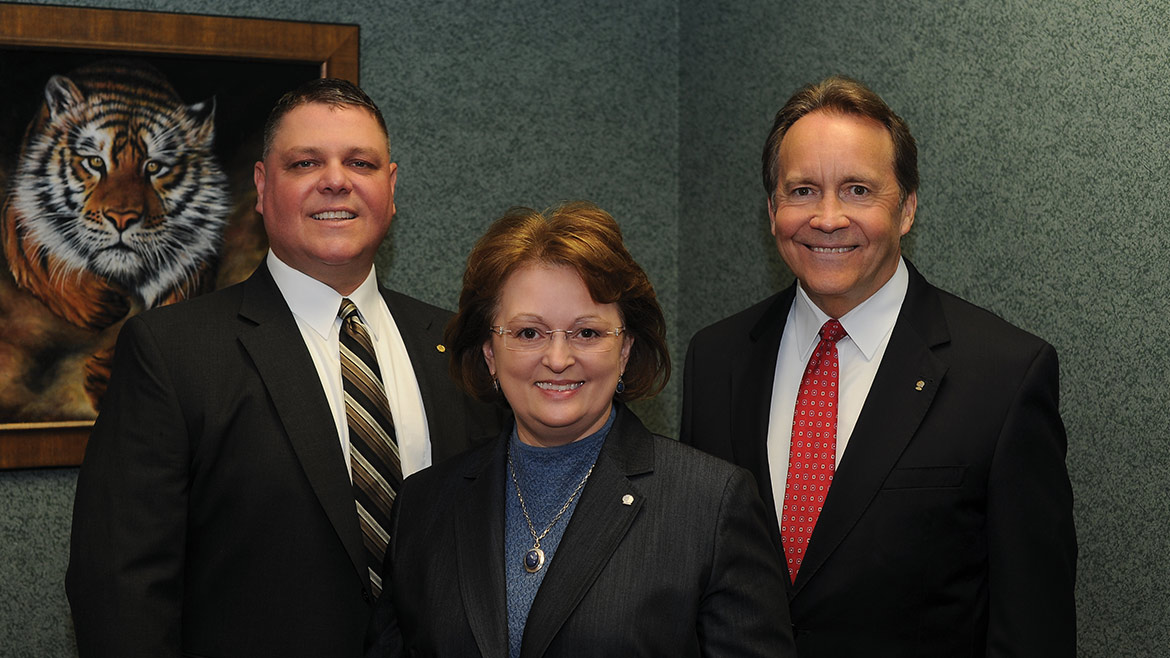 It’s a Thursday morning, and the executive team of The Callaway Bank is gathered around the conference table at their West Broadway location.

This board table is a place they find themselves regularly, a place where decisions have been made over the years, and it shows. Made by Elliot’s Custom Cabinets in Fulton, the table has had a productive life, and it bears the marks of the company’s quest to uphold its legacy as the oldest independent bank west of the Mississippi. Every dent and scratch tells a story.

Today, the team congregates around it once again, this time to relive the history for their 160-year anniversary and celebrate the values that are still pushing them forward.

Built from the Past

Opened in 1857, The Callaway Bank has survived the Civil War, The Great Depression, both world wars, the Great Flood of 1993, and the financial crisis of 2008.

Kim Barnes, president and CEO, recounts the Civil War’s effect on the bank. “The founding fathers were scared about the unsettled nature of things, so they took the resources of the bank and, under the cover of night, sunk the gold in a nearby well to protect it,” she says. The money remained there for a few years until the well was pumped dry, and all but one small coin was recovered.

While sorting through historical documents, Barnes recently found the original telegram notifying the bank to cease operations for three days during the Great Depression. “It even had the original paper clip attached to it,” she says.

“You have to appreciate where you came from, your roots, in to order to think strategically and know what the future looks like,” says Barnes. She believes the common thread throughout the bank’s history is its progressiveness and innovation. “It’s caring for the client and doing it in a community-minded, humanistic way. You don’t get mired in sentiment, but you honor your roots to build on what’s next. It’s stewardship.”

“This bank is 160 years old, and we’re the keepers of it,” adds Jeff Jones, chief communications officer. “We’re stewards of the institution.”

“But it’s stewardship with a passion,” Public Relations Director Debbie LaRue says. Barnes agrees — it’s the company’s code of ethics, its set of core values that make it sustainable. Those include fairness, honesty, integrity, and innovation, and they were embodied by their former CEO, the late Bruce Harris.

Barnes says Harris was approachable and engaging. He led the bank for 13 years before losing a battle with lung cancer in December of 2012.

“Bruce knew that, to stay viable, the institution had to adapt. That’s what would make it thrive,” Barnes says. “His goal was to make an institution that could survive past any one of us.”

Harris’ vision guides the current leadership team and translates into a spirit of innovation that permeates their culture. “We were the first bank in Callaway County to do ATMs, drive-in locations, debit cards, image checking, and a debit card reward program,” Barnes says. “We figure out what we need to do and we go do it.”

They were also the first bank to loan money for student projects. Barnes, who started 30 years ago as the lobby receptionist, recalls the time a grandmother brought in a student requesting a loan. He needed $85 to buy a goat and goat food for his FFA project. “This was post 2008, so there were rules and regulations,” she says, “but the lender thought we needed to do something.”

Barnes agreed, and she figured that if one student needed help, so would others. Within 45 minutes, the team had set aside a sum of money and created the Youth Entrepreneurship Program, or YEP for short. “Now when a student comes in and says, ‘I need some money for a project, can you help?’ all we have to do is say YEP!” Barnes says.

Over the years, the bank has added additional services as they’ve seen needs arise. Boone County Market President Gary Meyerpeter recalls the time he met several business owners who wanted to use the bank’s services but lacked a convenient branch location.

“Bruce thought about the problem, and then he asked, ‘Well, why couldn’t we go to them?’” Meyerpeter says. So the bank created a courier branch that continues to service four routes and between 75 and 100 customers today. “The service is so valuable for our customers because they can stay in their store,” says LaRue. “It was a very innovative idea.”

Whether it’s creating a customer care team, adding a local shopping aspect to their debit reward program, developing a seminar to help businesses become more profitable, or starting Callaway Kids’ Bank, The Callaway Bank works to remove barriers between them and their customers.

“We’re not transactional,” Meyerpeter says. “We’re in it for the long haul. I think that’s one thing that sets us apart.”

Moving into the Future

Meyerpeter will retire on August 31, making way for a new period in the bank’s history. Senior Vice President Josh Stephenson has been selected to take his place.
“My time at The Callaway Bank has been a very positive experience,” Meyerpeter says. “But Josh’s network is unlike any I’ve experienced. I have no doubt the bank will be more successful than it’s been during my tenure.”

Stephenson, whose branch office is often his truck, will continue to go where his clients need him to be. “Customers are people, not numbers,” he says. “And I’m excited about the opportunity to continue the bank’s success in the Boone County market.”

As the meeting comes to a close, the team pushes their chairs away from the table, and Meyerpeter shares a final thought. “At The Callaway Bank, it’s more about the people than me,” he says, “and that perspective makes life a lot more gratifying personally and professionally.”

The Callaway Bank through the years…

1857
The first bank in Callaway County is established in Fulton.

1930s
The Callaway Bank is one of two banks in the county to survive the Great Depression.

1960
The Callaway Bank brings drive-in banking to Fulton with a separate downtown facility.

1993
The bank merges with Steedman Bank to replace services lost to Mokane residents during the flood.

2017
The Callaway Bank has eight banking offices, 12 direct ATM locations, and over 24,000 locations nationwide through the MoneyPass Network.