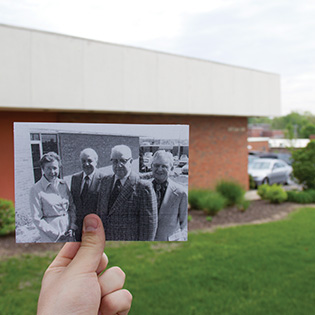 
An office space for over 40 years, 105 E. Ash has become the hub of giving and volunteering in Columbia.
Williams-Keepers, a certified public accounting firm founded 94 years ago in Columbia, used to inhabit the space and moved in 2007 to the Shelter Office Plaza at 2005 West Broadway.
About three years ago, Heart of Missouri United Way moved into the building near the corner of Ash and Providence. The red brick building sits right outside downtown Columbia near Douglass High School, public housing, and residential neighborhoods.
United Way addresses four areas that contribute to poverty: lack of access to education, health, income, and safety net services.
“United Way moved into the building as a way of being closer to the community we serve,” says executive director Andrew Grabau. “The building allows us to partner with other social service agencies such as the University Impact Center, Family Access Center of Excellence, and the Family Impact Center.”
All four are located in the same building. Working in a building with multiple organizations with similar ambitions, United Way believes it adds to their long time goal of bringing the community together with a number of social services.
Williams-Keepers and United Way have had a long-standing partnership since 1947. Williams-Keepers recently gifted United Way a donation as part of their ongoing efforts to support significant organizations that impact the lives of people in need in both the Columbia and Jefferson City communities. This donation will give United Way the ability to make upgrades to their infrastructure, specifically office space and computers.
United Way’s first improvement will be their conference room. The room will be named “Williams-Keepers LLC Community Conference Room” in honor of the donation and as an “affirmation of their partnership,” Grabau says. They’ll celebrate this partnership on May 25 at 4 p.m. with a Chamber ribbon cutting for the conference room.