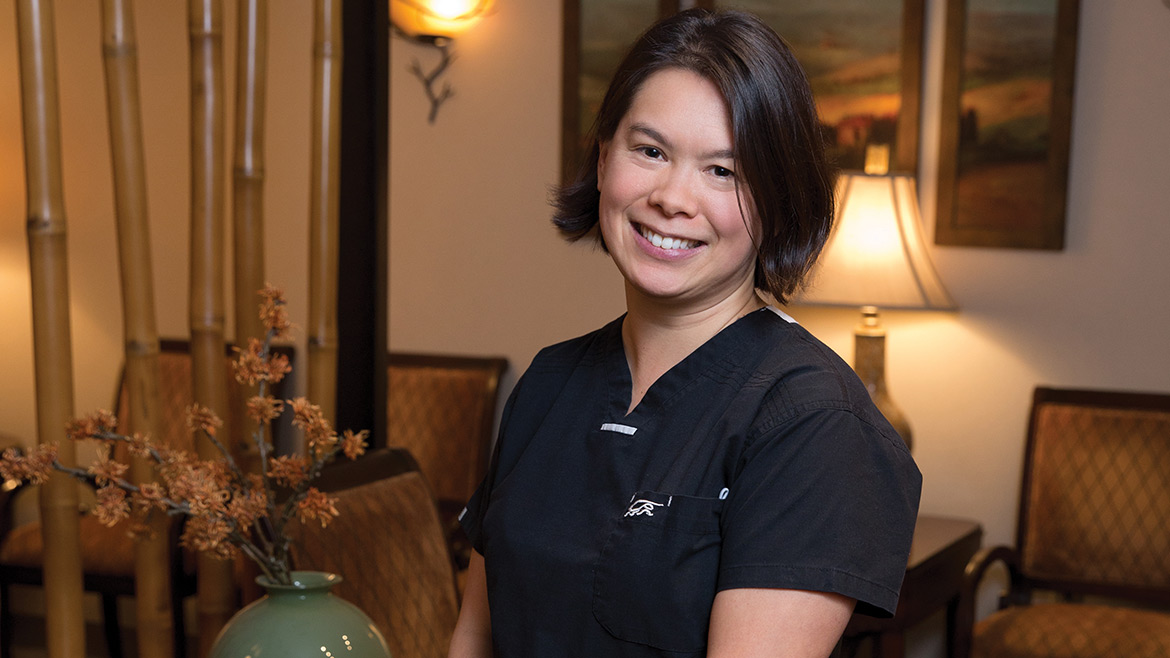 “The difference between Chinese and Western medicines is that Chinese medicine looks at the physical, mental, and emotional state of a person, since the body, mind, and spirit are inseparable,” explains licensed acupuncturist Gina Butler. “It’s a whole body approach with a customized treatment plan depending on the person.”
Butler had her first exposure to acupuncture at 19, when she was dealing with chronic pain. Her mother made her an appointment. “I did not want to go,” Butler says. “I was scared of needles and thought my mom was crazy, but Western medicine only had medication to offer me.”

The treatments had such a profound effect on Butler, who was pursing her pre-medical school education at the time, that she changed her path and went into Chinese medicine instead. Upon graduating from the Seattle Institute of Oriental Medicine, she found herself working as an associate at the same clinic where her affinity for acupuncture began.

A native of Washington state, Butler has had her practice, Acupuncture of Columbia Inc., for five and a half years. She is licensed by the Missouri Acupuncture Association and is nationally certified in both acupuncture and Chinese herbal medicine by the National Certification Commission for Acupuncture and Oriental Medicine.

“When I came to Missouri from the West Coast six years ago, I thought, ‘There is no way this community is going to embrace this,’” Butler says. “I have been shocked at the response, and not only from the Columbia community, but also from the surrounding areas. Patients drive from Jefferson City, Moberly, and the Lake to see me.”

When a patient visits, Butler determines which method to use based upon their symptoms. “Acupuncture is fantastic for pain,” says Butler. “Most of the acupuncture I do is for chronic and acute pain management. I use Chinese herbal medicine for internal issues such as sinus congestion, allergies, stomach problems, depression, and anxiety.”

Most new patients come in with multiple complaints. Using Chinese medicine, acupuncture, or a combination of the two, Butler can address many of their medical issues in the same visit.

Several of Butler’s patients use her treatments to complement conventional medicine practices, and others come to see her as a last resort after trying physical therapy, massage, medication, and injections. The number one complaint she treats is pain, followed by stress, fatigue, insomnia, and even infertility.

“Instead of chasing after symptoms, we look at the root cause,” says Butler. “For example, if someone comes in with allergies, they won’t get a generic form of an allergy formula. The medicine is very customized. A patient will come in and say, ‘I just want something for my cold,’ and I will say, ‘No. It depends upon what type of cold you have.’”

Most insurance policies in Missouri currently do not cover acupuncture. That forces Butler to maintain a cash-based practice, which is a huge disadvantage to her patients.

“It involves needles, it’s alternative medicine, and insurance doesn’t cover it. So basically, it is not a recipe for success,” Butler says with a laugh.

But people keep coming back. “Patients say, ‘I can’t believe I enjoy you sticking needles in me!’” Butler says. “The number one thing patients tell me is that they wish they would have come to see me sooner.”